Monday 8 September.
We flew from Budapest to Zurich. We went to the train station and said goodbye to Roland and Verena as they were going home. Then we validated our Swiss Train Pass, which gave us train, tram bus and ferry transport for the next 15 days without paying. We took the train to Zurich City and then a cab to our hotel. It was a cute boutique hotel, very comfortable and in the heart of the Old Town. 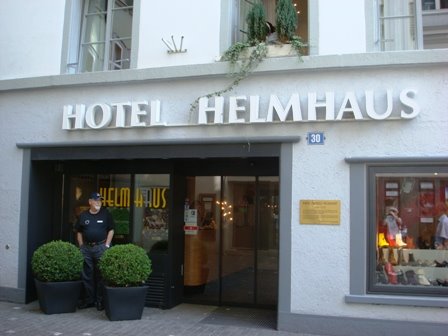 Bill was excited to be back in his homeland and couldn't wait to order a traditional Swiss meal.... 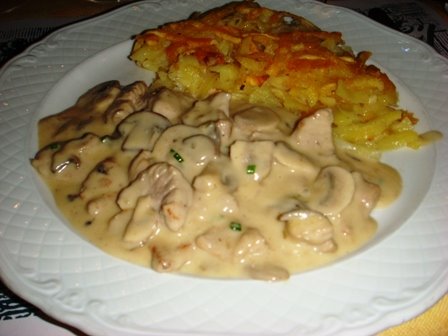 So that night we found a restaurant close by and ordered Gschnätzlets and Rösti, when we had eaten this they filled the plate again. (and we thought we would be cutting down on food now we were off the ship haha) 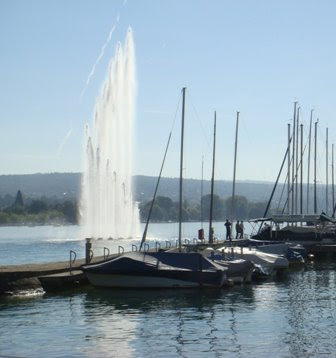 The next morning we went on a guided tour of the area. We visited the fountain in the Lake of Zurich. 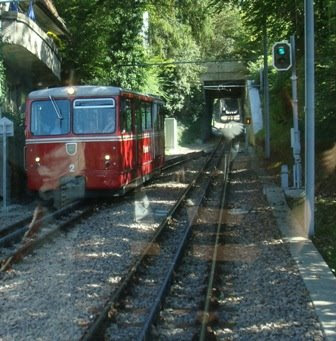 We went up to the Dolder Berg in a funicular train and looked over......... 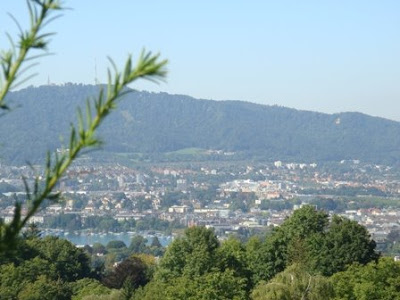 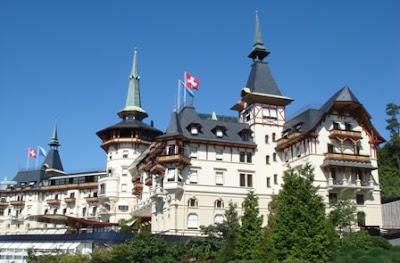 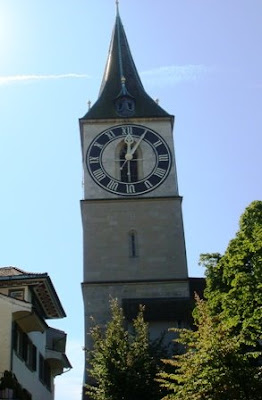 Back down in Zurich we walked around the Old Town. Then we left the tour and made our own way. This clock face is the biggest in Europe. 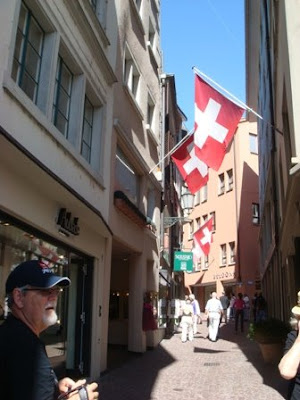 The quaint narrow streets of the Old Town, Bill couldn't get over how this area had changed from a rundown, slum area in the 60's to a clean, upmarket, trendy place to be. It was a nice surprise for him. 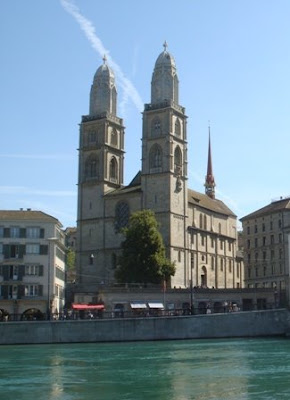 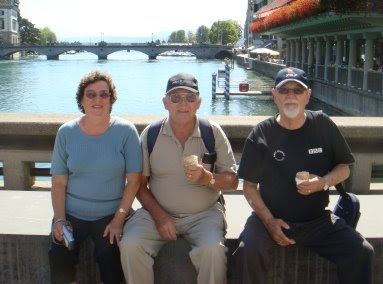 We had lunch by the river under the umbrellas in the background and then we had to buy a Mövenpick ice cream for Bill. Paul joined in.

Then we walked by the lake. It was a beautiful day and we were hoping it would stay so for when we go into the Alps. 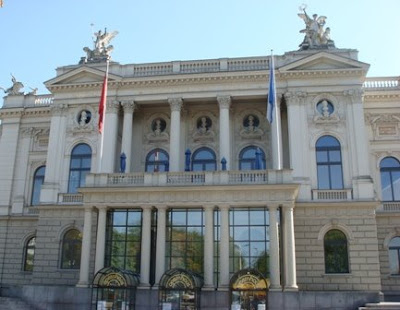 We passed the opera house on the way back to our hotel. 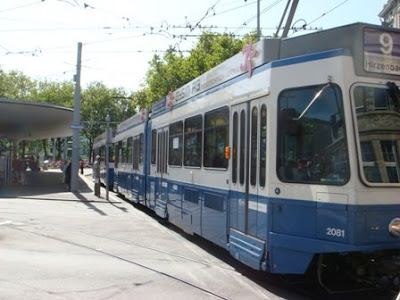 The tram stopped right outside and we went sight seeing by tram.

This was an exciting day for Bill and I as Carol-Ann, our daughter, is flying from London to spend the next 12 days with us. So after breakfast we took our bags to the station and sent them on to Spiez. Then we spent the morning window shopping before catching a train to the airport to meet Carol. 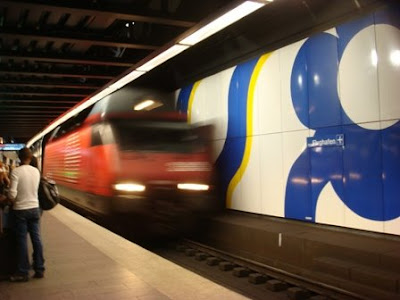 After hugs and kisses we boarded the train for Spiez. Unfortunately,Carol's husband, David, couldn't come because he is in the middle of a big job. 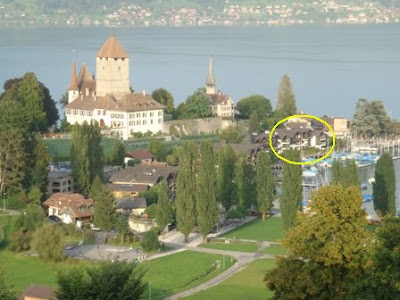 After 2 hours on the train we arrived in Spiez, a pretty little village on the Lake of Thun (pronounced Toon) situated at the foot of the Bernese Alps. Our hotel (circled) is on the lake edge in front of the castle. Unfortunately the Alps were hiding in mist. 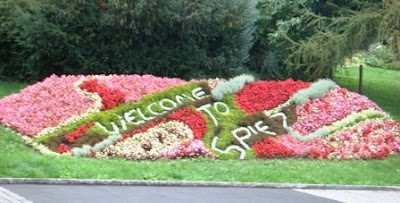 On the way down the hill to the hotel there were lots of beautiful flowers. 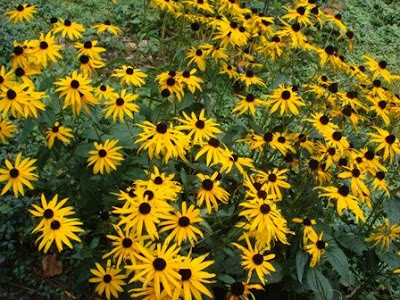 When we arrived at the hotel we met my brother and sister in law, who had come by train from London to spend the next 6 days with us. We were all very excited to see one another again and we became a very noisy crowd of seven in the restaurant of the hotel.


Thursday 11 September.
The next day we awoke to a rainy, overcast day...just what you don't want when sightseeing in the mountains. 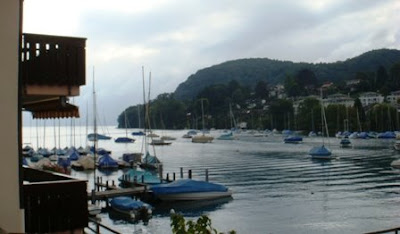 This is the view from our balcony, Hiding behind the clouds are the three huge mountains in this region, the Eiger, The Monch and the Jungfrau. 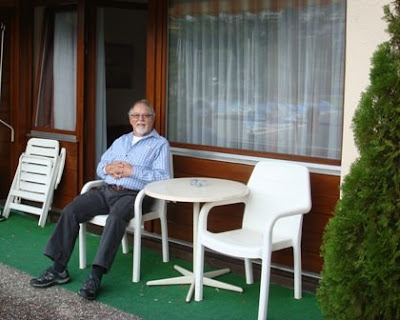 A park to the side of our hotel. 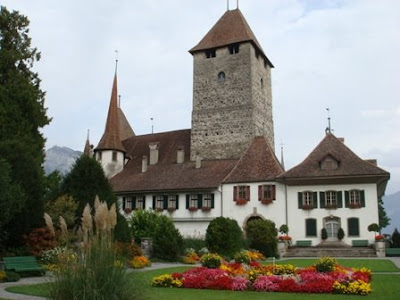 The castle behind the hotel, where Carol and I started a walk up the hill...... 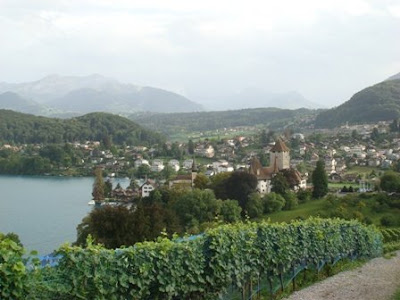 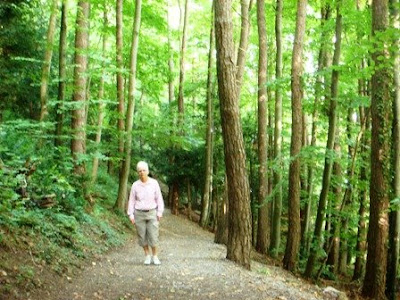 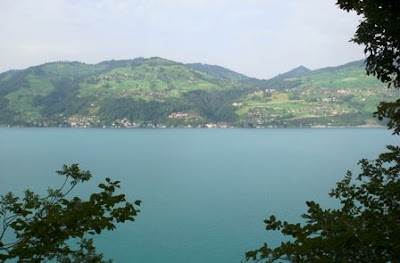 ....to the top of the hill overlooking the lake... It was magic! (The rain had cleared a little)
Posted by diane b