BIRTHDAY BEAR OR IS IT PANDA BEAR

It was Chris and Bob's birthdays recently and our little Birthday Bear Group celebrated both their birthdays on the same day because they live quite a long way out of Brisbane. However, they came down to the suburb of Redcliffe where we had a delicious lunch at Preece's overlooking the pier and bay.
Chris and Bob have just been to China for a holiday so Ann and Helen dressed Birthday Bear appropriately. Bear morphed into a Panda Bear for Bob and later Bear became a tourist visiting the great Wall of China and the zoo for Chris. 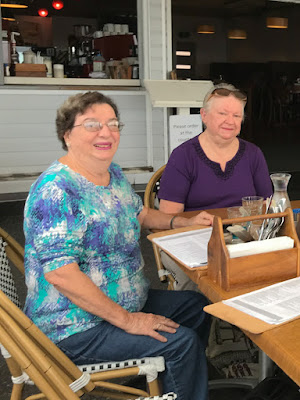 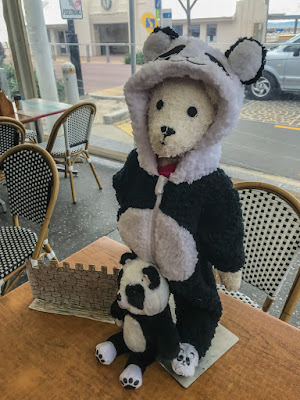 Helen and Ann dressed Bear in  Panda Bear suit to remind Chris and Bob of their trip to China. 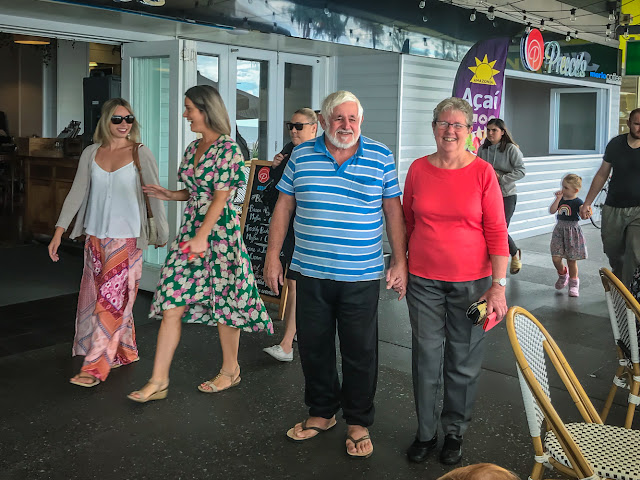 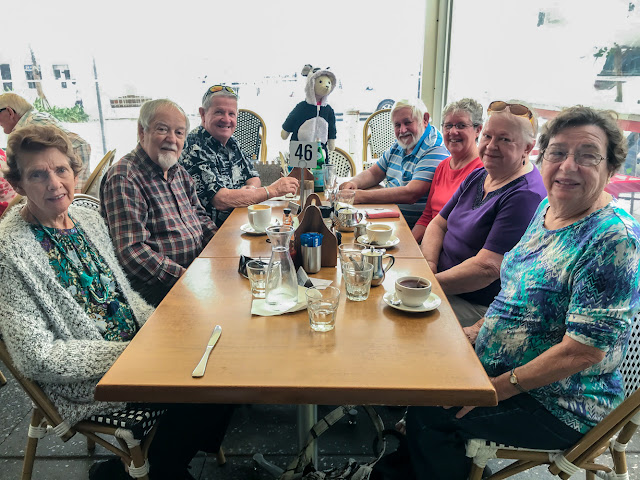 Mary, Bill, George, Bob, Chris, Ann and Helen then I swapped places with Ann from behind the camera for the next pic. 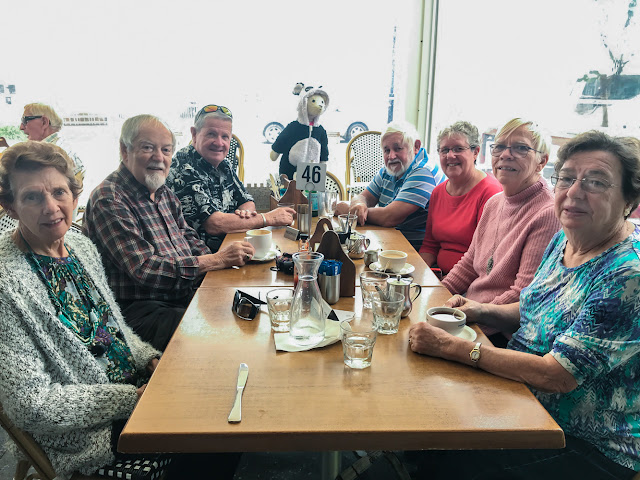 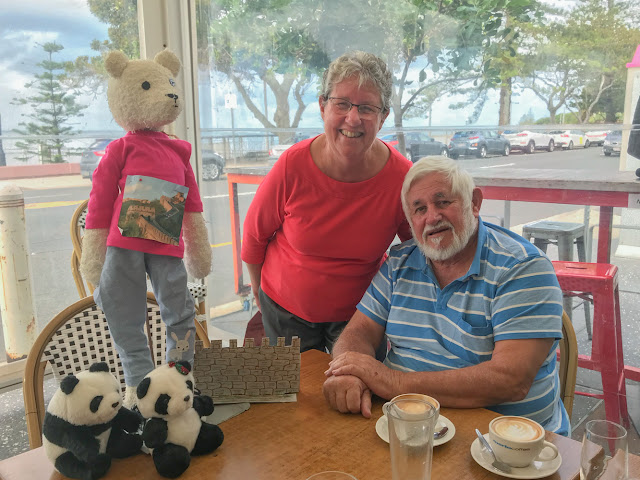 Chris and Bob travel a long way to be with us.
Posted by diane b 20 comments: 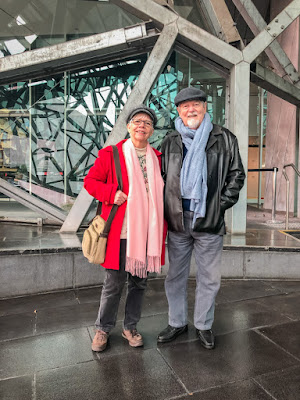 We were spending 5 days in Melbourne to celebrate our 50th Wedding Anniversary, Mother's Day and Fox's birthday. We had a free day from celebrations so we went exploring in Melbourne. Carol and David used to live in Melbourne so they showed us around. We went to Federation Square where there is nothing square in the huge steel and glass buildings. The Art Gallery is here. It's a lot colder in Melbourne than in Brisbane. 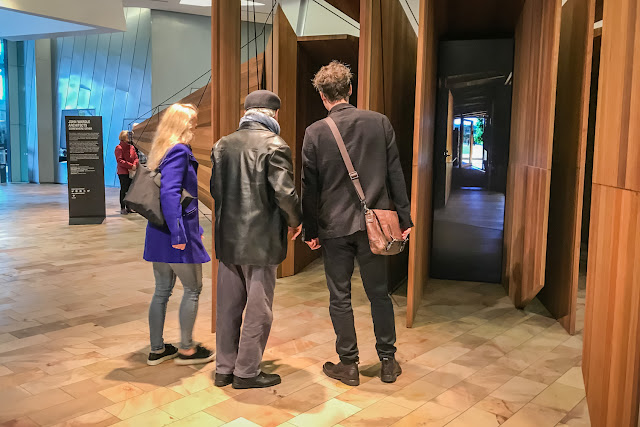 We were intrigued with this installation called 'Somewhere Other' by John Wardle Architects. It was a bit like a maze. 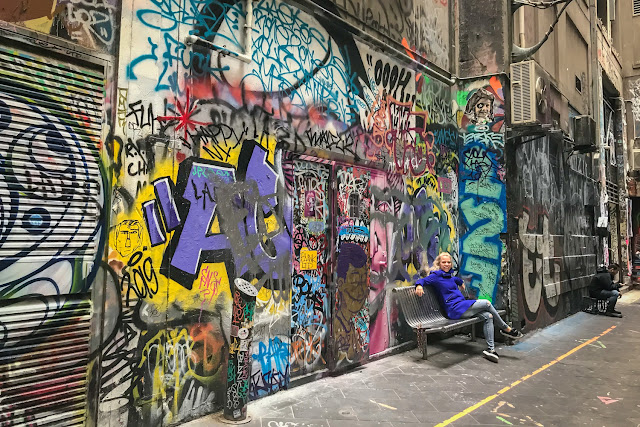 We checked out the famous Melbourne Laneways, some were interestingly grungy. 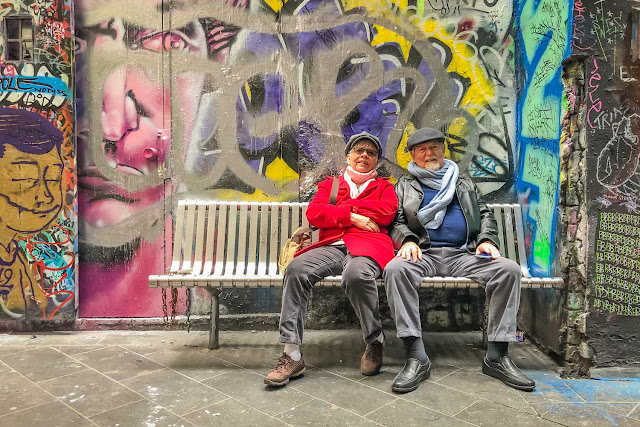 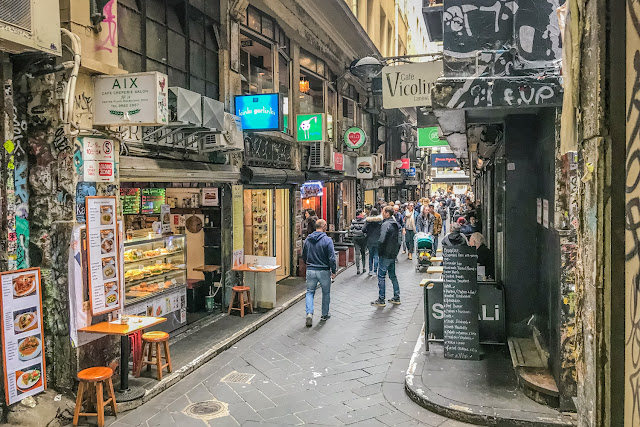 Most lanes were full of restaurants and cafe's. 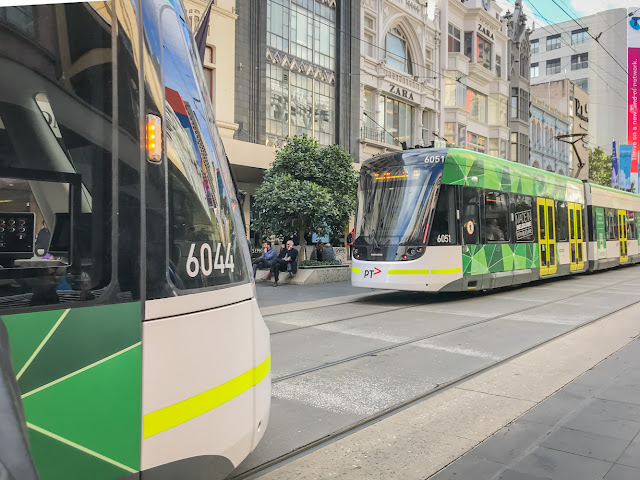 We caught a free tram to Bourke Street Mall where no cars are allowed only trams. Lots of posh stores in this street. It was a fun day.
The next day was Mother's Day and we were invited to Sonya's house to celebrate Mother's Day and Fox's Birthday. 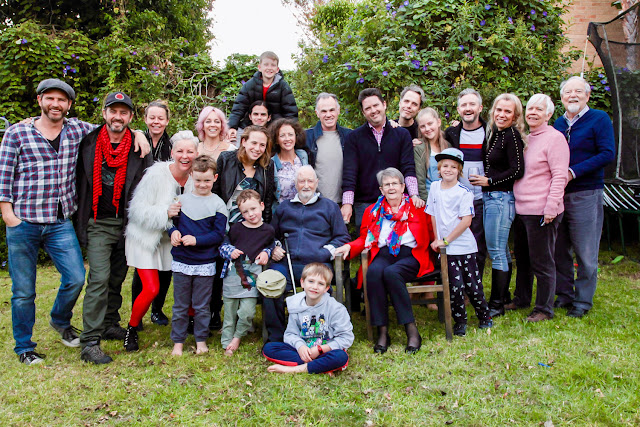 Sonya's Husband, Bernie (on extreme left) is from a big family. They all came for the celebrations. Bernie's mum and dad, Helen and Nev, have 4 boys and 1 daughter, 3 daughter in laws and 1 son in law and 9 grandchildren. (one is missing) 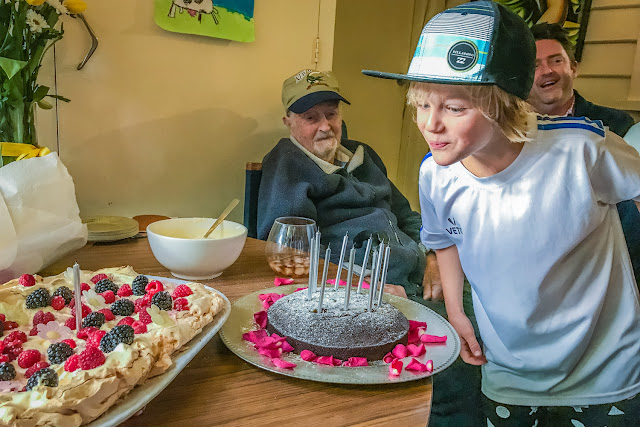 Fox blew out 9 candles. We all sang happy birthday, happy anniversary, happy mother's day to everyone all at once. It was funny.
Posted by diane b 25 comments:

Email ThisBlogThis!Share to TwitterShare to FacebookShare to Pinterest
Labels: Melbourne 2019

Last Thursday we flew to Melbourne for a special long weekend. Friday was our 50th Wedding Anniversary, Sunday was Mother's Day and Monday was Fox's birthday.
David and Carol came from Sydney and they organised us to stay at the Grand Hyatt Hotel it was a lovely hotel with nice views of the city. 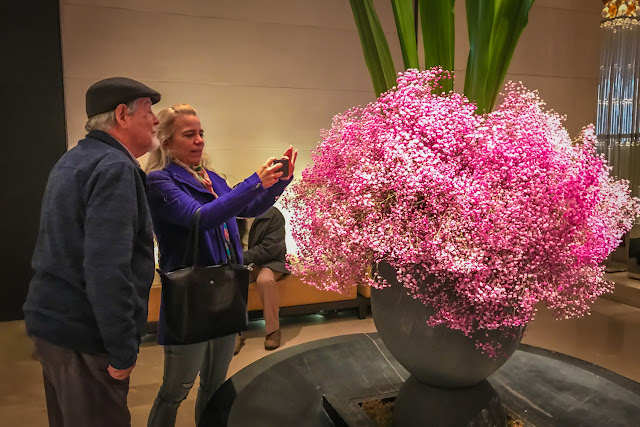 Bill and Carol were impressed with the flower arrangement in the foyer. 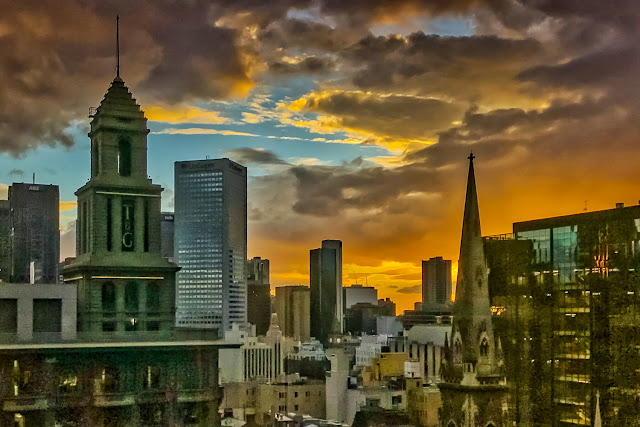 It was a typical Melbourne autumn day, grey with showers but it brightened in the evening as we looked out of our window. 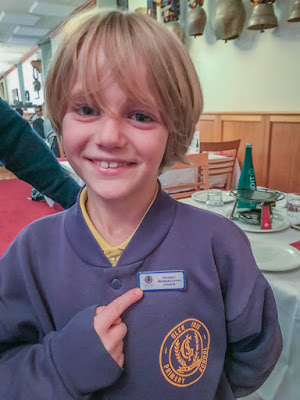 Then we went to the Swiss Club to meet Sonya and the boys for dinner. Bernie couldn't make it because he was working. (acting in a TV series called "My Life is Murder")
We had fondu, rosti, sausages, schnitzel and far too much. I was so busy talking to Sonya and hugging the boys that I forgot to take photos except when Fox showed me his Student Councillor badge. 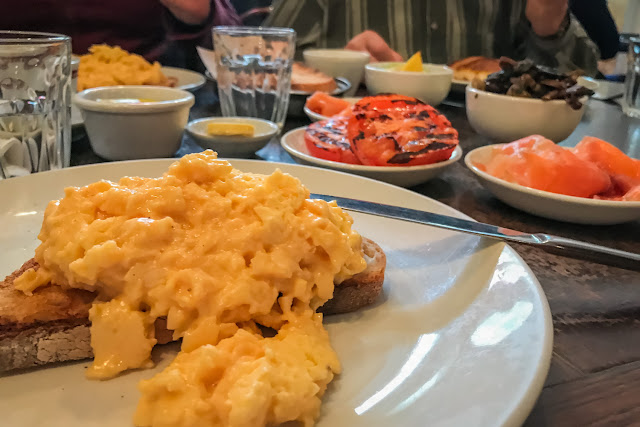 The next day was our anniversary and Carol and David took us to the European Cafe for breakfast. It was delicious. 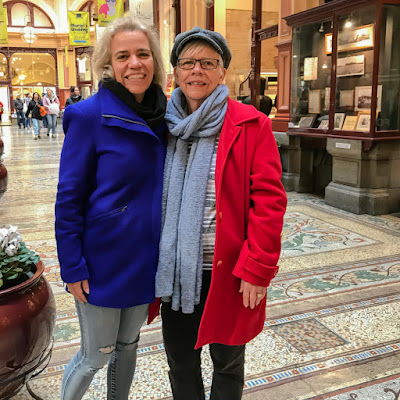 Afterwards, Carol and I left the men to their own devices and we went shopping. The shopping in Melbourne is fabulous. So may beautiful stores with high fashion and expensive stuff. Carol bought me new shoes, jumper and scarf. She bought herself shoes and we spent ages looking for a jacket for her but she couldn't find exactly what she liked until we were ready to go back to the hotel when she spotted one but she changed her mind when she saw the price $450. 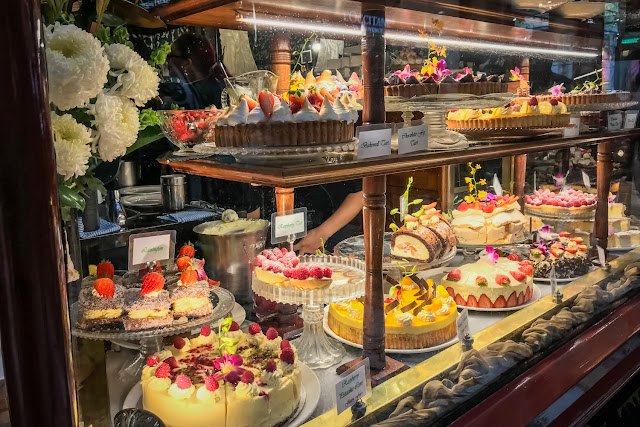 We ignored the temptation to have coffee and cake in the Arcade. 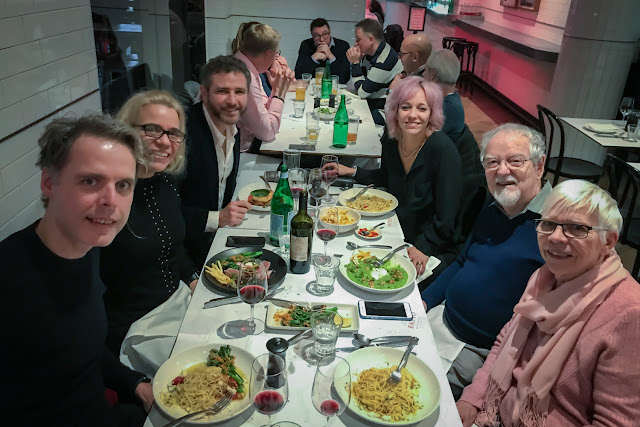 That night Sonya organised a booking at Fatto a popular Italian Restaurant for our anniversary dinner just with the grown ups. 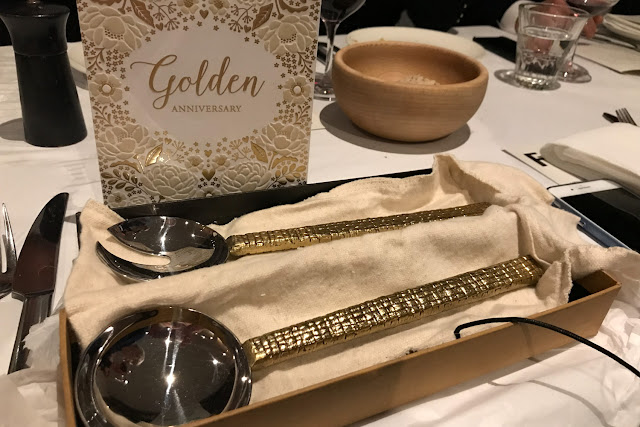 The young ones gave us hand made gold handled serving utensils and a gold pass to the movies for a year. They are wonderful people and we are so proud of them and thankful for caring about us. 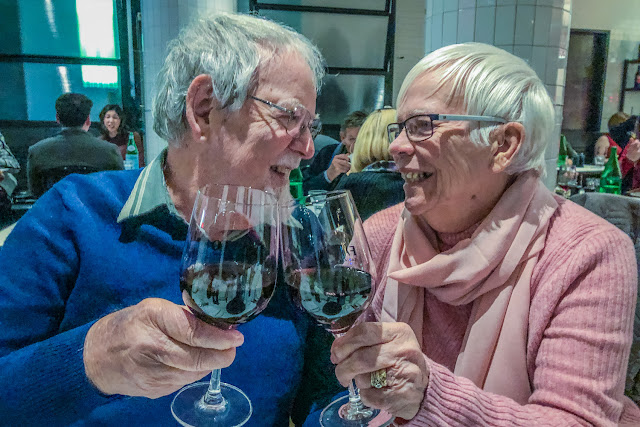 Happy Anniversary. 50 years together and still in love. 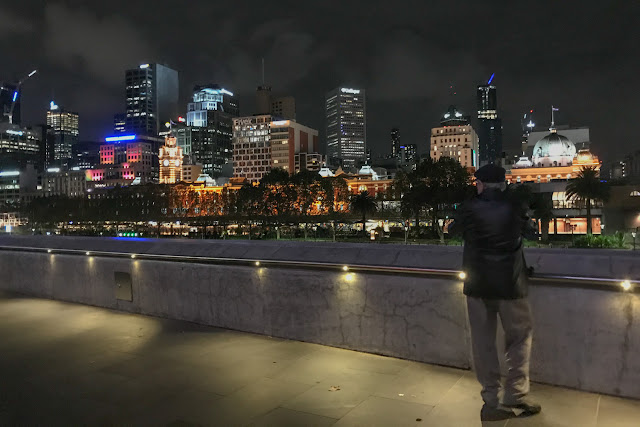 We didn't bring our cameras to Melbourne so it was phone camera time at Southbank. Another two days and two celebrations to go.
Posted by diane b 27 comments: