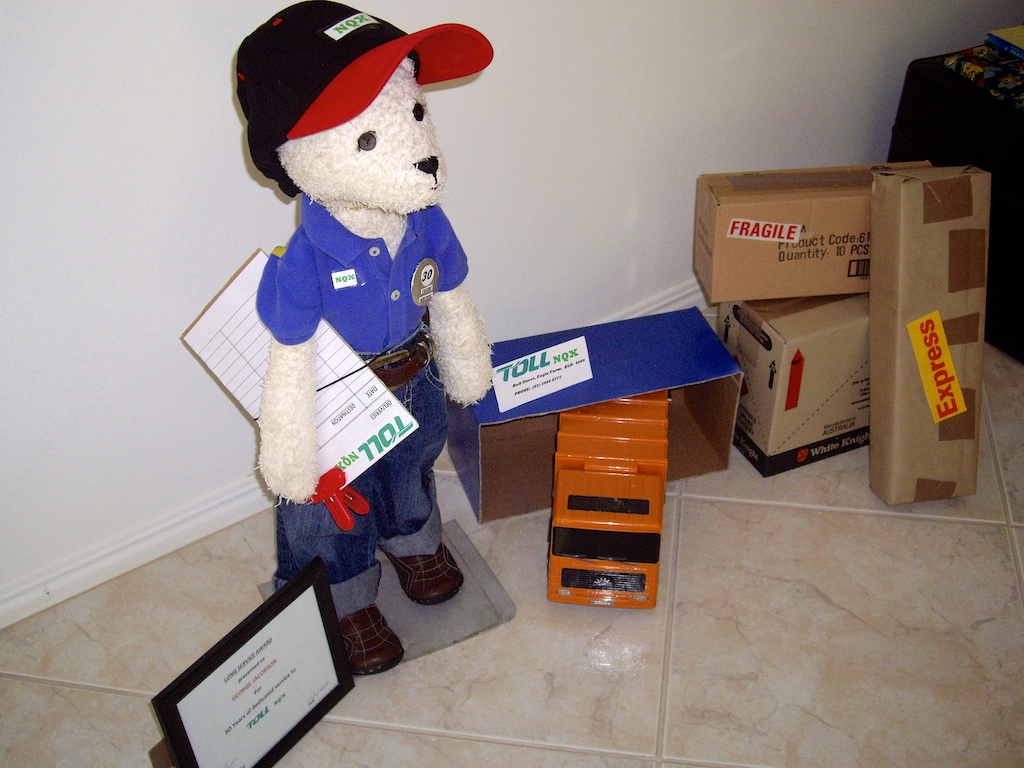 At Mary's house, Birthday Bear was all dressed and ready to go to The Fishmonger's Restaurant to surprise George. Bear had his truck driver's uniform on, his clip board, and parcels for delivery as well as a truck to drive. Bear was very excited about being a truck driver, 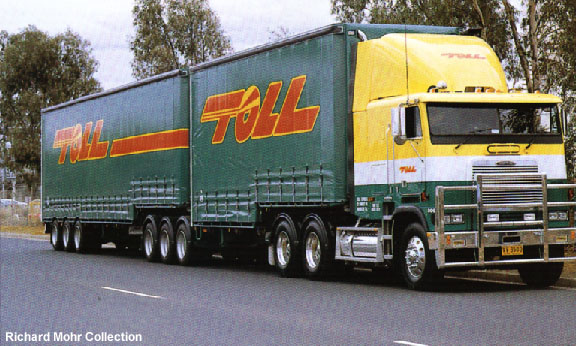 George worked for 30 Years for the transport company, 'Toll'. He drove huge B Double Trucks. 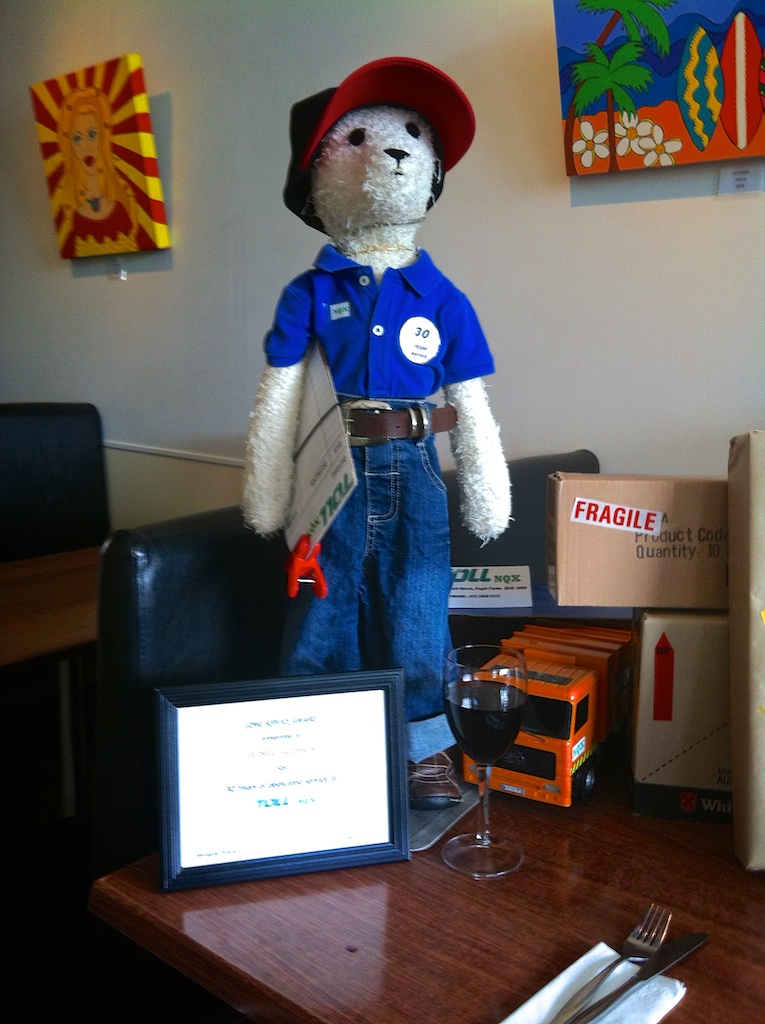 Bear was already on the table at the restaurant looking very important when we arrived.. 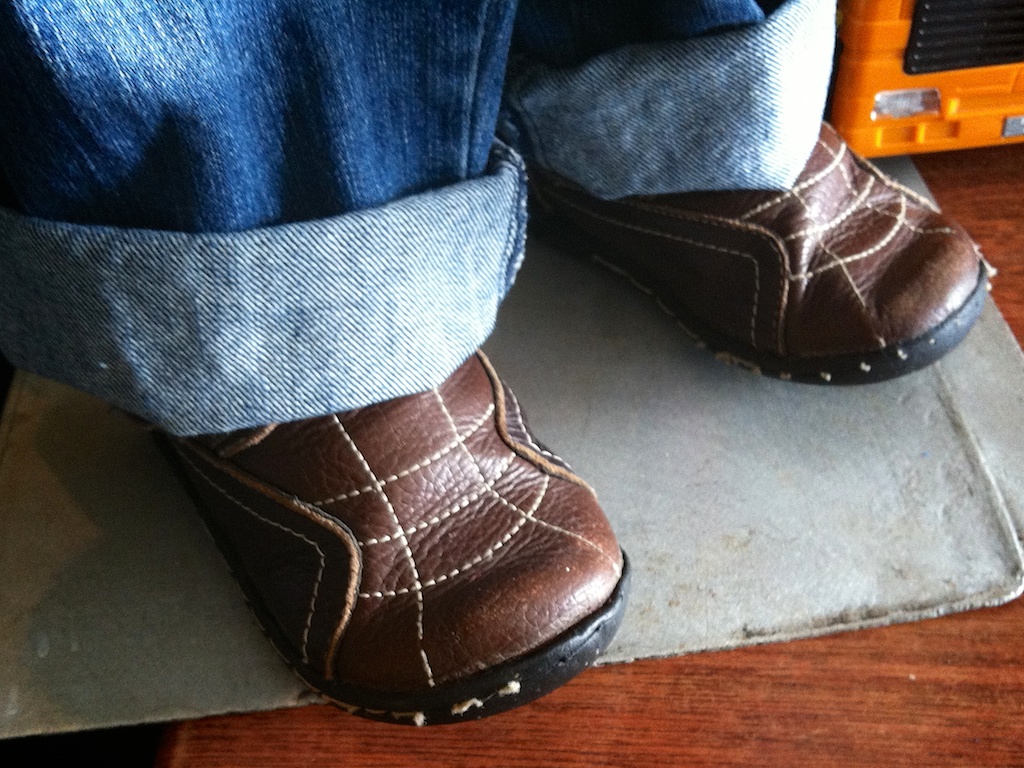 He was very happy with his work boots. 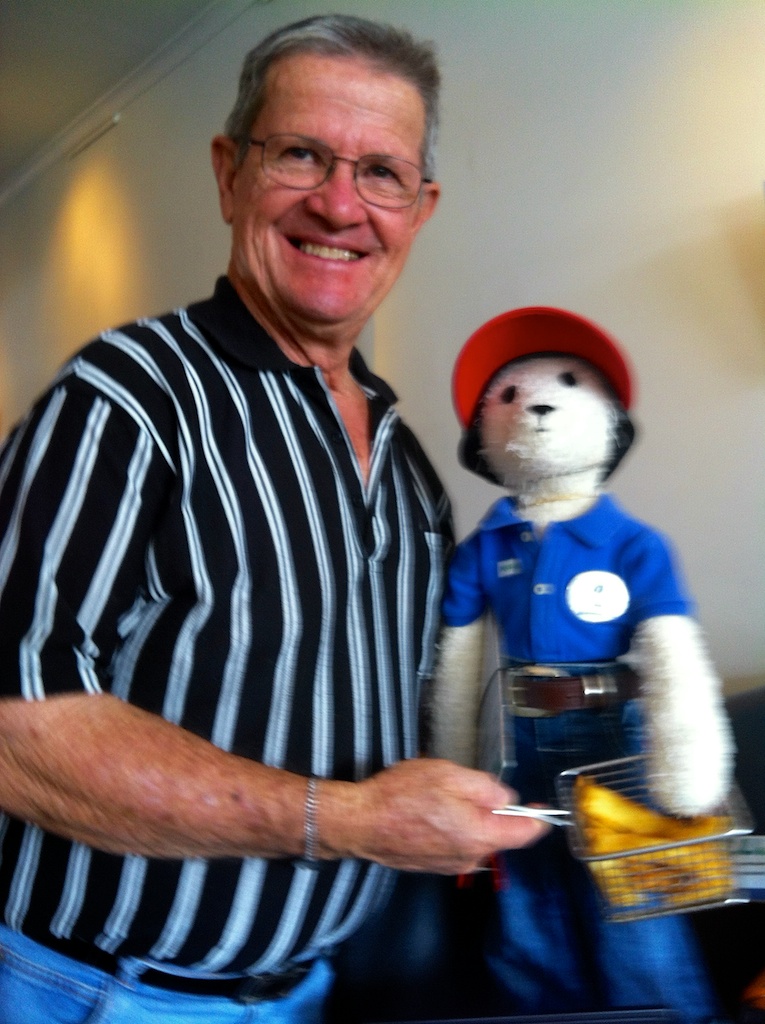 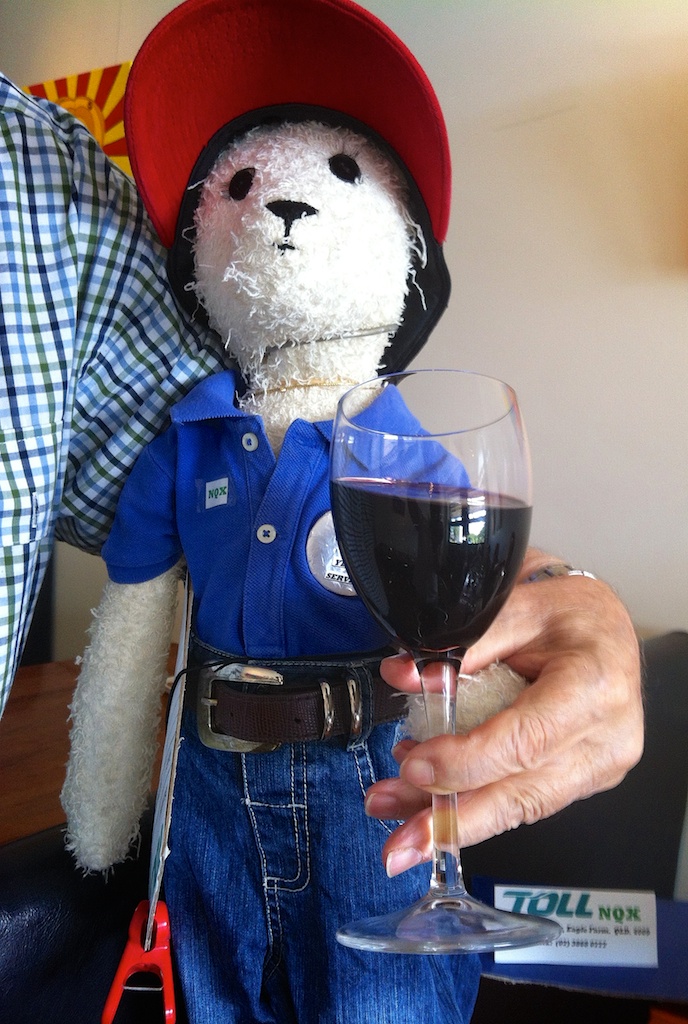 He was even more thrilled when Bill shared his wine with him and George offered him some chips. 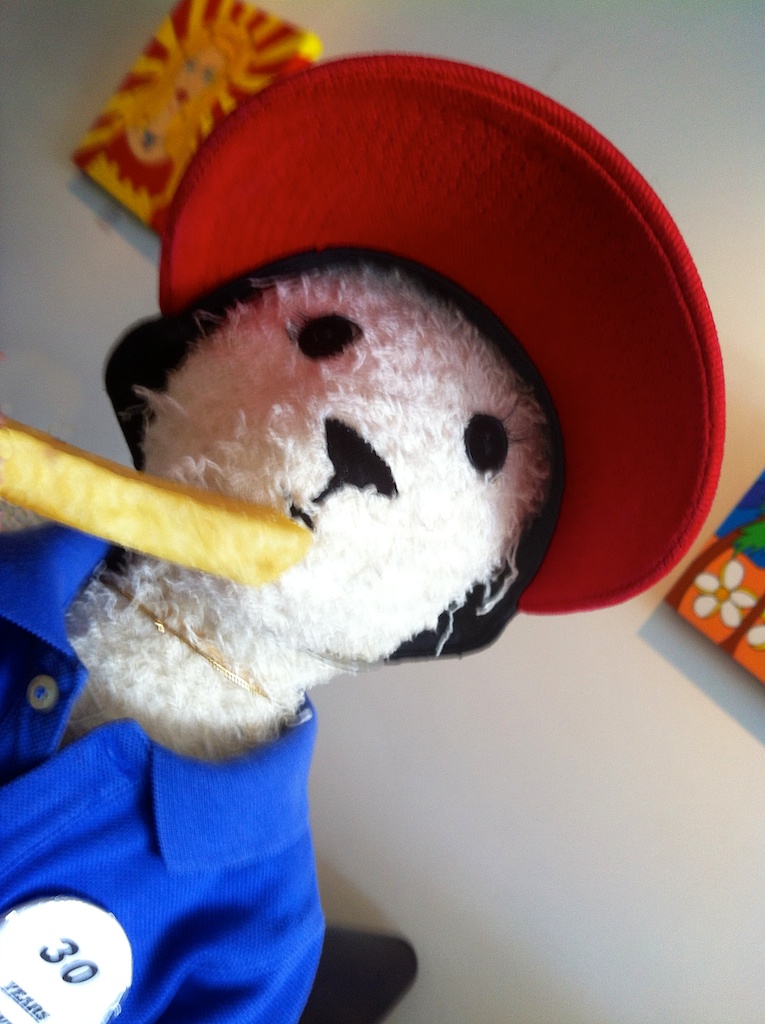 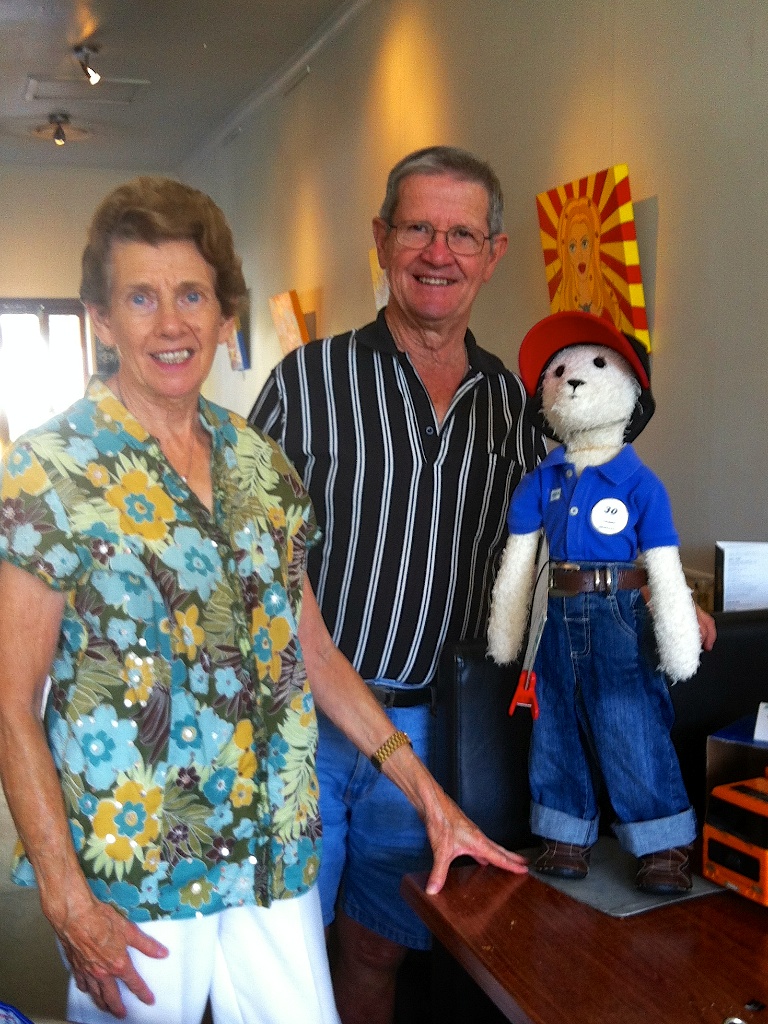 Mary did a great job of dressing Birthday Bear for George.
For readers not familiar with our Birthday Bear tradition click here:Birthday Bear
Posted by diane b 24 comments:

Twenty-five years ago, when our kids had left school, TOH (The Other Half) took the plunge and started his own air conditioning business. To avoid high overheads he worked from home. We had an office built under the house next to the garage. So our highset house now became a two storey house. After he retired, his office became his man cave, where he pursued his hobbies and what ever men do in their caves other than make a mess.
I was astounded at how much junk one man can collect and store in his cave when we decided to  clean it out and turn it into a classroom for U3A, as well as a new clean tidy cave for him. TOH has taken on teaching "Movie Making" to oldies in U3A.(University of the Third Age.) He taught  one course at the local library in term one and many students wanted to do more and other members wanted to do the course but the room at the library was taken over by another group. So we decided to do it at home, which is better because using his own gear is much better and faster.
However, this meant a clean out of the cave. Secretly I was very excited. The rest of the story is in pictures: 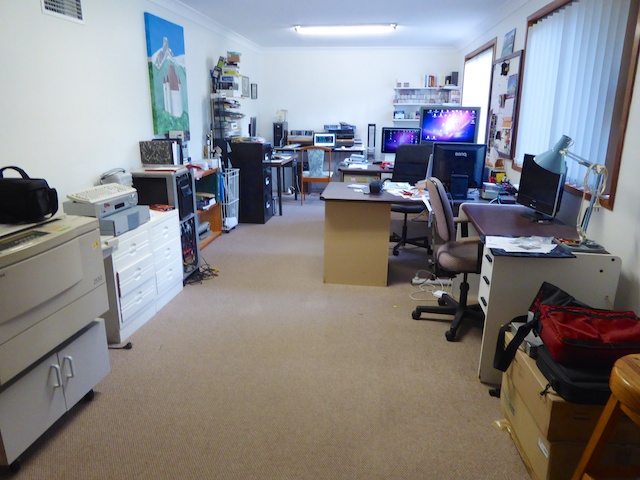 The man cave as it was. Looking from the garage door. 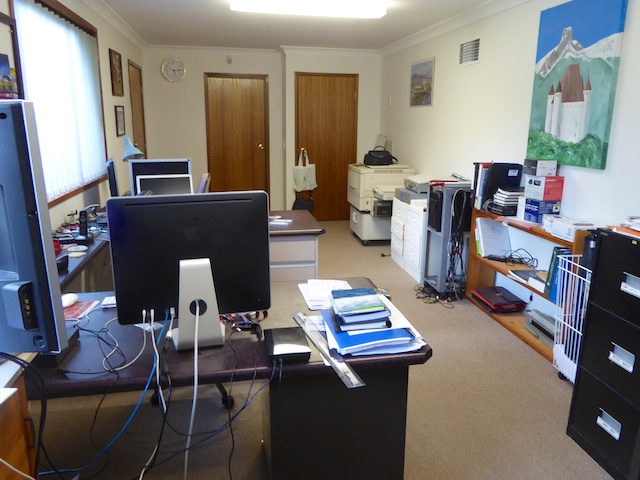 Looking towards the garage door. The office has its own entry on the left, so clients didn't have to go into the house. 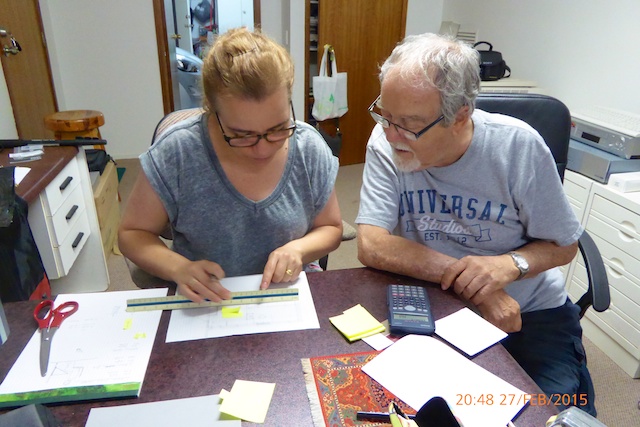 As luck would have it, our interior designer daughter was in Brisbane for a week doing a job for her Sydney company. So when she got home from work we gave her another job of designing a man cave which can be turned into a classroom once a week. She's brilliant. First thing she said was, "Everything has to go and start afresh." Father looked shocked at first but realised daughter knows best. I was very pleased. 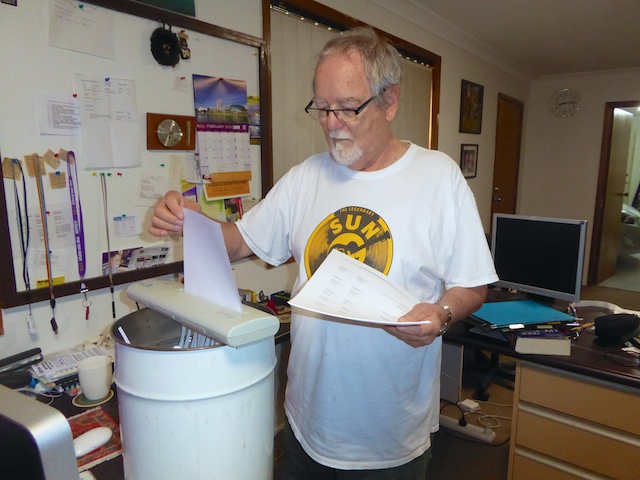 TOH starts emptying two filing cabinets which held 25 years worth of files, a lot of sensitive stuff he shredded. 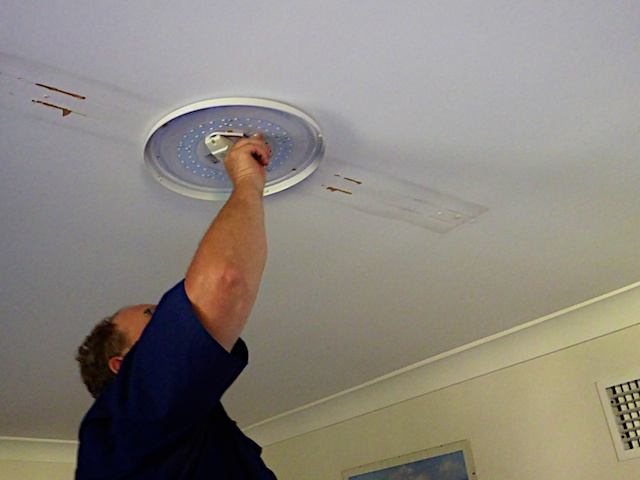 First up we bought new lights as the old fleuro tubes were rusted into the fittings. We bought the new LED lights, which don't use much electricity. We had to employ a licensed electrician even though TOH was once an electrician, he didn't have an up to date license, and the warranty would not be valid. 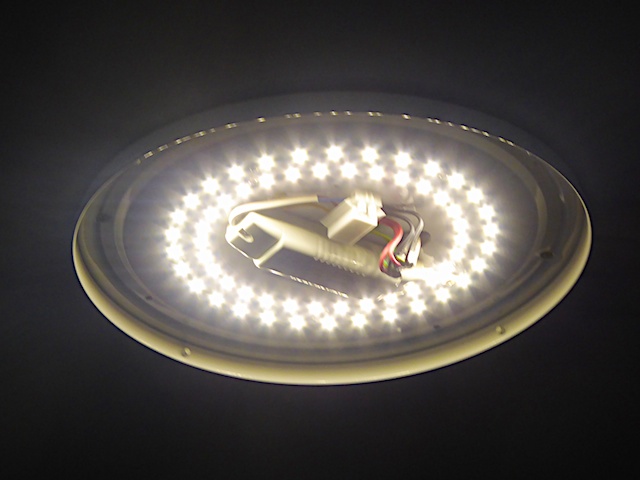 They are nifty lights that only have chips and no bulbs. 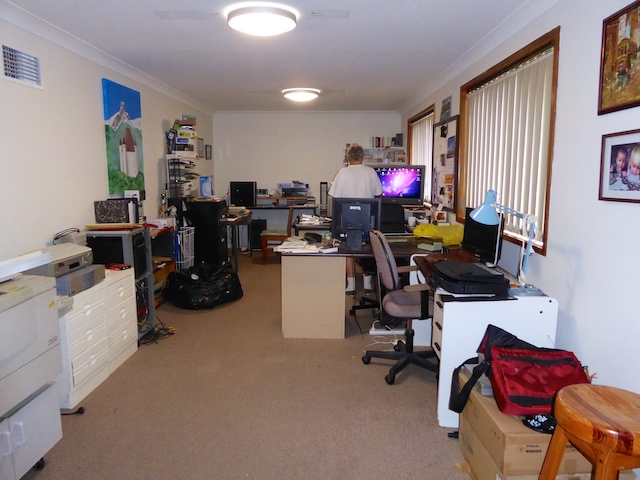 They work well too.
"C'mon you can't shred forever! Lets start sorting this stuff. What to you need and what can we toss?" 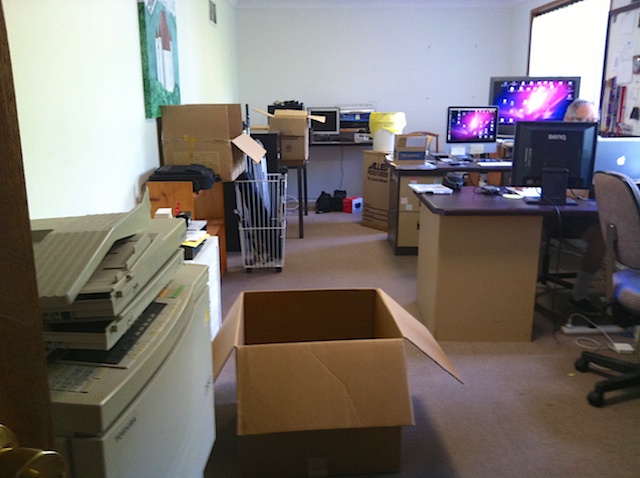 Finally I get him organised. Boxes for junk and boxes for stuff you want to keep. 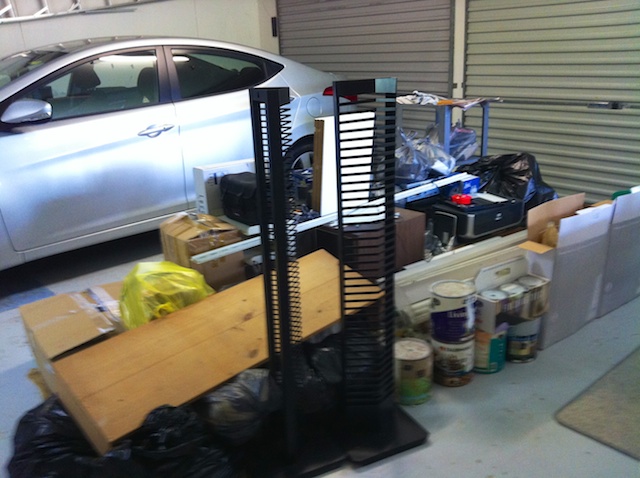 The junk mounts up. We stack it in the garage where my car used to live. The stuff to keep is on the other side of the car. 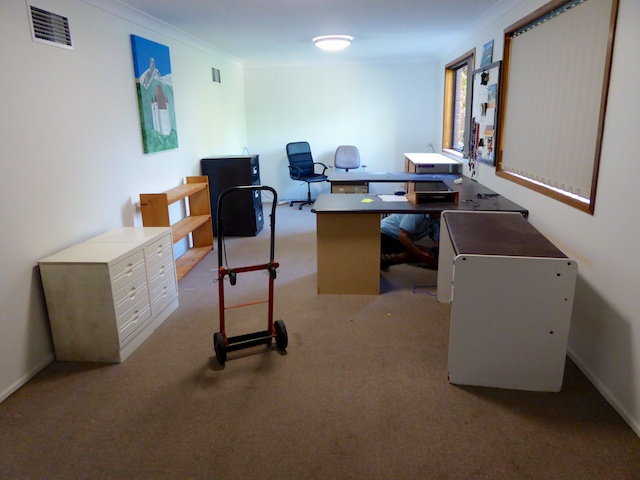 I hired my Gardener/Handyman to remove the furniture and rubbish and take it to the dump. He's under the built in desk unscrewing it from the wall. 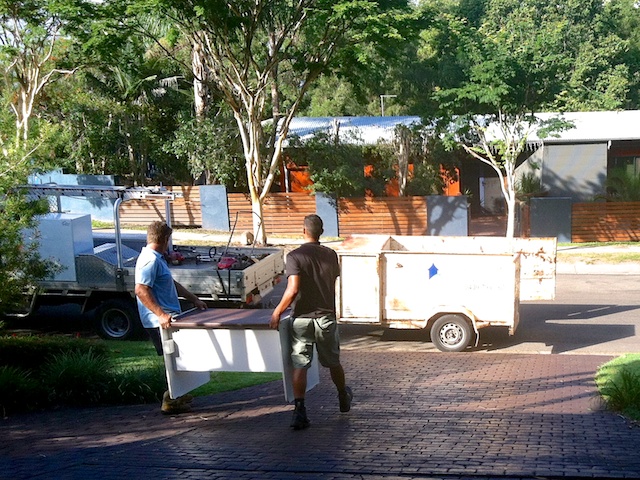 Handyman and helper fill a truck and trailer with all the furniture and junk. Can you believe how much junk one man can collect? 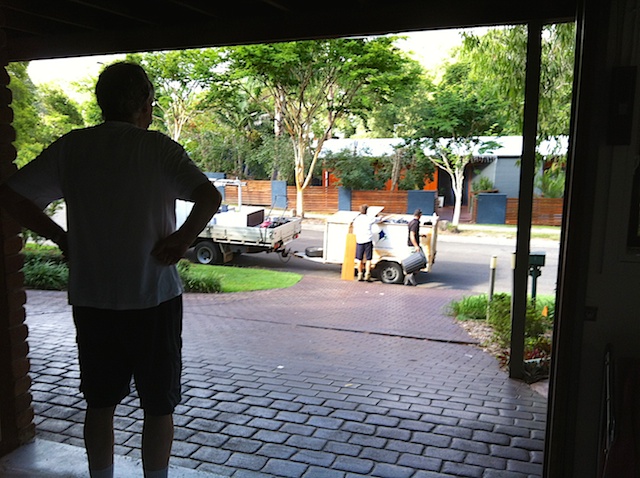 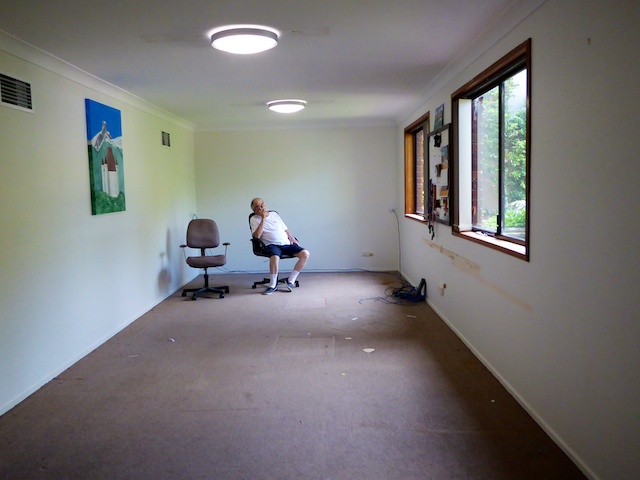 (Stay tuned for the makeover)

Posted by diane b 31 comments:

My mum, Florrie was the daughter of a mine manager and the second youngest of 8 siblings. When she finished school in Yorkshire at Thorn's House, she went to London to study nursing in 1930. She made friends with a girl called Charlie. They had lots of fun together and often went on country walks. My mum was very fashion conscious and wore up to date clothes all her life. (I never got those genes, unfortunately). In those days it was frowned upon for women to wear slacks/pants. It was thought vulgar.

"Following the war, in the 1920s, women exposed their arms and legs, flattened their chests, bobbed their hair to look boyish, and got the vote; but pants remained taboo, except in the realm of sports.
When diva film star Marlene Dietrich appeared in slacks with flared bottoms in her United States debut film Morocco in 1930, she signalled the emergence of women's pants from sportswear to high fashion. Wearing them both in films and private life, she popularized the pants look." (from the internet)

Mum saw Marlene in the movies and decided to wear pants but there were none in the shops. So she and Charlie bought mens pants and wore them on one of their walks. Naturally, it caused a stir, as this had been thought a vulgar thing to do. However, a newspaper photographer thought it would make a good story. So he photographed them and the caption was:

So in her way she helped pave the way for it to be acceptable for women to wear pants. "She made it Happen"

My eldest daughter, Carol-Ann is an interior designer and has designed the inside of many commercial buildings around the world. One of her most exciting jobs was to design the Google offices in London, Dublin and Munich. She also enjoyed doing the BBC Worldwide in London and the ASB Bank in New Zealand. Many people are enjoying comfortable workspaces thanks to her. She "Made it Happen"

My youngest daughter, Sonya is a production manager for theatre. She has also worked in different countries. She enjoyed working at the Adelaide Fringe Festival, Edinburgh Fringe Festival, the Sydney Opera House and now at University of California Theatre department. She has helped people enjoy theatre and taught students how to produce shows. Sonya also juggles being a good mum with her career. Not easy! She "Made it Happen"
I am proud of the women in my family just like I am proud of all the women in the world who are achievers and "Make it Happen" and to those who are continuing to strive for equality.
Posted by diane b 29 comments: