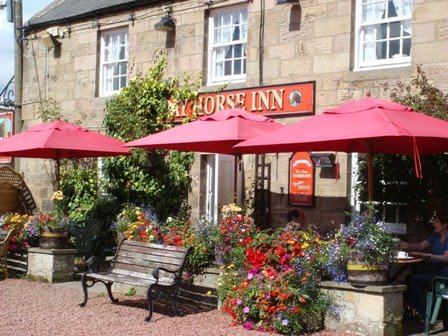 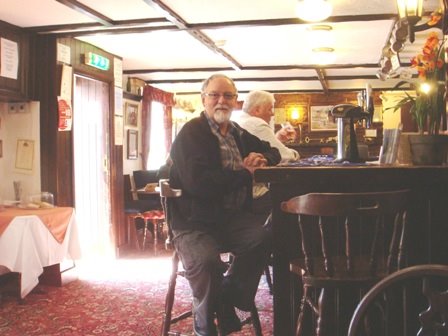 Bill tries out the bar. See the very low ceiling? 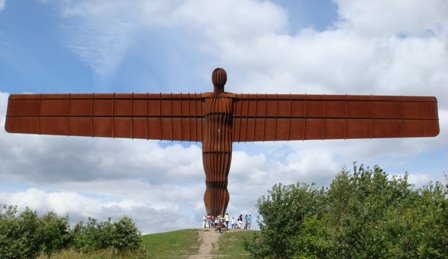 As we were passing through Newcastle Bill spied "The Angel of the North", that we had seen in a documentary. It is made of steel. Can you see how small the people are at the bottom? 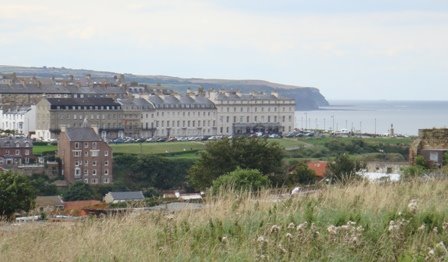 We wanted to stop and have a look around Whitby, a coastal town in Yorkshire, where Captain Cook came from, but we didn't realise that it was a Bank Holiday in England this weekend. Every man and his dog was there eating fish and chips, which is what one does in Whitby. People were spilling out of cafes and into the roads, some even sitting in the gutter to eat their fare. Every inch and more of parking spaces were taken. Too many people for us so we drove on avoiding straggling holiday makers and stopped on a hill near ........ 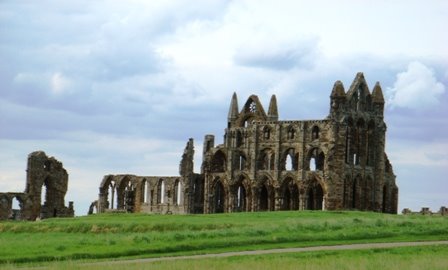 the old abbey. Then we continued onto Robin Hood Bay where we had a booking in a B&B. We had to go down to the Old Town and once again there were many people. 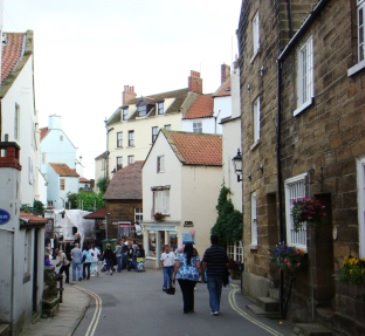 The old streets were very narrow and there were cars and delivery vans blocking up the road. Some had not been able to move for hours. Luckily it cleared after a while and we could get down to the bay and..... 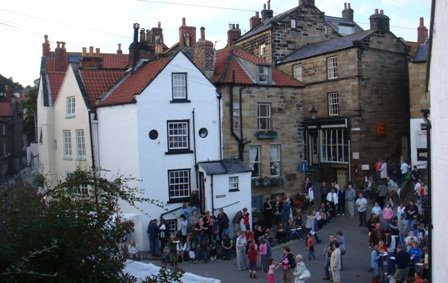 ....found our B&B. (The pink building to the left). We discovered all the people were waiting for a rock concert to start in the little square under our room!!**?? (Thank goodness we had ear plugs) 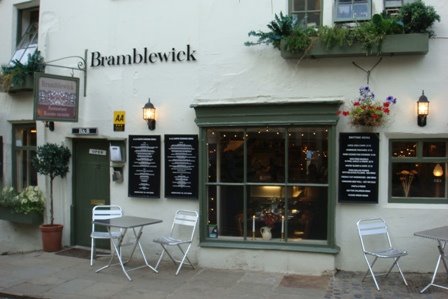 There was a restaurant underneath, which was booked out for dinner but they could squeeze us in if we ate early. So we did and it was delicious. 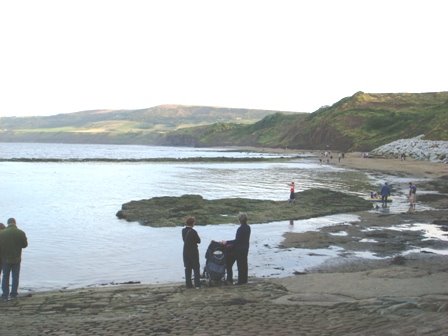 Opposite the B&B was the bay, although attractive it is nothing like we are used to in sunny Queensland. We are very lucky to live where we are surrounded by magnificent beaches. 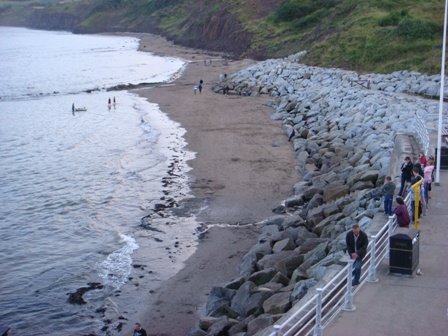 After tea we went to explore this quaint little village in the twilight, now we don't get either of these in QLD. 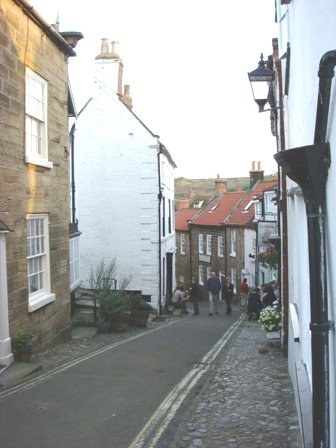 The village is built on steep slopes rising from the bay. There is only one road in but many ...... 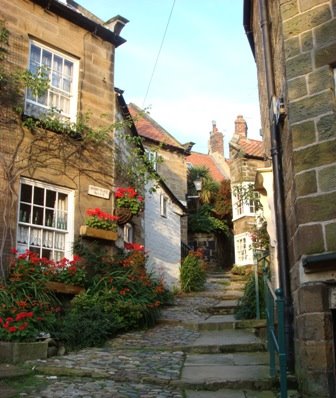 ..... curious little alley ways bedecked with flowers and winding in all directions........

...through the village. It was like being in a living museum. 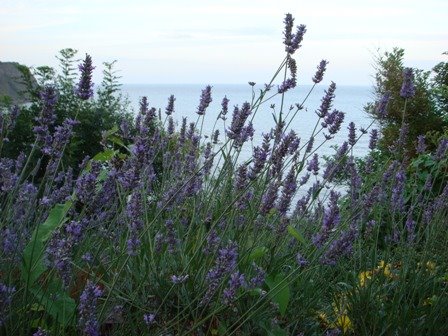 We worked our way to the top of the hill where there were squashed up little houses with beautiful gardens and wonderful views. 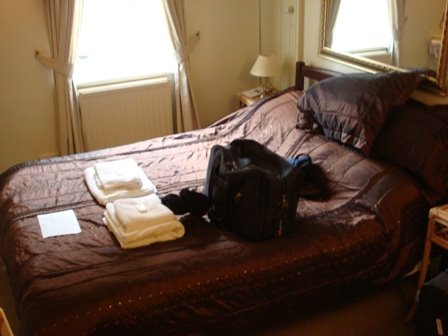 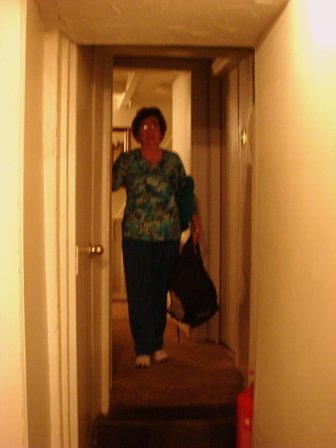 ...and cave like corridors. Poor Helen suffers from claustrophobia and she found it a bit uncomfortable here. She could also feel the presence of unpleasant beings from bygone days. It used to be a famous smuggling port centuries ago.
Sunday 24 August 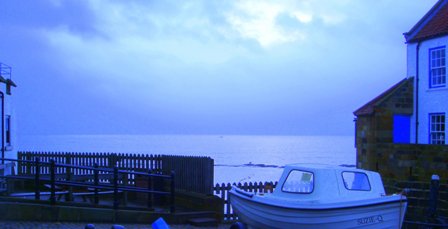 Needless to say she was happy when we had to leave early in the morning. Paul had to walk miles up to the top of the hill to get the car from a car park and drive it down to pick up the luggage before the holiday crowds blocked us in.

So we said good bye to the quaint old village and headed for Manchester and the flight to Amsterdam to board the river cruise ship. However we had two more places we wanted to see. 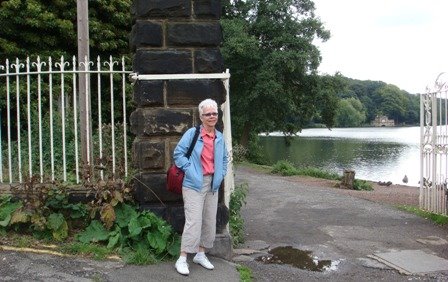 Newmillar Dam is a small village just outside Wakefield. It is where my grandparents lived and where my mother grew up. During the war, when she was pregnant with me she left London and returned to her parents place to avoid the bombing. That is how I came to be born here. 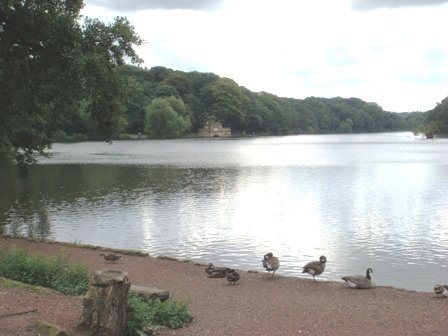 The dam is where my mum used to swim in summer and skate in winter. Just opposite the dam.. 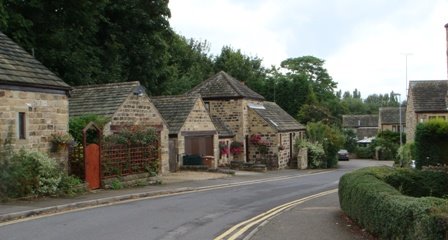 ..is where my grandparent's farmhouse used to be, but now it has been demolished and an estate built on the farmland. I remember visiting my grandparents here when I was little. After this nostalgic stop we headed for a more entertaining place. 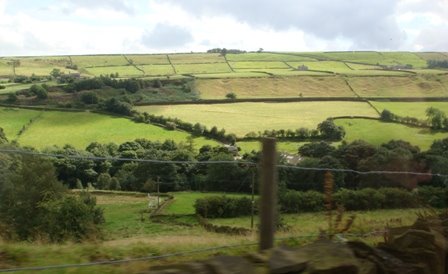 We drove through the Yorkshire farmlands until we reached the village of Holmfirth. It is here where Bill's favourite TV comedy is filmed. "The Last of the Summer Wine" is the longest running TV comedy in the world and Bill has been watching it since the 70's. All the characters have become his friends. 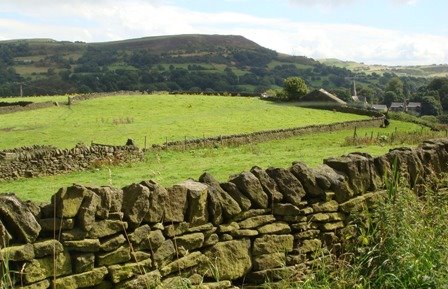 So you can imagine how excited he was to actually be on the set. 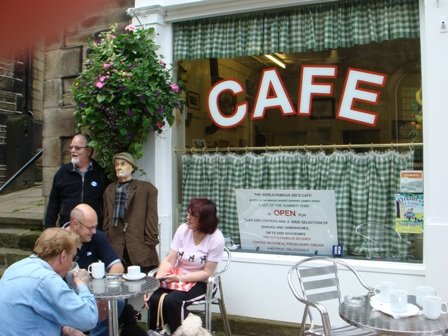 This is Syd's Cafe where many scenes are shot. We had lunch there and Bill..... 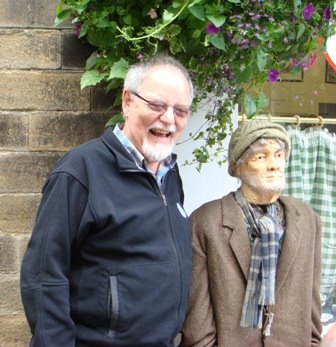 ......met one of his favourite characters (a model only). We went on a guided tour and were shown where the characters live and where some of the most hilarious scenes were shot. We all had an entertaining time........... 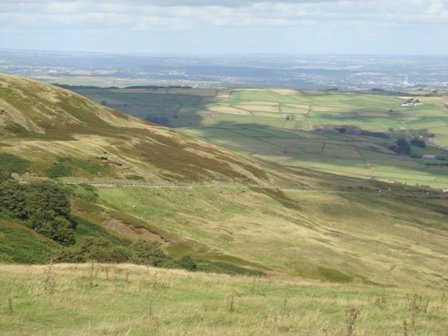 ....before driving over the moors to Manchester. Goodbye UK.