I have a friend in the village, who was a vibrant, energetic woman. Jan loved travelling, photography and riding her bike up until six months ago when she had appendicitis. She went to hospital and ended up there for three months. She had a previous lung disorder but she coped with it but after the op she could hardly breathe. She came home with an oxygen machine. She lost weight and needs a walker. Now she has been diagnosed with aggressive cancer and has not a good prognosis. It has been sad to see her deteriorate so fast. However, she has a good attitude and is okay with her lot.

Jan has always loved making photo books. She had started one about the gardens in our village street by street before she went to hospital. Now she wants to finish it before she goes. However, she likes support when she pushes her walker, oxygen tank and camera around the village. She asked me if I could go with her while she finished photographing the last two streets and the zen garden. I'm amazed at her determination to push on. We spent three days finishing off her photo shoot. She is now compiling the book.

I took some shots while I was with her:- 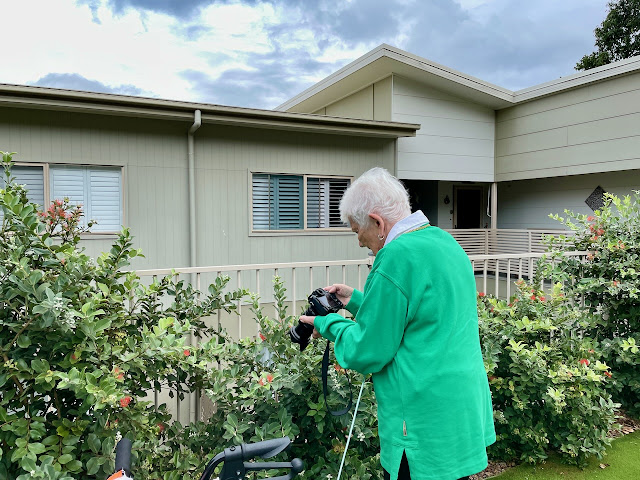 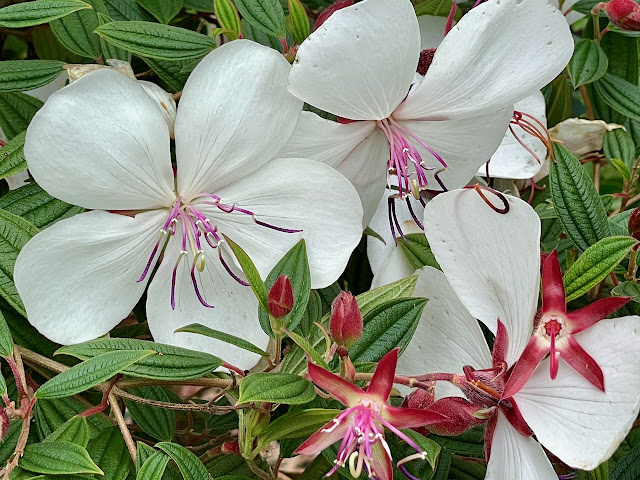 I took some shots while I walked with her. 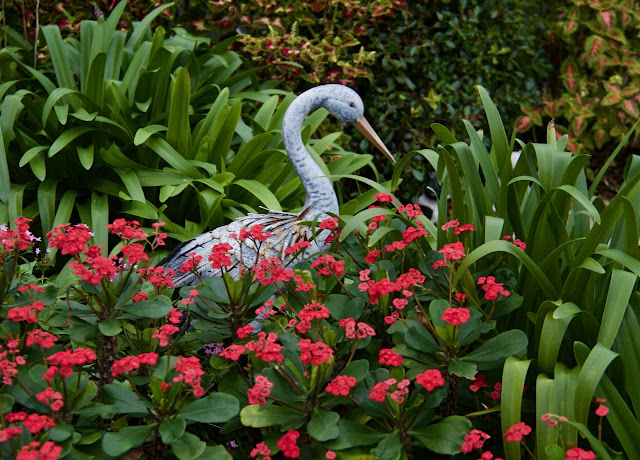 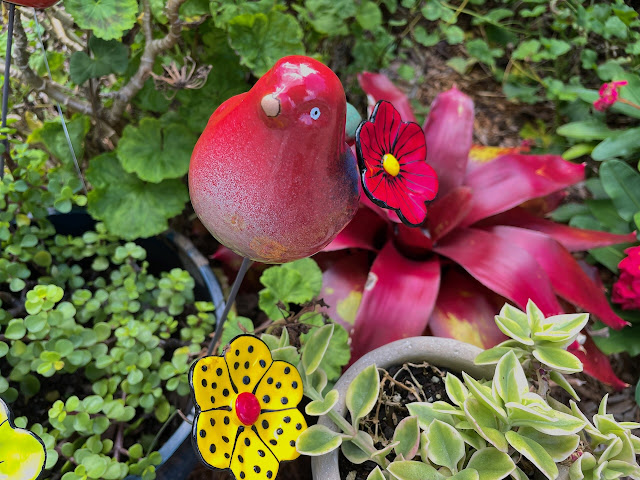 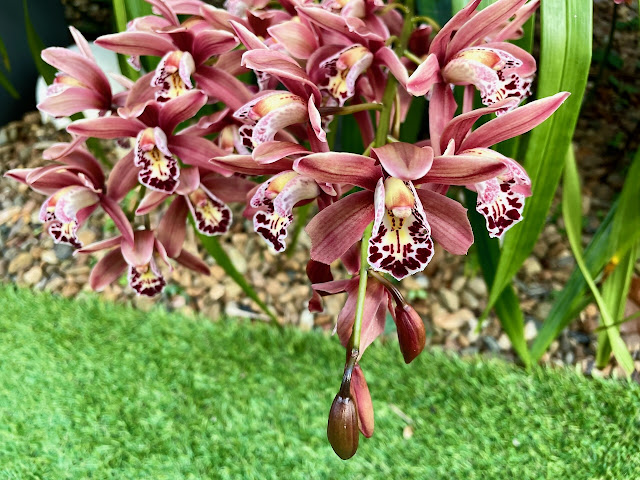 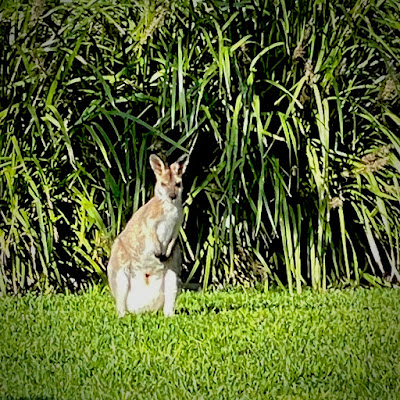 We bumped into Mrs Wallaby with a pouch full. 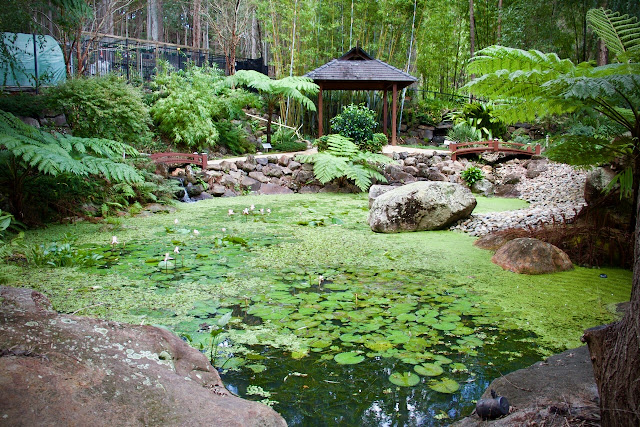 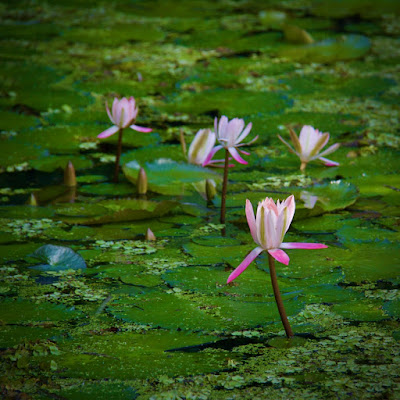 Posted by diane b 15 comments:

Email ThisBlogThis!Share to TwitterShare to FacebookShare to Pinterest
Labels: Jan and the gardens

We went to Underwood Park. It has been raining for weeks and the lagoon flooded over the boardwalk but we had a little dry spell and the water subsided but left the lagoon brown. We enjoyed our walk in the sun. 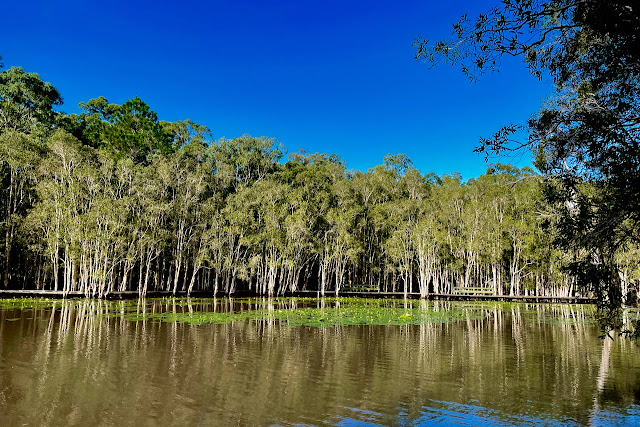 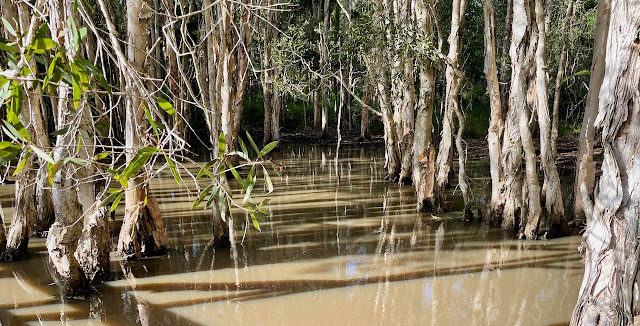 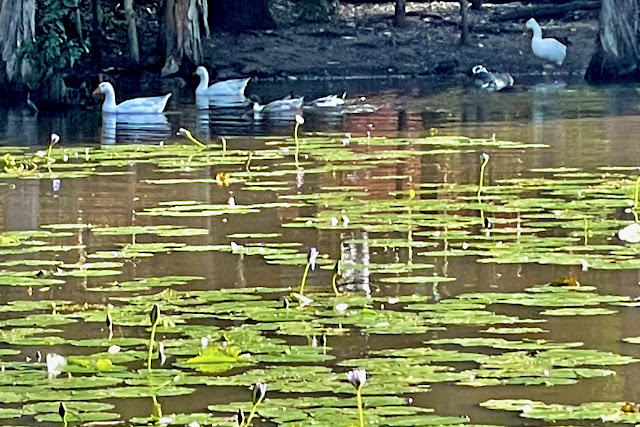 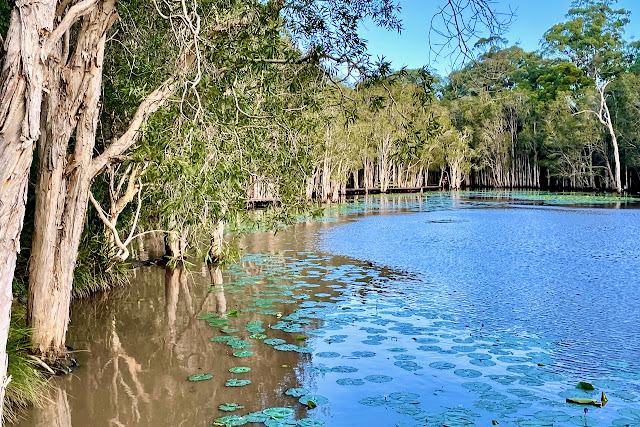 Posted by diane b 12 comments:

ANZAC DAY is on 25th of April. It is the day that we remember all the Australian and New Zealand servicemen and women who lost their lives in war. On 25 April 1915 ANZAC troops landed on the Gallipoli Peninsula. By the end of the day, 2000 had been killed. The campaign was a failure, but the bravery, ingenuity, endurance and mateship shown on that day has become enshrined in the Australian character.

Each year the village has their own little ceremony, while much bigger ones are held in all towns in Australia. We have quite a few veterans in the village and they proudly wore their medals and laid wreathes. Children and grandchildren of veterans also wore the medals of those no longer with us.

Usually the veterans march around the village streets and then hold a ceremony at our little cenotaph but this year rain forced the ceremony to be held inside the Community Centre.

First we had a little Dawn Ceremony, which is held at the same time that the troops landed on the beach. We had it next to our rose garden but the rain kept a lot of residents in bed. 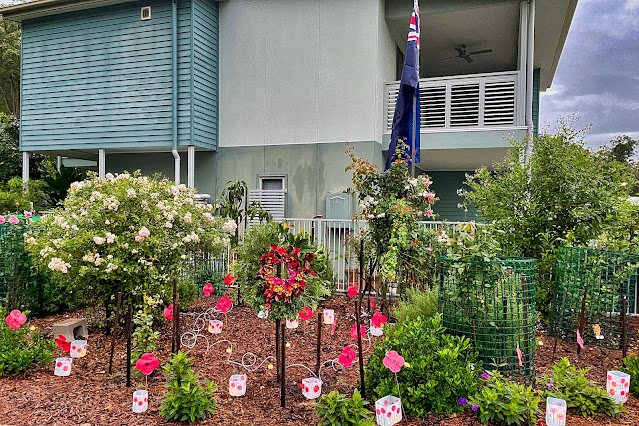 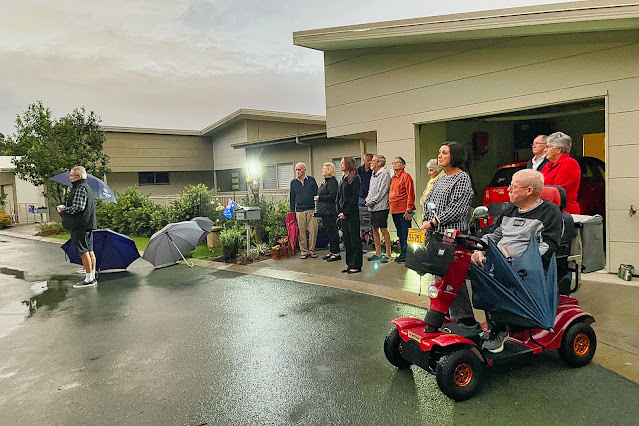 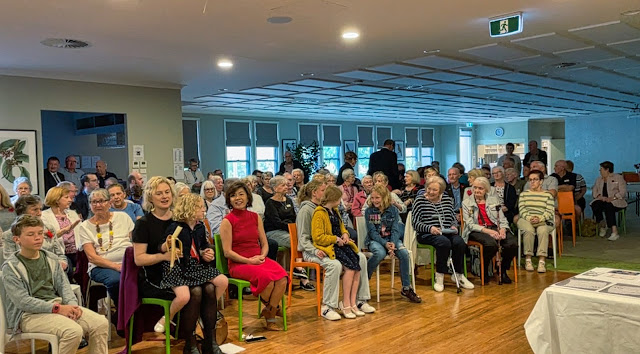 The gathering for the ceremony in the Community Centre. 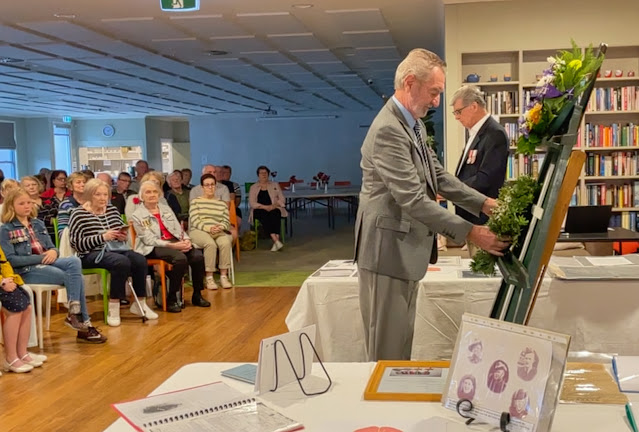 I discovered at one of our dinners that this guy, Brian, and I were in the same year in high school in Sydney back in in the 50's. 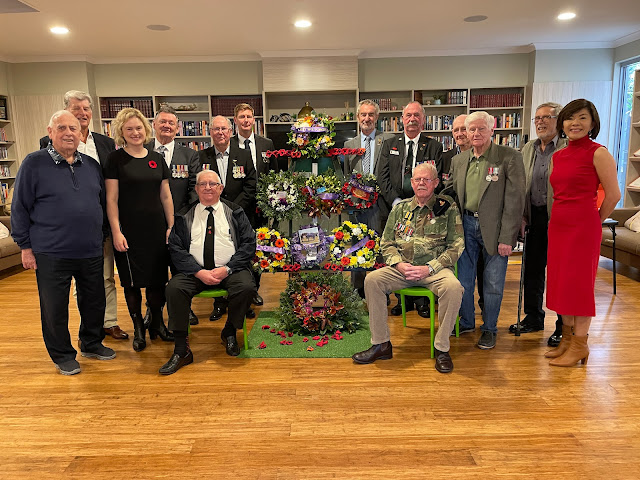 All the veterans in our village with our managing director Chiou See Anderson and our local federal senator, Amanda Stoker. the wreathes are in the centre.
The ceremony was followed by a morning tea and a sausage sizzle for lunch. After lunch we had a social with music provided by our very own Elements Band. 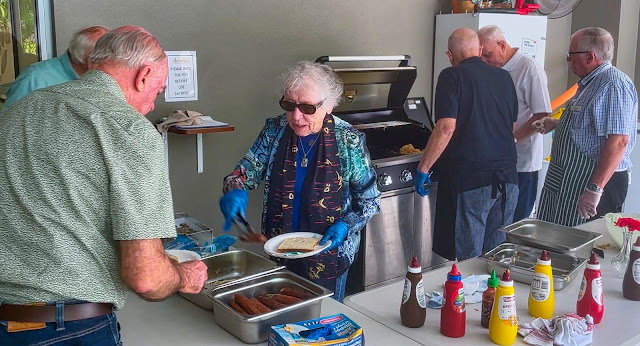 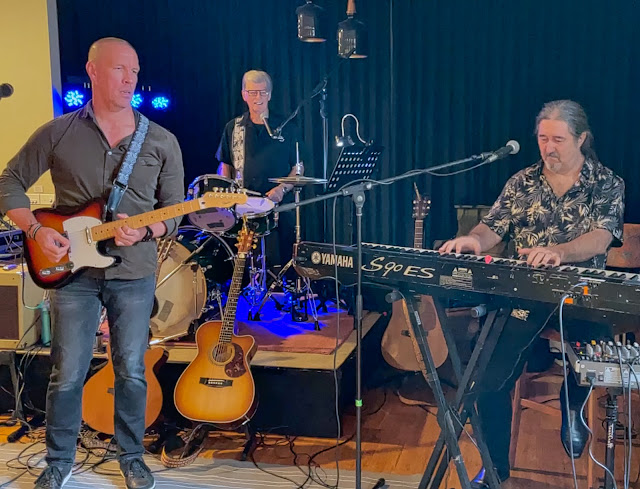 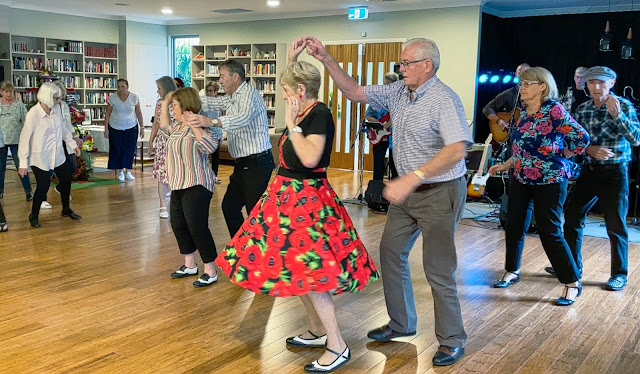 It was a big day but quite successful despite the rain, which is still falling today. We have never seen so much rain at this time of year.

Posted by diane b 13 comments: