Apologies to Birthday Bear, Mary and the Birthday Bear Group. I forgot to post about our celebration in June for Mary's birthday. (That dementia is creeping ever closer). If you are not familiar with our Birthday Bear tradition, read here. Anyway back in June we all went to the Power Boat Club in Caloundra for lunch. Caloundra is about one and a half hours drive from home. However, Chris and Bob have bought a property north of Gympie which is even further north than Caloundra. So we thought this would be about a half way place to meet. 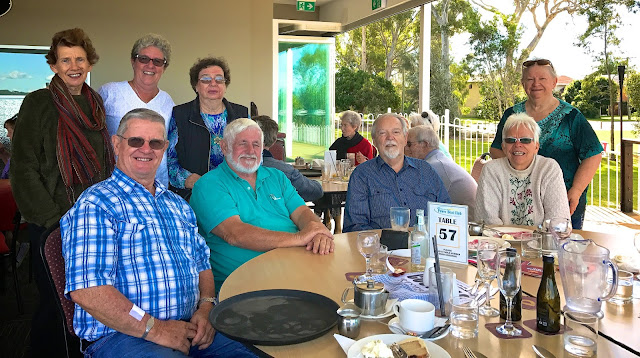 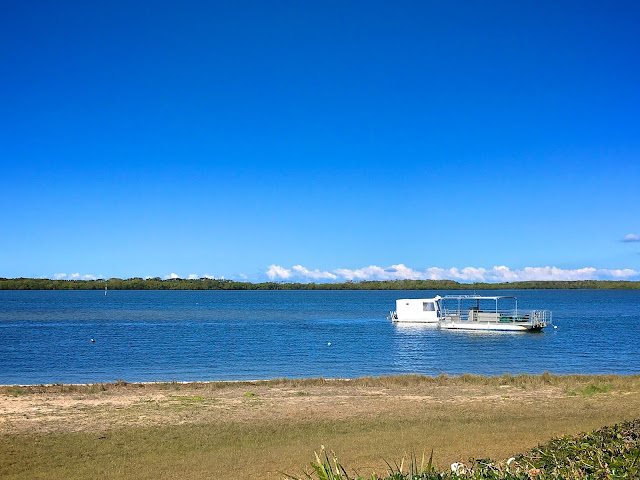 The view from our table was very relaxing. We were looking across the Pumicestone passage towards Bribie Is. 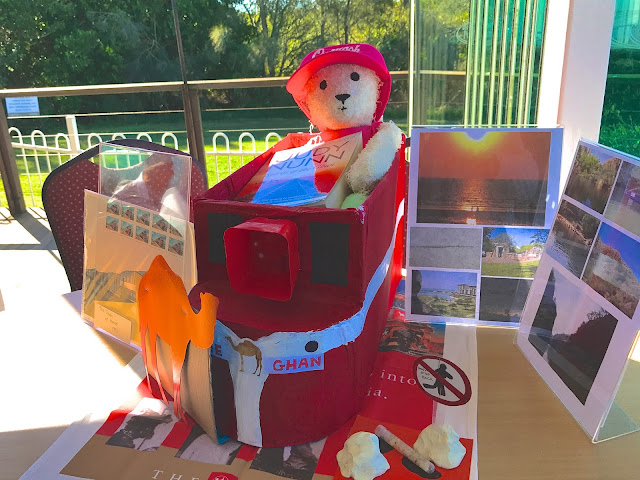 Birthday Bear was happily waiting for us in a train. The train is 'The Ghan" a famous Australian train, which travels from Darwin on the north coast to Adelaide on the south coast. It travels right through the centre of Australia from top to bottom or the other way. It takes 3 nights and 4 days. It also stops for you to take side excursions to Katherine, Uluru, Alice Springs and Coober Pedy outback towns. "The Ghan" is named after the Afghan cameleers, who used to take camel caravans along this route before roads and trains were there. 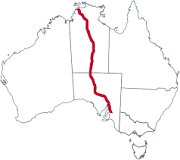 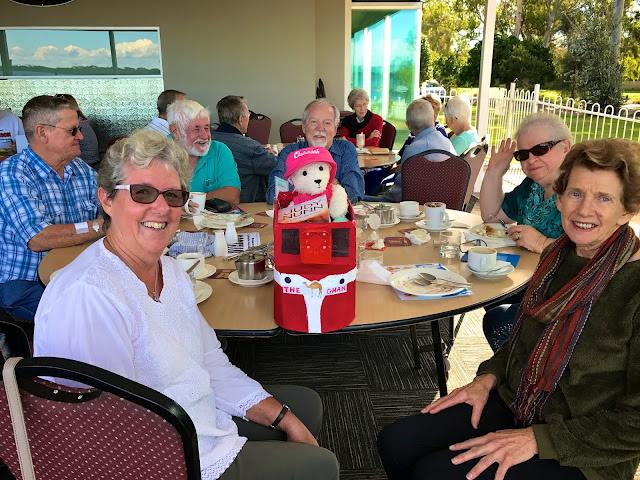 Chris on the left dressed Bear for Mary on the right. Mary has just been on "The Ghan" for a trip with Ann, George and Helen. I would have loved to be with them but we had other plans. We had booked a photographic trip to Hawaii at the same time. It turned out we had to cancel as we both had medical problems at the time.

We all had a good time except I managed to knock a full glass of red wine all over Ann's top and pants. We went to the bathroom where she rinsed her top and dried it in the hand drier. Sounds funny now but I was ashamed at the time. It was a long, slow drive home because there had been an accident.
Posted by diane b 22 comments:

SENIORS ON THE MOVE

So many of our friends are selling their houses and moving into apartments or villages. We visited our friends, Kathy and Rob yesterday. They used to live in the same street as us. We travelled to the USA with them a few years ago. They have recently moved into a high rise apartment at Kangaroo Point in the city. It is like Kathy has travelled the full circle. Over 30 years ago she migrated from California to Queensland. Her first home was in a big house in Kangaroo Point. Since then she married an Australian and she has lived in many different suburbs of Brisbane but now she has returned to her favourite place. Kangaroo Point. It is a peninsula sticking into the Brisbane River. They have bought the most beautiful apartment on the 9th floor of a tower with stunning views of the city and river. 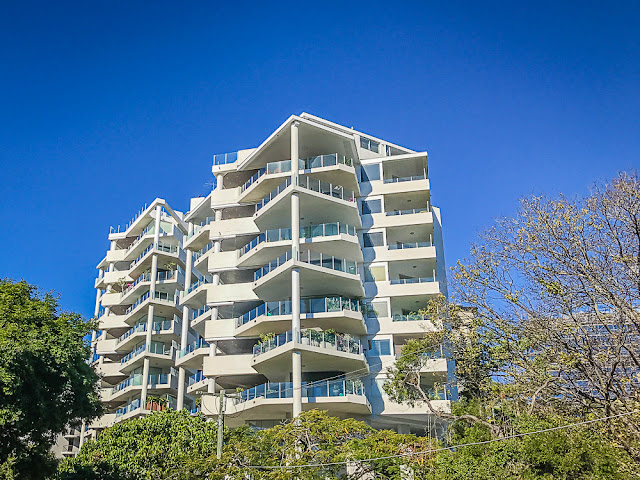 The twin towers of Millennium Apartments Kangaroo Point. Each floor is one apartment. 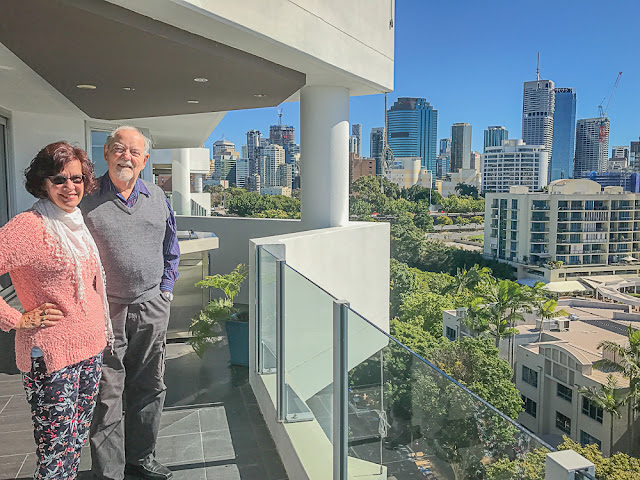 Bill and Kathy admire the view. 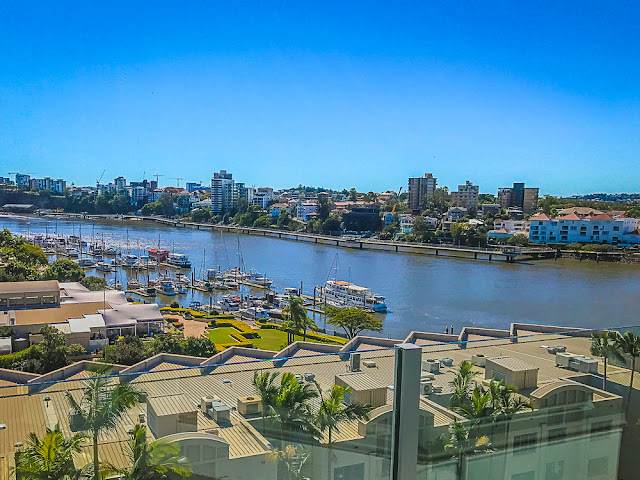 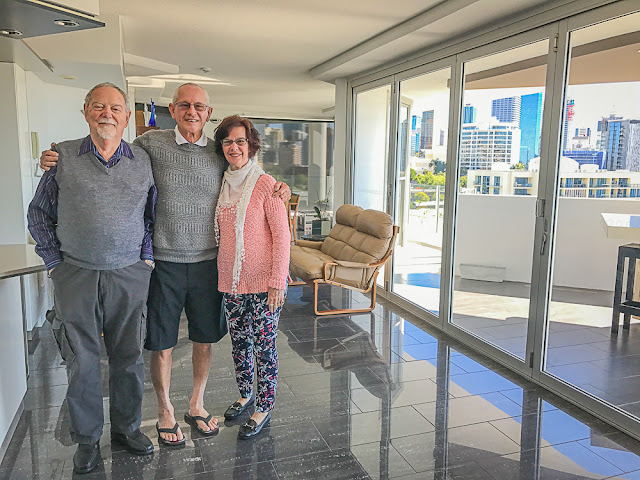 Lunch and a catch up with Rob and Kathy.
Posted by diane b 21 comments:

Last week I visited Sonya and family in Melbourne. On the weekend my other daughter flew from Sydney to join us. We had a lovely time together except I found it very cold.

While the nanny minded Banjo, and Fox went on a play date us three girls went to lunch. 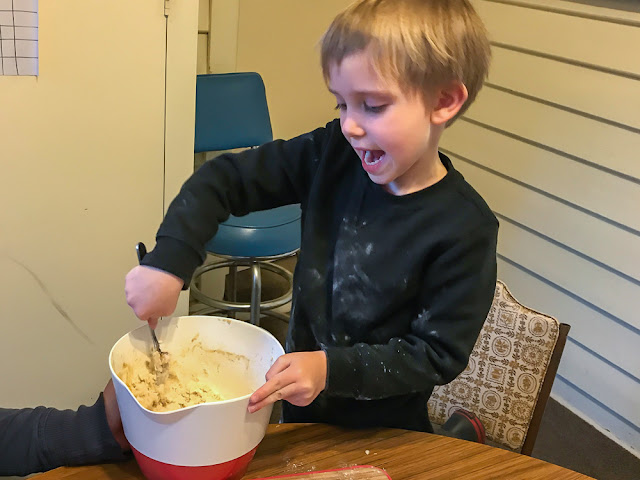 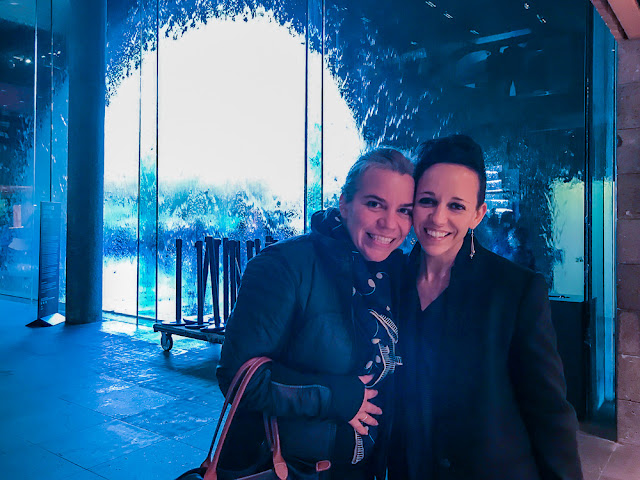 After lunch we went to the Art Gallery to see the Van Gogh exhibition but it was booked out. Water continually pours down this window. 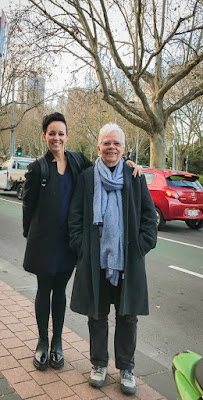 Melbourne reminds me of Europe. It was a lovely time being with my two girls. Sonya gave me a warm scarf for my birthday. 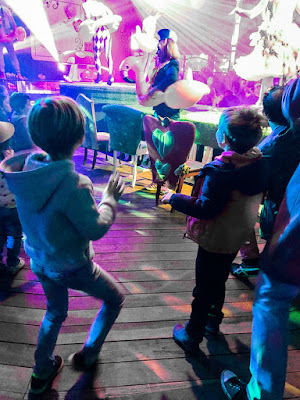 The next day we all went to the circus show, The Mad Hatter's Tea Party in the Spiegel Tent. The boys participated in the dancing. 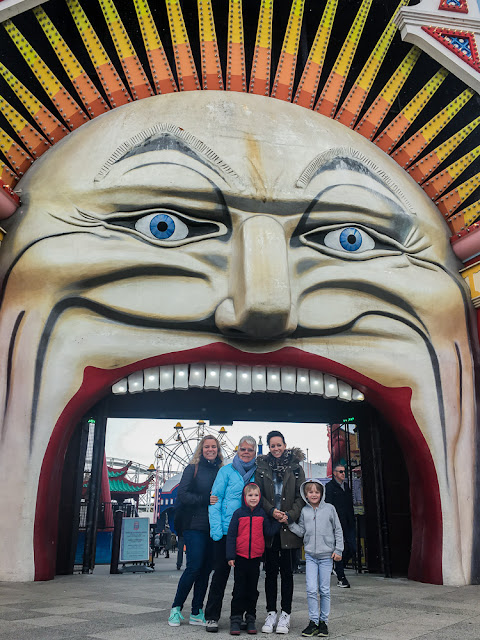 After the show we had lunch and then went to Luna Park. The kids had fun. 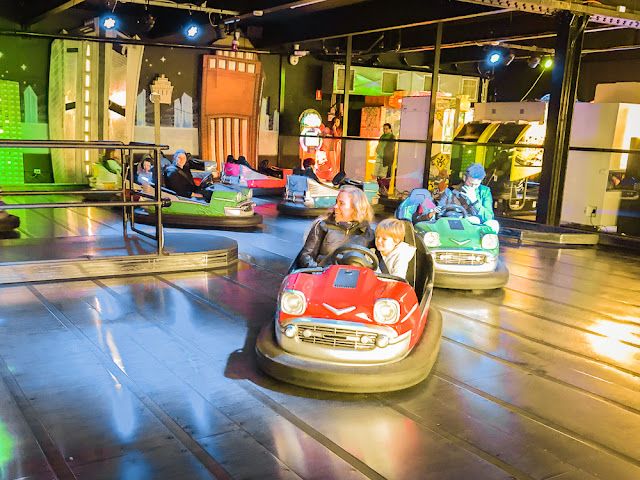 Aunty Carol and Fox challenge Bernie and Banjo on the Dodgem Cars. 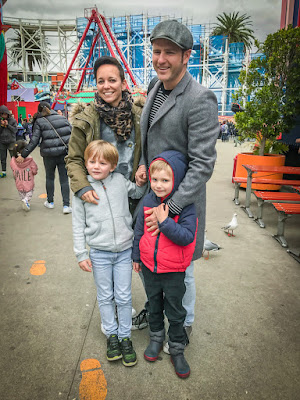 The Melbourne family. After the big day we went home for my last sleep in Melbourne. 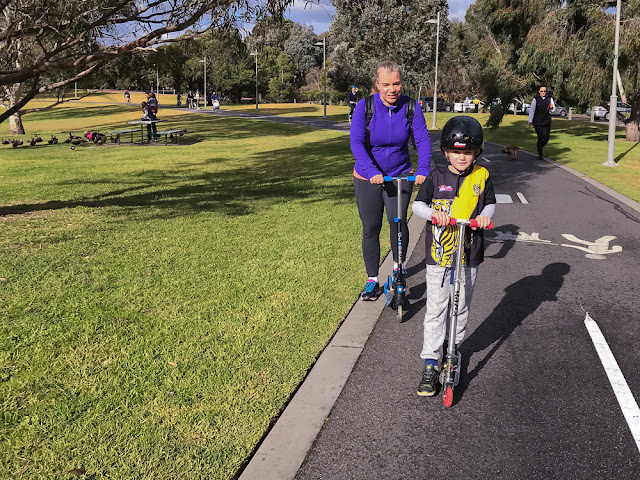 The next morning Carol and I took the boys to the park while Mum and Papa had some free time together. Carol and Fox scootered while Banjo chased the ducks. Then we all went to Yum Cha lunch.  After lunch we went to the airport, where Carol flew back to Sydney and I flew to warm Brisbane. It was nice to catch up with the family.

Posted by diane b 23 comments:

A WEEK IN COLD MELBOURNE

When most sensible people go north for winter holidays, I found myself winging my way south to Melbourne to spend time with the grands during their school holidays. Melbourne's hottest time of the day is colder than our coldest time of the day. I went with a case full of jackets and cords.

One day when mum and dad were at work and Banjo was at kindergarten, Fox took me for a walk. He was on his scooter and I walked fast to keep up. I had no idea where we were going but Fox was adamant that he new the way. It was a pretty walk through the parklands following a stream.
We walked about a three kilometres circuit and sure enough this little guy found our way home. 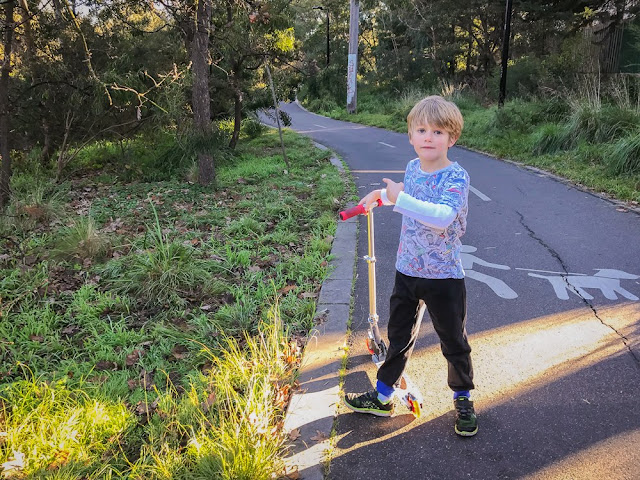 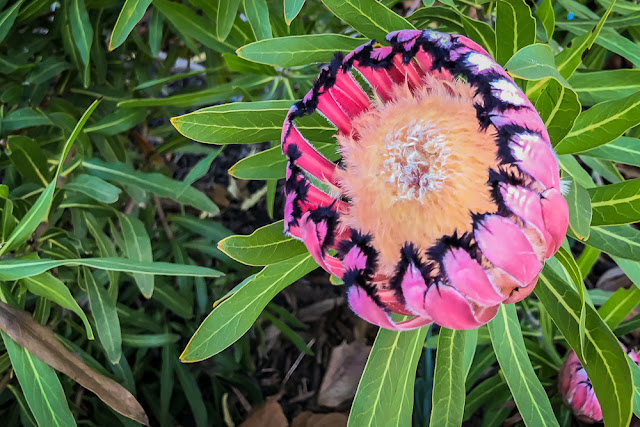 We passed some pretty gardens 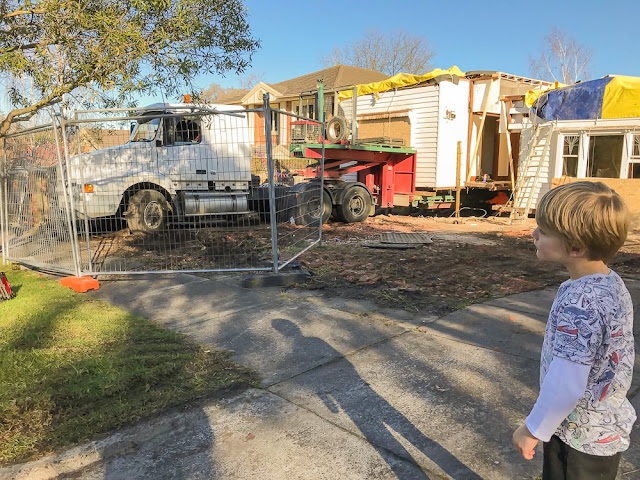 We watched the house next door being removed

After lunch we did it all again but this time with a football instead of a scooter. 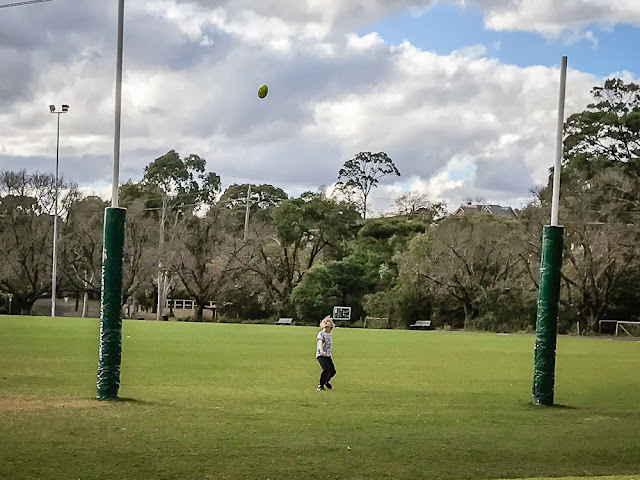 Fox loves AFL Football and he plays Auskick. He is easily able to kick goals while I run and get the ball and kick it back to him.

After some time I pleaded to go home for a rest. 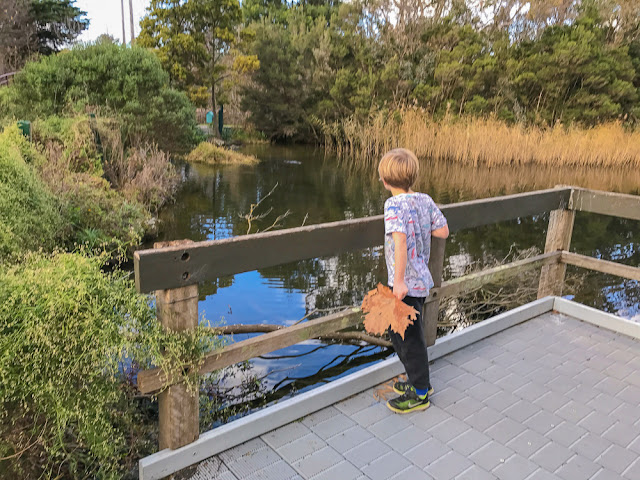 We stopped at the Glen Iris wetlands and looked for frogs. He found a big leaf for his little brother. 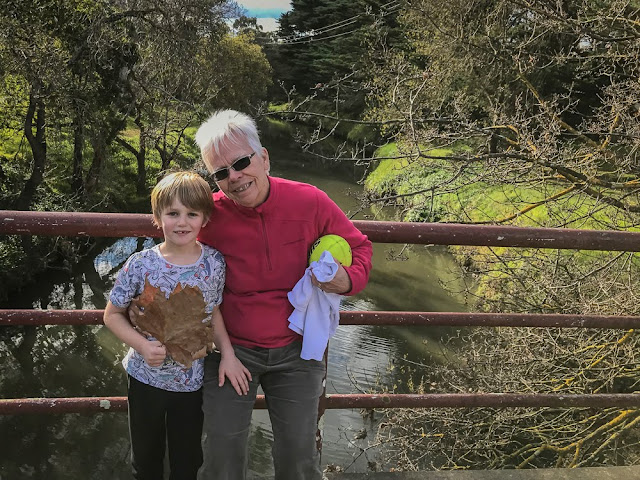 A passing cyclist offered to take our photo. Fox was very worried that I would drop the ball into the river. 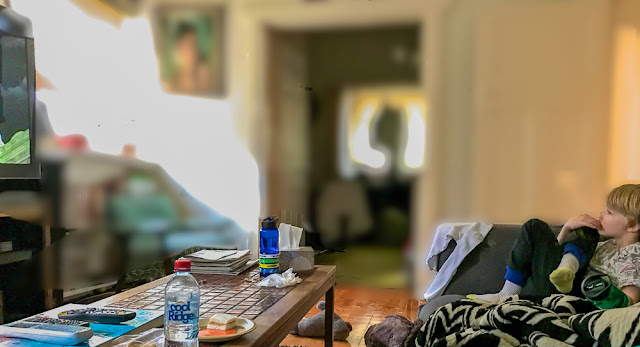 Finally we were home and a rest in front of TV was a blessing.
Posted by diane b 24 comments: