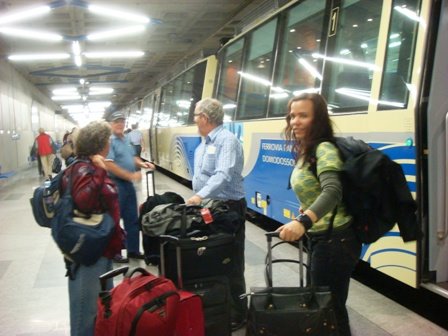 It was a long trip about 4 hours and we were happy to arrive ready for our last adventure in Europe. We booked into our hotel, which was in a great position near the lake but can't rave about the hotel. 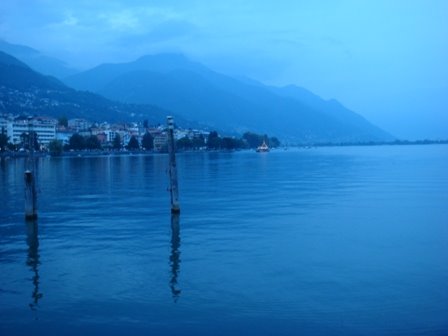 In the evening we went for a walk along the lake edge, it was very romantic, except I had developed a cough. 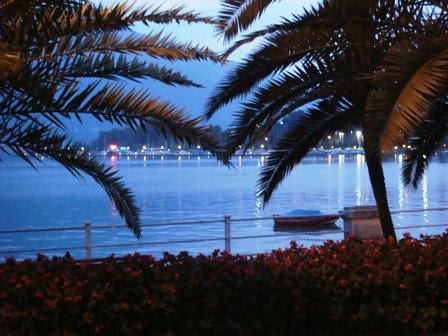 We went for a walk to discover the town. We are in the Italian speaking part of Switzerland and you can see the influence of the Latin love of colour in the buildings. 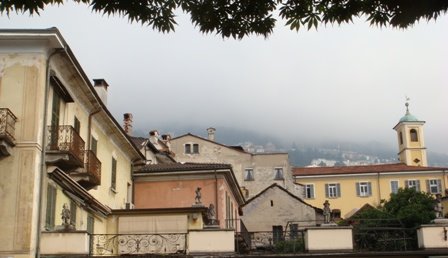 We walked up into the Old Town 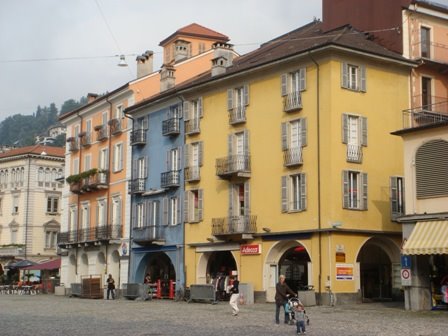 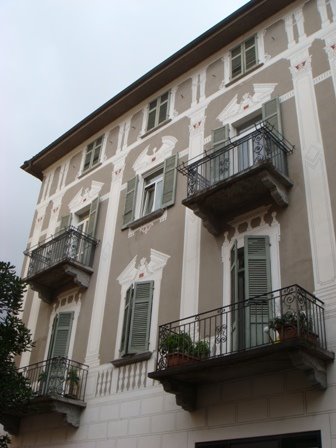 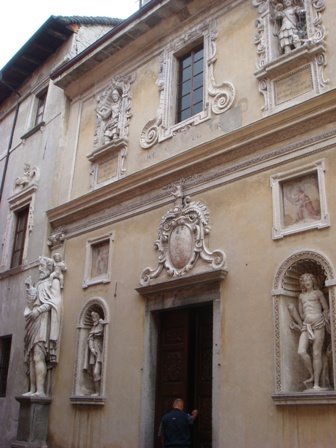 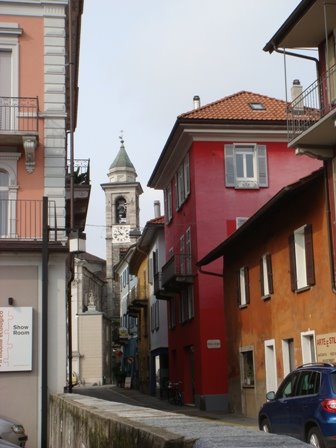 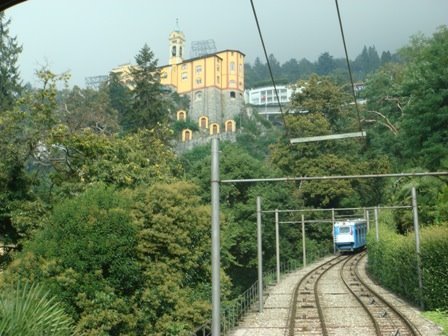 We found the funicular train and went up to the monks sanctuary called Madonna del Sasso. 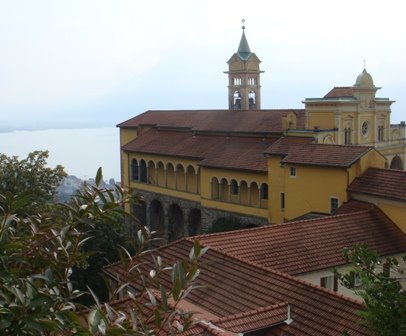 It is still a monastery today. It is high up on the hill overlooking Locarno. It was very misty this morning. 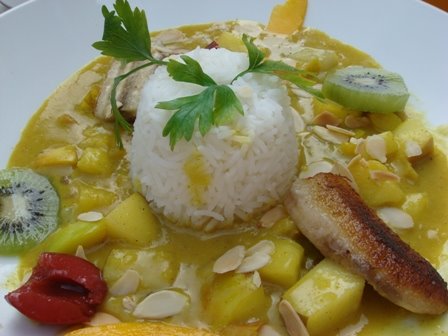 It was Paul's birthday today so we tried to find somewhere nice for a birthday lunch. I had fruit curry and...... 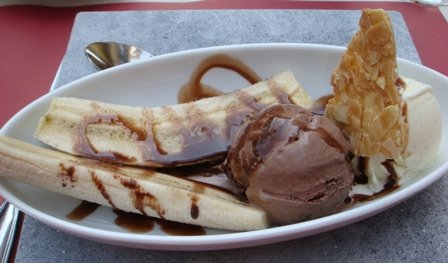 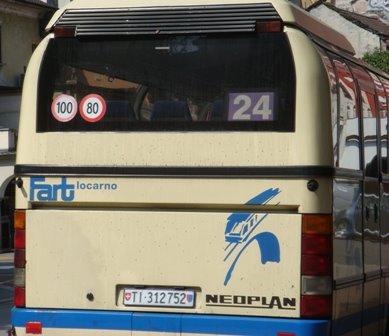 Then we caught the bus to Ascona. The bus company has an interesting anagram F.A.R.T. 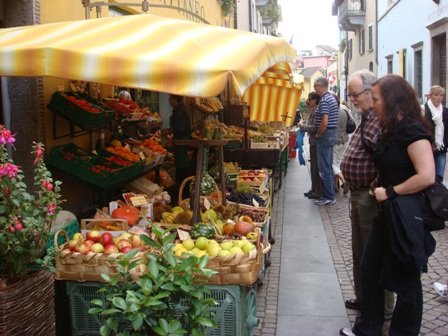 Ascona is a beautiful town on Lake Maggiore, the old streets are full of art and craft shops and market stalls. 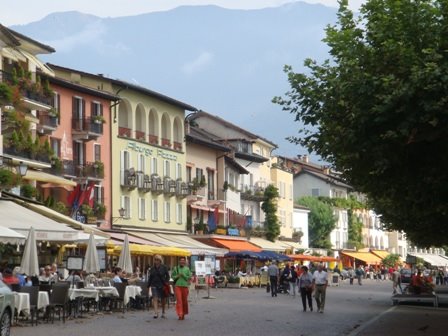 We walked down through the old town to the lake edge, where there are restaurants one after the other all facing the lake........ 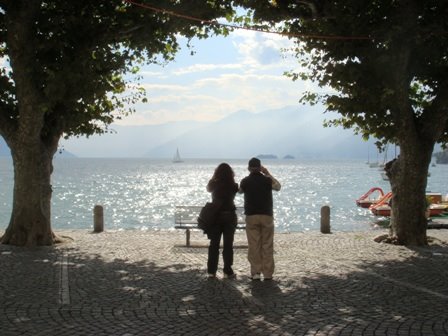 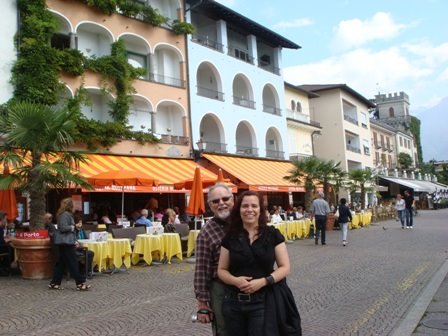 Bill always wanted to retire here if we ever had millions of dollars to buy a place, but he is happy just to be visiting with his daughter. 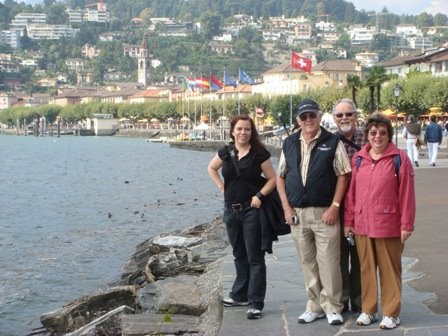 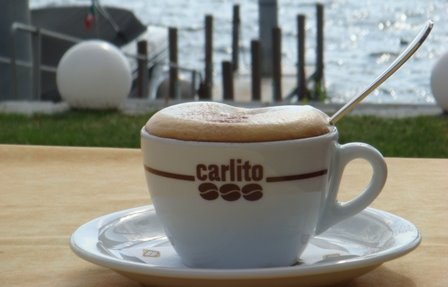 .......coffee. I remembered Kim's blog where she often has pics of her coffee breaks and thought she might like this one. Bill was telling us stories of when he used to come camping here with his parents when he was young. No camping ground here now. 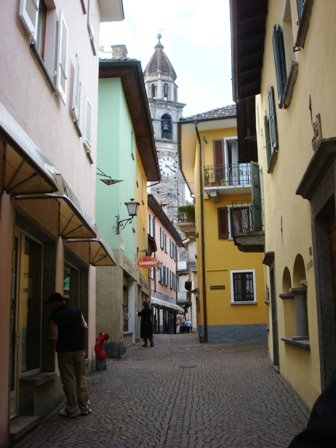 We walked back up through the quaint streets and caught the bus back to Locarno. That night my cough got worse.


We decided on a free time day today and mix with the locals. Carol and I strolled to the lake with Carol's sketching pad and pencils. We sat in the warm sun and sketched and I coughed. 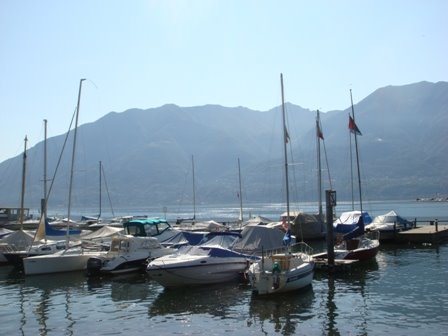 Bill, Paul and Helen went to the town centre where there was a market and concert bands playing. We joined them for lunch. 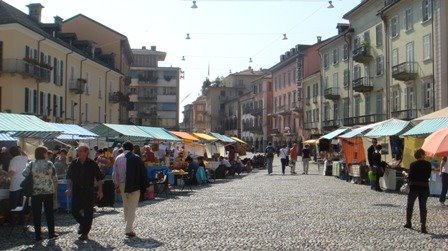 .....I was fascinated with the tiny cobble stones.
That evening Bill and Carol took me to see a doctor at the hospital to get something for my bronchitis as I was worried the authorities would not let me fly if I was sick and we were flying home in 2 days. It was a very modern hospital and I didn't have to wait to see the very nice Italian speaking doctor. Luckily he could speak a little English too. He gave me a good check up, blood test, X-Ray and intravenous antibiotic. He prescribed pain killers and cough mixture. After paying 400 franks ($425 AD) we were on our way to dinner in the square with another concert. Then home to bed hoping to feel better in the morning. 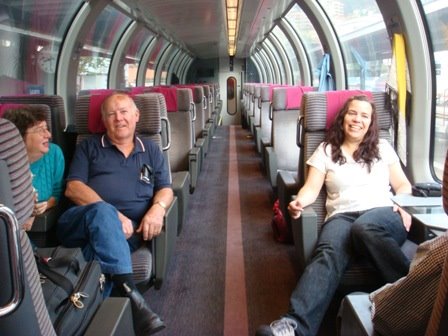 ...our long train journey back to Zurich. It was a very comfortable train and almost empty. Everyone seems happy to be going home, especially me as I didn't feel any better. After about three and a half hours we were back in Zurich and time to say goodbye to our darling daughter. She caught a connecting train to the airport and flew back to London and her husband. It was wonderful to have her company for 15 days in such an exotic country.

We stayed over night in Zurich and filled in time waiting for take off time by sight seeing on the trams. At the airport I dosed up with pain killers, cough mixture and asthma inhaler. desperately hoping not to have a coughing fit while booking in or getting on the plane. Luckily I got on board without being identified as being unwell. Thank goodness I didn't have too many coughing episodes during the 13 hour flight to Hong Kong.

We arrived in Hong Kong at the same time as a category 8 typhoon. Our plane was one of the last to land before they closed the airport. Those with connections to Australia or anywhere couldn't go. Once again we were lucky as we had planned to stay overnight in Hong Kong to break the long journey home. So we were picked up by the Hotel transfer company and hurriedly made our way to the hotel. People had been told to go home and take shelter. There were hundreds at bus stops and train stations, with their umbrellas being blown inside out. The trees were bending over and we were soon in our cosy hotel. We were happy to have dinner there and go to bed.

The typhoon had passed but not my coughing so I stayed in bed, while Helen and Paul explored the local area. Bill found the hotel's internet corner. The plane wasn't leaving until midnight, luckily we had a late book out time at 4:00 pm. 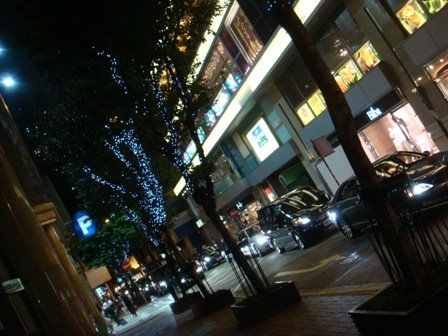 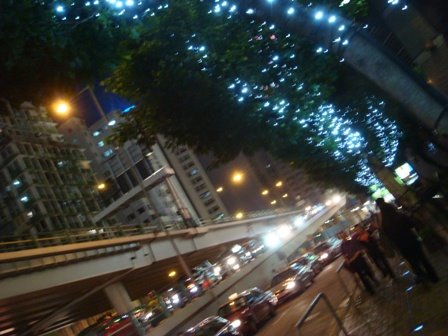 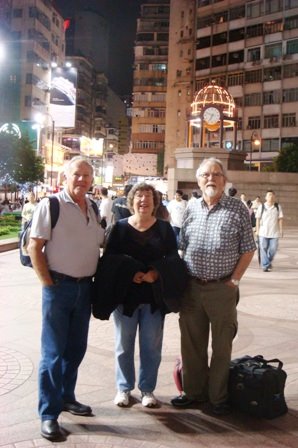 We walked around the huge shopping complex close by. I found it a little easier to breathe in the humid air. The antibiotics weren't working and once again I was worried about being detected as a sickie and not be able to fly home tonight. At the airport I dosed myself up again and managed to suppress coughing until we were in the air. Eight hours later we were HOME.

It was one of the best adventures I have ever had, now that I'm better I only remember the great times we had.
Posted by diane b