WALK IN THE WOODS

Three friends and I walk in the forest next to our village five mornings a week. Mostly we stick to our usual route but sometimes we take a different track. One day we went down to the creek and back up. On the way we saw a small flock of cockatoos there were six altogether but I only captured three of them with my phone. I've discovered phones are not the best for photographing birds, but it is much lighter than a DSLR to carry on a morning walk. 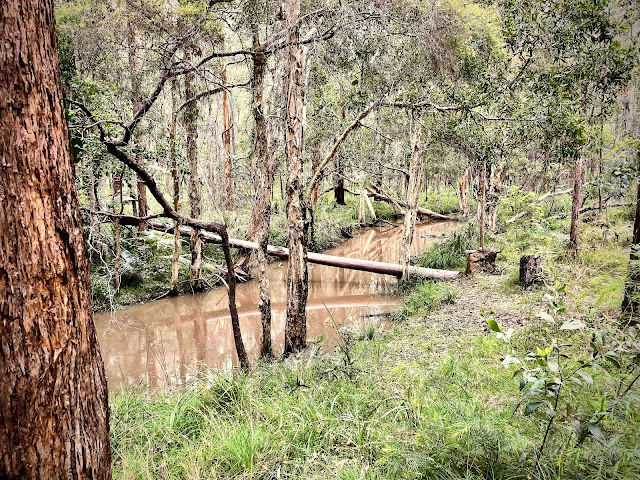 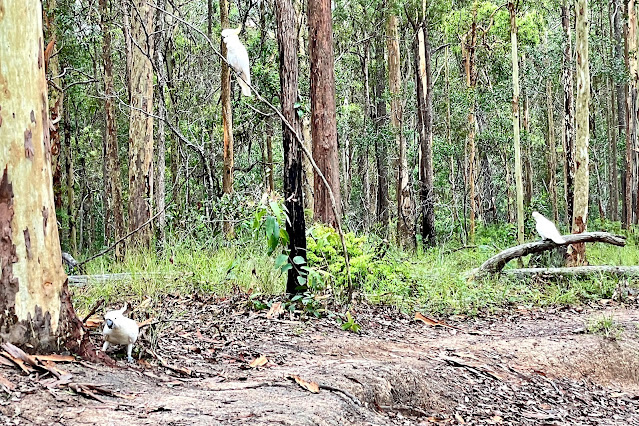 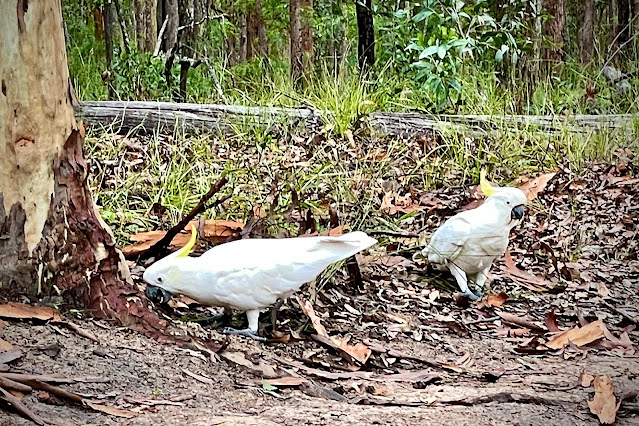 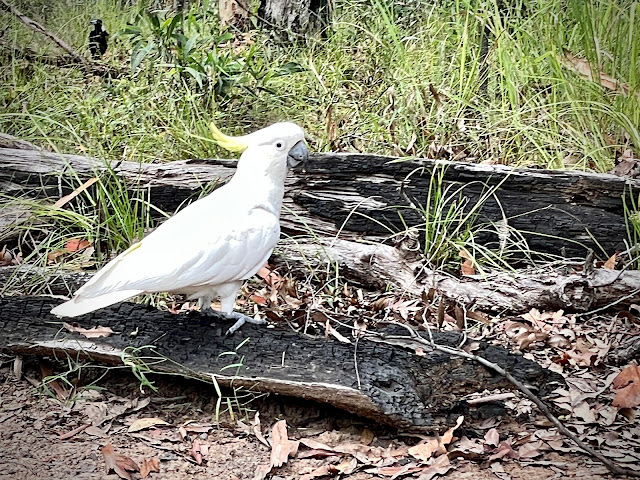 Posted by diane b 13 comments:

A few residents got together and decided it would be a good idea to organise a social meal together once a month. The idea was to help single people enjoy having dinner with company. So they decided to order in Pizza but you could bring your own meal if you preferred. Three ladies work together to collect Pizza orders and then send them to the local family run Pizza shop. They cook up to 70 pizza's and deliver them to our community centre. Everyone gets the pizza they ordered and we bring a drink to enjoy with the pizza. The company is good and it is great for the singles but a lot of the couples come too. Well done to the few who organise it all. 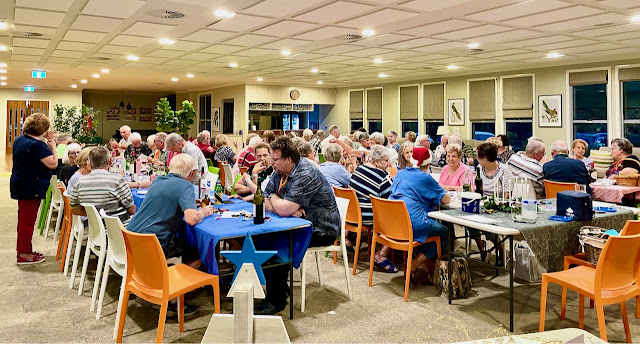 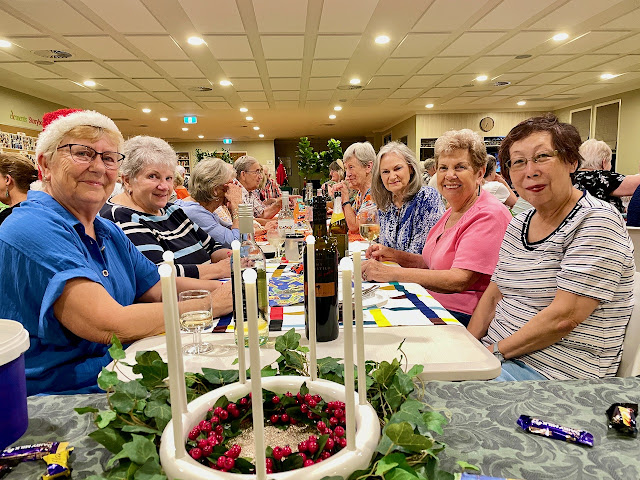 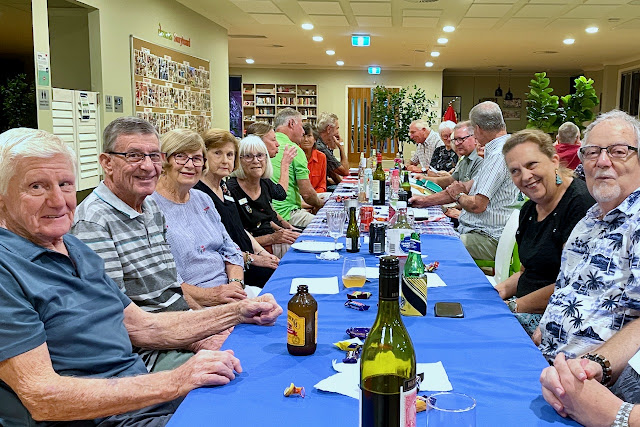 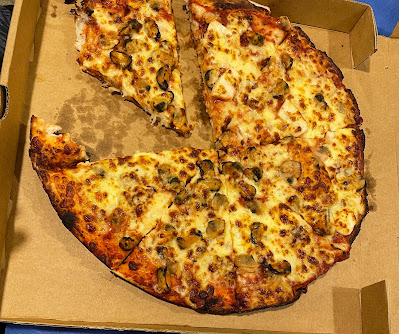 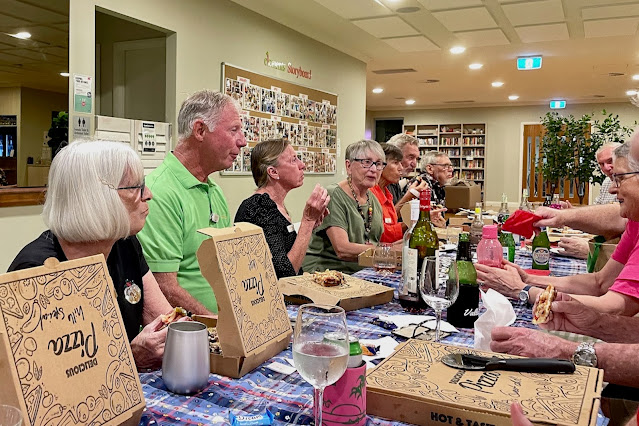 Posted by diane b 15 comments:

Melbourne Cup Day has been observed in Australia since the first race was held at the Flemington Racecourse in Victoria in 1861.

Melbourne Cup Day is one of Australia’s most popular social and racing events. The main racing event takes place at the Flemington Racecourse in Melbourne, Victoria. More than 100,000 people usually attend Flemington Racecourse. Local races are held throughout the country on this day and when the main race of the day occurs at the Flemington Racecourse it is televised on screens at race tracks across Australia. The race is televised live to an audience of about 650 million people worldwide. Many people stop what they are doing shortly before 3pm on Melbourne Cup Day to watch or listen to the main race either via television, Internet or the radio.

At the races, people dress up – many women wear their best or most colorful hats and dresses, with some participating in fashion parades on the field. Marquees are set up for VIP guests, including local, national and international celebrities who attend this festive event. Champagne, wine and gourmet finger foods are usually served on this day.

Many offices across the Australia stop work closer to the time of the main race to celebrate the event. Activities include office parties that feature hat and dress competitions, staff lunches at restaurants and afternoon teas where a television is available so workers can watch the main race. Bets are made on this day – even those who usually do not bet try their luck with a small wager or entry into a sweep, which is a lottery in which each ticket holder is matched with a randomly drawn horse. There are some Australians who deem horse racing as a cruel sport and have been vocal in their protests over the years.
We celebrated Melbourne Cup Day in our community centre with the staff and residents. We had the traditional fare of finger food in the way of prawns and chicken and bread rolls. This year one of the residents made salads too. People dressed in their best or funniest with interesting hats.
One of the residents makes the hats and rents them out each year for $5 and then she donates the money to an animal shelter. 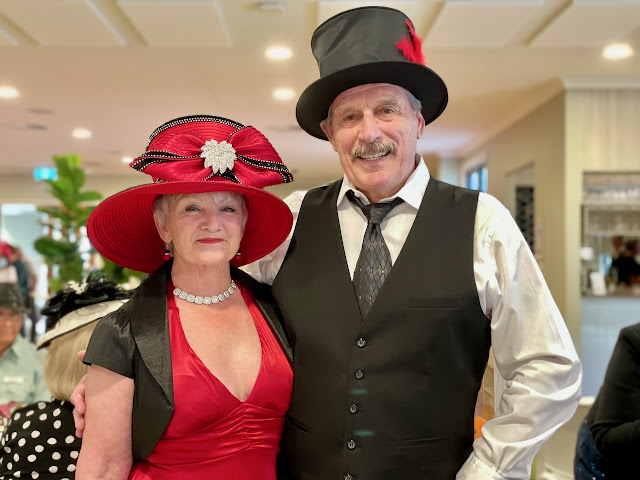 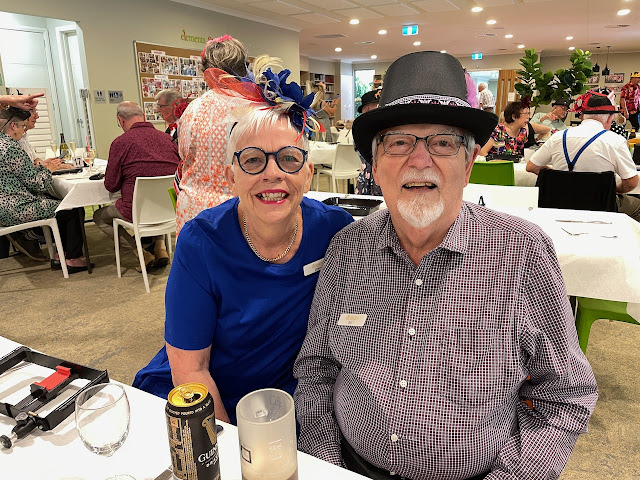 We enjoyed the day. 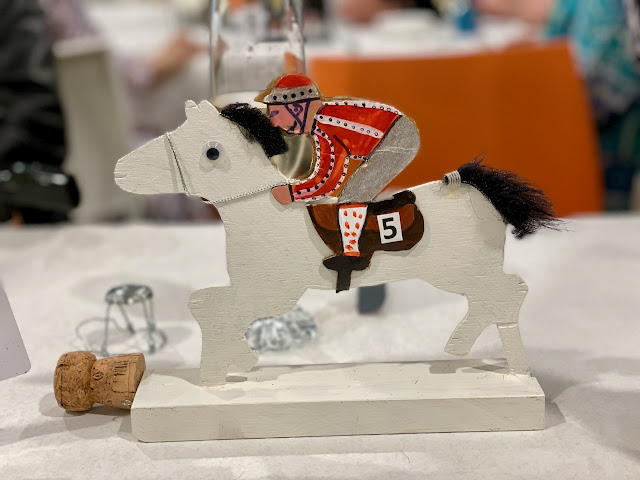 Table settings made by the craft group. 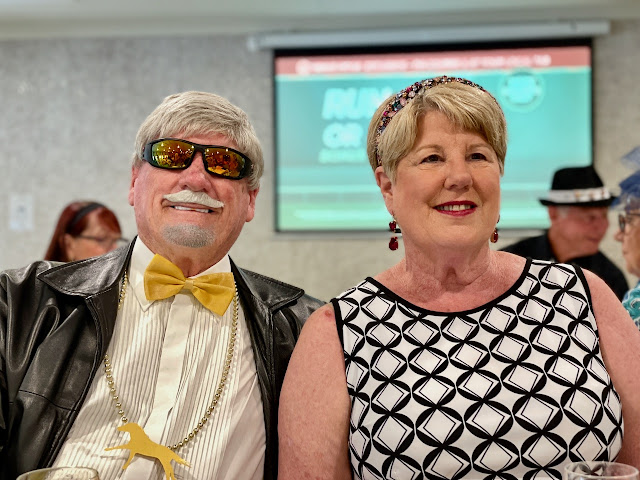 Some dressed up. Our friends Ros and Len. 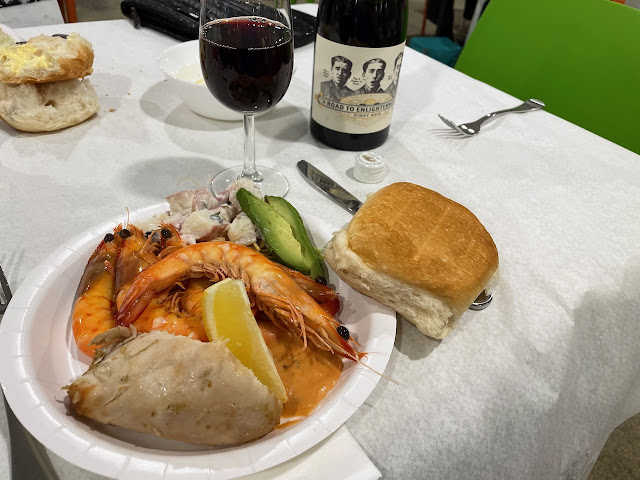 Traditional fare, prawns, chicken, bread roll and salad. Our CEO paid for the event but we paid $20 which she donated to our favourite charity. 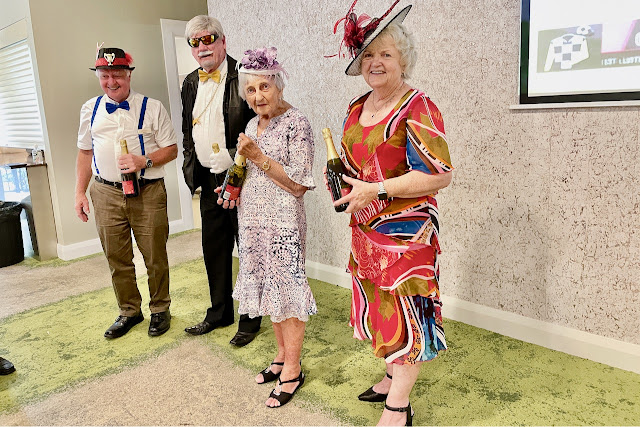 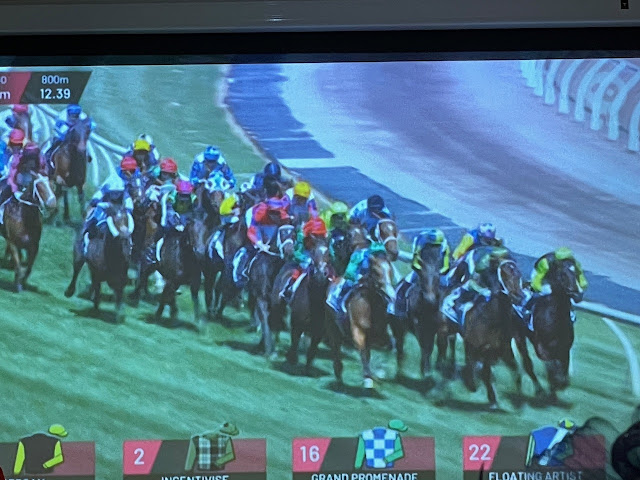 We watched the race on a big screen. 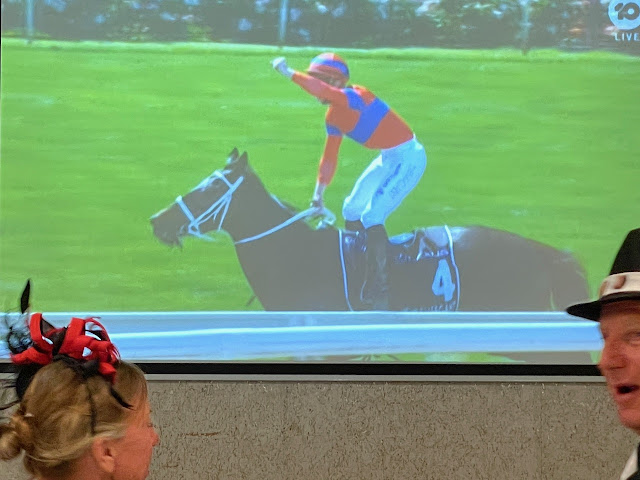 We have made friends with an English couple, who have moved into the village. They have been here for a few years now but we were amazed that they came straight from London to the village at their age. It turns out that their son and grandchildren are living here in Springwood close to the village. They have assimilated very well into the Australian way of life. Eddie loves snakes so he is in his element here. He has trained to be a snake catcher and now has a local business of catching snakes that slither into peoples yards and houses. We often go out to lunch with them. It was his birthday and he celebrated at the pool area of the village. They organised the local Thai Restaurant to provide the food. They delivered it arranged in lovely bowls. 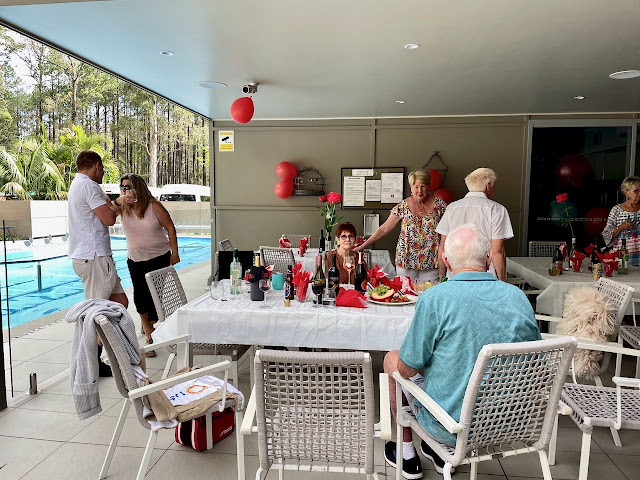 Party beside the pool. 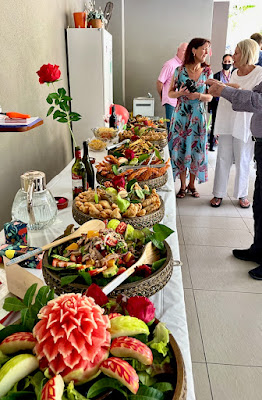 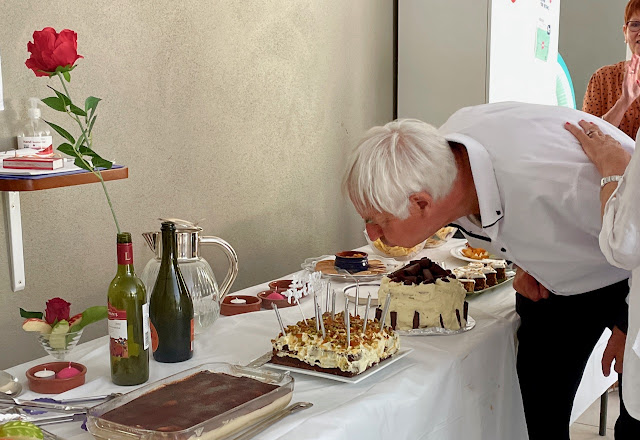 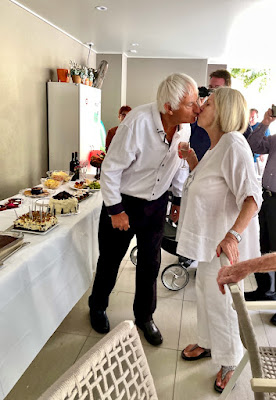 His lovely wife Caren, congratulates him. 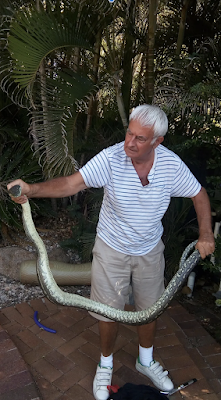 Eddie the snake catcher.
Posted by diane b 14 comments: