A DULL DAY IN PERTH

During our last trip I left you all stranded at the Pinnacles. So I will take you back to the tour bus and we drive south for a few hours and arrive in Perth, the capital city of Western Australia. I like Perth it is a modern city situated on the Swan River. It is a growing city and many people are moving there to work in the mining industry, which is booming at the moment, due to the demand of developing countries on our mineral resources.

We had a farewell dinner at the hotel as this was the last night of our Western Wildflower Wonderland Tour. The next day we didn't have to be at the airport until midday so we took an early morning walk through the streets of Perth. It was a dull, cold day and difficult to get good shots.

We found Hay St. Mall because, as usual, Bill needed to go to an Apple Store. I'm sure he wants to visit every Apple Store in the world. I've lost count of how many we've just had to visit. 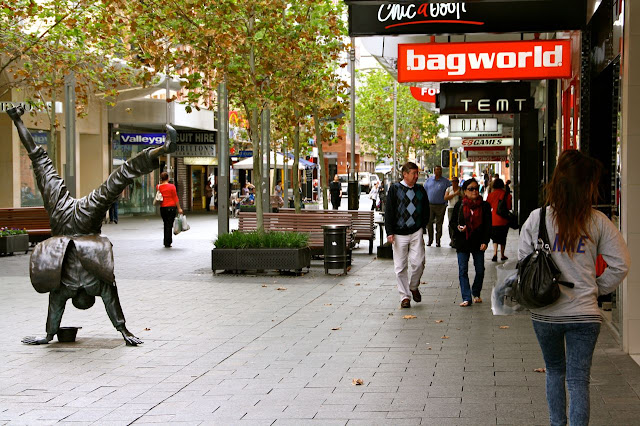 Anyway, while waiting for him I saw this sculpture of Percy Button. He was a street entertainer between the 20's and 30's. The sculpture celebrates the spirit of the street. The artists were Charlie Smith and Joan Walshe-Smith. 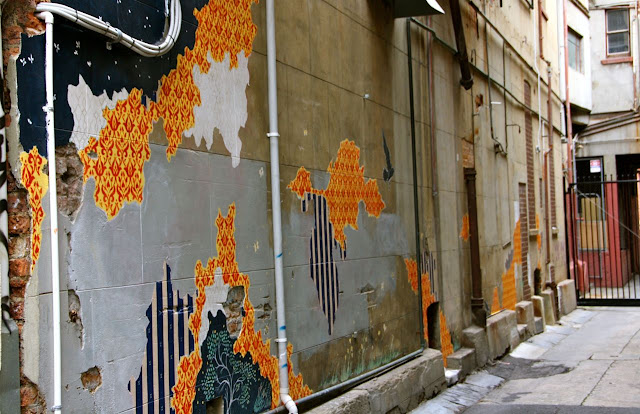 Then I found a lane with interesting decoration. I thought Julie from Sydney Eye would like this. 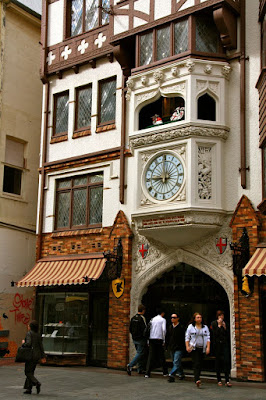 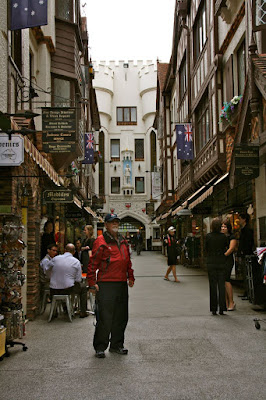 After Bill had bought the latest Apple product we went looking for a coffee shop, another of his pleasures when supposedly sight
seeing.

We came across London Court a gorgeous little lane that is full of interesting shops with an English feel. However, the clock at the entrance is a replica of the Great Clock of Rouen in France. Every 15 mins it chimes and 'The Tournement of the Armoured Knights' circle in the window above the clock. 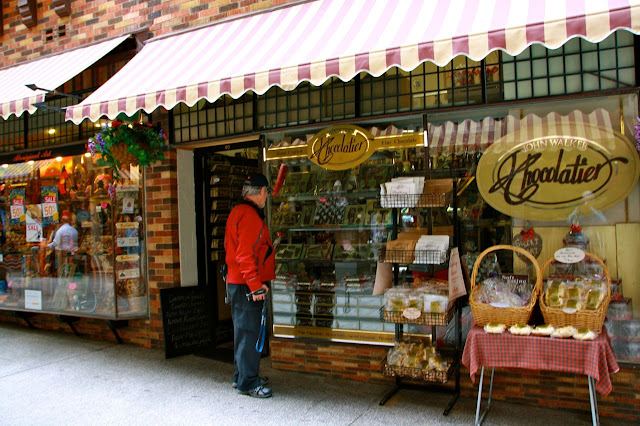 We only looked at the chocolates but I still put on weight. 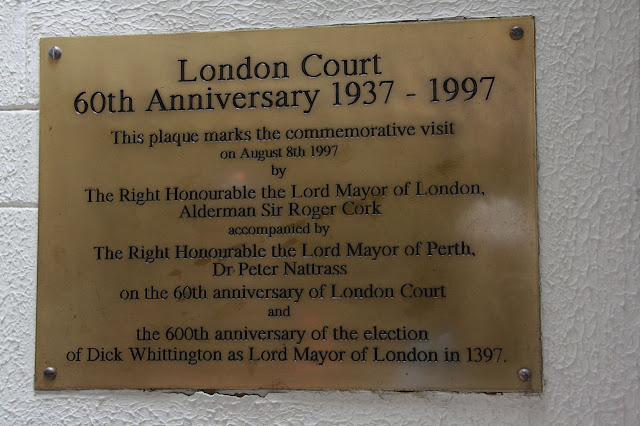 We found the always needed coffee shop and while waiting for the coffee I noticed this interesting group of sculptures through the window. They were business men through the ages walking to the entrance of the St Martins business centre. 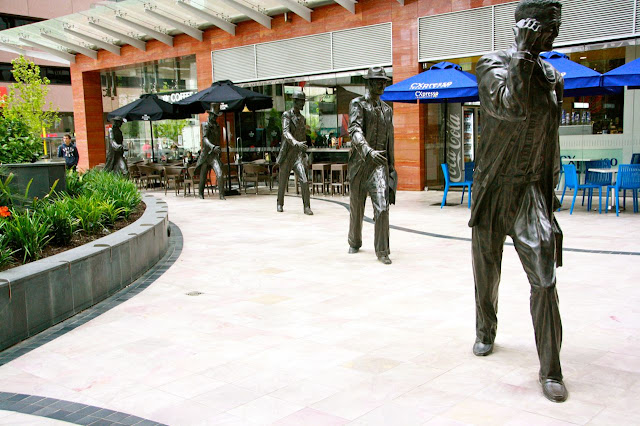 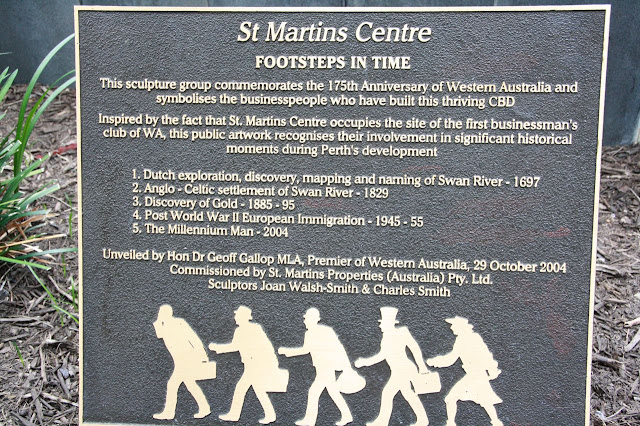 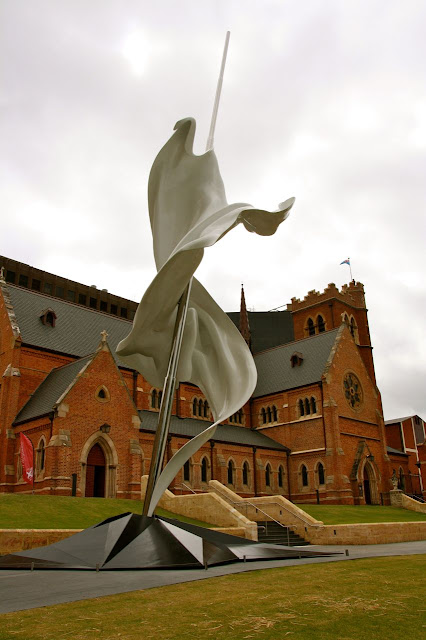 Perth has many sculptures, almost one on every corner. This one in front of St George's Cathedral on St George's Tce is a beauty. It is a very modern interpretation of St George and the dragon. It had a beautiful flowing form. St George's cape is billowing around his lance. The sculpture is named Ascalon after the lance.

A $500,000 donation by Mark Creasy enabled the Dean and Chapter of the cathedral to commission local artists Marcus Canning and Christian de Vertri. They had Glen Swarbuick make the 18m cloak from a hybrid composite. The sculpture is said to "evoke a sense of righteous power and victory over a force of darkness and oppression" 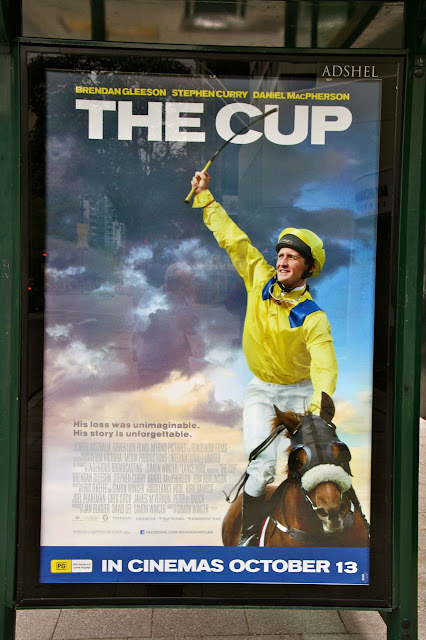 We were heading back to the hotel to pick up our bags and get driven to the airport when I saw a picture of our daughter Sonya's brother in law, Stephen Curry, on a bus stand. He is an actor and has the lead role in the film "The Cup".


Soon we were on the plane heading towards Adelaide, the capital of South Australia, where we would meet more friends for another tour. I hope you will join me.
Posted by diane b