The people of Peterborough erected a statue of "Bob The Railway Dog" in memory of this adventurous little dog believed to be a German Collie Dog mix. His story is below taken from Wikipedia. 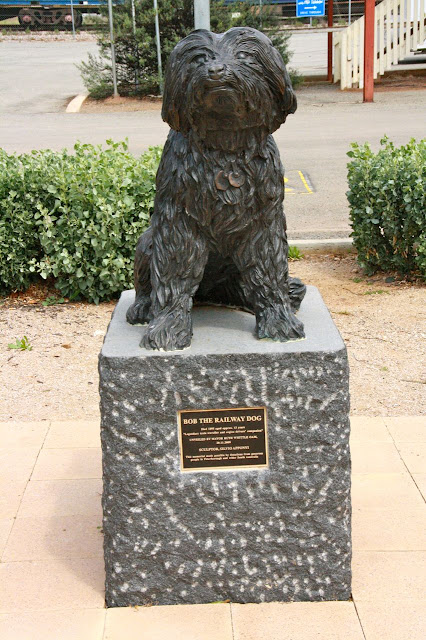 Bob first experienced the railway life, when, as a young dog, he took a fancy to the railway workers building near Strathalbyn and followed some of the navvies to the line. He was brought back to his owner, the publican of the Macclesfield Hotel, two or three times before finally disappearing; he was about 9 months old at the time.
Bob was, it was believed, picked up as a stray in Adelaide. His true railway career appears to commence not long after he was being consigned from Adelaide along with fifty other dogs to Quorn, to be used to exterminate rabbits. He "broke pack"and was obtained as a stray from the Police in Port Augusta by William Seth Ferry, then working as a Special Guard at Petersburg as Peterborough was then known. Ferry "registered him right away" and is recorded as noting he acquired Bob on 24 September 1884.
Bob was known to travel on trains to and from Petersburg often sitting in the front of the coal space in the locomotive tender, travelling many thousands of miles. According to the Petersburg Times: " His favourite place on a Yankee engine; the big whistle and belching smokestack seem(ed) to have an irresistible attraction for him....he lived on the fat of the land , and was not particular from whom he accepted his dinner"
Every time he heard the train whistle he would run and jump onto the footplate of the engine. Some say he died in Adelaide others say Peterborough. He was 17 years old. His body was displayed in a local pub.
His collar is on display in the National Railway Museum, Port Adelaide, along with photographs and other artifacts. Bob is remembered today by railway workers and historians alike.

The following poem was published in the Advertiser on 17 August 1895:

Home-keeping dogs have homely wits,
Their notions tame and poor;
I scorn the dog who humbly sits
Before the cottage door,
Or those who weary vigils keep,
Or follow lovely kine;
A dreary life midst stupid sheep
Shall ne'er be lot of mine.

For free from thrall I travel far,
No fixed abode I own;
I leap aboard a railway car;
By every one I' know;
Today I am here, tomorrow brings
Me miles and miles away;
Borne swiftly on steams rushing wings,
I see fresh friends each day.

Each Driver from the footplate hales
My coming with delight;
I gain from all upon the rails;
A welcome ever bright;
I share the perils of the line
with mates from end to end,
Who would not for a silver mine
Have harm befall their friend

Let other dogs snarl and fight,
And round the city prowl,
Or render hideous the night
With unmelodious howl.
I have a cheery bark for all,
No ties my travels clog;
I hear the whistle, that's the call
For Bob, the driver's dog.