I have been looking forward to this day for a long time. A helicopter ride over the Bungle Bungle Range in Purnululu National Park.

As you can see the helicopter had no doors. We wore headsets so we could hear the pilot telling us about this unusual sandstone formation. 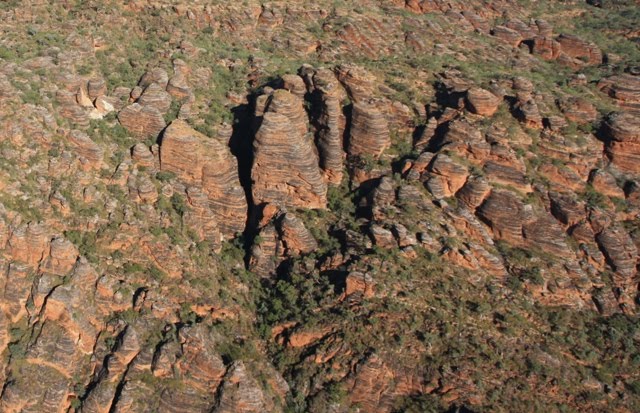 The Bungle Bungles are the remains of a large sedimentary rock mass from 360 million years ago. Rivers deposited layers of sediment, which eventually turned into sandstone. The last 20 million years of weathering has produced the spectacular, striped,beehive domes we see today. 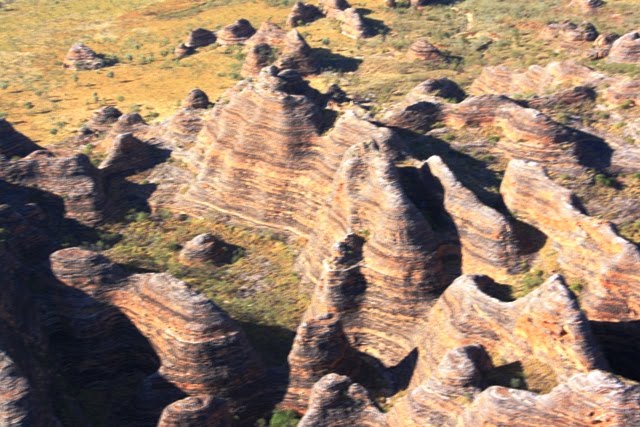 The Aborigines have lived in this area for 20,000 years but it wasn't until 1983 when a TV documentary was shown about the Bungle Bungles that they became known world wide. 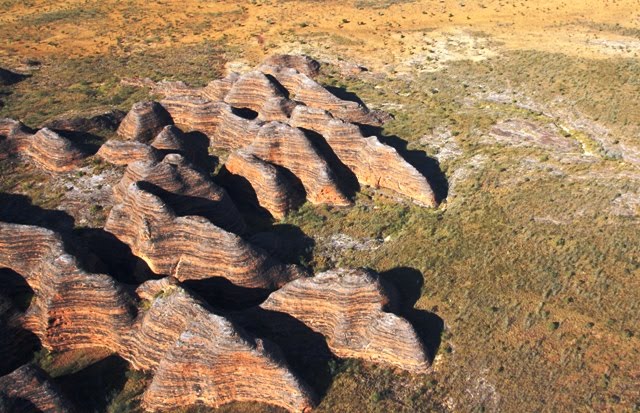 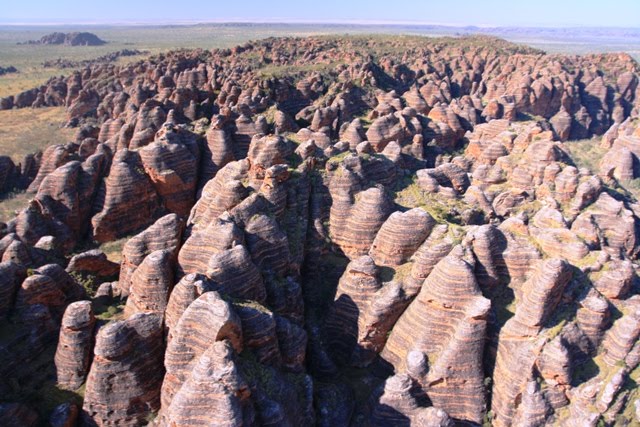 The stripes are formed by the different texture of the layers. The brown stripe has more clay and holds the moisture longer, which supports the growth of a bacteria. The orange stripe has less clay and dries out quickly and the bacteria can't grow. 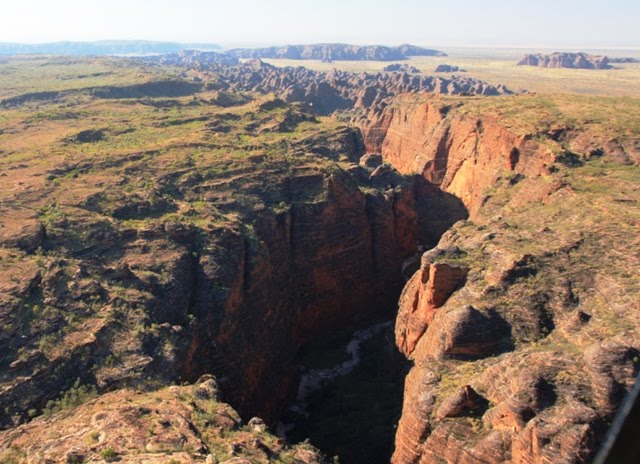 Gorges and chasms wind there way through the ranges. 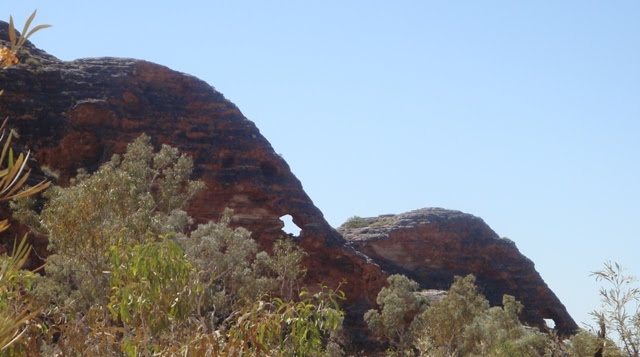 After the exciting helicopter ride went by bus past Elephant Rock on the way to Cathedral Gorge for a walk. 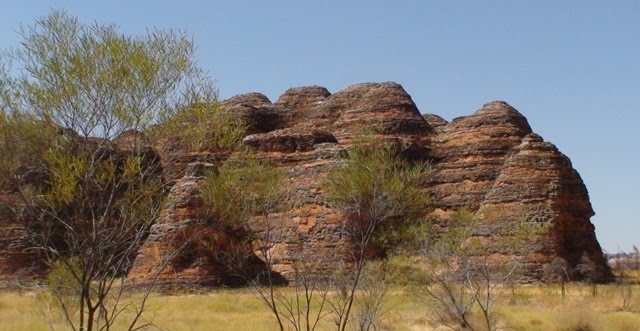 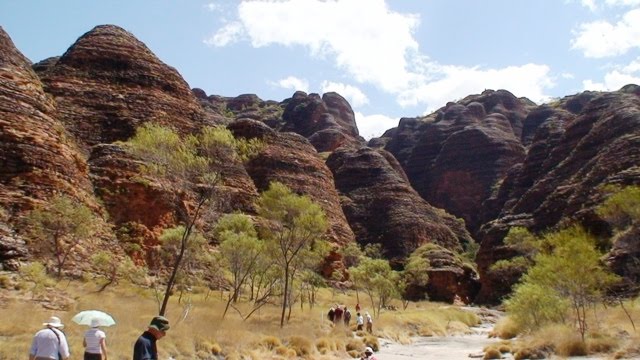 We put on hats, sunscreen and took a bottle of water and set off in the raging heat. 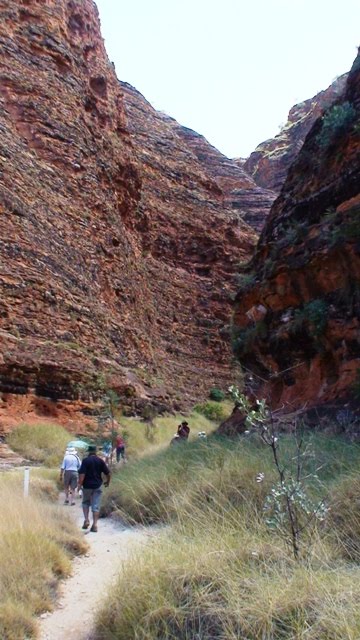 We were glad to reach the shade of the gorge. 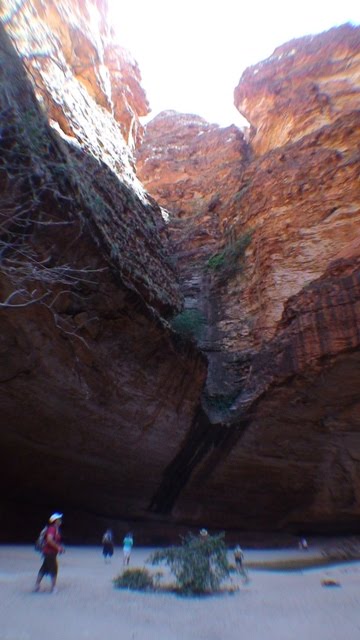 The gorge came to an end where the walls towered around us like the walls of a cathedral. 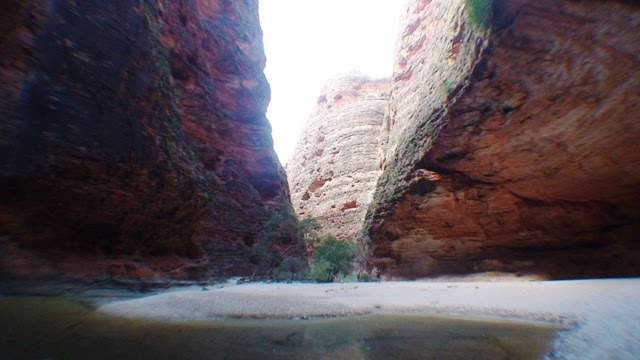 Looking out of the cathedral over a pool towards the track where we had entered. 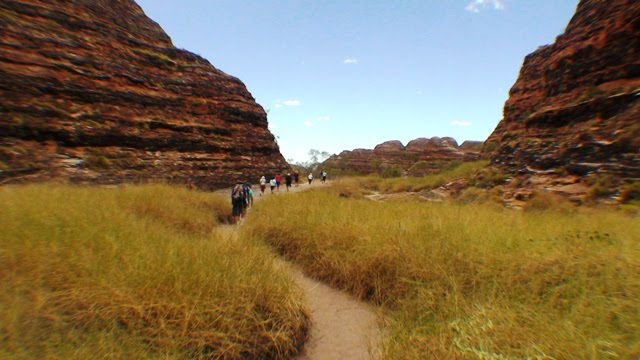 Then back to the bus and camp for lunch. After lunch we were taken on another walk. 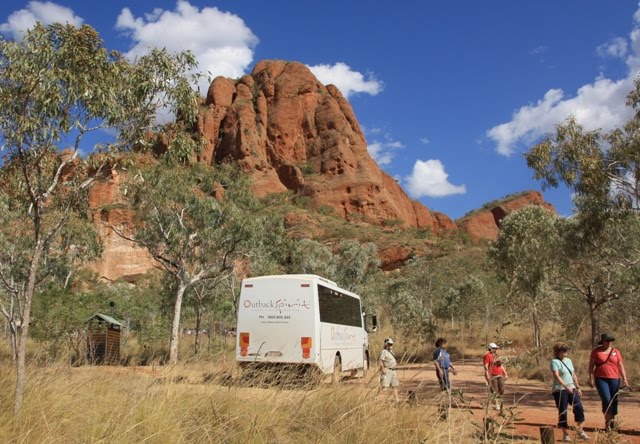 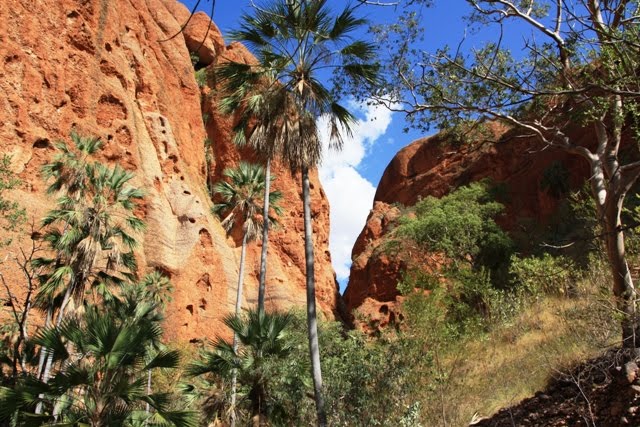 We set off to Echidna Chasm. 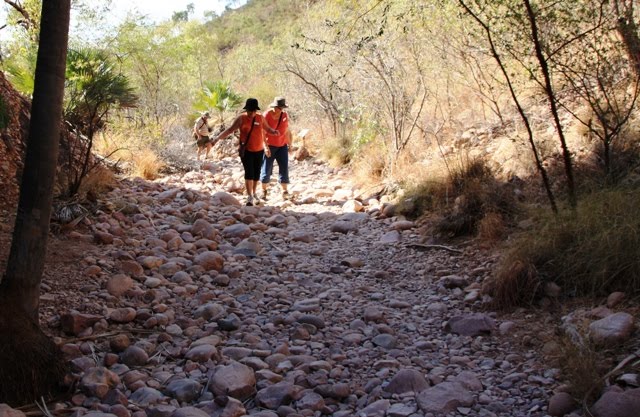 The path was rocky and a little hard going. 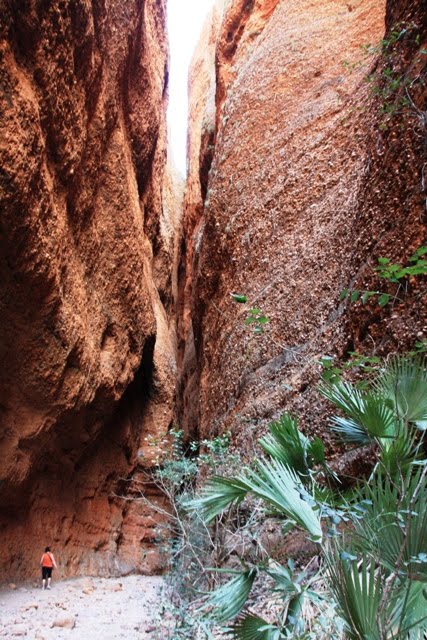 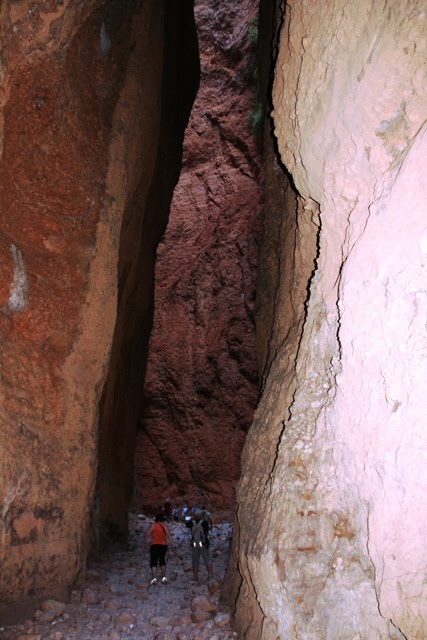 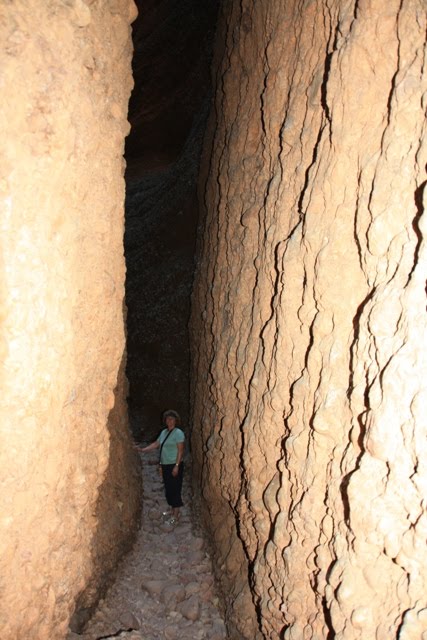 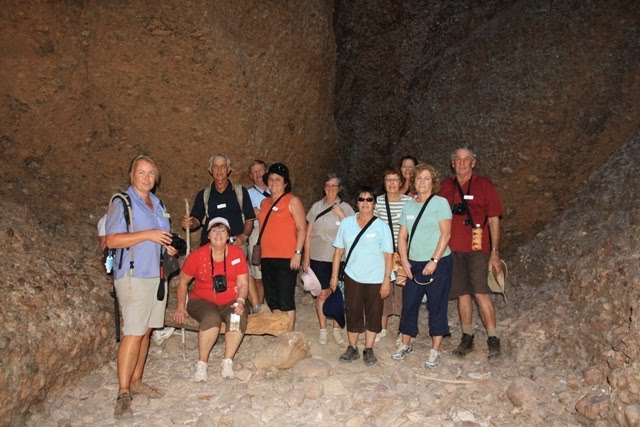 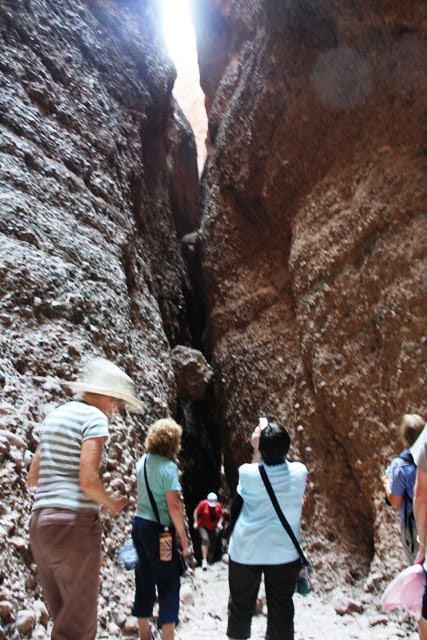 Then it was back to scrambling over rocks and follow the twisting turning path out. 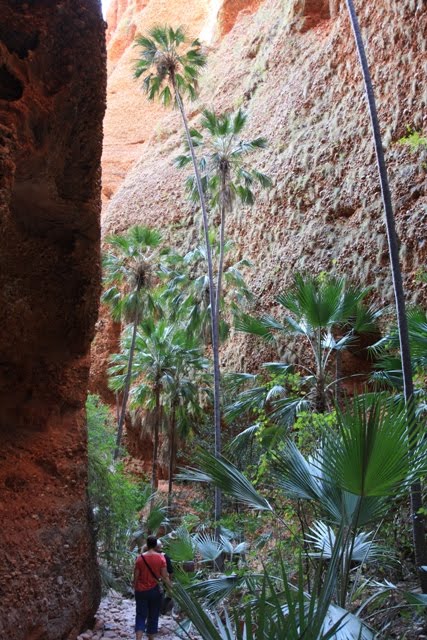 Kim, our tour guide, had a surprise for us on the way back to camp. 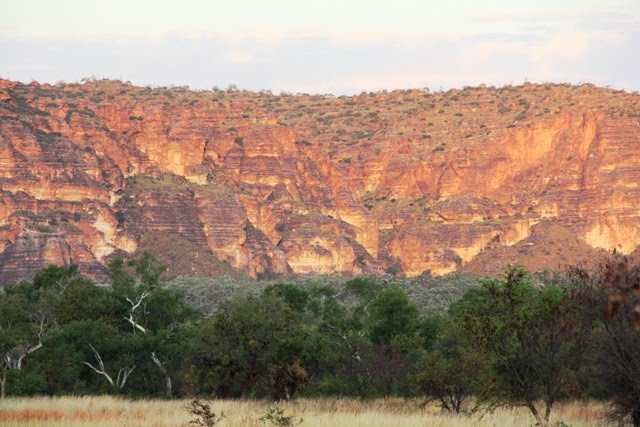 She got Ben to stop the bus at a rest area so we could enjoy the sunset on the ranges. Then Kim produced an afternoon tea spread of nibblies, cheese and biscuits with Champagne. 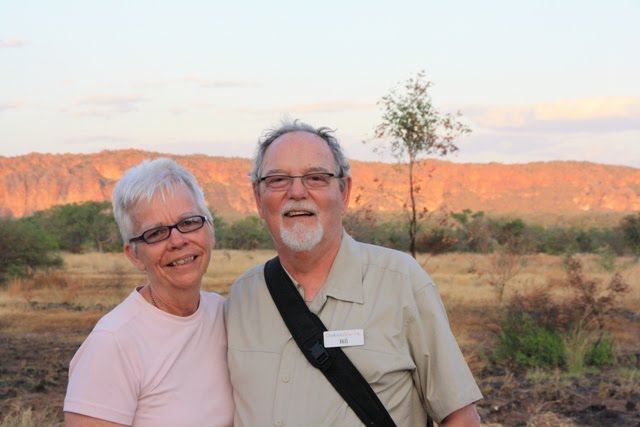 It was a delightful end of an adventurous day. We were living it up in the outback.

To enjoy the flight over the Bungle Bungles see Bill's video HERE or on my sidebar.