Today was mostly a transit day, driving from Fitzroy Crossing to Purnululu National Park where we will see the Bungle Bungle rock formations. Looking out of the bus window we could see miles of nothing. We were really in the outback now. 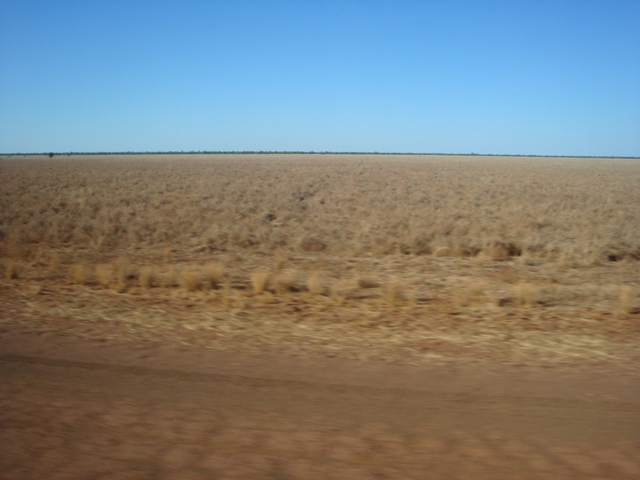 I was fascinated with the the little mounds of grass growing everywhere.

It is called Spinnifex Grass. 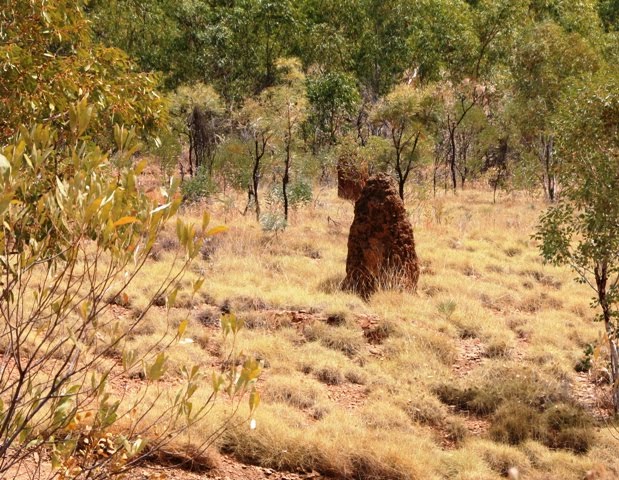 A termite mound amongst the Spinnifex. 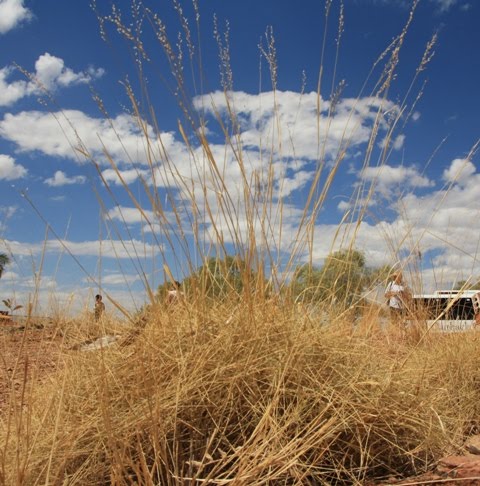 A closer look at a clump of Spinnifex. It is a tangled mess of very spiny grass, with some taller stalks poking out the top. It is very sharp grass and stabs you if you touch it. 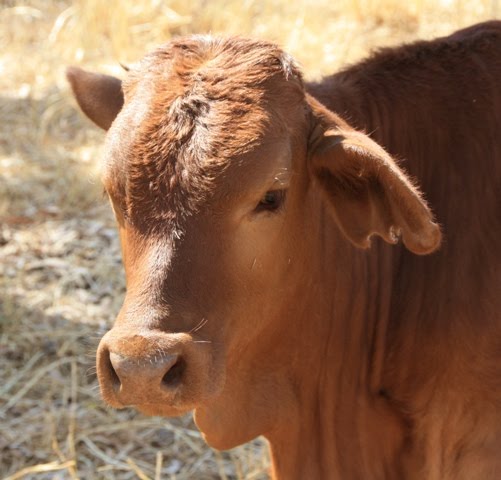 We stopped for a picnic morning tea and to say hello to some cows. There are huge cattle stations (ranches) in Western Australia. Some cover millions of acres. The cattle are especially bred to withstand heat and drought. Some are English Herefords crossed with Asian Brahmans. 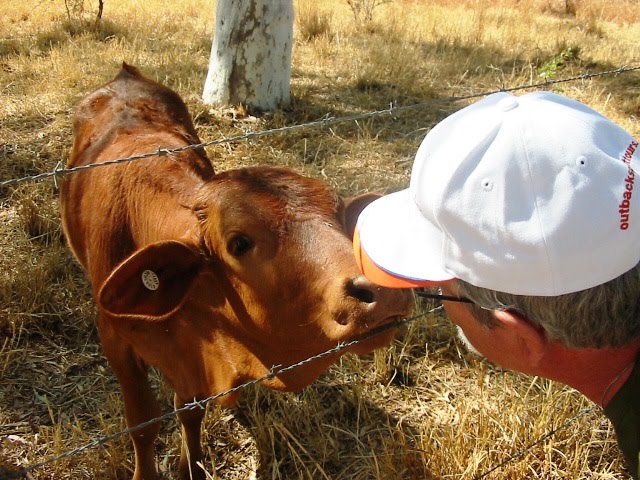 Bill gets a kiss from a calf. Then back in the bus for a few more hundred kilometres. 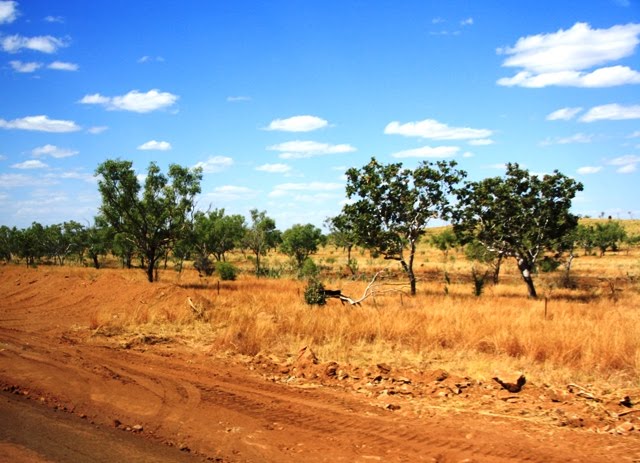 Old Halls Creek is where Western Australia's first gold rush occurred but it was short lived as the isolation and harsh conditions were too much. However pastoralists and mineral prospectors saw potential, but a new town was built closer to the airstrip and the new Highway and the old town was abandoned in 1954. 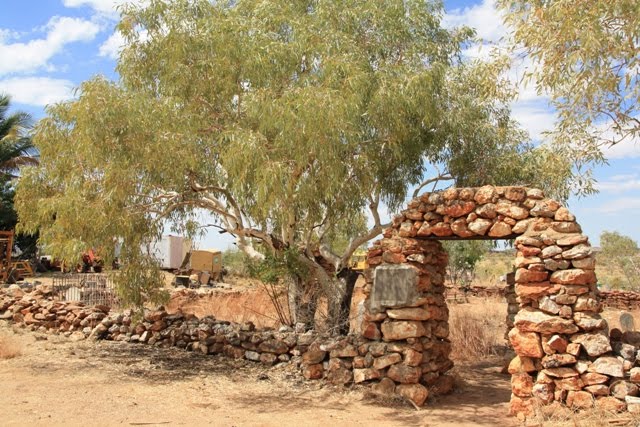 The cemetery contained some interesting headstones, very young people dying from thirst or accidents, as there was no medical care available in the early days. 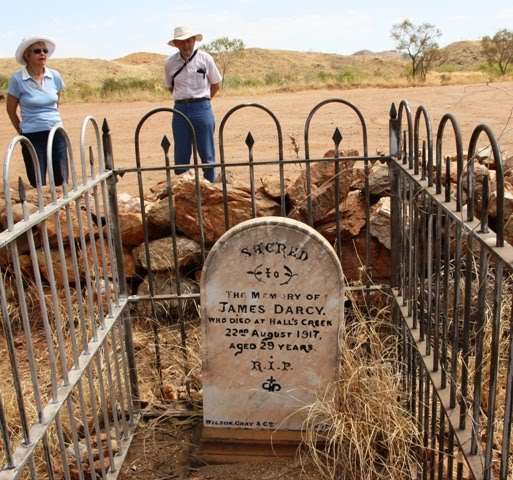 In 1942 Darcy was a stockman at Ruby Plains Station 75 km south of Halls Creek. He was mustering cattle when he fell from his horse and was seriously injured. When his friends found him they took him by buggy to Halls Creek (the journey took 12 hours) but there was neither a doctor nor a hospital in the town. The local postmaster had enough medical knowledge to realise that Darcy needed immediate medical attention. He telegraphed both Wyndham and Derby but the doctors from both towns were on holidays. He then telegraphed Perth and, using only morse code, a Dr J. Holland diagnosed Darcy as having a ruptured bladder. He had to be operated on immediately. Messages flashed back and forth in morse code.
'You must operate.' 'But I have no instruments.' 'You have a penknife and razor.' 'What about drugs?' 'Use permanganate of potash.' 'But I can't do it.' 'You must.' 'I might kill the man.' 'If you don't hurry, the patient will die first.'
Tuckett strapped Darcy to the table and began operating according to instructions he received by telegraph. The operation took seven hours - with no anaesthetic. A day later complications set in. It became obvious that a doctor would have to come to Halls Creek.
Dr Holland took a cattle boat from Perth to Derby and then travelled the last 555 km by T-model Ford, horse and sulky and foot. He finally arrived in Halls Creek only to find that Darcy had died the day before. It was this event which inspired Rev John Flynn to establish the Royal Flying Doctor Service. Darcy had not died in vain. 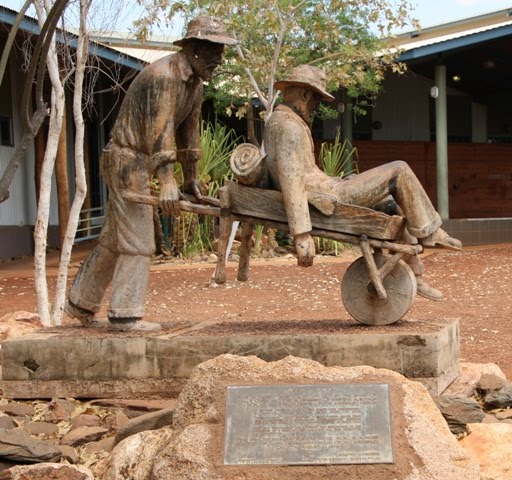 We drove back to (new) Halls Creek and had a picnic lunch in the visitor centre grounds where this statue stood. The harsh conditions made the early settlers tough. This man known as Russian Jack pushed his mate 300 kilometres to get medical attention.

After another 100kms we turned off the main road and headed into the Purnululu National park.The landscape had changed to valleys and hills. 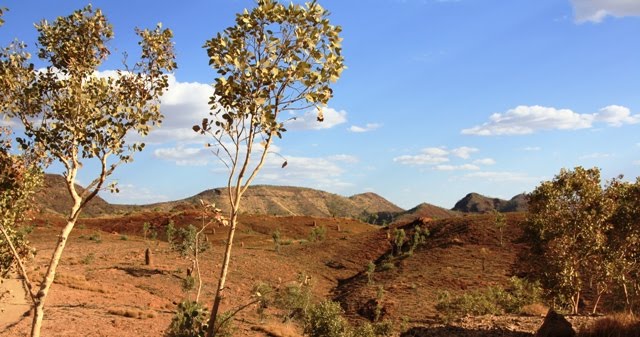 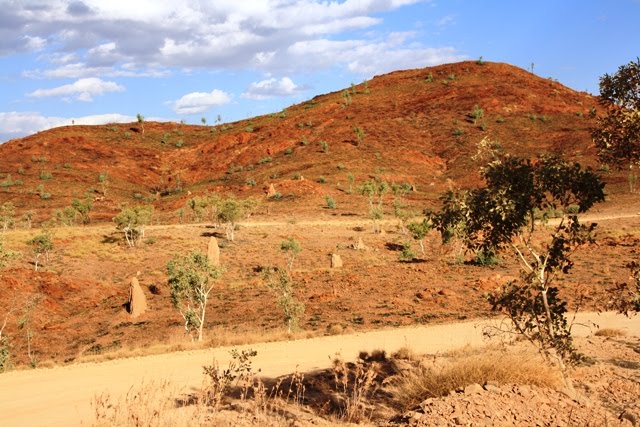 We stopped to stretch our legs and take photos. 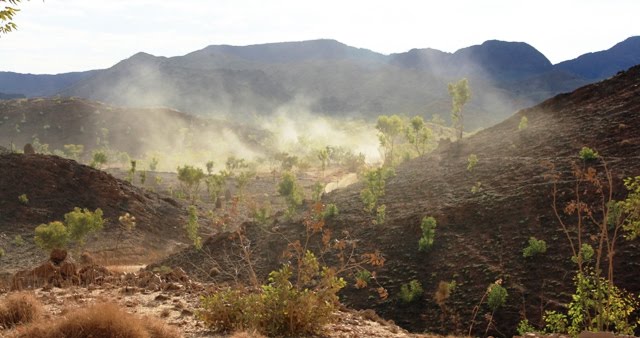 The dust trail of an approaching vehicle. Only 4 wheel drives are allowed on this dirt road. Part of the road went through Mabel Downs cattle station 2.2 million acres. The road is very rough, there were rocks protruding through the surface, there were creeks to ford, sudden rises, forests, thick soft bulldust, and sharp corners to negotiate. Ben did a great job of driving and the bus rocked and rattled its way to the camp site. It took 2 hours to go 50 km. 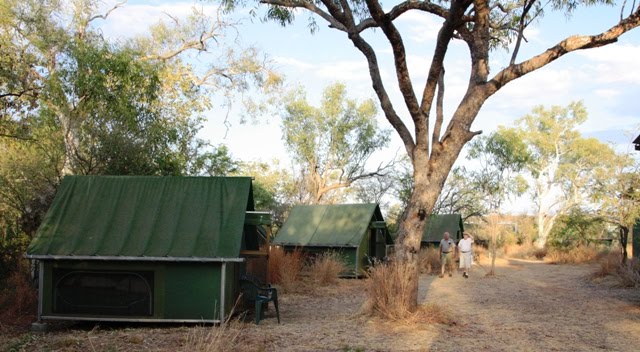 The Bellburn Wilderness Camp. It was exciting to be in the middle of the wilderness miles from anywhere but it was HOT! 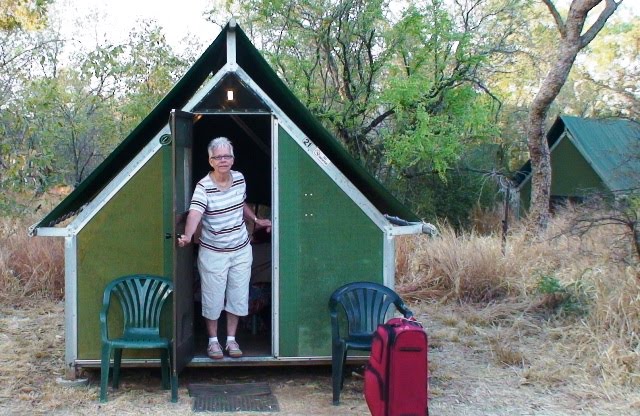 The tents were small but had a wooden floor, 2 comfortable beds, a small table and an electric light. 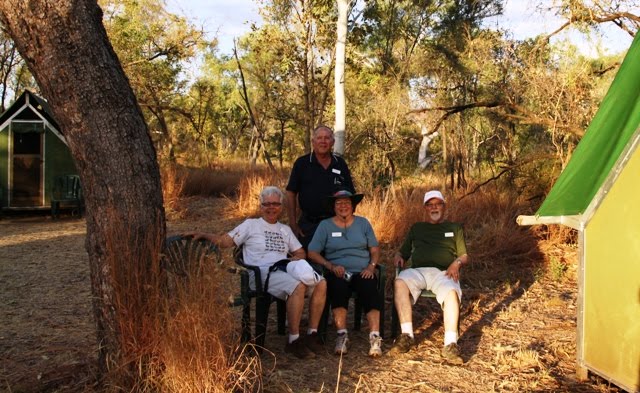 It was so hot inside the tents that we tried to keep cool in the shade of a tree. There were bathrooms opposite the tents, which we shared with our neighbours. At night it got cool and we needed a blanket. 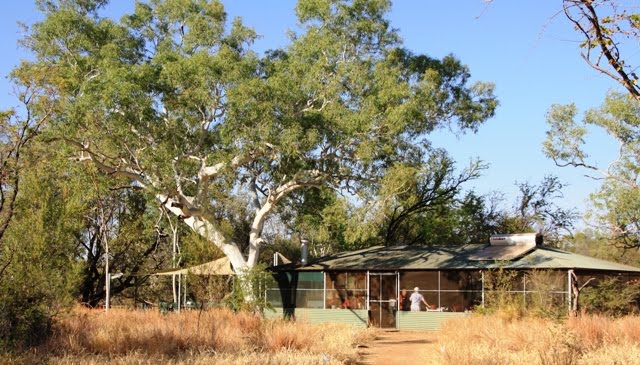 We had our meals in the "Mess". It reminded me of school camps. There was a cool deck at the back, where we ate with the sounds of the birds and wild life. While we were coming to terms with our wild surroundings, Ben was checking the bus for damage and found a bracket holding the air tank had broken. The camp had a shed where Ben and a few helpers welded the bracket together. We went to bed excitedly looking forward to our first helicopter ride tomorrow.