Birthday Bear insisted on a Christmas get together with her wrinkly friends. After all it is Jesus' Birthday that we are celebrating. 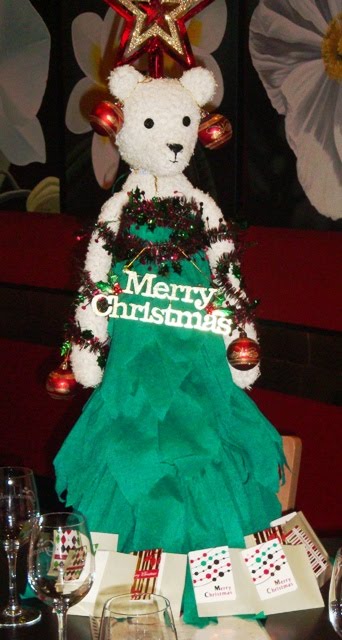 This year she came dressed as a Christmas Tree with bauble earrings and a star on top. 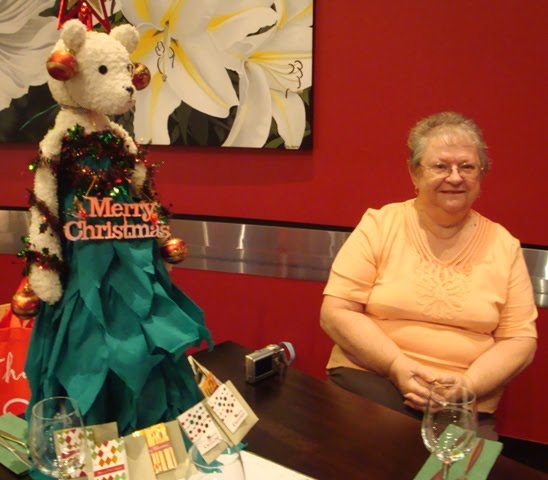 Ann is the one who helped Birthday Bear get dressed for the party. 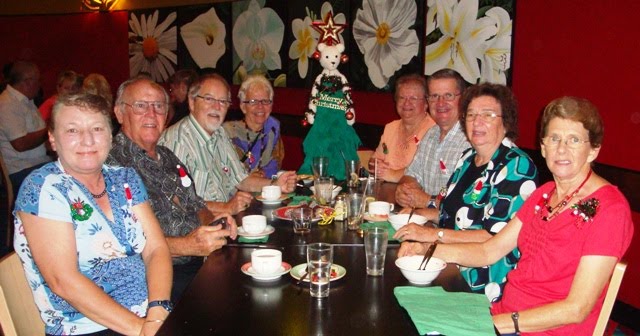 We had a buffet dinner at the Greenbank RSL Club. From the left Kathy, Paul, Bill, moi, Birthday Bear, Ann, George, Helen, and Mary. 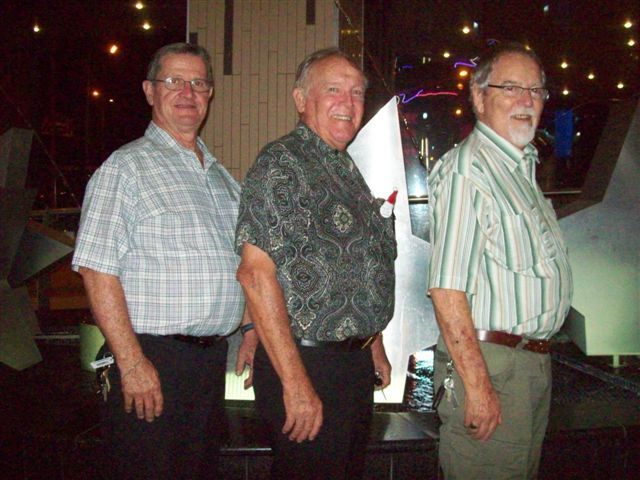 Ann took this shot and named it, "The Three Wide Men". (I have added it later as she was disappointed it didn't make the blog. See her comment below.I hope it doesn't offend them)

Ann also made up a poem about Birthday Bear and included all the characters that Bear has portrayed:

I am the no-sexual Birthday Bear;
And my personalities I would like to share;
I have been a fisherman – twice in fact;
And once I wore a fisherman’s hat;
I have also traveled by coach outback;
Was a film producer not long after that;
Became an author of no-renown;
As a grey nomad hit the road to travel ‘round’;
On a boat trip I was a teacher;
As a dancing diva a glamorous boa did feature;


A blogging bear created some talk;
Another time I was decked out for a walk;
Once I was depicted sipping wine;
Whilst enjoying a boat cruise down the Rhine,
A Scotsman who in his cupboard, had a skeleton or two;
A theatre audience member – I’ve been that too;
Why, even as Christmas came my way;
With sled and Rudolph, Santa Clause I did play;
I have been a cowboy riding a “cobweb broom horse”;
Cruised on the Brisbane River as the other fisherman, of course;


Flew to Townsville in the tropical north;
Taking my bikini, sunshade and money purse;
A volunteer in a library – I was that also;
Even a gardener watching the lemons grow;
An elegant chorister in a CWA choir;
A lawn bowler decked out in white bowls attire;
My breath was taken away and almost my speech;
As a whale watcher – witnessing their amazing breech;
My varied personas have been filled with glee;
But what’s this – now I’m a green CHRISTMAS TREE!