WHEN I WAS A CEO

In 1962 My brother and I were both studying at ASOPA (Australian School of Pacific Administration) in Mosman , Sydney. He was doing the Patrol Officer's "long course" and I was doing a Cadet Education Officer's course.(Which meant a teacher training course for the Australian Territory of Papua New Guinea and the Northern Territory.)  It is funny now to think I used to be a CEO, it sort of means something different now. During that first year I shared an apartment with my brother (David) and sister in law (Ann) because my home was too far away on the southern side of Sydney to travel every day. In October Ann gave birth to Michael. 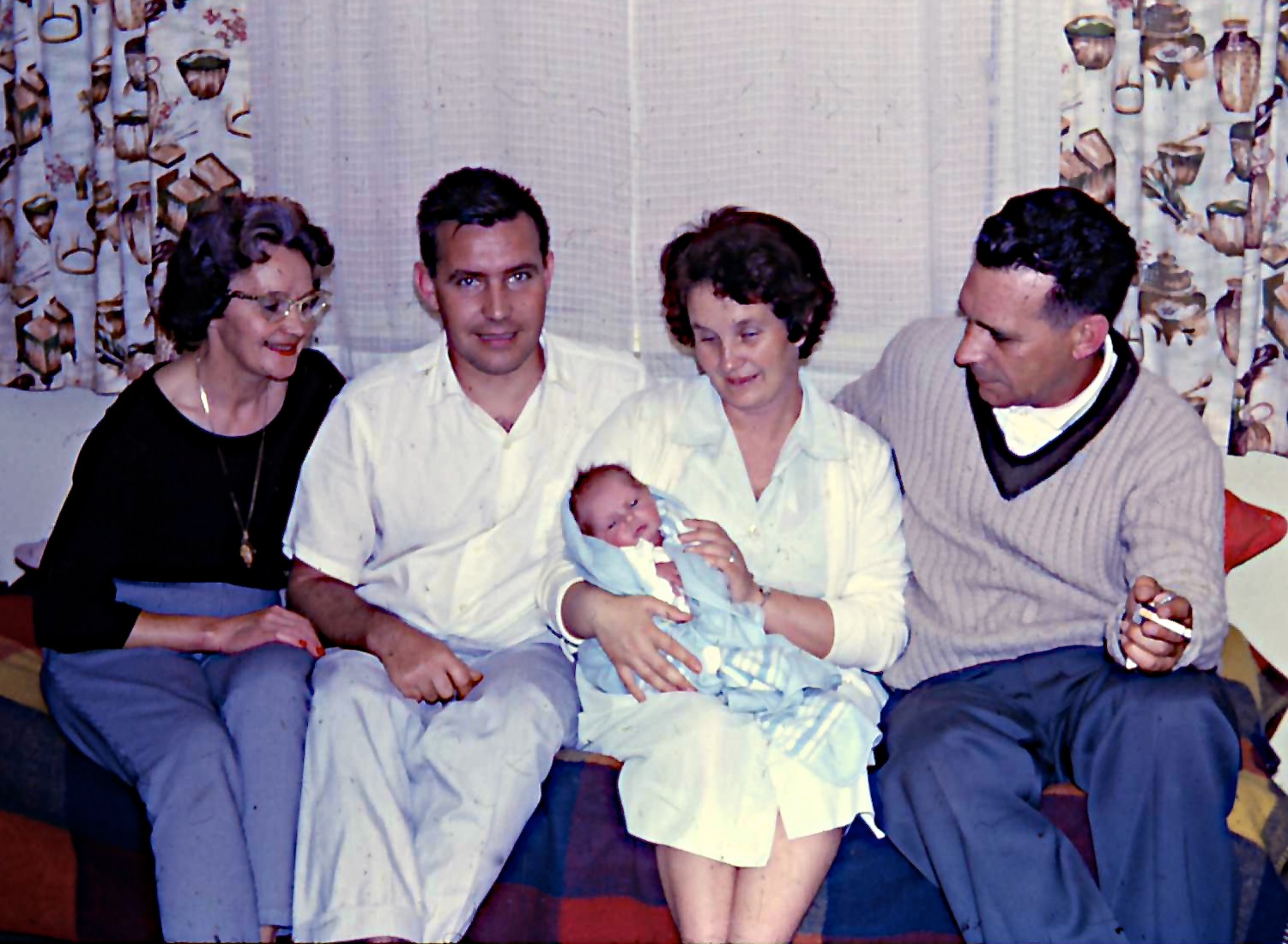 My parents and brother have passed away. Ann still lives in their family home in London but spends many months in St Lucia in the Caribbean where Michael lives.
At this time I was studying for end of year exams but managed to squeeze in loads of fun with other students. We participated in parties, sports events, puting on a review and all the other high jinx that students get up to. At the end of the year most students went to their far flung homes but I went to Queensland's famous Gold Coast for another holiday like I did the summer before. 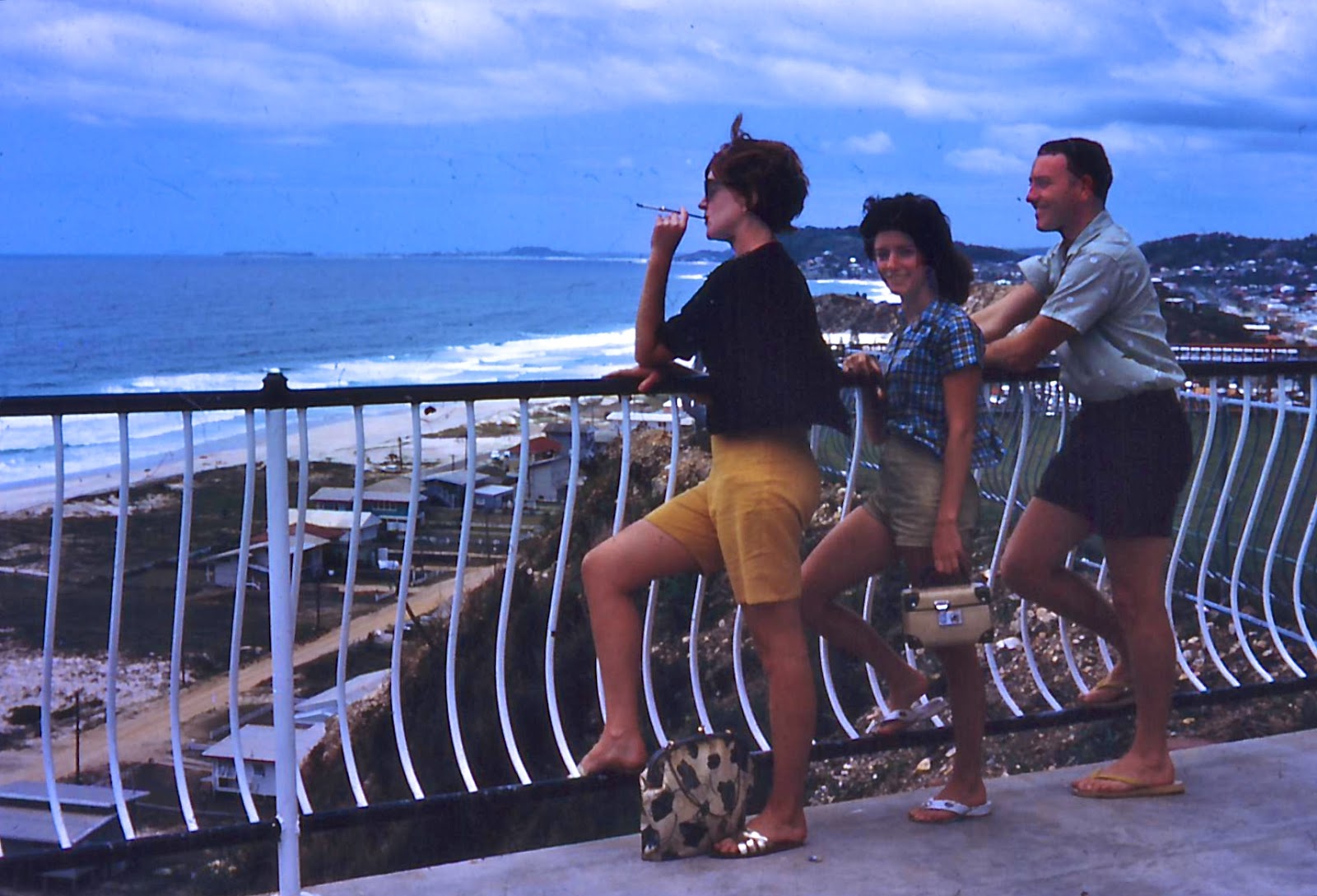 Helen, Pam and Ron at a lookout on the Gold Coast in Dec1962

This time I went with Helen and Pam. Us three girls were offered a lift from another student, Ron, whose home was in Queensland. He had a VW Beetle. We all squashed in with our luggage and we drove all the way from Sydney to the Gold Coast on one day. It seemed to take forever but we had lots of laughs on the way. 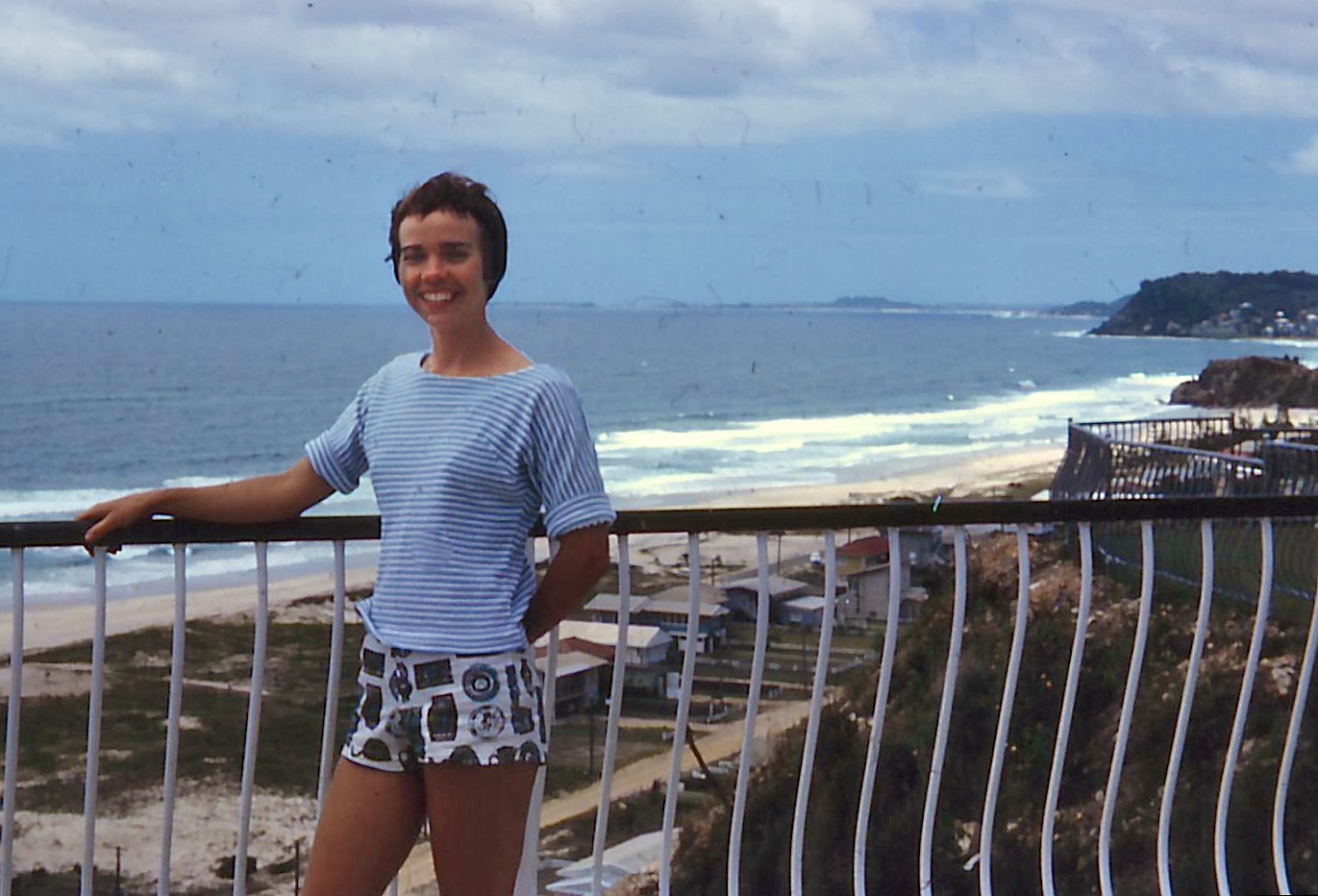 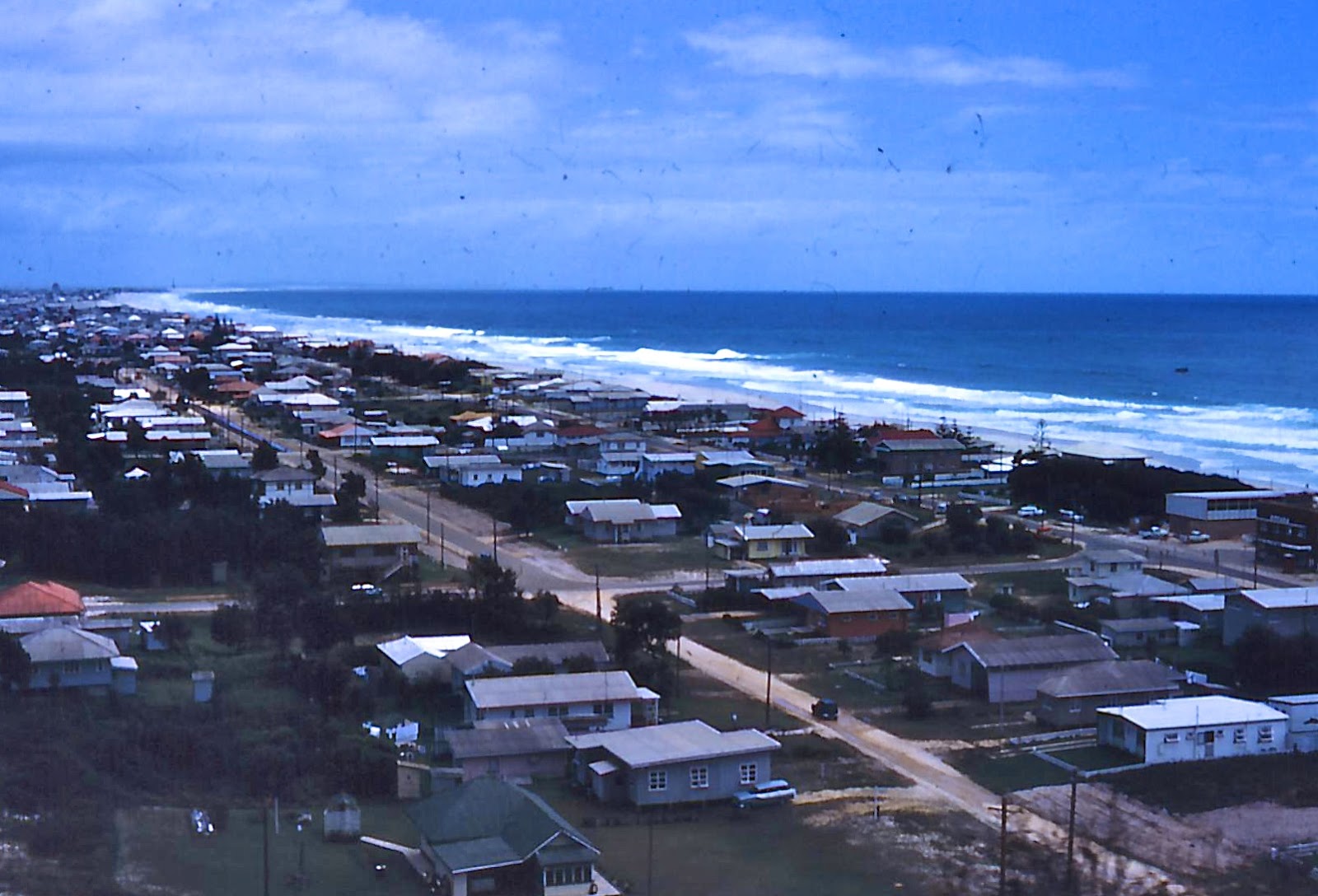 The view from the lookout of the Gold Coast in 62. 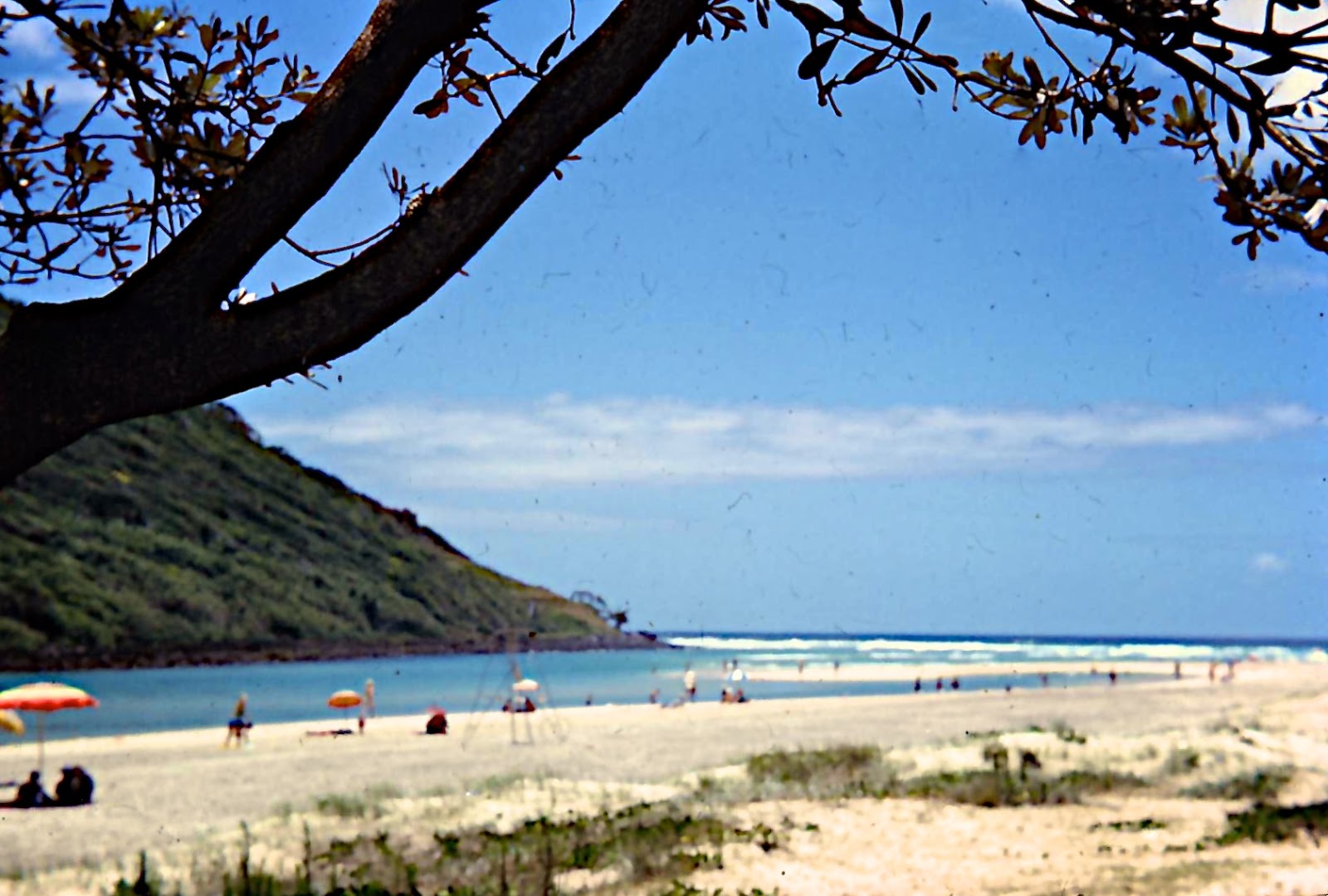 Ron went to his parents place and we had booked a hotel. We spent days sunbaking, swimming, surfing and exploring other beaches. 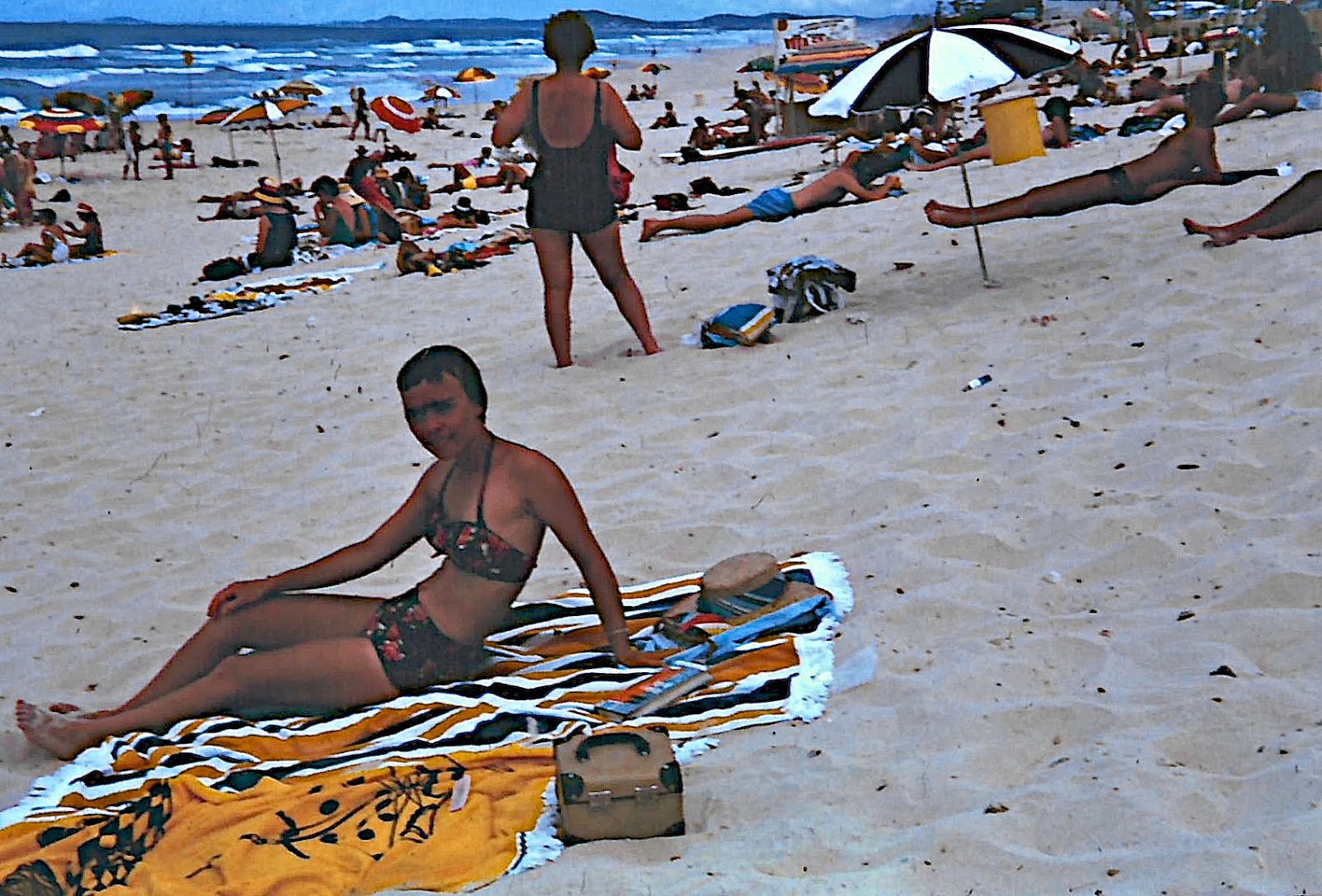 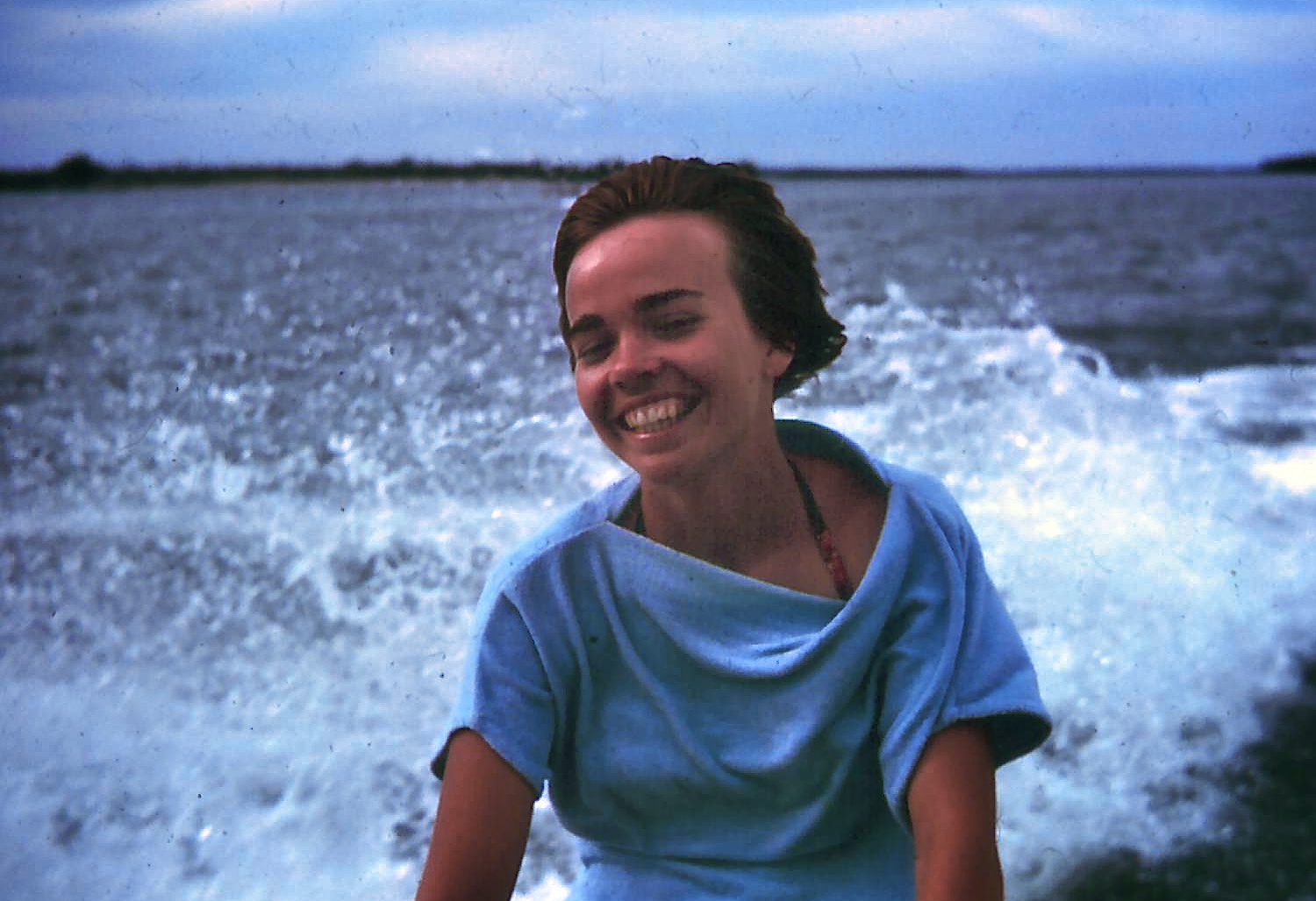 One day we went on a tour offered by the hotel, it was to Stradbroke Island. We went by launch but when we got there we had fun in a speed boat. 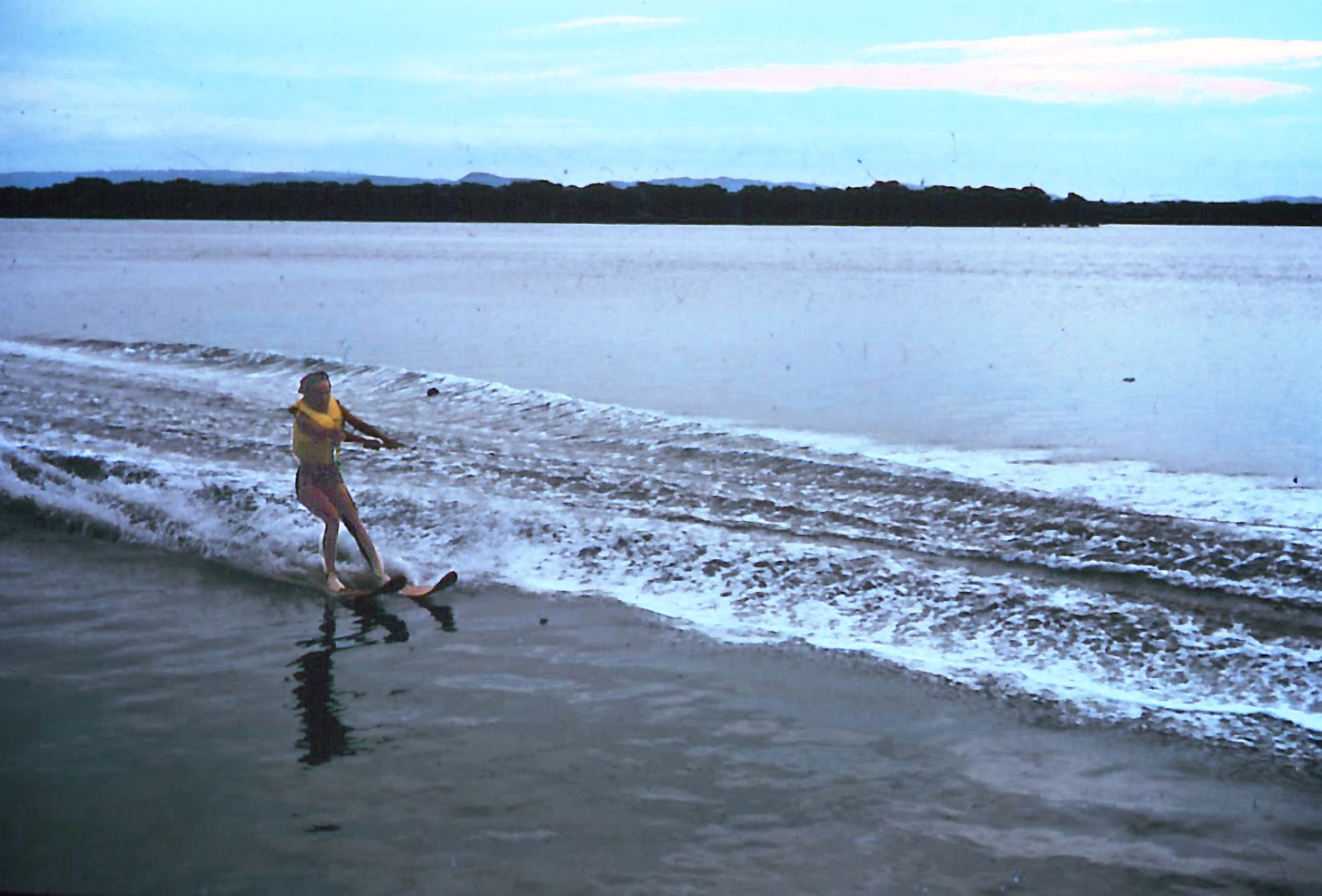 We also had water ski lessons. 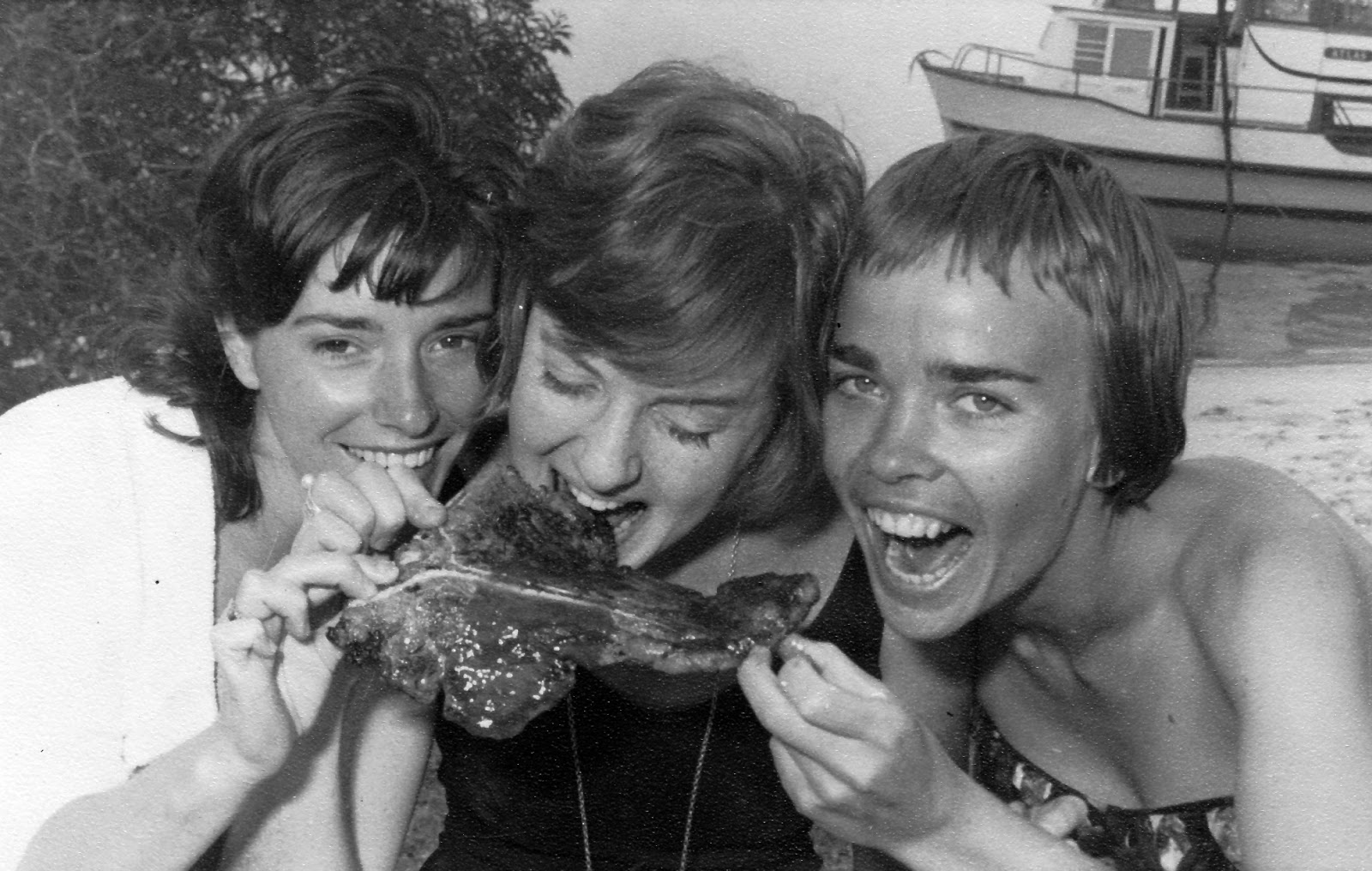 And the hotel staff made us a barbecue lunch. We couldn't believe the size of the steaks. 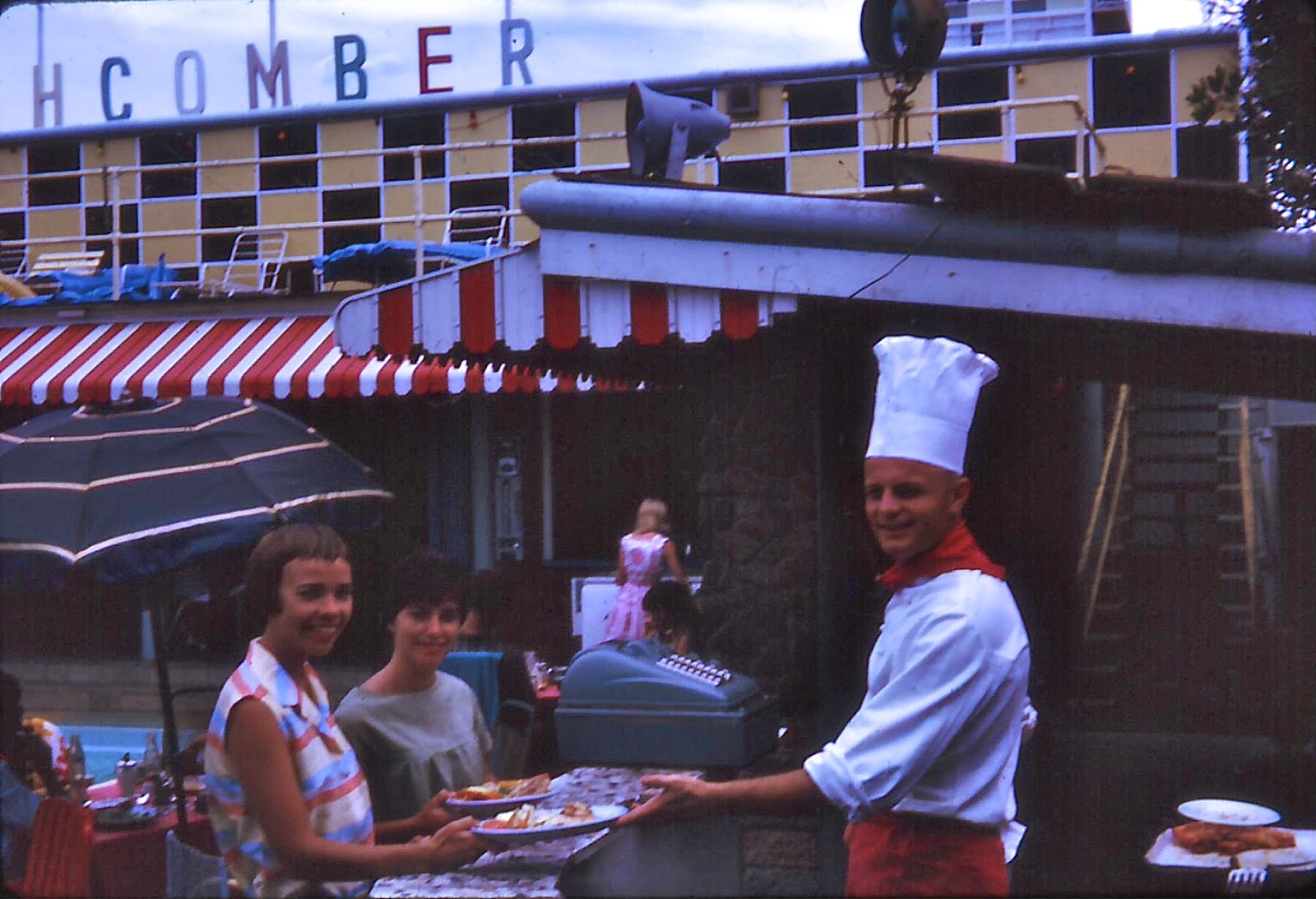 Some days we had lunch by the pool at the hotel. It was so warm and casual there but at night we used to get dressed up for dinner, a concert and dancing. One evening a young boy band entertained us. There were eight year old twins, Robin and Maurice and their older brother, Barry. They were very good, any wonder as they grew up to become the famous Bee Gees. 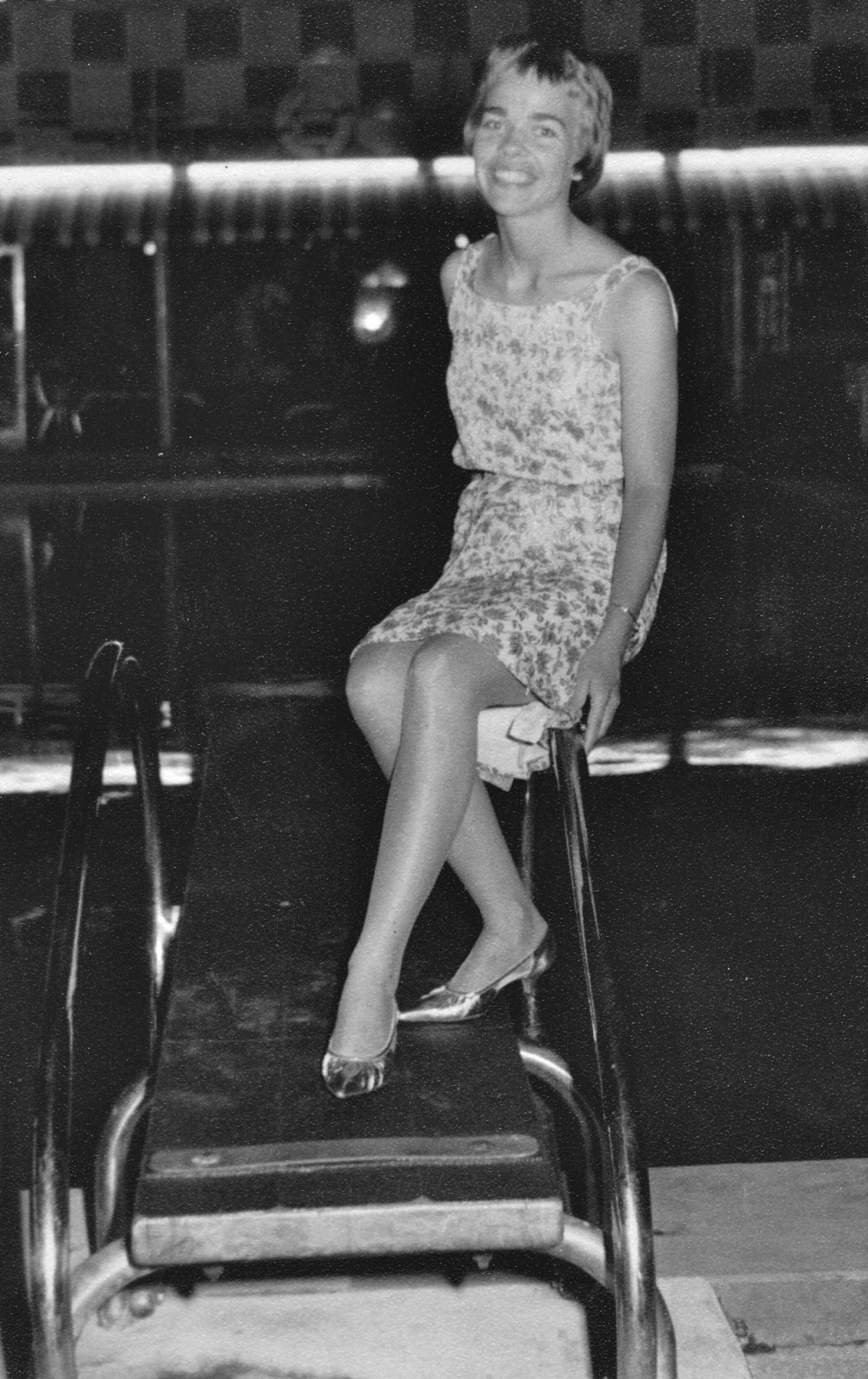 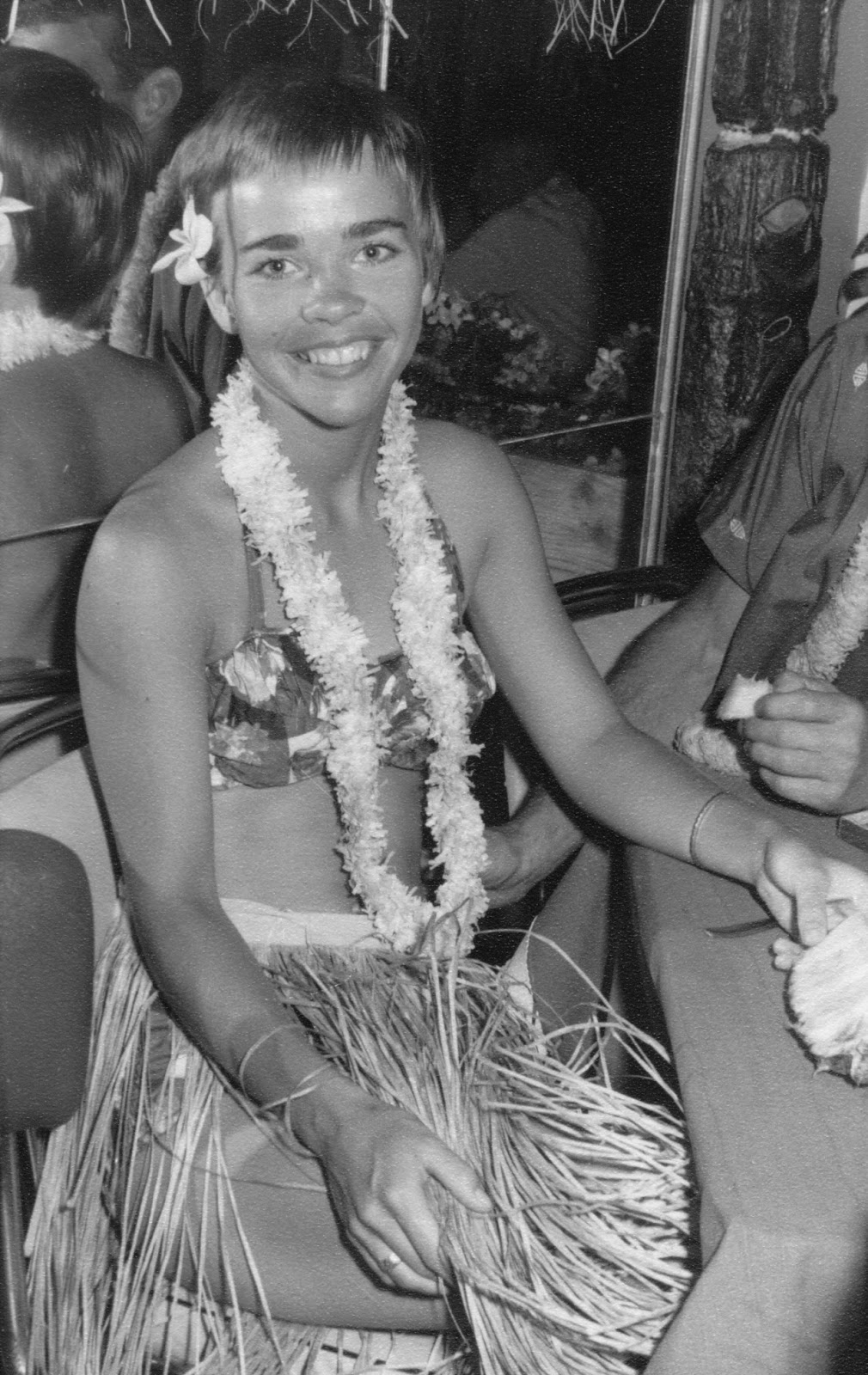 Some nights were theme nights, hence the Hawaiian outfit.

All too soon it was time to squash into Ron's beetle and drive back to Sydney where I spent time with my parents before returning to college. But first I had to find a new place to live closer to ASOPA because David and Ann were returning to TPNG (Territory of Papua and New Guinea.)
Posted by diane b