In 1963 we had been in Lae, PNG for only a few days doing practice teaching when our lecturers took us for a picnic. One I'll never forget. We were told that we were going to Butaweng swimming holes and waterfalls near Finchhafen, a small settlement on the north coast only a 30 minute flight from Lae. "FLIGHT! We are going to fly to a picnic?" I couldn't believe it but I was soon to learn that the main form of transport in TPNG was by small planes. The lecturers had chartered a plane to take us for a picnic and to experience a beautiful part of PNG.

We were taken to Lae airport and there was a small DC3 sitting on the strip with the doors wide open. We had to wait for the paper work to be sorted and the picnic food and drinks to be loaded then we climbed aboard. WOW! The heat inside that tin cylinder was unbearable no wonder the door was open. The plane had been sitting in the sun for a while. The next surprise was the seating arrangement. There were no seats in rows with an aisle but there was a bank of metal, garden type chairs along the walls of the fuselage. There were seat belts attached to the walls.

To keep the drinks cool in this searing heat, there was a 44 gallon drum cut in half longways full of ice.  It sat on the floor behind the cockpit. While everyone got buckled up and the pilot waited for clearance the heat was melting the ice and cooking us. A crew member kept the door open for a little relief. Even when the plane started taxying the door stayed open until just before the wheels left the ground. As the plane steeply climbed into the blue sky the melted ice water slopped over the edge of the drum and came washing down the centre of the plane cooling off our feet and shoes. This was going to be a fun day and an experience to remember. 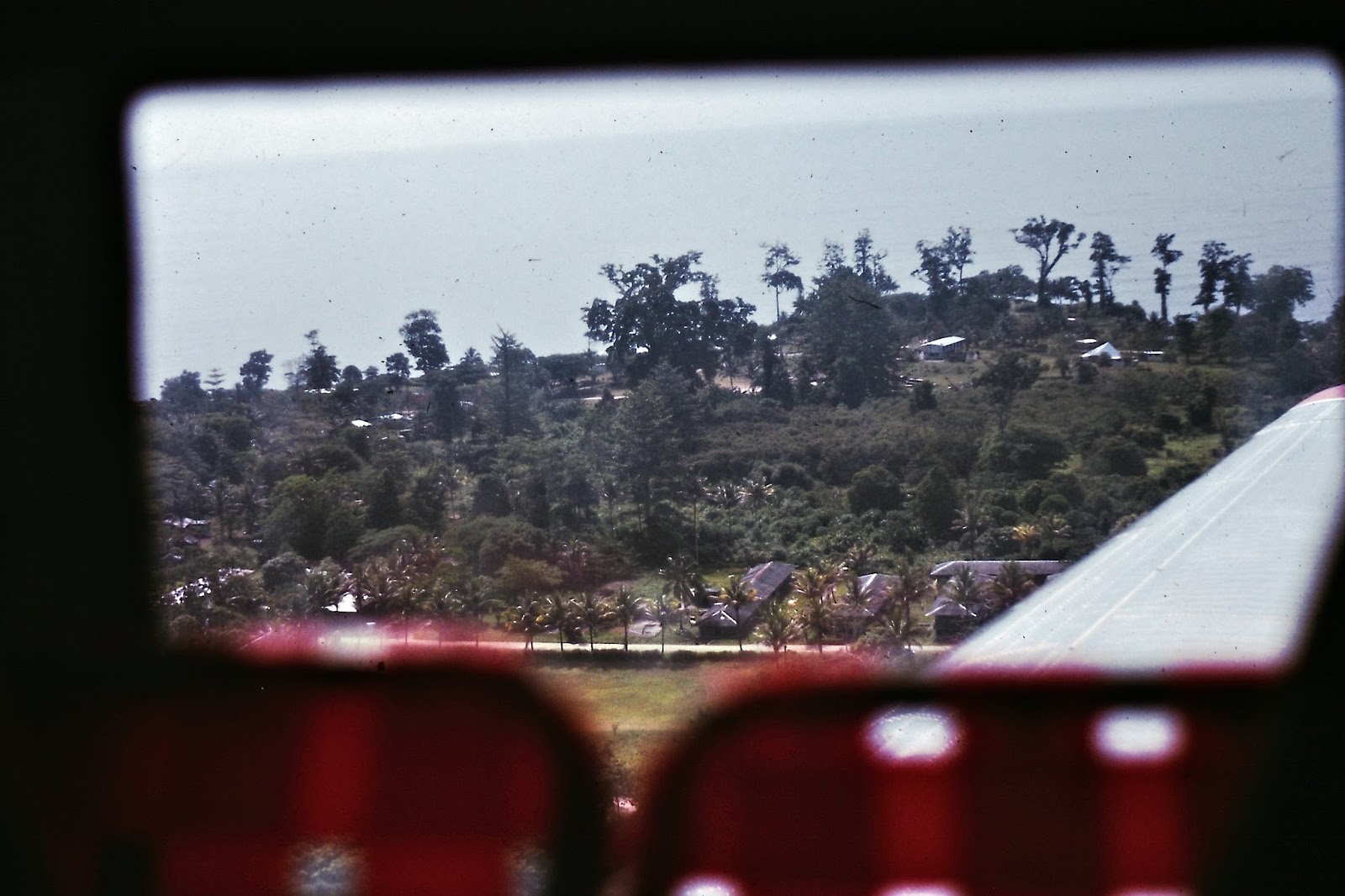 We flew over swamps and virgin jungle but after only 30 minutes we started our descent into Finchhafen.

It had been cooler up in the air but as soon as we climbed out of the plane on a little ladder, it was very hot in the sun. So we all crowded under the wing for some respite in the shade while we waited for a "taxi" to take us to Butaweng. There was no such thing as a terminal building. 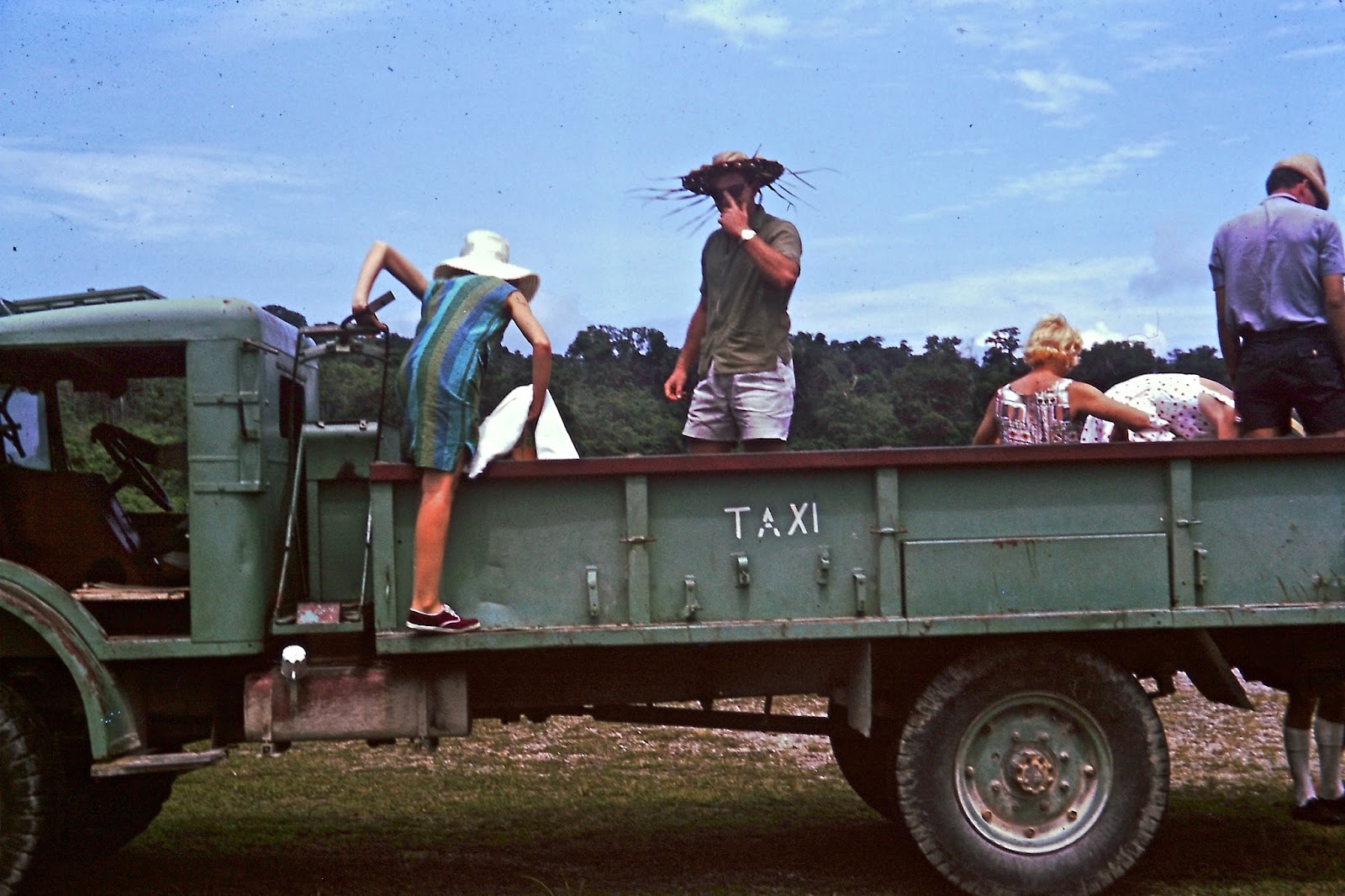 Finally the 'taxi" turned up. The picnic gear was loaded into the truck and then we had to climb in the back. No little ladder this time. You may wonder why we wore dresses. It was a rule that women should not wear shorts or slacks to show off our curves and skin. 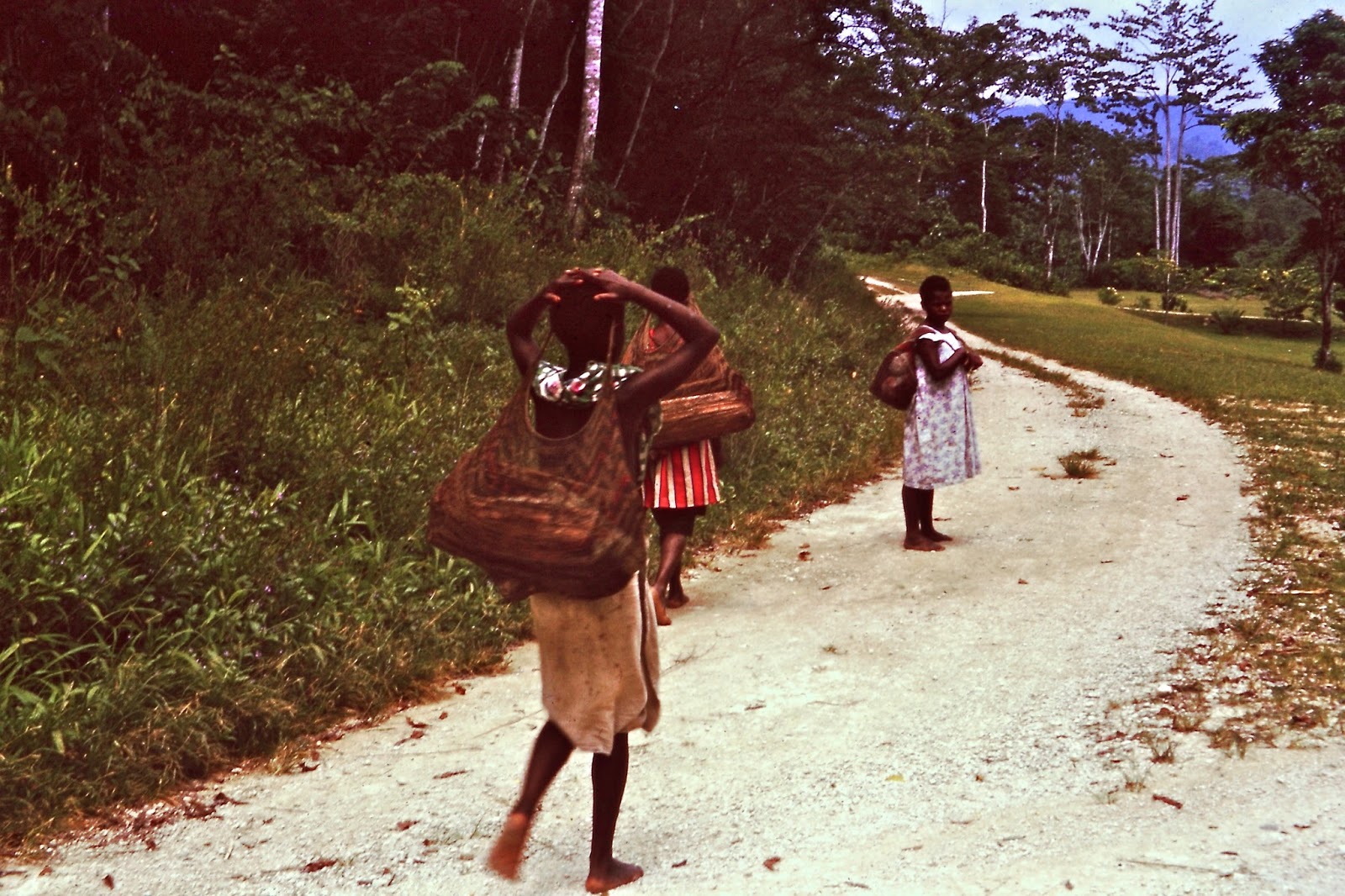 It was a half hour drive on dirt roads to the water holes and I was interested in the tropical trees and the people. It was an uninterrupted view from the back of the truck taxi. I was fascinating to see the native women (called meris) carrying huge loads in a large bag (called a billum) which was hand woven from twine made from plants. The billum's handles were put onto their forehead and then they were hands free. They also carried their babies like this. 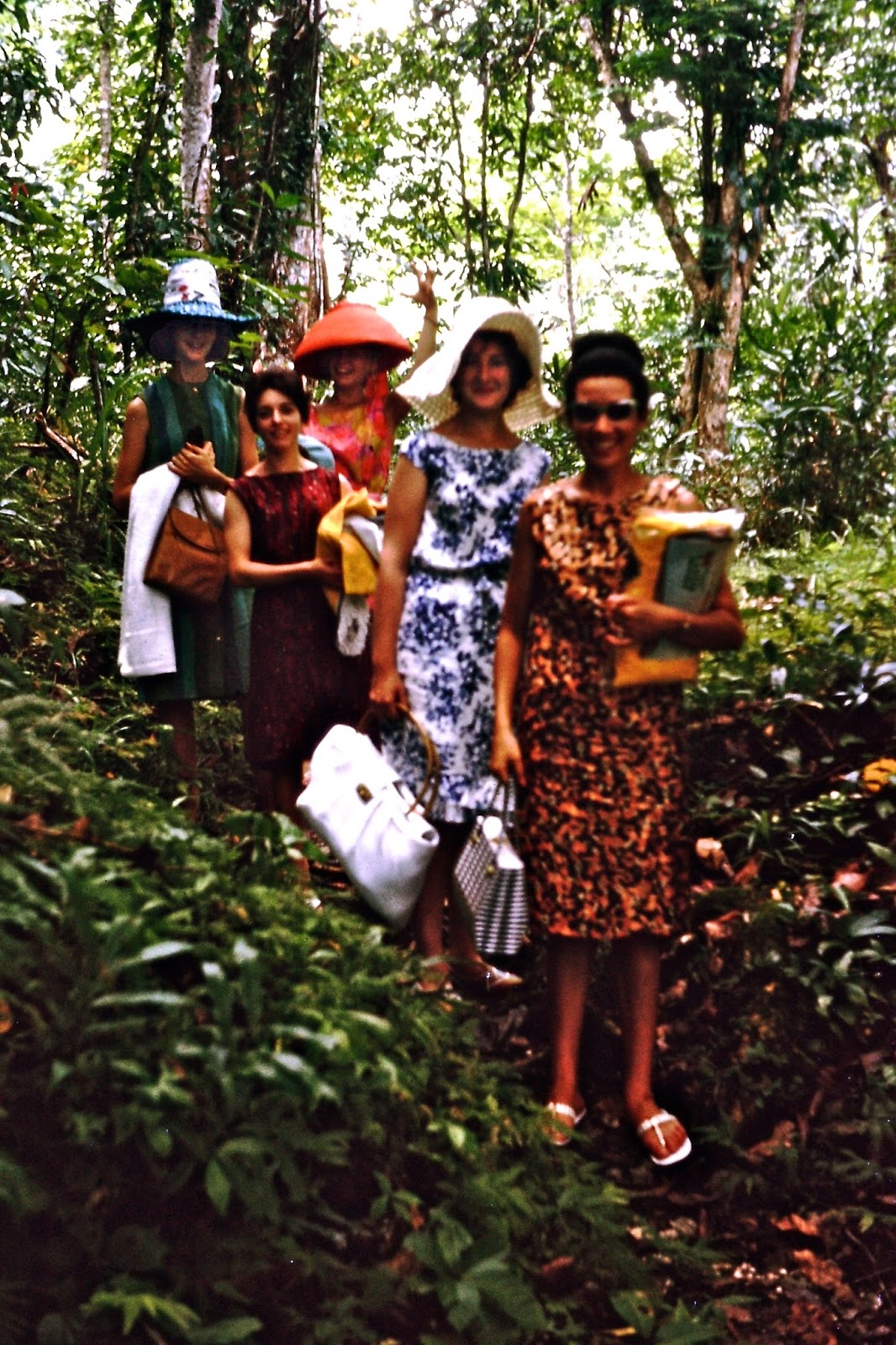 We arrived at the picnic spot and then walked through the jungle to the swimming holes. It was a little cooler in the forest.

The jungle opened up to reveal the most beautful little creek and waterholes. 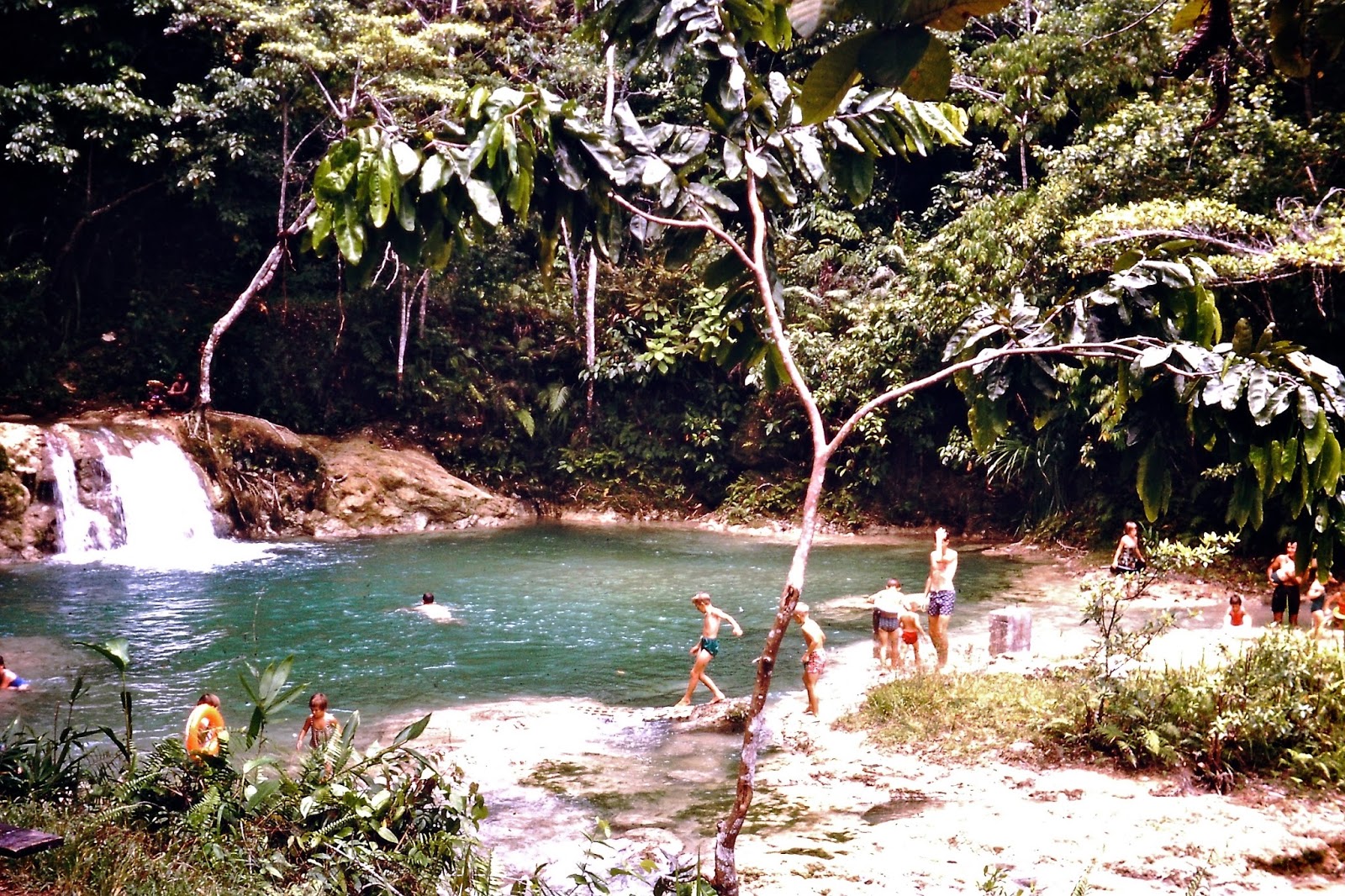 Other expatriates were already there having fun. 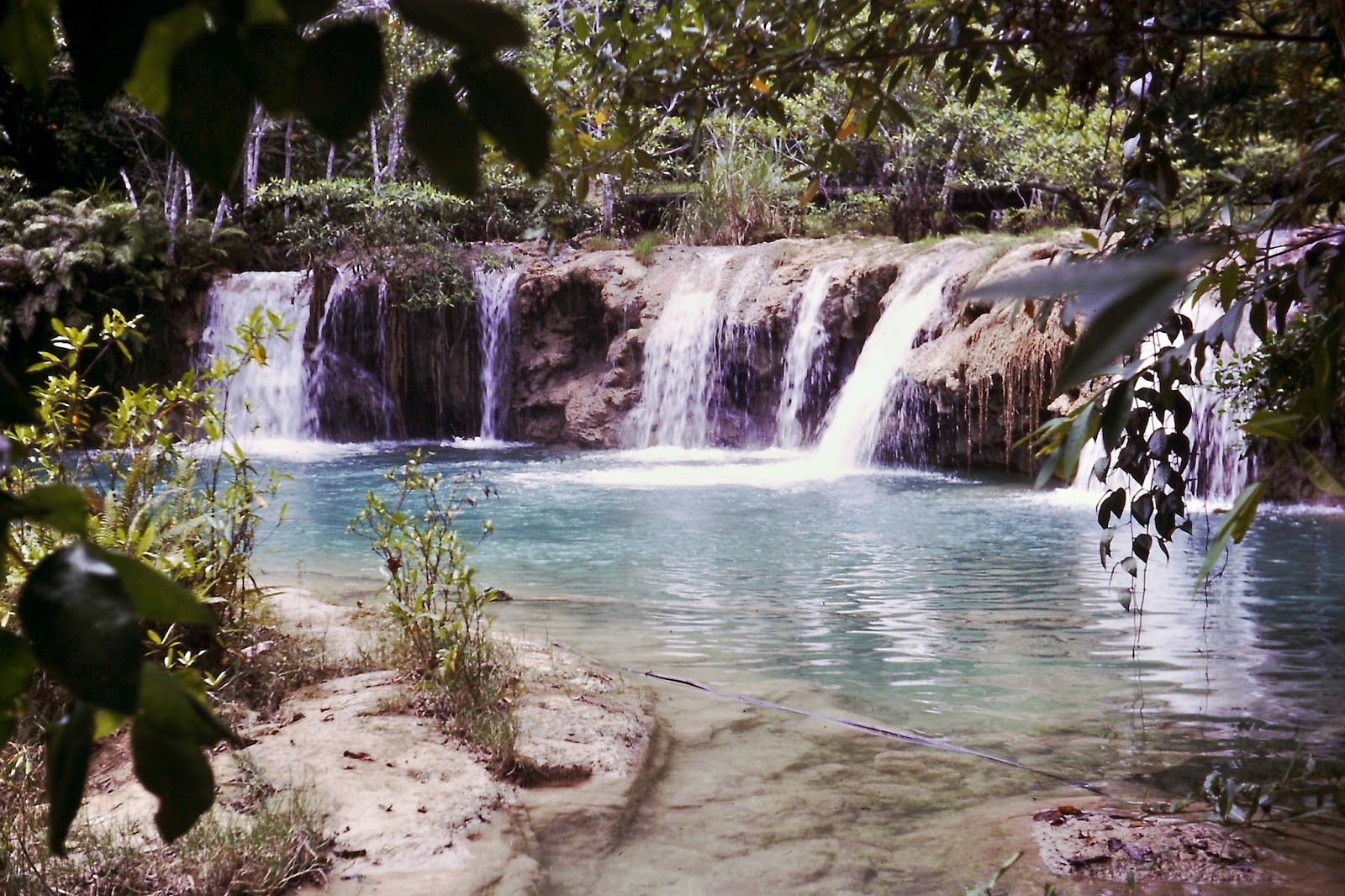 The water looked so blue and inviting. New Guinea is awash with crocodiles but we were assured that there were none in this creek. 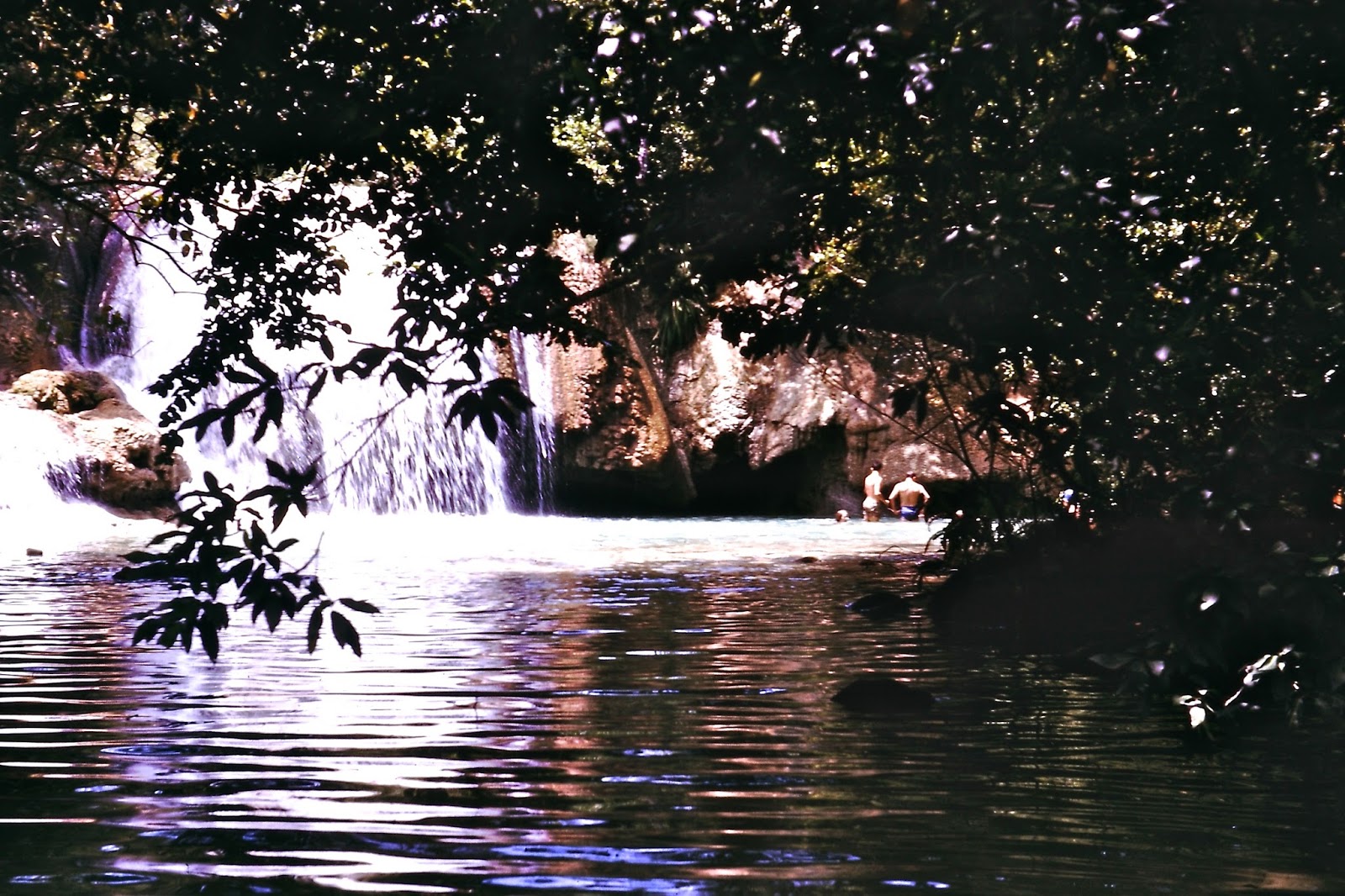 Further upstream we found a pool just for us. It was idilic. I had only seen this type of exotic tropical  scenery on movies or in books. To be actually here being part of it was exhilarating. 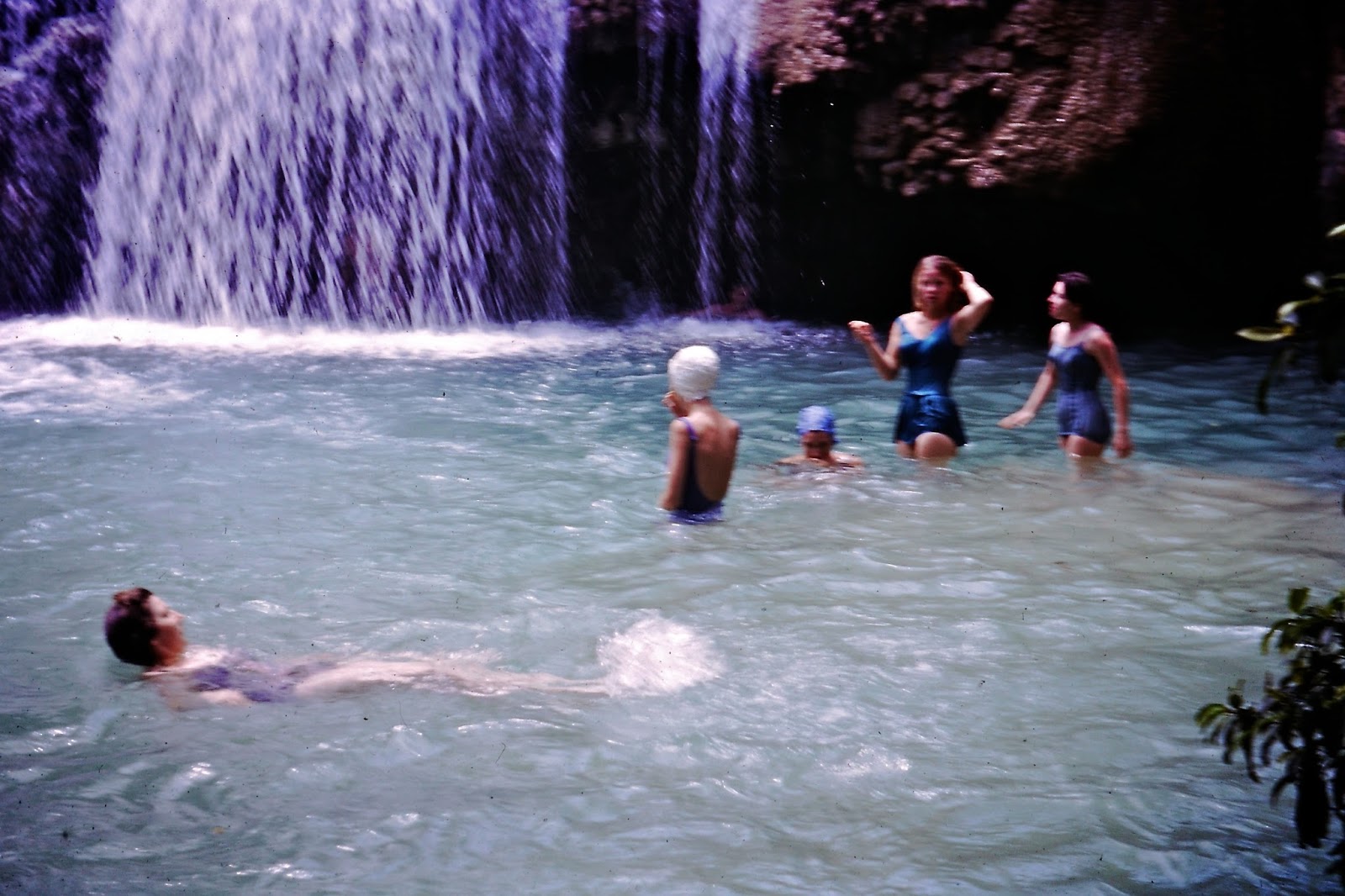 In this private place we stripped off and jumped into the water to cool off.  "Brrrrrrr" it was freezing cold water that had tumbled down from the high mountains in the hinterland . It sure did cool us down. It was from one extreme temperature to the other. 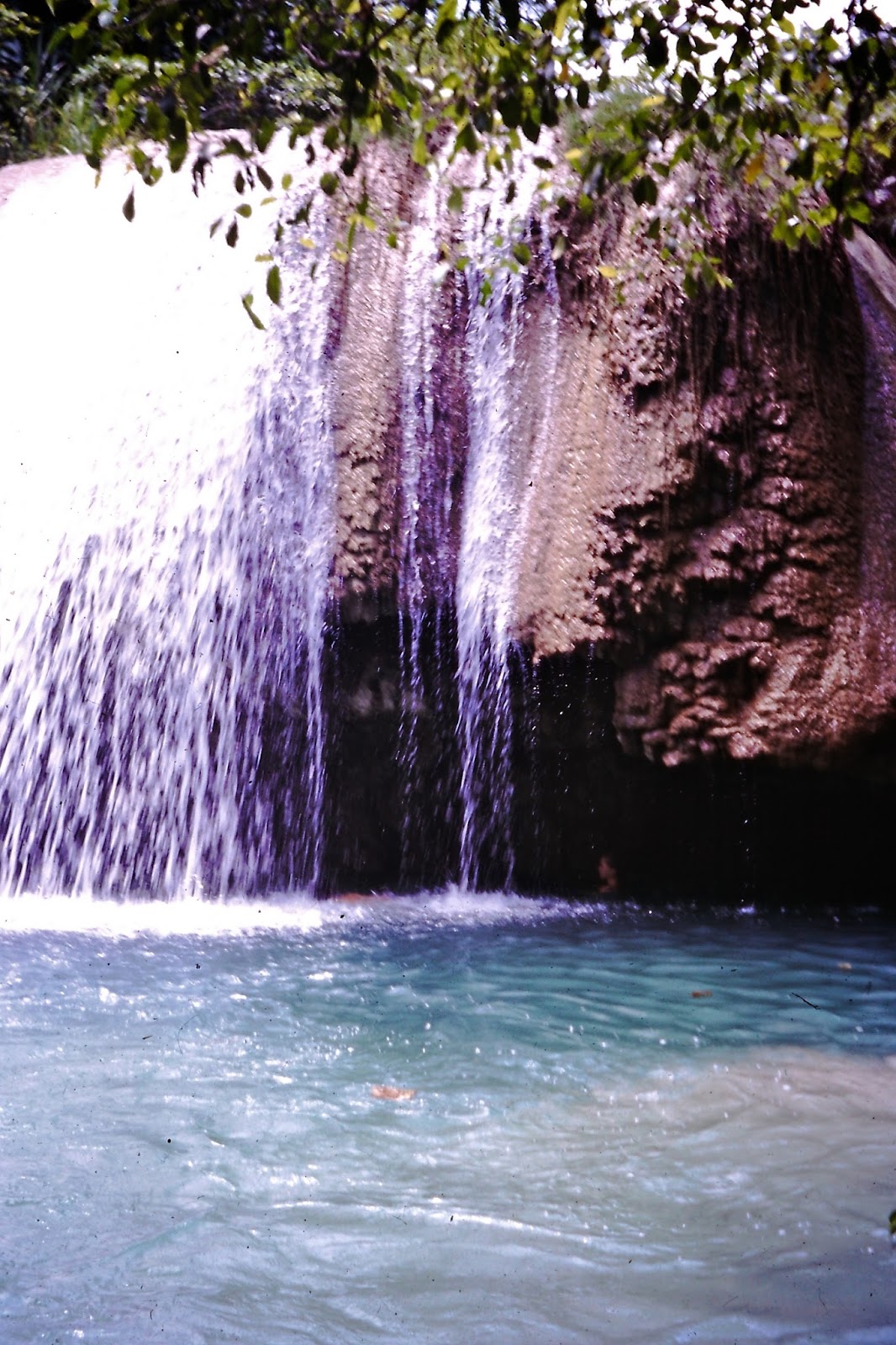 Before leaving the pools some of us climbed to the top of the waterfall it was  a pretty scene from up there but I didn't taken my camera.

Then we walked back to the picnic spot where the boys had cooked a barbecue for us with salads and rolls and drinks, which had all come on the plane with us.

After lunch and a little more exploring of this fabulous place we gathered our belongings and our memories and heaved ourselves up into our splendid taxi and returned to the airstrip. There we once again climbed into the overheated plane cabin, found a chair and buckled up ready for the flight back to Lae. 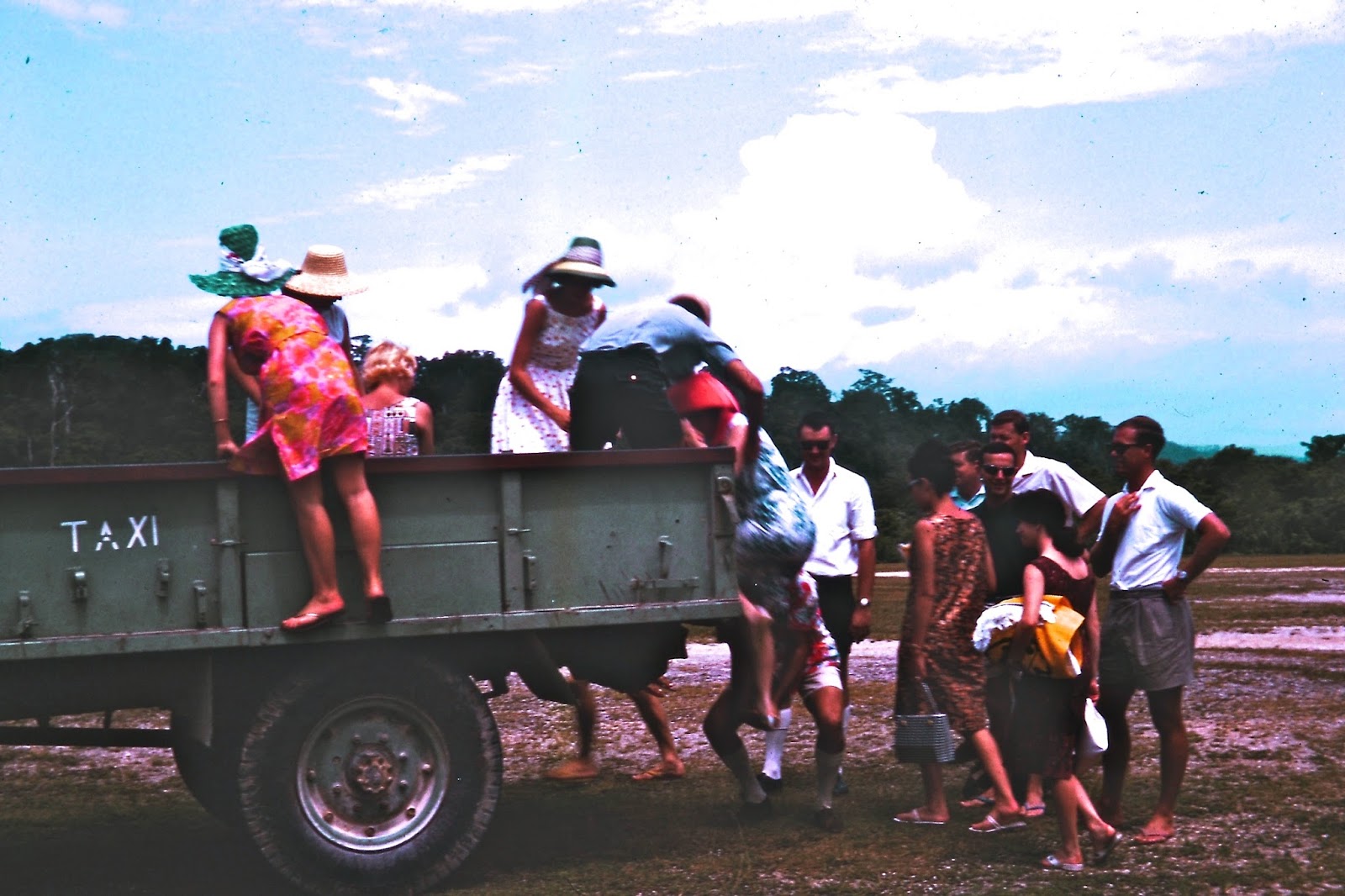 Almost every afternoon in New Guinea, heavy storm clouds come rolling over the mountains and drop torrential rain together with flashing lightening and rumbling thunder. It is not good flying weather. Luckily we were fairly early and hoped to miss the storm.The DC3's fly quite low and it was a bumpy ride back to Lae but we did arrive before the storm.
Posted by diane b

Email ThisBlogThis!Share to TwitterShare to FacebookShare to Pinterest
Labels: My Story, Picnic at Butaweng near Finchhaffen., TPNG