In Nov 1963, I spent two weeks in Lae, P/NG doing the last session of practice teaching for my teaching course. I was with a small group of girls. Some boys went to Rabaul and others went to Pt Moresby to finish their prac teaching. After this we would all be sent out to our teaching posts to start real work. We would have to say goodbye to the friends we had made at college (Australian School Of Pacific Administration). 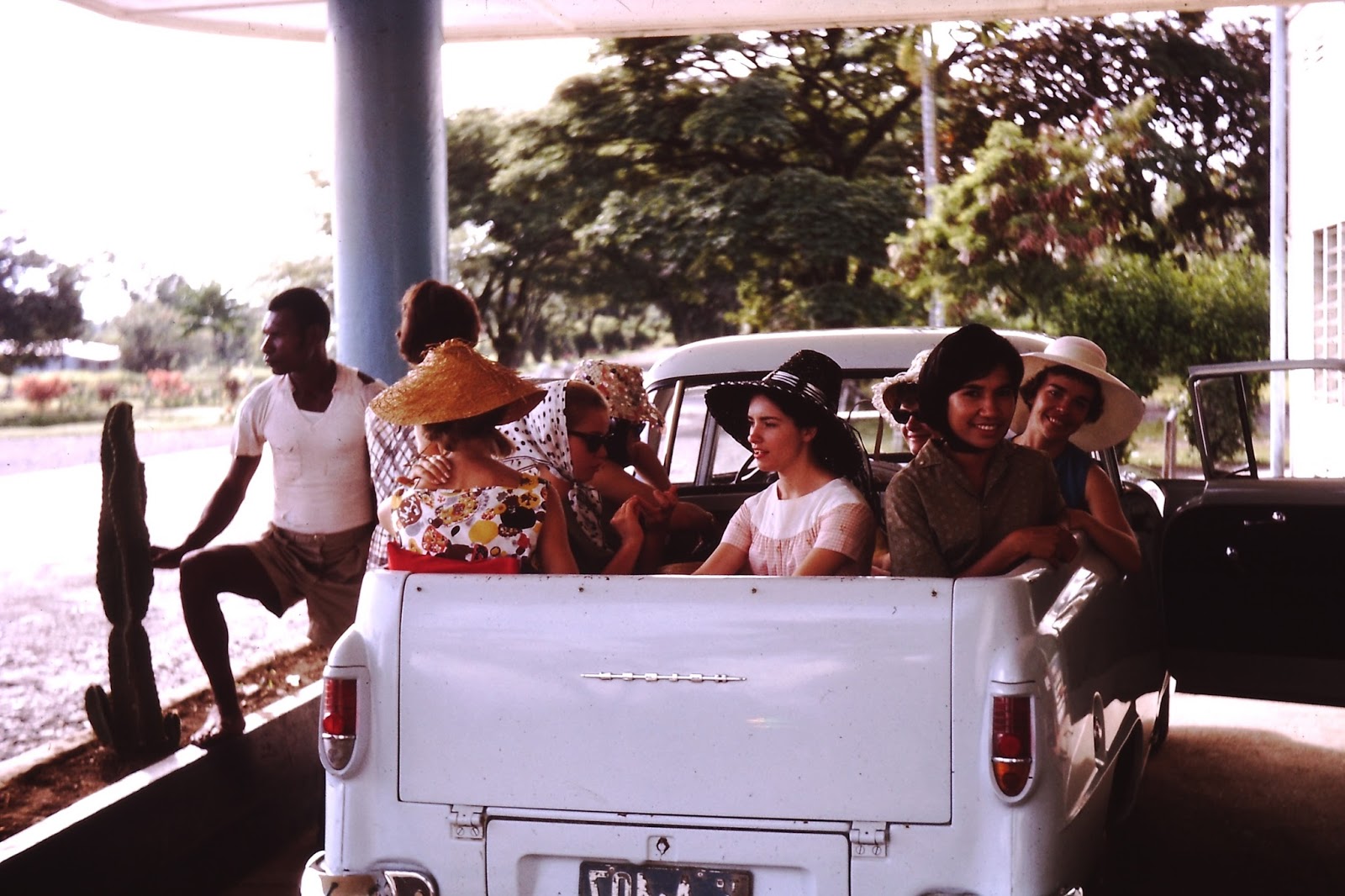 Besides prac teaching we did a lot of observing of how schools operated there. We were all accommodated at the Hotel Cecil and we were transported to schools in a variety of vehicles. 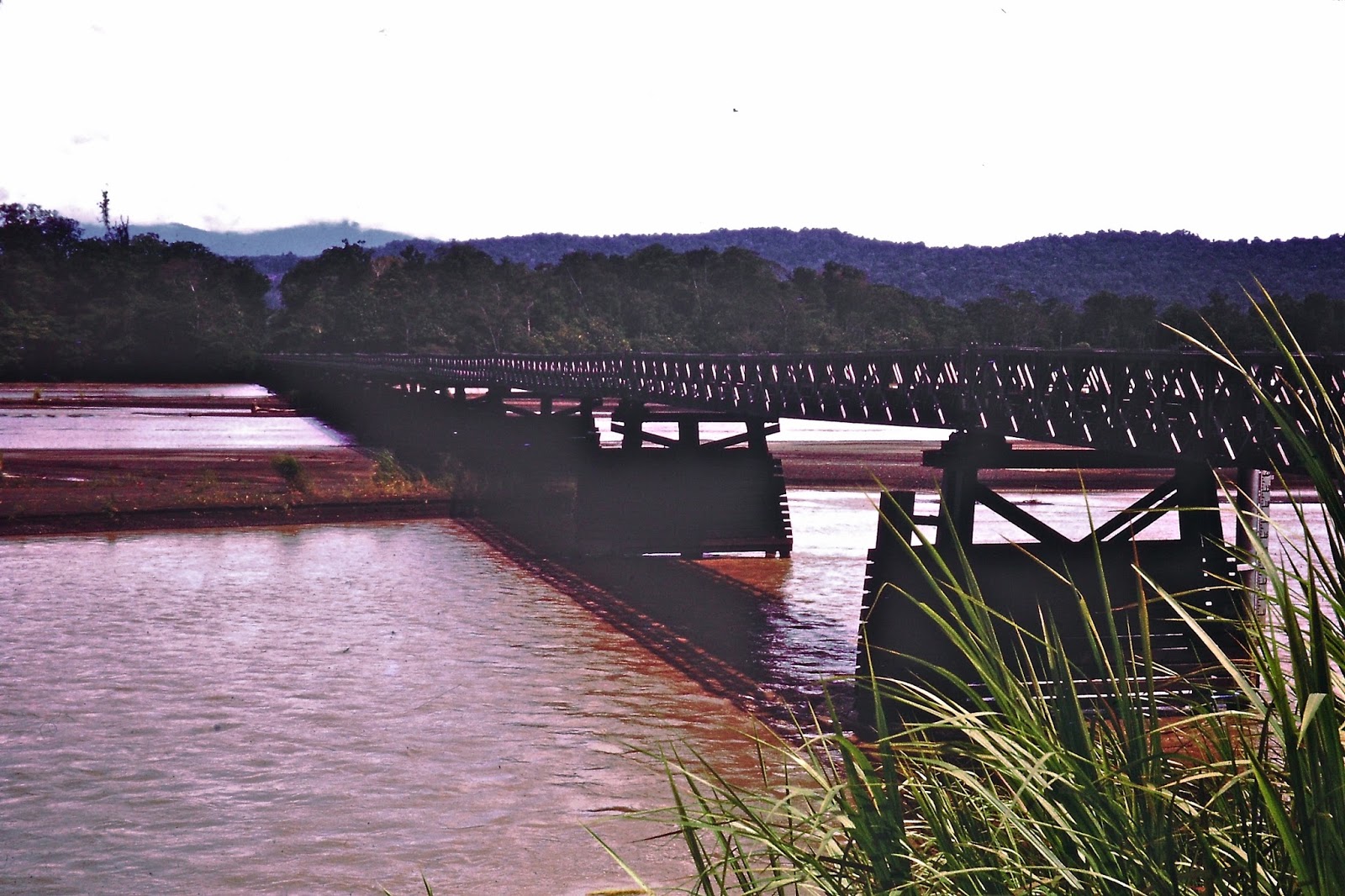 We drove out of Lae into the countryside and crossed over the wide Markham River. The water was low this day but it becomes a surging torrent when it rains. 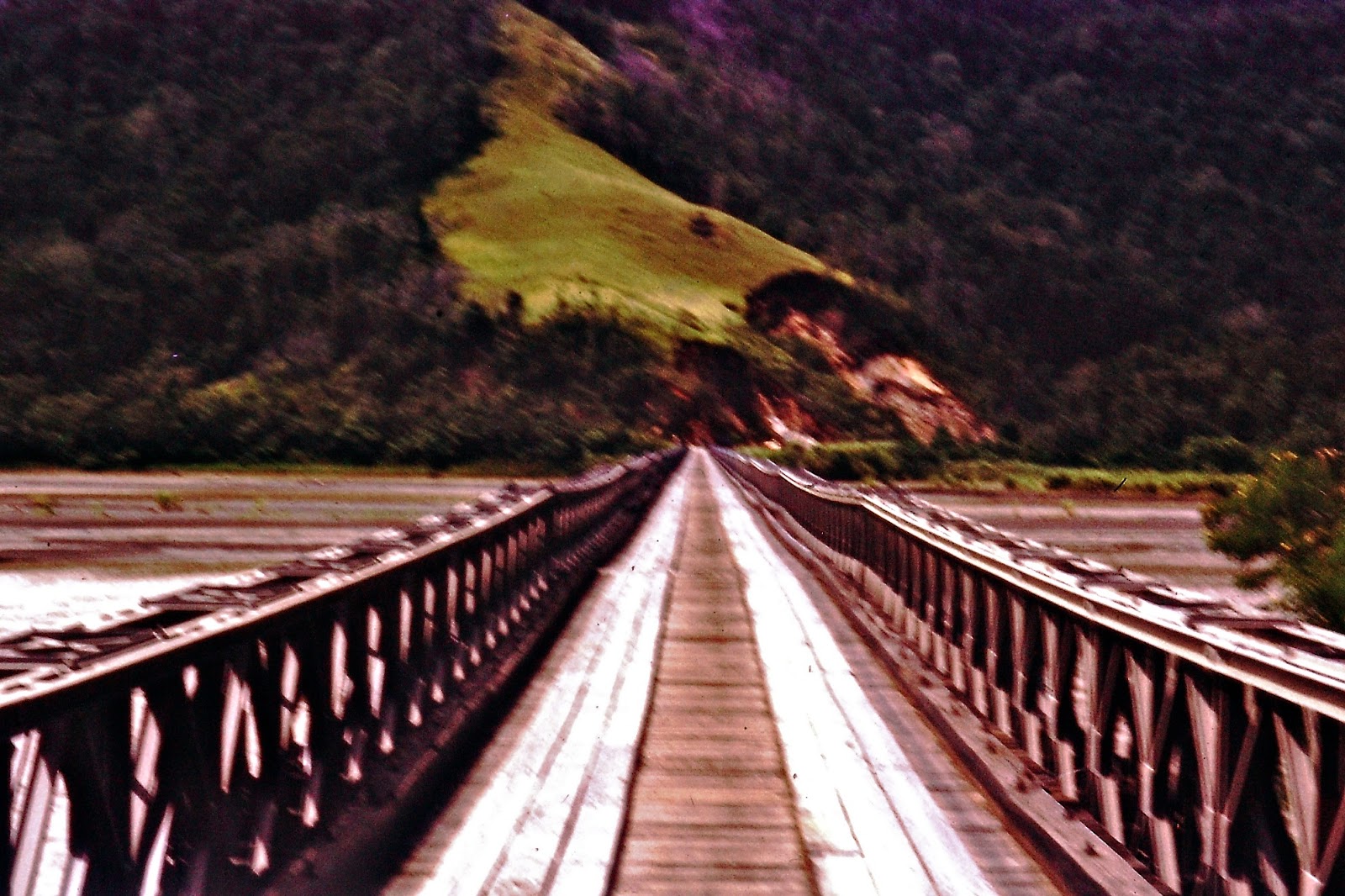 The bridge was a timber construction and it was very long and bumpy. 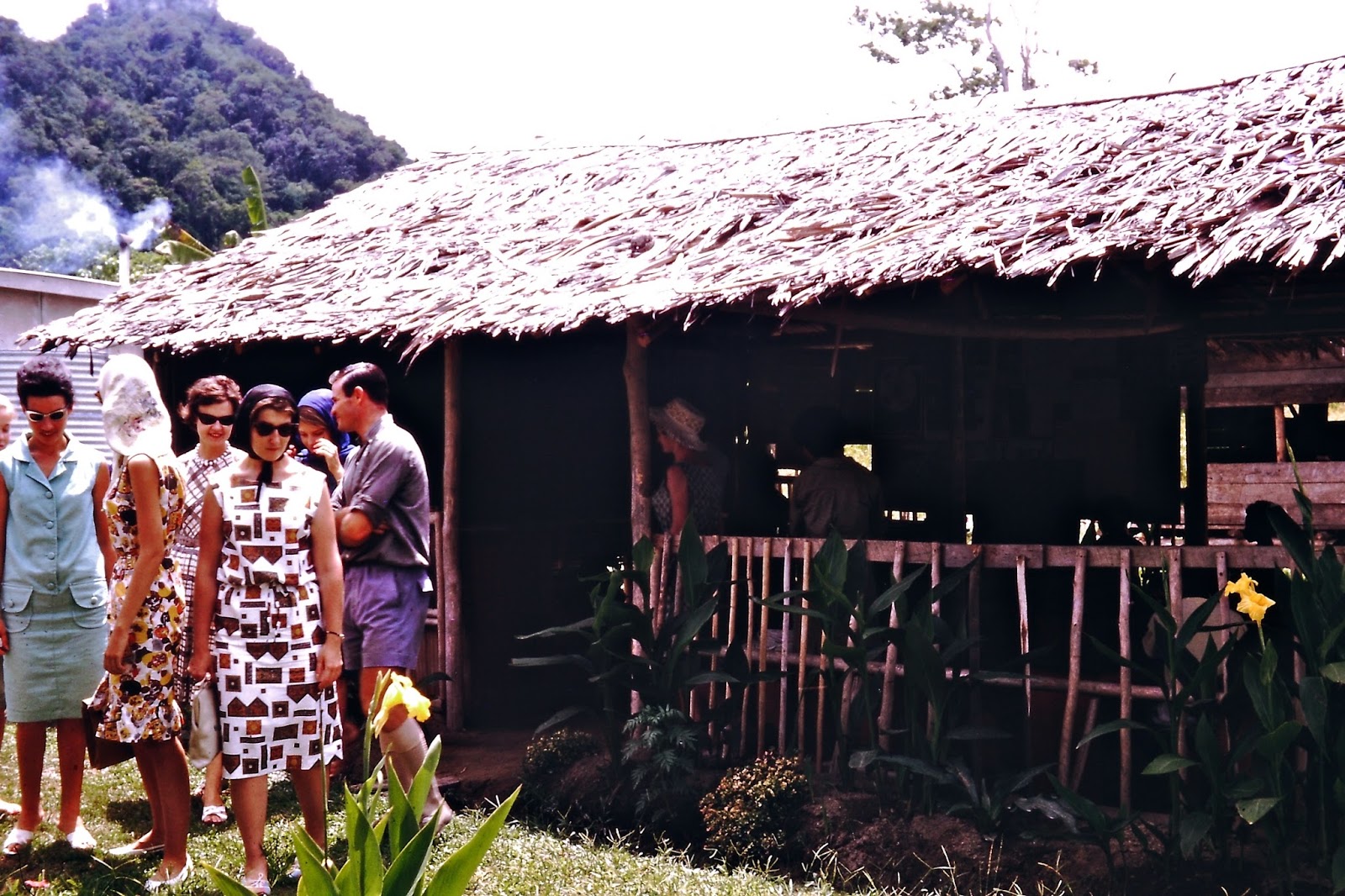 We arrived at a small bush school. It was a hot day as every day is so I think the smoke is from the cook house. Some of the girls have scarves on to stop their hair blowing about in the back of the ute. 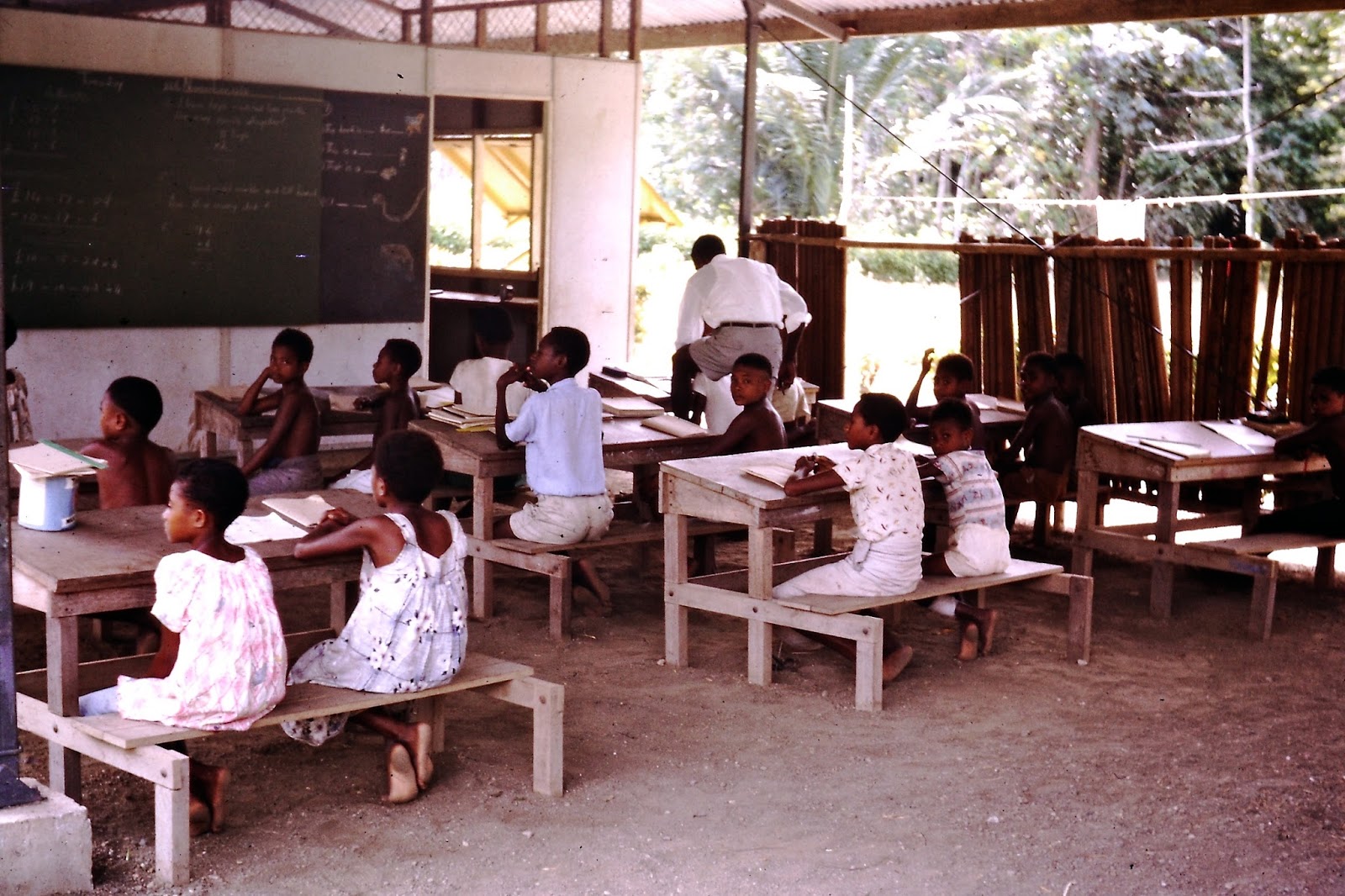 Inside the children were working quietly . The classroom had a dirt floor and half a wall. Often parents would come and hang over the wall to join in the lessons. 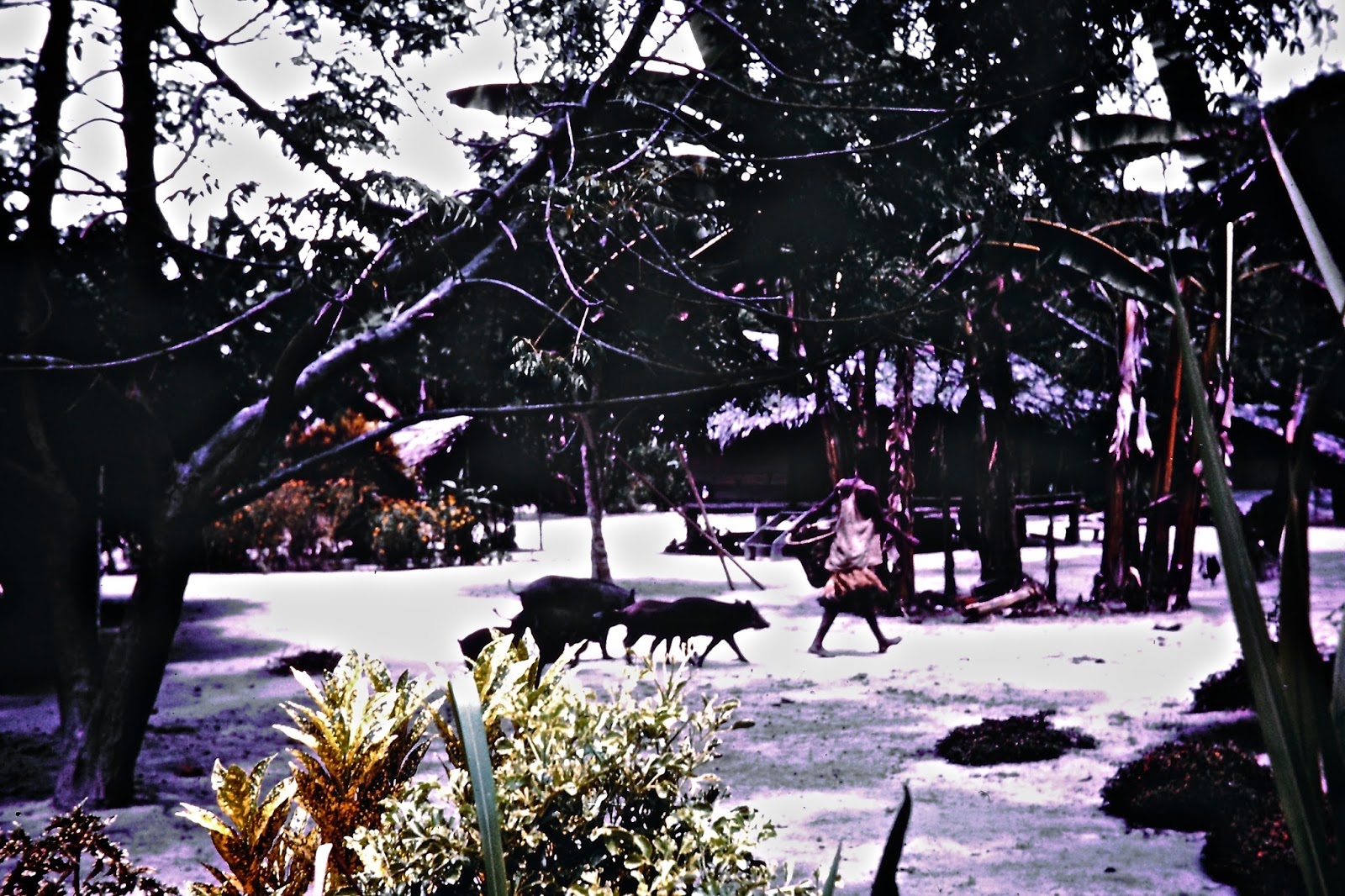 We were taken to a traditional village to see how the children lived. Here there is woman carrying a load with a some pigs following her. She may be going to feed them. The wealth of a family was ascertained by the number of pigs they owned. Brides would be bought with pigs. Their houses are made from grass thatch.

We stopped for lunch by a cool creek. We waded through the clear cool stream and kept the sun off by using huge leaves that were growing nearby.  Helen was one of my best friends at college. She was on a scholarship from the Lutheran Church. She was going to teach at a mission in the highlands. I never saw her again. Unfortunately, she had passed away by the time we had our first reunion in 2002. 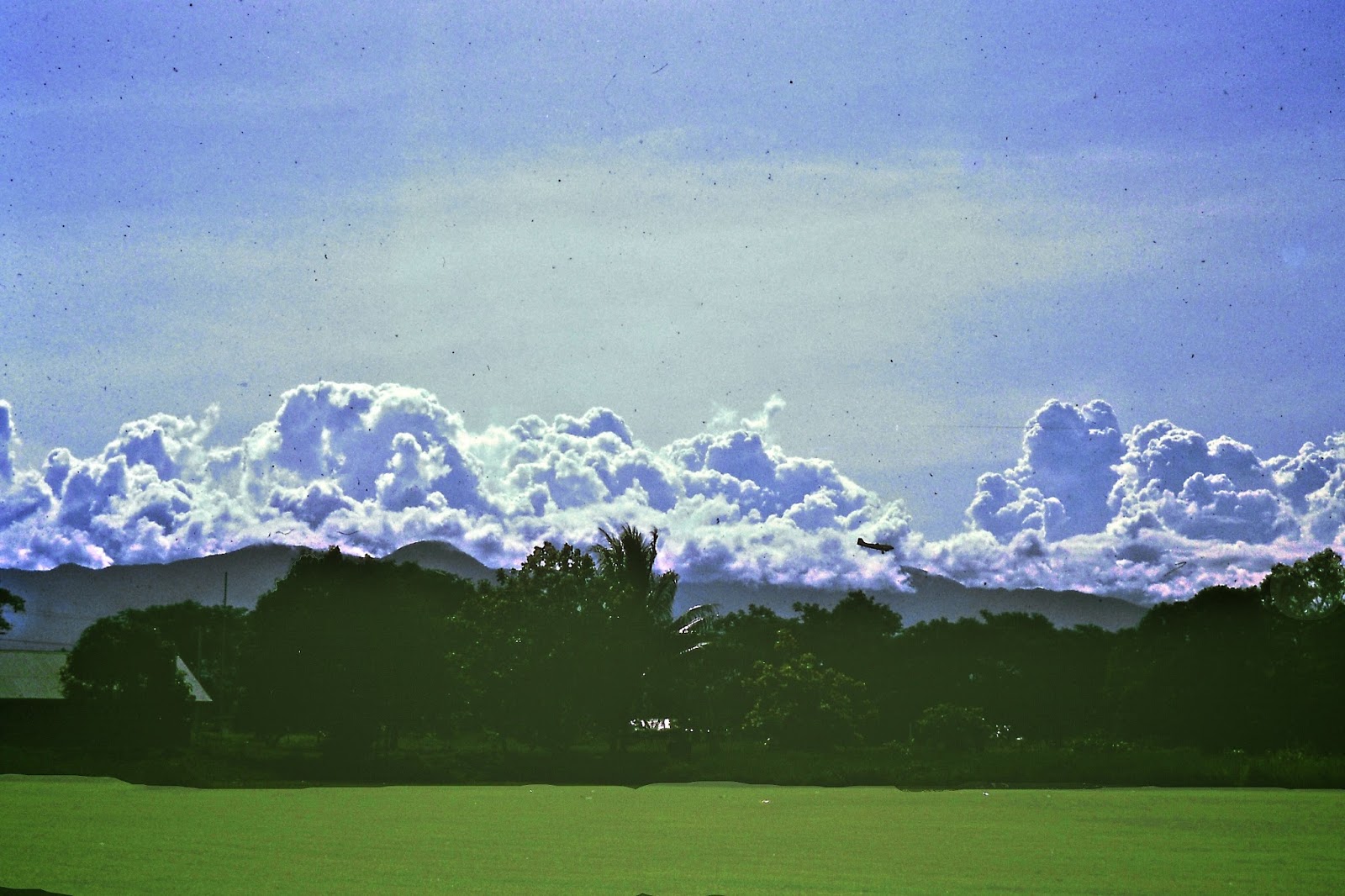 From the school yard we could see the afternoon storm clouds rolling down the mountains ready to drop torrential, tropical rain. This was a regular occurrence most afternoons. The plane was lucky to be landing before the storm hit. We also arrived back at the hotel before getting wet. Not that it mattered getting wet. It cooled you down and you soon dried out.


Soon I would be leaving my friends and winging my way to another adventure on my own.
Posted by diane b

Email ThisBlogThis!Share to TwitterShare to FacebookShare to Pinterest
Labels: Lae 1963, My Story, TPNG