For many years I have wanted to see the dolphins at Monkey Mia in W.A. and I was looking forward to this moment very much.  The morning after we arrived at Monkey Mia we were told to be on the beach at 7:30 and we should see the dolphins come in to be fed. I arrived early and the rangers told us we had to sit on the boardwalk and wait until we saw them and then walk very slowly to the edge of the water so as not to frighten them. The rangers have strict rules now on the amount of contact allowed and for how long. This has not always been the case.

Forty years ago a fisherman and his wife started feeding the dolphins when returning with their catch. As the news spread many tourists started arriving. They would feed and pat the dolphins and swim with them but when the area became a marine park and a dolphin research location it was discovered that the dolphins were dying. Investigations found that because the mother dolphins were coming into the shallow water to be fed and stayed there for a long time the babies could not get under their mothers to suckle. It was also found that dolphins could catch human viruses and die.

So rules were made. No one is to touch the dolphins or swim with them. Feeding time is limited to 30 minutes and only the same five dolphins are fed. The rangers choose a few people from the crowd to feed the dolphins. Although I realised I probably wouldn't be feeding a dolphin I wasn't upset as I could take photos instead and I agreed with the rules so as to save these beautiful animals from getting sick. 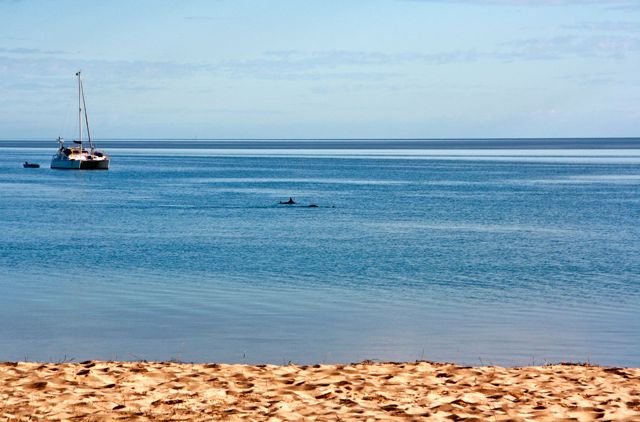 We waited for what seemed ages for them to arrive. The rangers warned us that they may decide not to come today. That got me worried until she said they have only done that twice in the past. There were about 100 people gathered on the beach on a signal from the rangers we moved to the water's edge. 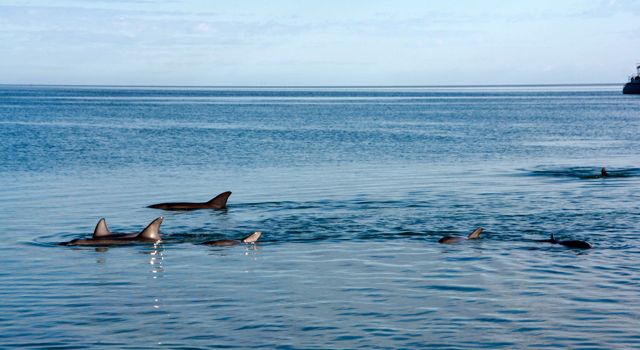 At first there were only a couple and then more and more turned up. It was a big pod. 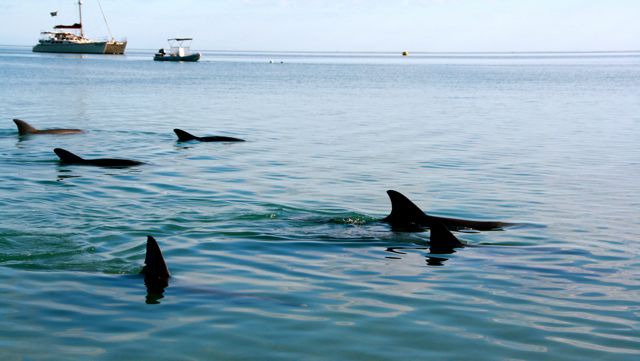 They swam back and forth and closer and closer. It was so exciting. 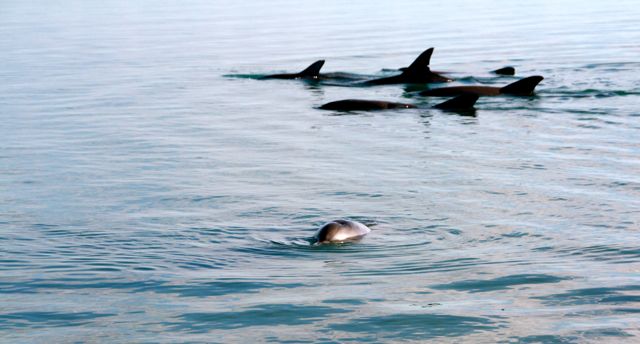 Then five of them left the pod and came in even closer when they saw the rangers with the buckets of fish. 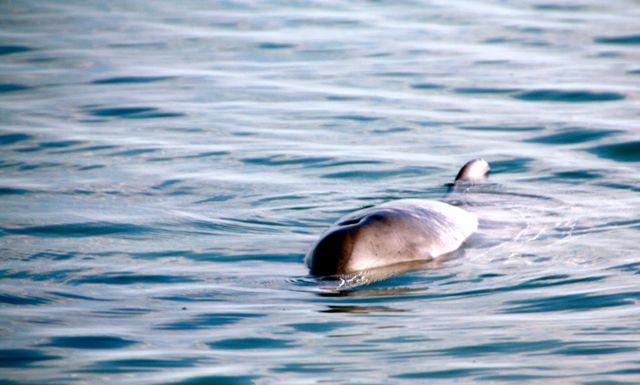 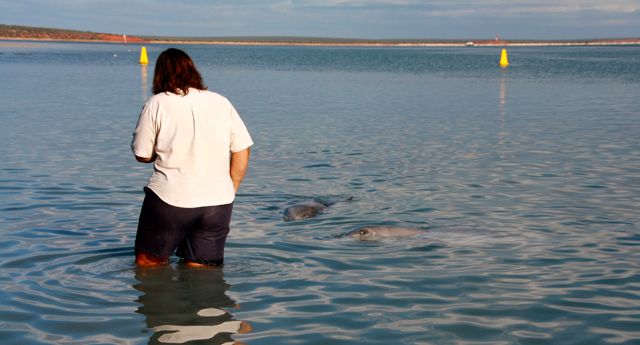 There were two rangers. They talked to the dolphins and had names for them. They told us how to tell their age by the number of speckly dots on their tummies. 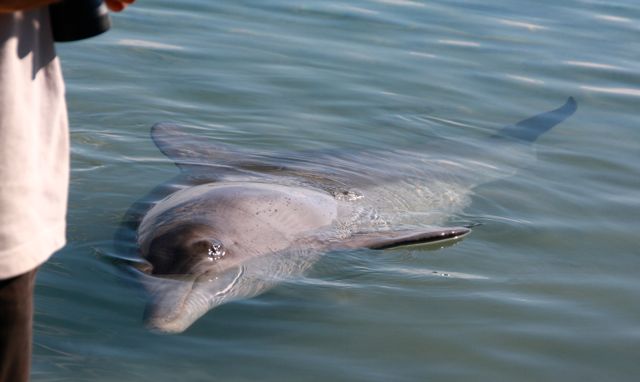 It was low tide and the water was a bit murky and hard for them to get in close. This one came to say hello and pose for me. 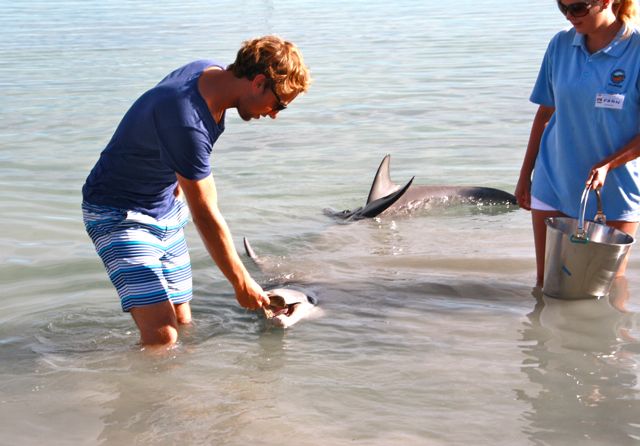 This lucky guy was chosen to feed one. 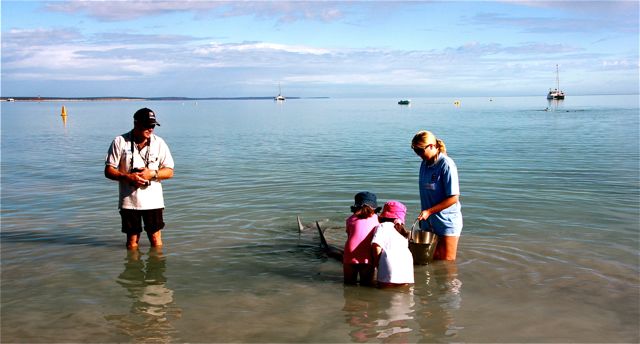 It was lovely to see children interacting with the dolphins. Notice in the background the rest of the pod were frolicking, romancing and chasing fish. It was a great experience and all over too quickly but they come back at lunchtime and in the evenings. 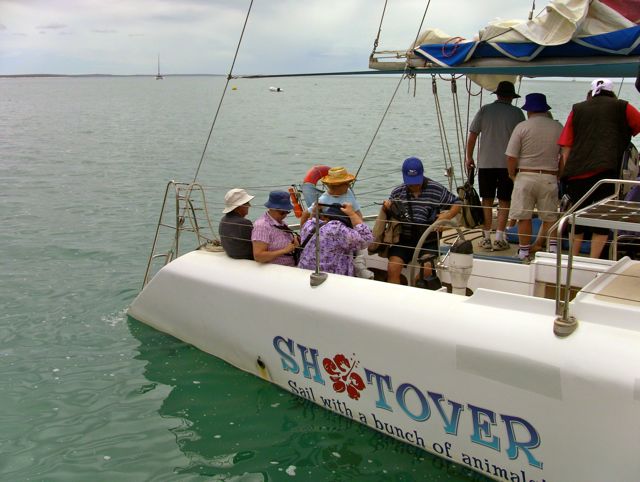 After lunch I went on a catamaran cruise to view dugongs these are big marine mammals similar to manatee and sometimes called a sea cow. They eat sea grass and are vulnerable to extinction. (I am second from left with pink shirt and blue hat) 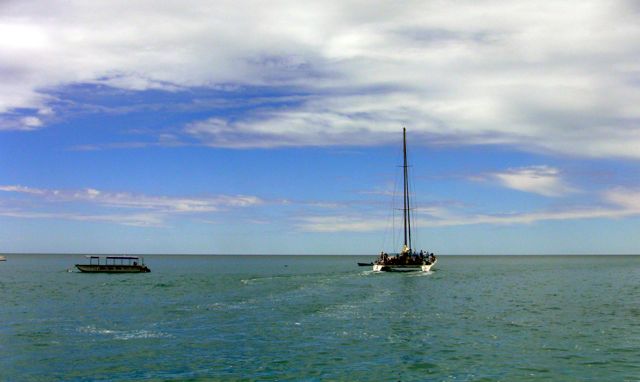 Off we go. Photo by Bill who stayed on terra firma. 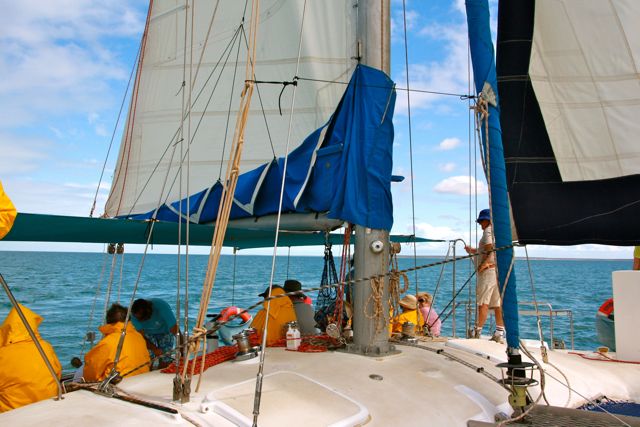 The wind got up and it was quite cold. Everyone had their eyes peeled looking for dugongs and turtles. 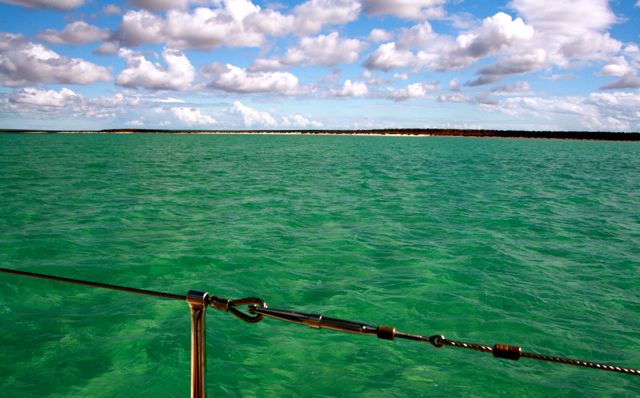 But all we saw was beautiful clear green water but not a dugong in sight. Anyway the cruise was fun.
So no whales in Albany and no dugongs here. That's wildlife for you. At least the dolphins came in.
Posted by diane b