How we celebrate Australia Day.  All over the country in cities and towns people celebrate in many, many different ways ranging from Flag Ceremonies to cockroach races. There are multi cultural and multi religious festivals, there are citizenship and honours ceremonies, there are concerts and fireworks, there are pig races, and dunny can (outback toilet) races and the list goes on and on. We usually have thong (rubber sandal not undies) throwing competitions but this year due to the floods we had gumboot throwing competitions. Many people have house parties too.The saddest part was that in the towns where lives had been lost in the floods, they had memorial services. 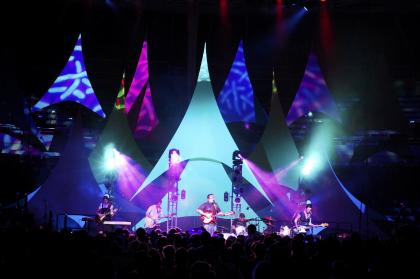 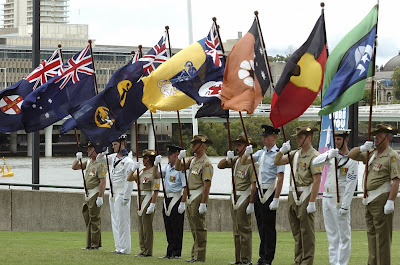 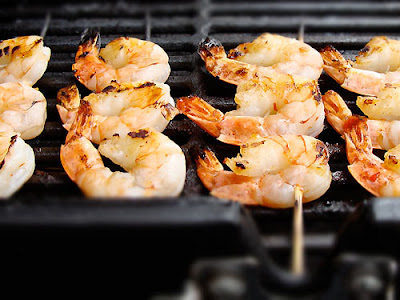 Most families have a traditional Aussie BBQ of steak sausages and prawns either at home, at a festival, on the beach or in the park. 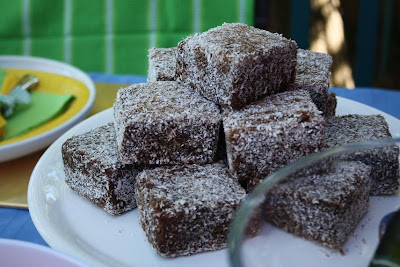 The BBQ is followed by traditional Aussie dessert, Lamingtons and... 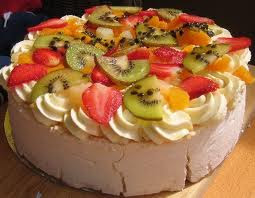 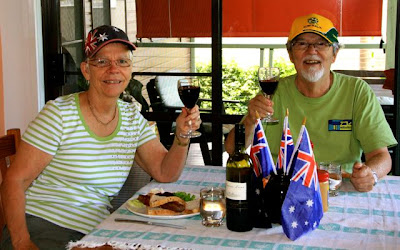 We didn't fancy joining the crowded roads to the crowded beaches or festivals or parks so we had our own little celebration at home in the cool air conditioning. It was a scorching hot day but with blue skies and sunshine, no rain in sight, which was wonderful. 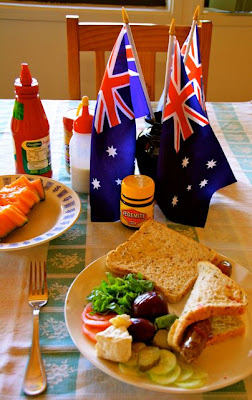 We have our Aussie hats on and had kangaroo sausage with salad and rockmelon (cantaloupe) instead of fattening Lamingtons and Pavlova. I even had the all Aussie spread, Vegemite, which only real Australians can manage to enjoy. Overseas people can't stand it and even Bill can't get to like it. We washed it down with a fruity Aussie Shiraz - Annie's Lane from Clare Valley, SA. 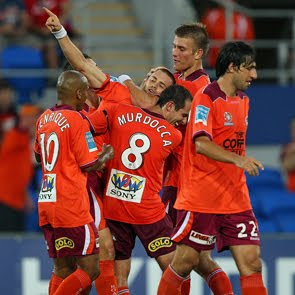 Besides all the festivities we also have  many important sports fixtures on this day too. The Australian Open Tennis, England v Aust Cricket, and my favourite sport Soccer Football.  My local heros, the Brisbane Roar played Wellington (NZ) and won 2-0 but best of all our national team, the Socceroos beat Uzbekistan 6-0 in the semi-finals of the Asian Cup, now they are in the finals against Japan. I had a great day watching these two matches.
Posted by diane b