On 23 June we joined the tour group which we travelled with by coach from New York to Los Angeles. 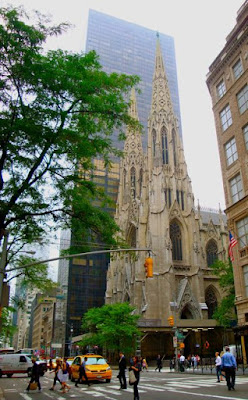 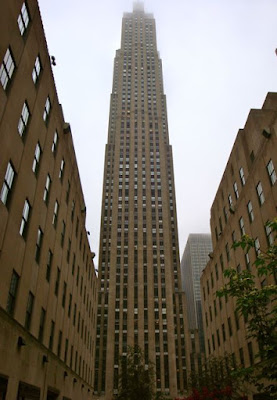 On the first day we had a tour of New York with a local guide, Mark, who was passionate about his city.
He gave us history lessons and interesting anecdotes about all the places we visited.
Here are some of them.
St Patrick's Church is on the left and the Rockefeller Centre is on the right. St Patrick's Church was built in 1858-78. It is the seat of the archbishop of the Roman Catholic Church of New York. 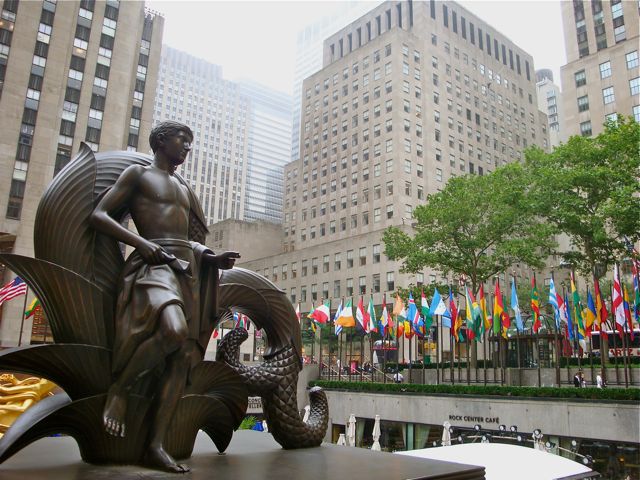 The Rockefeller Center is made up of 19 buildings which covers an area of 22 acres. It was developed by John D Rockefeller in 1930-33. 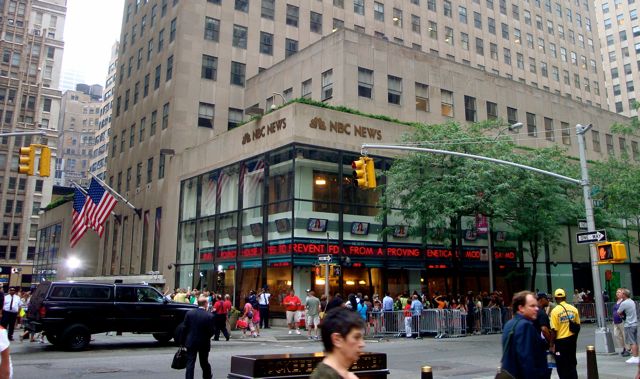 One of the most popular Rockefeller buildings is the NBC NEWS building, where every morning crowds hug the windows to watch the recording of "The Today Show" because they are filmed as the background for the show. So everyone is trying for their minute of fame. 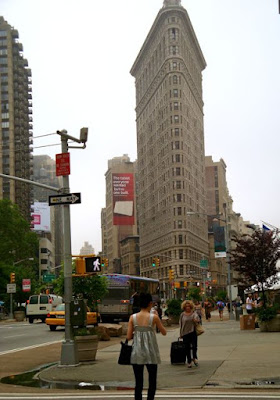 The Flatiron building was built in 1902 and was the first skyscraper north of 14th St. It is on the corner of Fifth Ave and Broadway. In NYC all the Avenues go from north to south, while the Streets go east to west but Broadway snakes diagonally across them all. It is a very easy city to find your way around, except when you forget whether you are going east or west, like we we did a few times. 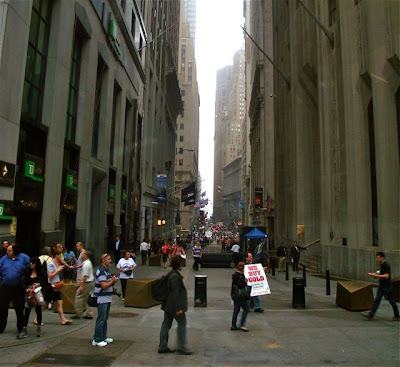 We drove past Wall St which is now closed to traffic since the terrorist threat has heightened. There are no places to park. We saw the huge statue of the Bull  at the end of Wall St but it was surrounded by tourists and not good for pictures. 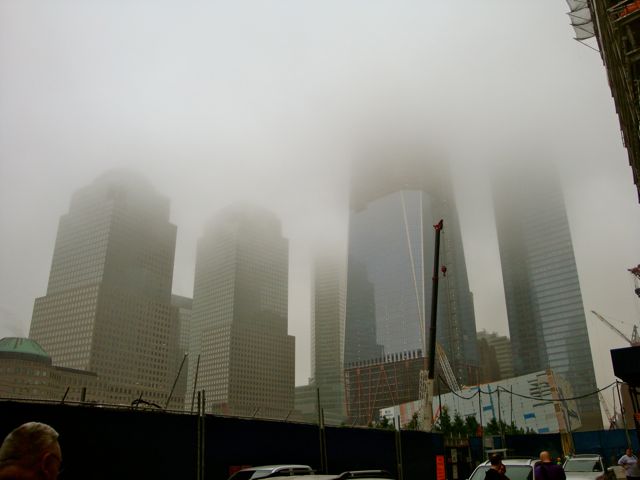 It was a dull, drizzly foggy morning and the towers were hidden. This is Ground Zero. Behind the fence is where the Twin Towers were and it is being developed into a memorial site. The two footprints of the buildings will become water features. The white tilted box structure with a few blue tiles is actually a museum about the disaster. The building under construction in the middle will replace the towers. It will be taller than the towers were, towering to a symbolic 1776 ft. (the year of independence) Six buildings were destroyed and they are going to be replaced by five. 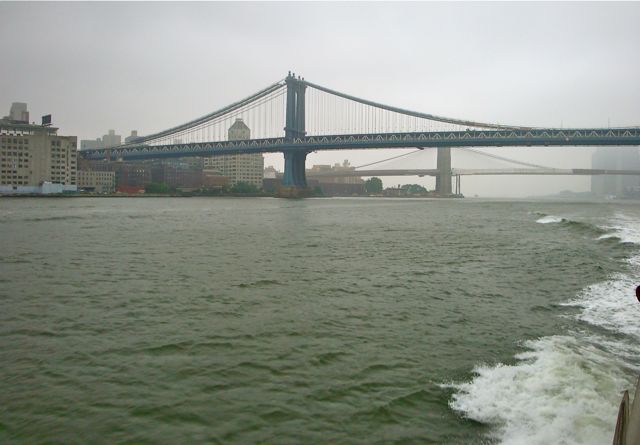 After the bus tour we were dropped at the ferry terminal for a harbour cruise. The weather wasn't improving but it was still awe inspiring to pass under the Brooklyn Bridge and to view... 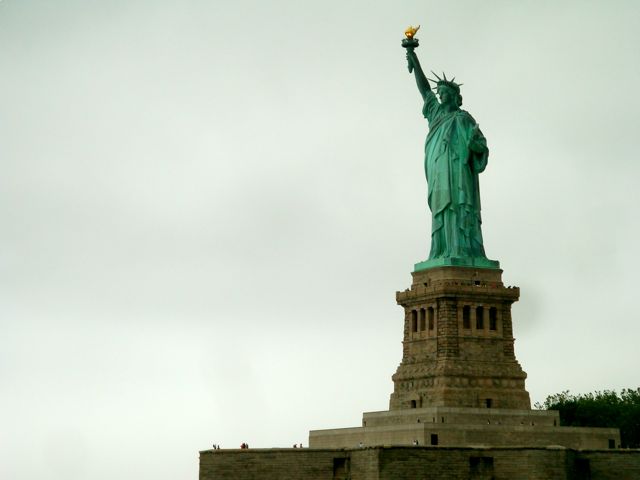 The Statue of Liberty. I was stunned at the size of her. See the little people at the bottom. 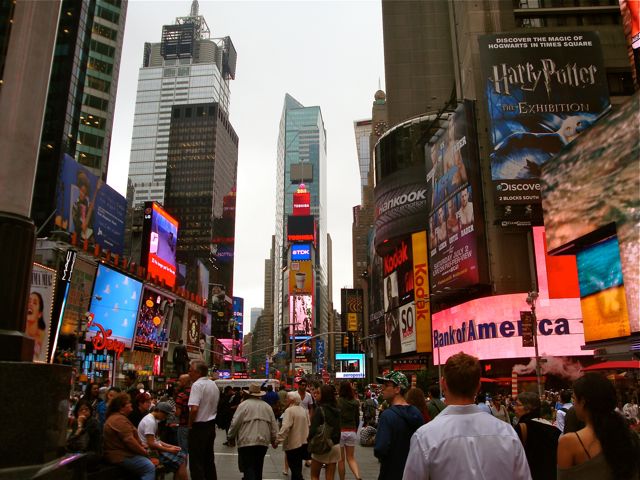 We had the evening to ourselves so we walked and walked to Times Square to try to buy a last minute ticket to a Broadway show. The crowds and queues were unbelievable. This is the place where millions watch the ball drop at midnight on New Year's Eve. Can you see the little red ball on the tower in the middle. 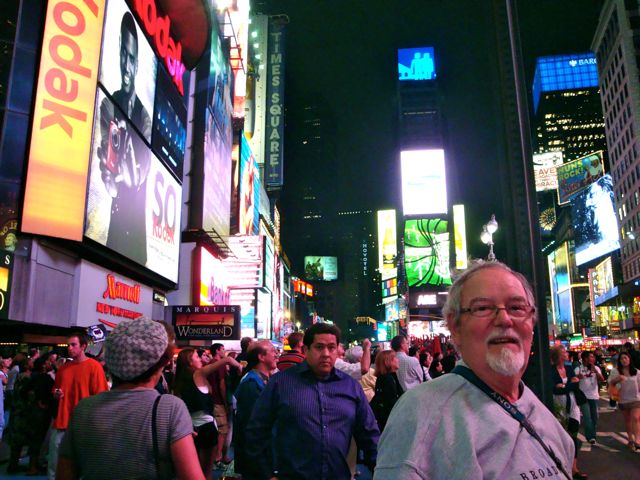 Bill loved the energy pumping through the square. The tourists in the background are looking at themselves being televised onto......... 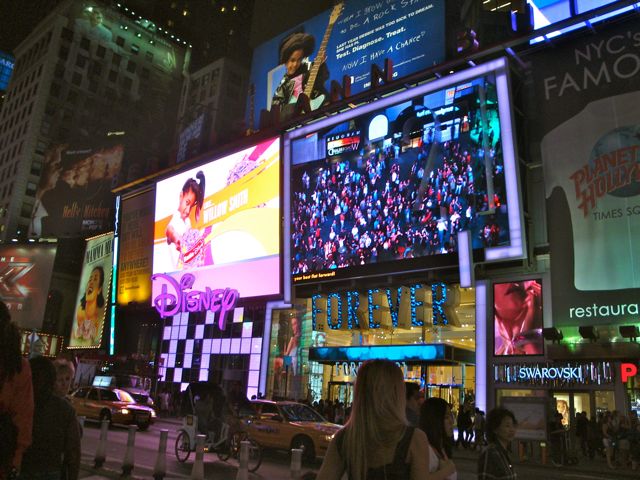 this huge screen on the side of a building. Of course we had to look for ourselves and give a wave.
We were lucky to get discount tickets (without queuing) for Billy Elliot. We both enjoyed it very much.
The next day it was "bags out at 6:30 and leave for Philadelphia and Washington at 7:30"
While in New York I was hoping to meet a great blogger, Pat from Mille Fiori Favoriti but unfortunately she was not well enough to meet us. However I did get to hear her voice on the phone and that was nice.
Posted by diane b