OUR FIRST HOLIDAY IN AUSTRALIA 1956

We migrated from England in 1949 to Sydney, I was seven. My parents had a difficult start, our first home was a tent and then a garage for five years. In that time my parents worked hard and built our house on weekends and annual holidays.
By 1956 the house was finished except for the garden and on going improvements. Mum and Dad were still both working, I was in high school and David, my brother, was working in the Territory of Papua/New Guinea.
My parent’s next goal was to own a car and go on holidays. In the winter of 1956 they had bought an Oldsmobile and planned a caravan holiday to Brisbane via the inland, New England route and return via the coastal, Pacific Highway. Their friends, Ida and John and daughter, Jenny were going to accompany us. 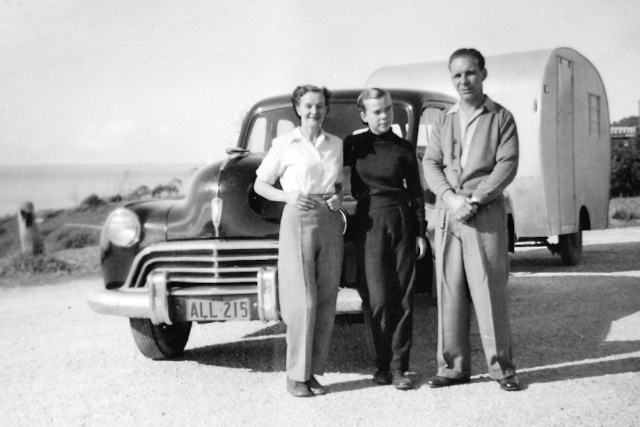 Mum, me and Dad enjoying our first holiday in Australia. 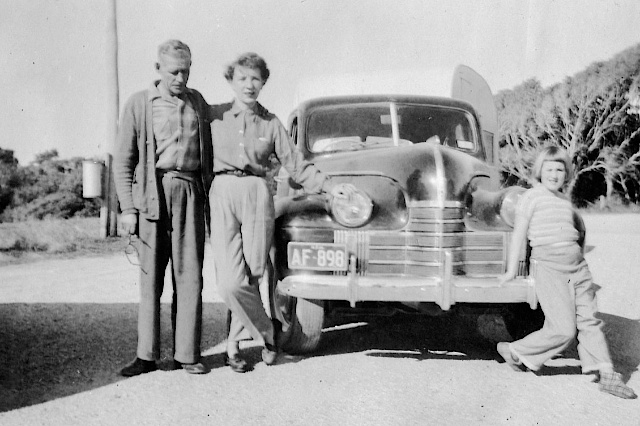 John, Ida and Jenny also migrated from England a little after us.
Dad and John had worked together in England driving trucks.

There is an interesting story about Jenny: Ida and John were unable to have children and when they lived in England they had taken care of their niece, Jenny, from birth, as Ida’s sister had other children and had been finding it hard to cope with all the children and the financial burden. Ida missed the little girl very much when they left England to start a new life in Australia. So, Ida asked her sister if they could adopt Jenny and bring her to Australia and give her a better life than could be provided for in England. The sister hesitated for some time, understandably. Finally she agreed and the papers were signed. Jenny, at the very young age of 6 was put on a plane as an unaccompanied child and flown from London to Sydney. Back in the 50’s that was a two or three day trip. It was headline news in Sydney and there was a photo on the front page of the newspaper of Jenny with a teddy arriving at Sydney and meeting her Aunt and Uncle who were now her mother and father. She certainly was a brave little girl and QANTAS staff did a good job keeping her happy.
Anyway the six of us set off in two caravans for our first holiday in Australia and our first holiday in seven years. My parents had spent the first seven years in Australia working, saving, and building a home. So they had been looking forward to this day for a long time.
Posted by diane b

Email ThisBlogThis!Share to TwitterShare to FacebookShare to Pinterest
Labels: Enjoying Australia 1956, My Story