TOO BUSY TO BLOG

On the morning of April 27 at 5:00am we had tap on our bedroom door.  Sonya announced her time had come to go to the hospital and so we were on Fox duty. Off they went and luckily not much traffic at that time so they were at UCLA Ronald Reagan Medical Centre within 13 mins which was Bernie's all time record as he had practiced it before. 2 hours later Banjo Foster Curry at 9 pounds came into the world via natural means without pain killers. I can't believe how tough is my daughter.

Fox was an angel when he woke up and called for mummy and I went in to pick him up and change him. I thought we would have tears when he found Mummy and Papa had gone. We told him where they had gone and he seemed okay about it. We gave him breakfast, played with him and took him to the park. Then it was home for lunch and a nap. Luckily Bernie, all excited, came home from the hospital in time to put Fox to sleep, as he's a bit fussy about who puts him in his cot. 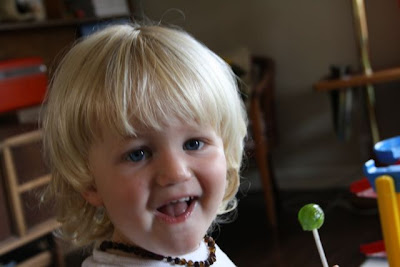 Sonya and Banjo came home from hospital today earlier than advised but Sonya couldn't sleep there from all the interruptions. So it has been a very exciting, busy day for all of us. Sonya is very tired and Banjo isn't sleeping much between feeds. Fox has been very good and is getting used to baby but still a little put out that mummy is still not very active.

It has taken me all day to get this post done, in between playing with Fox, rocking the baby, fixing snacks, washing clothes and washing dishes. Much more busy than being at home, but we are very proud grand parents.