A BLAST FROM THE PAST-Pt Moresby Judo Club from the 60's.

In 1963 at the ripe old age of 21, I went to TPNG (Territory of Papua New Guinea) to teach there. I joined the Judo Club and made some friends. A few years ago one of the fellows, Charles, started to try and find members of the club in Australia. (Most of us had returned to Australia after TPNG gained independence.) Charles found a few of us and organised a reunion, since then we have had a reunion every year. This year it was held in Stanthorpe, a small town in the Granite Belt ranges, 223km west of Brisbane. Charles sent me some old photos of the club members in the 60's.


Charles is 2nd from left in the back row.

Some of the friends I made were Del, Graham and Charles.

46 years later we meet again. This time Charles had found Michelle a previous junior member of the Pt Moresby Judo Club. Michelle is opposite me. 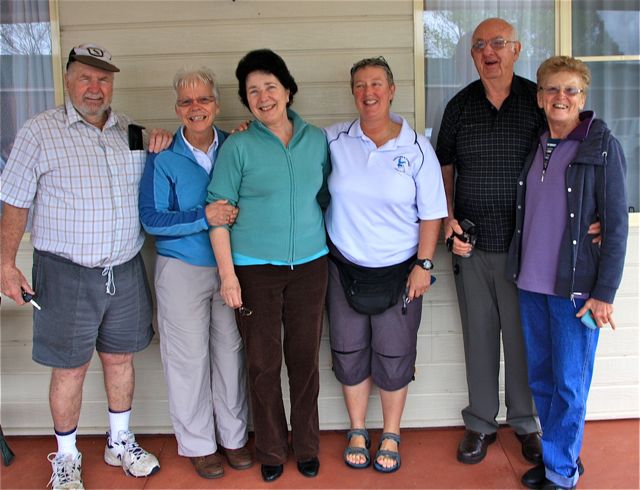 Graham, me, Penny, Michelle, Charles and Del.
(Don't pick on us oldies or you'll be in for a surprise...who am I kidding)

This is young Michelle (9yrs) in action. Graham observed how tenacious and strong she was and nicknamed her "Tiger".
In 1968 she became the junior TPNG champion.  In 1971 she moved to Melbourne and joined Lilydale Club and she became the Victorian state champion in 1975 and was undefeated for 8 years. In 1977 she earned a Black Belt 1st Dan. In 1978 she was selected in the Australian Team and competed for her country for 3 years. In 1979 she was the Australian Champion. Today Michelle is a  teacher, still teaches at  the Lilyvale Judo Club and is a referee for Judo. She now holds a Black Belt 5th Dan. (And her first teachers were Charles and Graham.) She is also a grandmother.

Penny getting sent to the floor.

In 1965 Charles went to Japan to train for six weeks, while there he earned his Black Belt 1st Dan. In 1971 he and Penny were  transferred to Lae, where he started another junior and senior club, He was awarded life membership of the Pt Moresby Judo Club and the PNG Judo Federation.

I was only in the club for one year 1964 and obviously didn't have any photos taken. I reached the  Orange Belt level. I especially enjoyed the self defence lessons.