DUCKS TAKE OVER THE FOYER FOUNTAIN

I once saw on TV an article about the "Peabody Ducks". There are five ducks that live in the penthouse of the Peabody Hotel in Memphis, TN, USA. Everyday at 11:00am the ducks come down in the elevator to the foyer fountain and swim there until 5:00pm when they are marched back to the elevator on a special red carpet by the Duckmaster. This tradition has been going for 80 years.
When we were in Memphis last month Bill and I thought it would be fun to see the march of the Peabody Ducks our friends Kathy and Rob were not so keen but we dragged them along anyway. They thought we were nuts wanting to wait with crowds of tourists to see ducks. 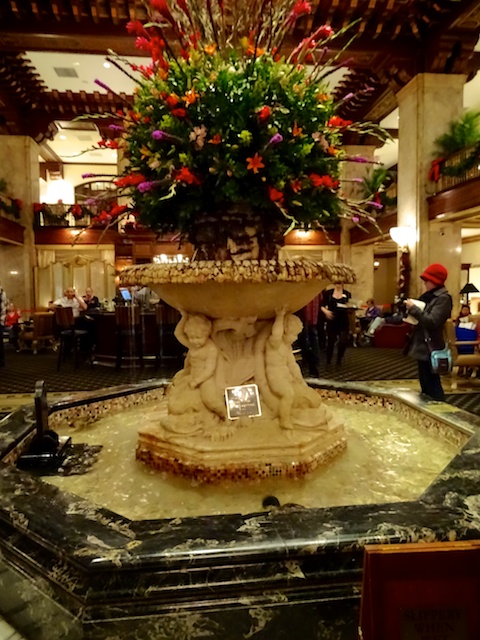 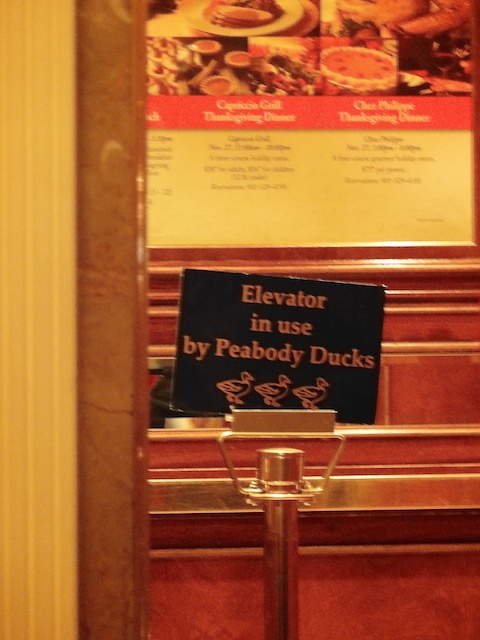 The fountain is cut from one enormous piece of travertine marble made and shipped from Italy for the opening of the hotel in 1925. The ducks are hiding behind the front edge. The flowers are changed every second day in the middle of the night.
The elevator is stopped for guests and a sign placed inside saying 'Elevator in use by Peabody Ducks. 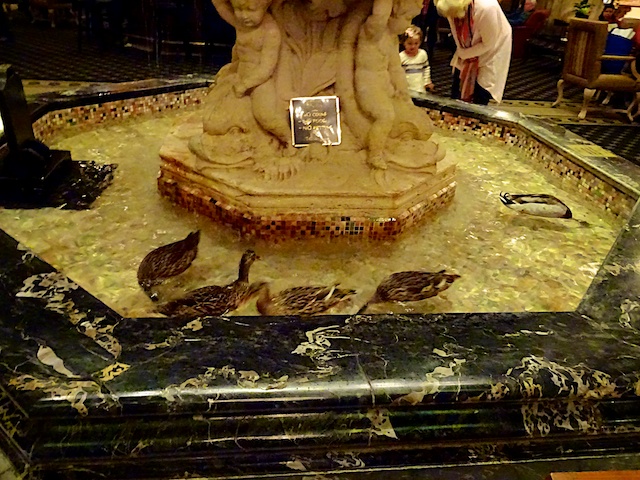 Hundreds of tourists pour into the foyer as it gets close to five o'clock. There are four female and one male Mallard Ducks. They are raised by a local farmer and each team only live in the hotel for three months and then they return to the farm where they are free to live as wild ducks. 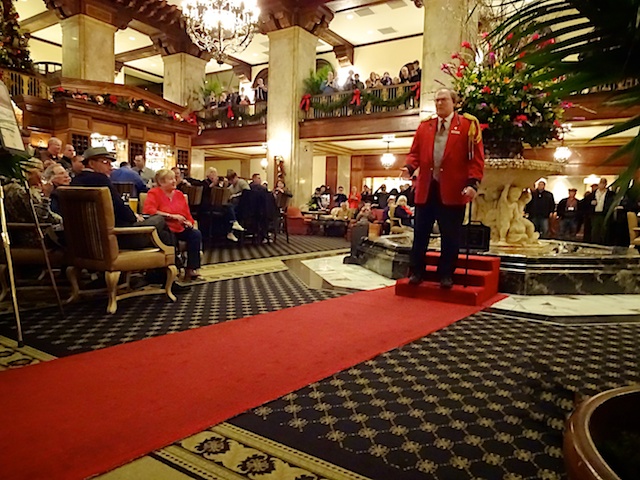 After waiting for nearly an hour the Duckmaster (full of his own importance) proceeded to tell us the legend of the Peabody Ducks. Back in the thirties Frank Schutt, General Manager of the hotel  and a friend returned from a hunting trip. The men had a little too much whiskey and thought it would be funny to put some of their live duck decoys in the beautiful fountain. They were an instant hit with guests so the ducks stayed. In 1940, bellman Edward Pembroke, a former circus animal trainer, offered to deliver the ducks to the fountain each day and taught them the now famous Peabody Duck March. He became the Peabody Duckmaster for the next 50 years. 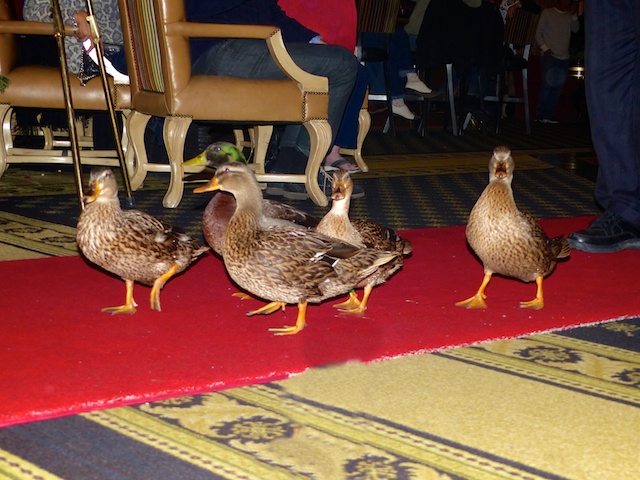 The marching music starts and the ducks march from the fountain to the lift on their red carpet. 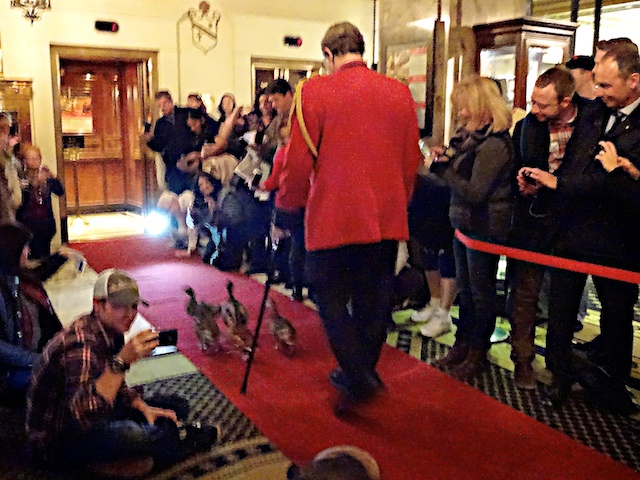 Into the lift and up to the Duck Palace on the roof. 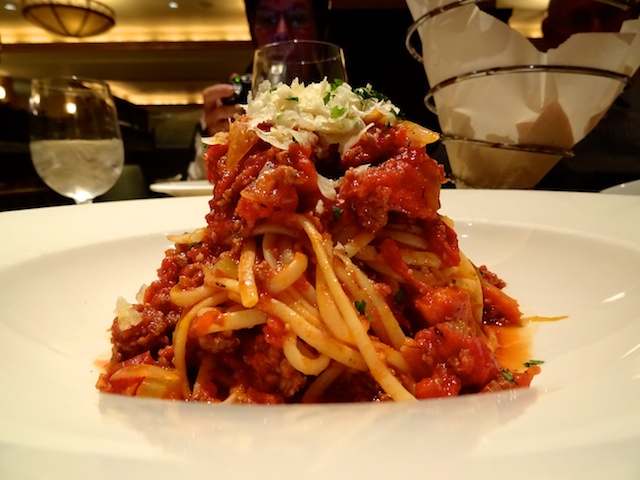 After the long wait for a few minutes action we decided to make the most of the visit and have dinner in the hotel. We found an Italian restaurant. I had spaghetti bolognese. 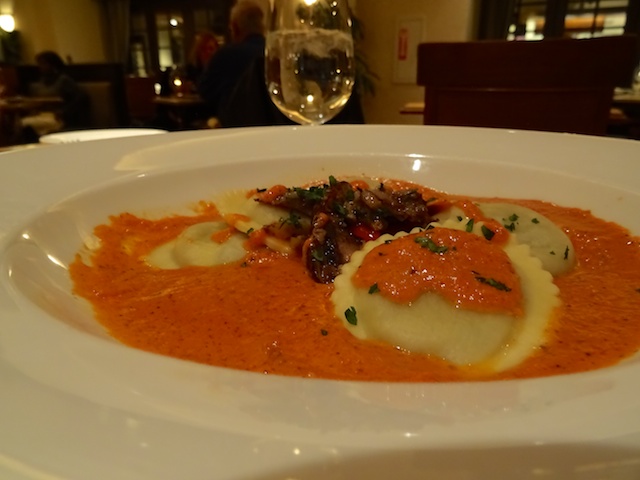 Bill had spinach and ricotta ravioli 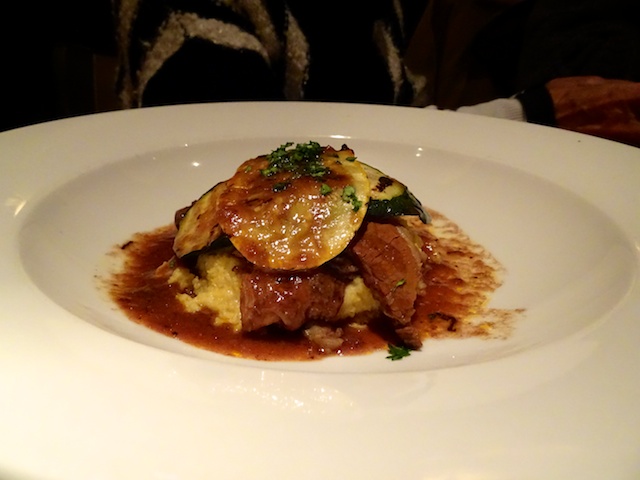 Kathy and Rob had Brisket.
They don't serve duck at the Peabody Hotel.