This post is for Julie's Taphophile Tragics meme:
Way back in 2002 we went on a holiday to Norfolk Island. I can't believe that was ten years ago. How time flies when you get old. Anyway back to the story.

Norfolk Island is a small island in the Pacific Ocean between Australia and New Zealand. It has a very colourful history. It was colonised by the British as part of Australia in 1788. It served as a penal colony for the worst convicts until 1794. From 1856 it was settled by free settlers and in1901 it became a territory of Australia and it still is today. It is also a tax haven. Today the island's primary economic activity is tourism due to its historical buildings and colourful history including the Pitcairn Islanders and the Mutiny on the Bounty. So we did our bit for their economy and joined in the many tourist activities that they provide. (photos have been scanned from photo album) 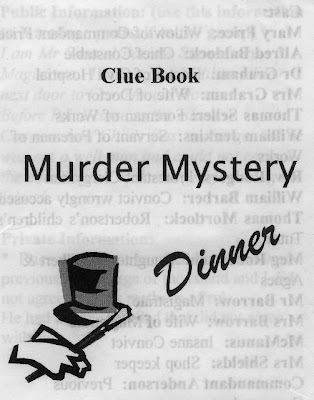 One of the activities was a Murder Mystery Dinner, where you become a character in a murder mystery  story. You have to ask questions of the other characters and try to find out who is the murderer. At this party the murder mystery was based on a true event that happened in Norfolk Island's past. We were given a booklet that gave us some background information on the characters and the crime. We had to dress up as the character we were given.

I was the Commandant's wife and Bill was the Chief Constable, Alfred Baldock. He was detested by most on the island, he was a former convict but now mistreated the rest of the unfortunates. He was a homosexual which was against the law then. As you can tell we had loads of fun trying to find out which one of us was the murderer.
The next day we went exploring and visited the Norfolk Island Cemetery and Bill  found the grave stone of his character Alfred Essex Baldcock. 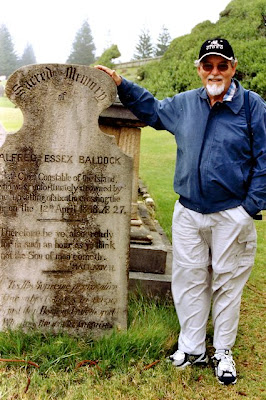 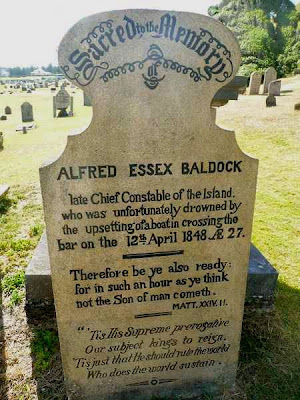 Alfred Essex Baldock  late Chief Constable of the island, who was unfortunately drowned by the upsetting of a boat in crossing the bar on 12 th April 1848 aged 27. (click on pic to enlarge). The right hand pic is from the web and the headstone has been restored and so have many of the others. This cemetery dates back to 1825 but there is evidence of earlier burial grounds on the island.