We had a Swiss backpacker stay with us for a while. I took her to see some Koalas at the Koala Centre in Daisy Hill Conservation Park. It is an education centre to teach the public about the decline in population of Koalas and how we can protect them. They care for rescued Koalas, usually babies/joeys that have been found in a mother's pouch after she has been killed by a dog, a cat or a car. When the joey has grown big enough, it is released back into the forest near where it was found. 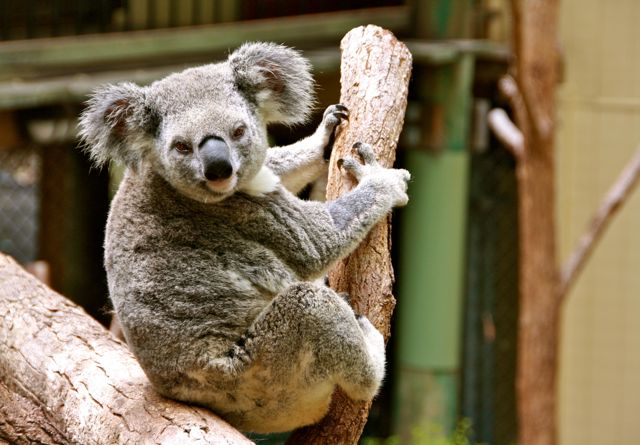 Koalas are not bears and we have been taught not to call them Koala Bears any more as they are not related at all. 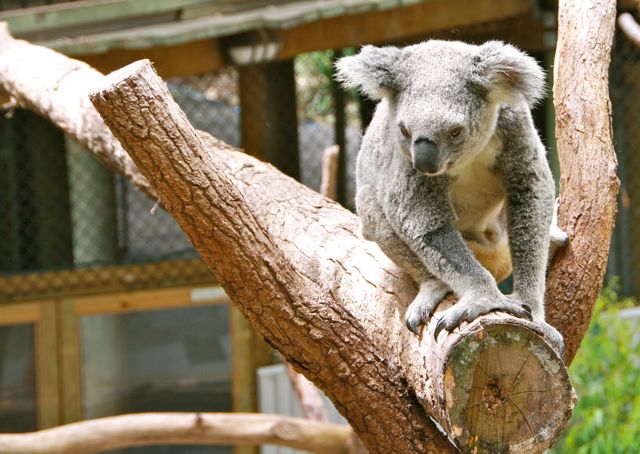 They are marsupials, which means they are a special mammal that give birth to a tiny baby called a joey, which is no bigger than a jelly bean. It climbs up from the birth canal into a pouch and finds a teat to hang onto for the next six months .  Can you see her pouch opening which has a draw string muscle? 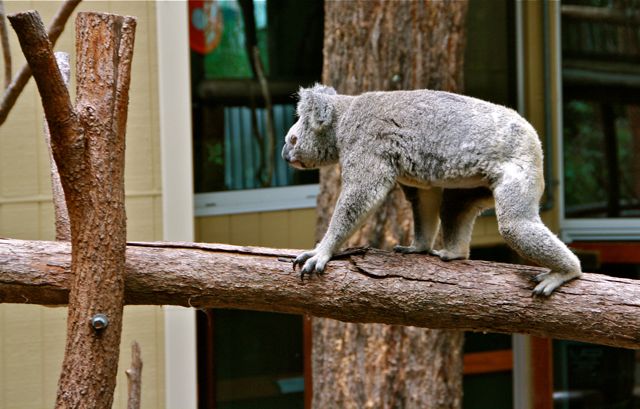 Koalas are nocturnal and they climb down from their safe haven high in the Eucalypt Tree at night and walk from tree to tree eating only Eucalypt leaves from certain species of trees. 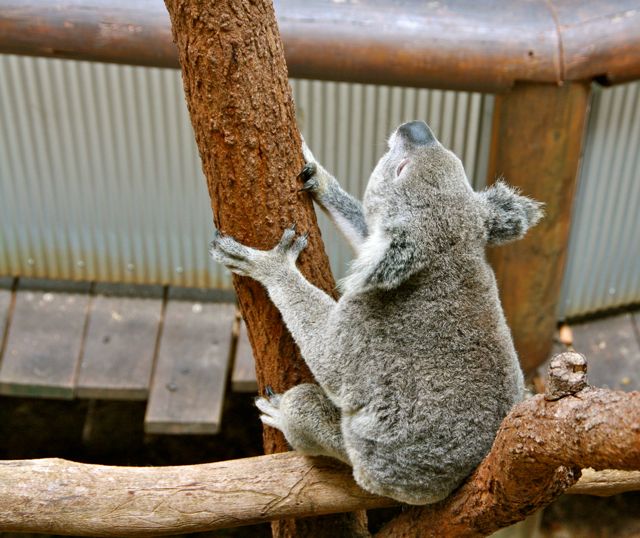 They are usually solitary animals. When they want to mate they raise their head and make a loud growling, grunting noise. It sounds like a pig. 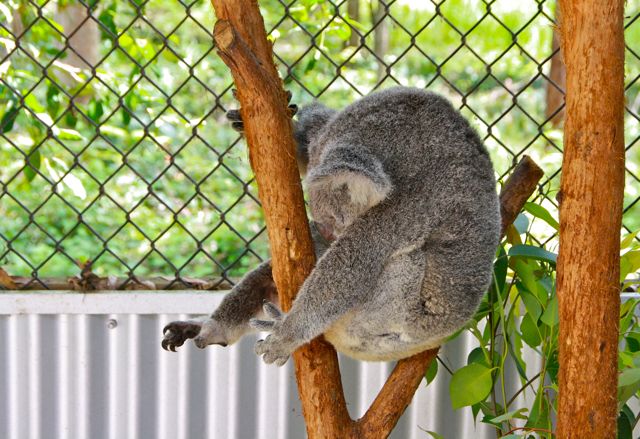 They sleep most of the day. When it is cold they curl up in a ball but when it is hot they stretch out their limbs. 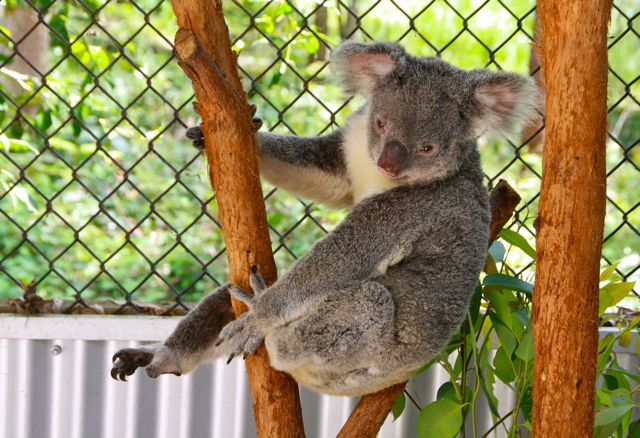 And when they wake up they are so darn cute but take note of their big, sharp,strong claws. They are not easy to catch, if they don't escape by scooting up the tree, they will claw and scratch you to shreds. Rangers catch them when they are sick and for research. They use nets and bags. In tourist parks they are tame and you can hold them for photo shoots quite safely. 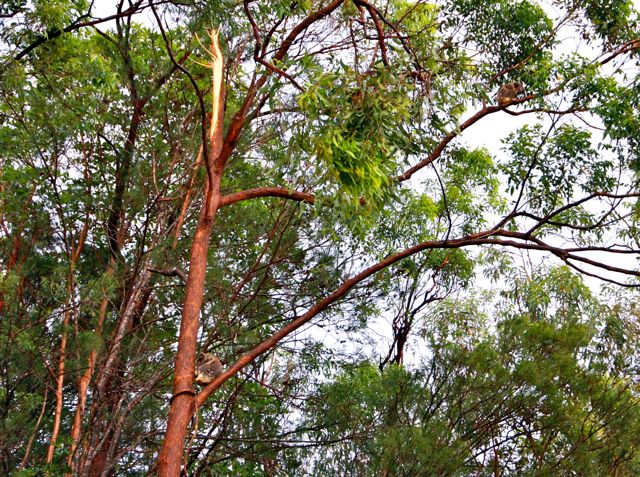 It is hard to see Koalas in the wild. Last week we had a huge storm and there were two of them in a tree behind our neighbour's house. They used their strong claws to hang on while the wind and rain lashed them to and fro. Can you find them? 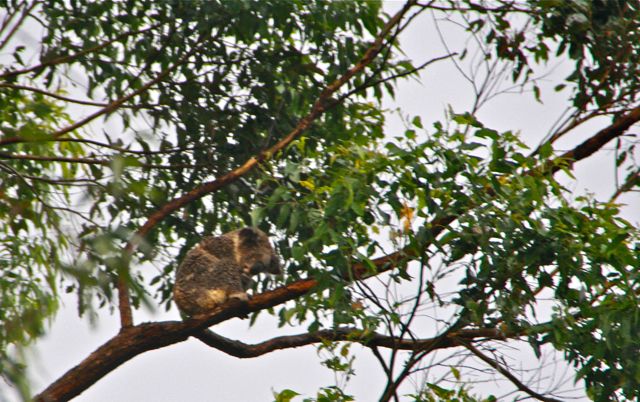 It was hard to hold the camera still under an umbrella and with rain drops on the lens. 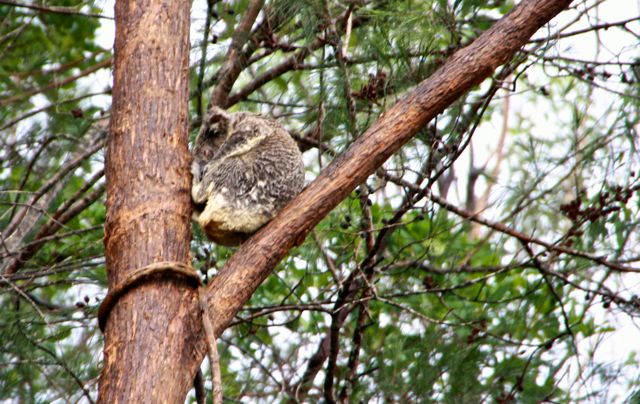 You can see his wet coat and he is curled up trying to escape from the elements.
They are gorgeous little animals, a little smelly, up close. It is sad that housing developments are eating away at their habitat. 4,000 per year are admitted to the Koala hospital in Brisbane.
Posted by diane b

Email ThisBlogThis!Share to TwitterShare to FacebookShare to Pinterest
Labels: Koalas in Logan