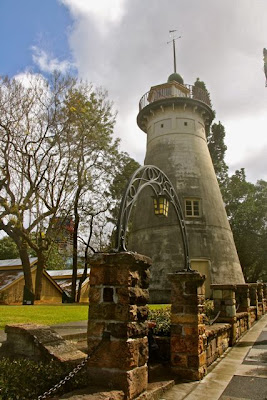 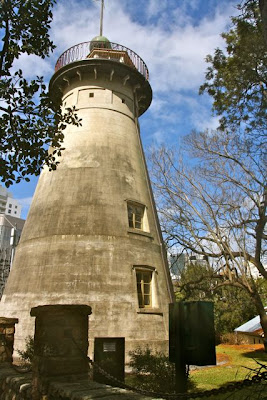 The Old Windmill minus its sails is the oldest surviving building in Queensland.

It was built by convicts, supervised by the commandant, Captain Patrick Logan in 1828. Logan realised the penal colony of Moreton Bay needed a mill to grind the wheat and maize grown in the settlement, which is now the city of Brisbane.

Even though the windmill sits on the top of a hill, there was rarely enough wind to push the sails to power the mill so convict labour was used to turn two treadmills. In 1842 the penal colony closed and free settlers arrived to develop the city.

In 1861 the sails were removed and the windmill became an observatory and signal station. A time ball was added which fell at 1:00pm everyday until 1930 when the City Hall clock took over.

Later it became a fire tower and later still in 1934 it was used as a radio and television research station. Now it is maintained as an historic icon of the city of Brisbane.
Posted by diane b