Twice in one Week

Now I bet that title had you wondering. No its not what you might be thinking it is actually two visits to Ipswich in one week and we hadn't been there once in the last 20 years or so. Its funny how things often happen like that. We were invited to lunch with other friends that we made years ago in Papua/New Guinea. We all belonged to the same Judo and Scooter clubs in P/NG which I wrote about here.Today two of our friends were passing through Brisbane after a trip to the northern tip of Australia. We picked them up at their hotel and took them to Ipswich where they had left their car with another friend from P/NG days. We were impressed with the views of Brisbane from their hotel room on the 24th floor. 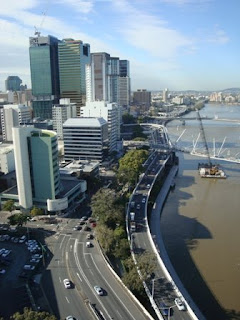 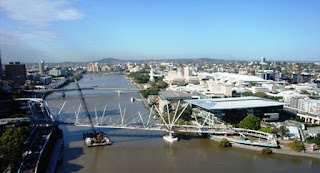 There is a new foot bridge being built to link the CBD with South Bank, the cultural centre of Brisbane. There you will find: The Gallery of Modern Art, the State Library, the Museum, the Art Gallery, the Opera House, Theatres, Cinemas, restaurants, the Conservatorium, the Convention Centre and the Parklands. 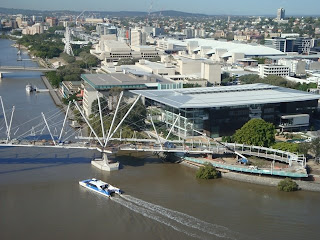 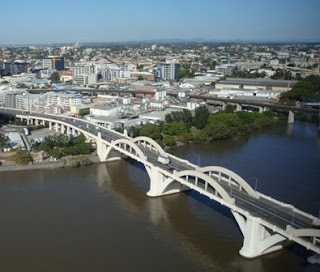 Two other bridges upstream. The Old William Jolly Bridge sometimes called the Grey St Bridge and the rail bridge in the background. So after oohing and aahing over the view we took Diana and Graham to Ipswich where we met Del and Merle and went to the local Tavern for lunch. 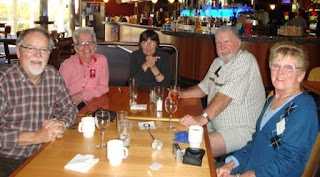 Tomorrow Diana and Graham head home to Tamworth in NSW. We will all get together again in April next year for some more talk about the good old days.
Posted by diane b