I can't believe it is 15 years since I had to put my dear old mum into a nursing home, and cleaned out her apartment and brought her stuff home. I had noticed a diary amongst her belongings which looked interesting and thought to myself I must retype her story when I'm retired and have time. Well the time has come and I'm finding the diary fascinating. My mum had senile dementia and paranoia and lived another five years in the nursing home. She died 10 years ago this year. She was tortured by her illness and it saddened me to see her like that but reading her diary has reminded me what a vibrant, lively, adventurous, tough woman she was.
She was born in Yorkshire England in 1912. She was the second youngest of eight children. At 18 she went to London to study nursing and met my dad, who was a truck driver. They married and had my brother and me. They endured six years of war torn London and four more years of rationing and 'doing without'. So they decided to find a better life by migrating to "sunny Australia, the land of milk and honey" as it was advertised. This is her diary of the voyage to Australia in 1949. 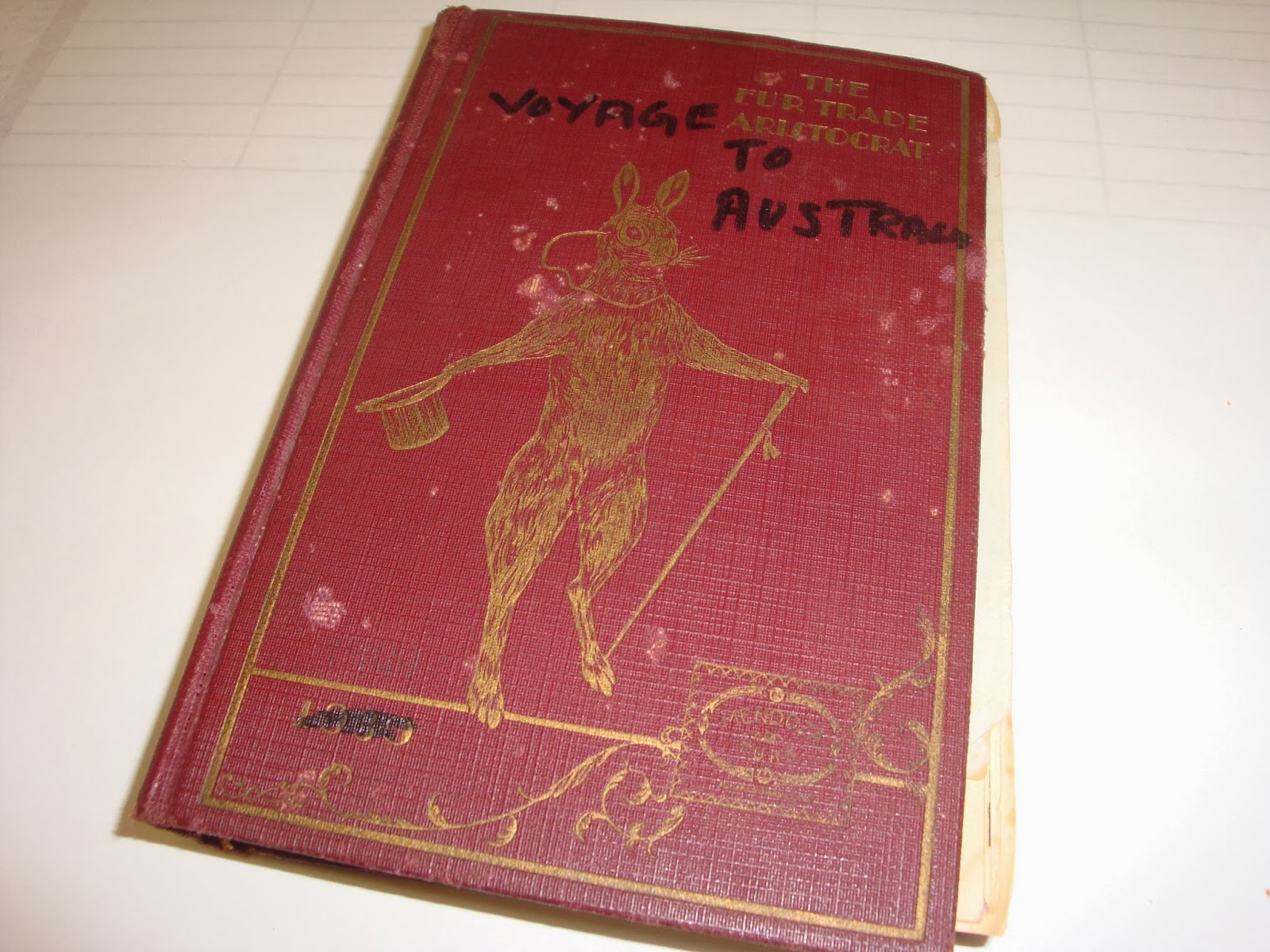 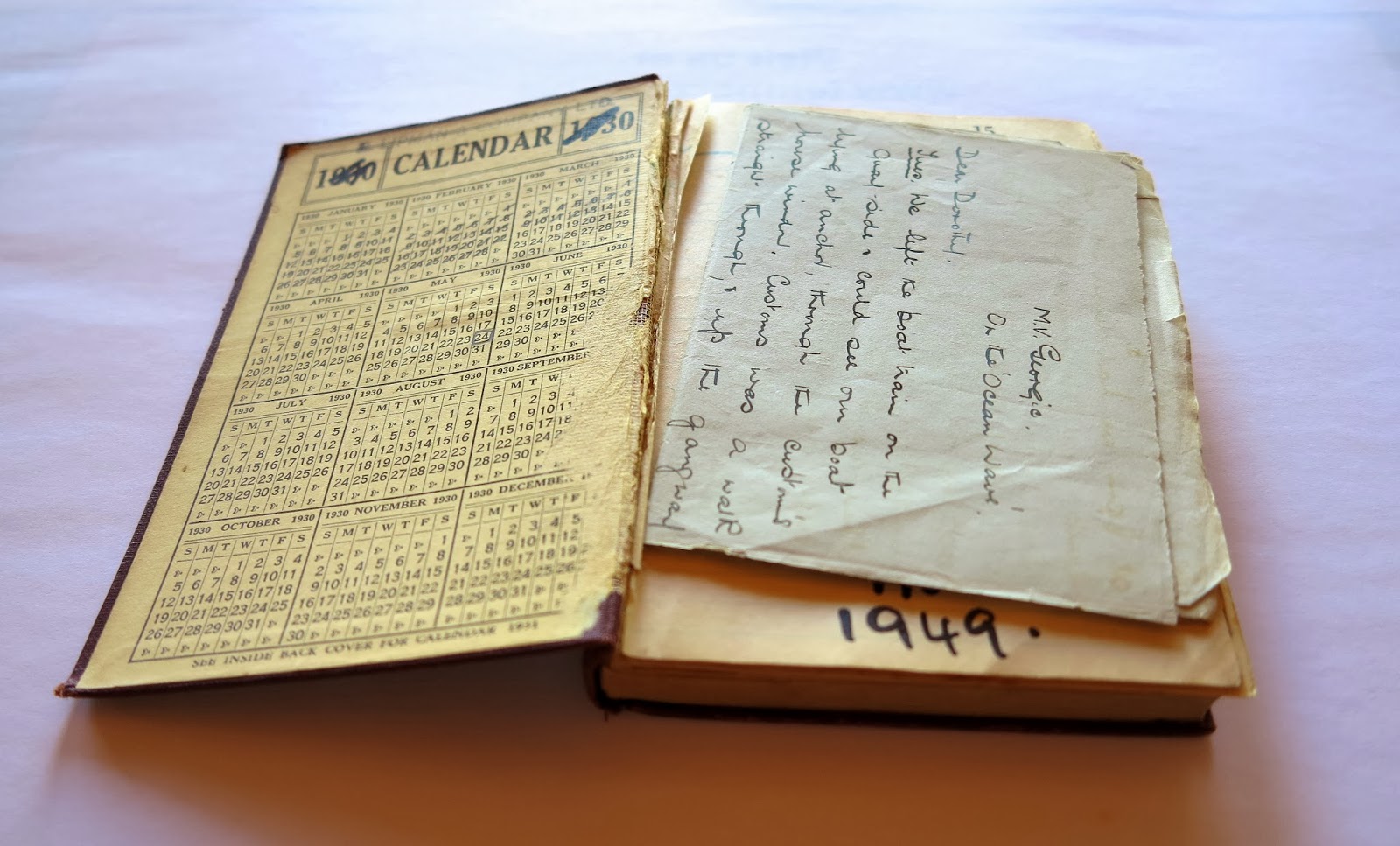 ......a 1930 calendar and a letter mum had started writing to her friend, Dorothy. It obviously never got sent because mum had decided to turn it into diary entries. It started on Tuesday but she didn't write the date. However ,when I was researching the ship we came on, I discovered it left on Tuesday 11 January 1949. She writes......... 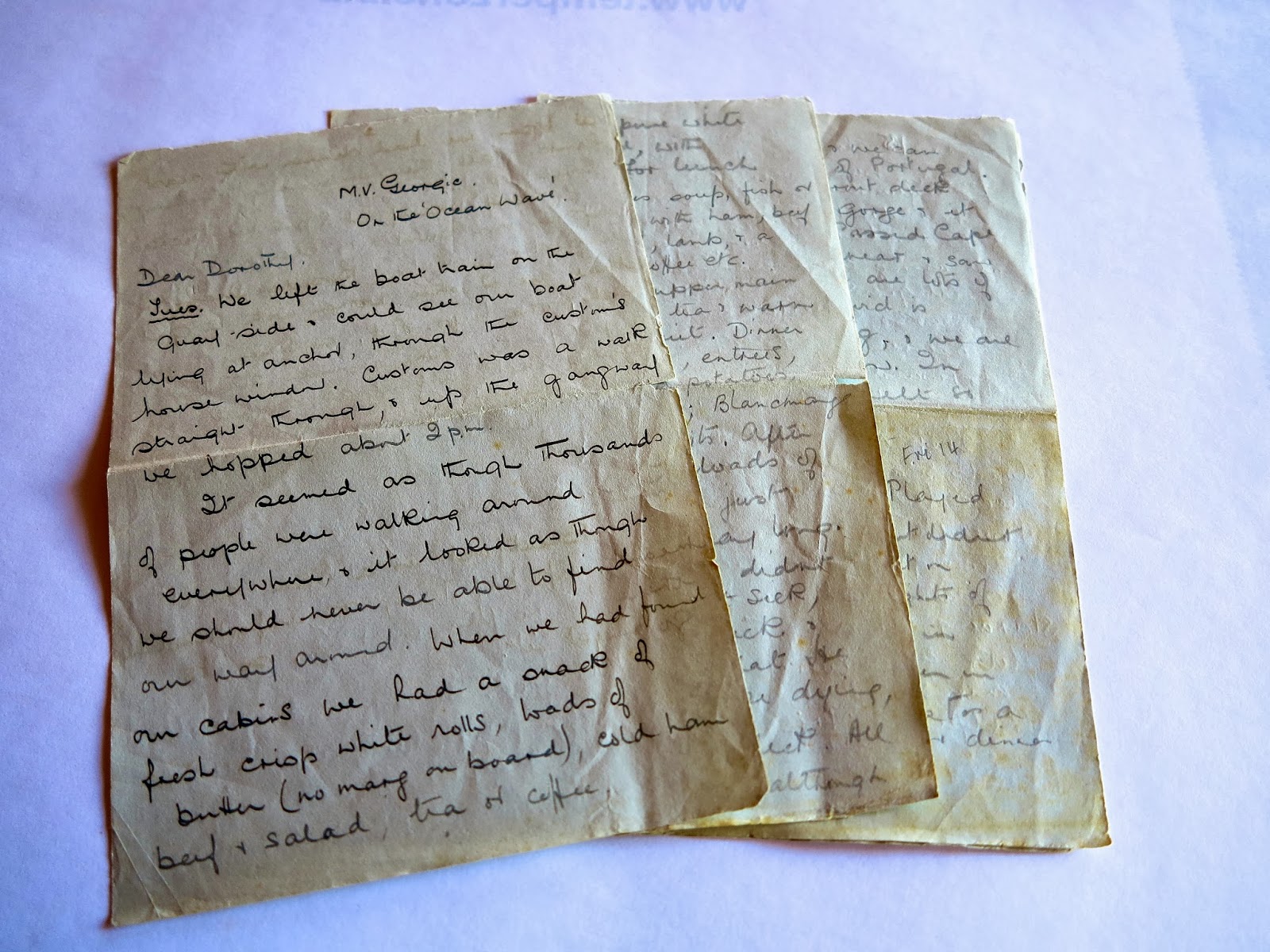 "We left the boat train on the Quay side and could see our boat lying at anchor, through the custom house window. Customs was a walk straight through, and up the gangway we hopped, at about 2 pm." 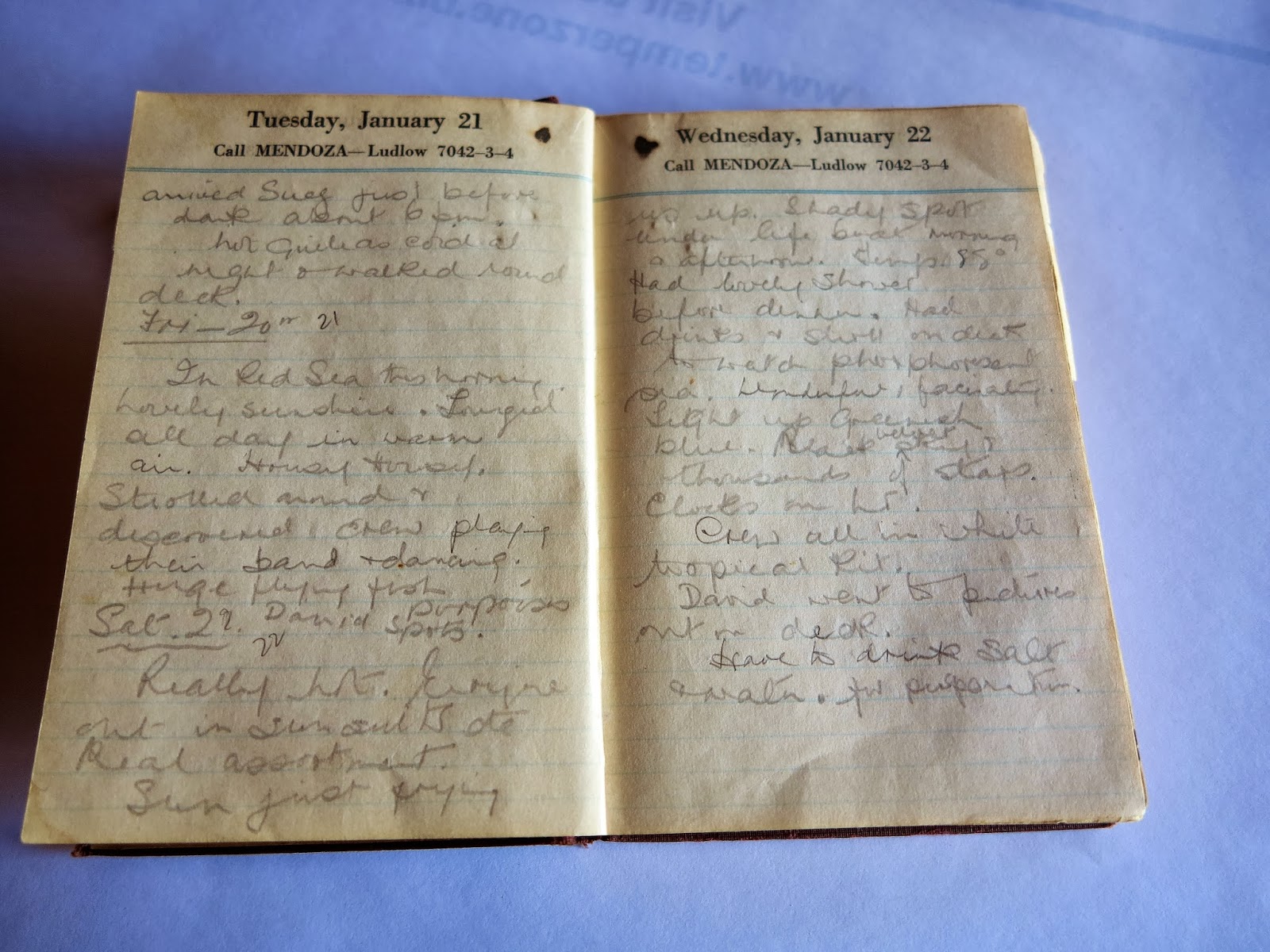 After a few entries she stops writing on the letter paper and continues in the old diary. She crossed out the diary dates and wrote her own in. Later she had crossed these out and put in new dates, but I found they didn't match with a 1949 calendar. Eventually after much puzzling I worked out that she had the days right but the date was one day behind. She mentioned she found it hard to keep track of the days as they often had to put the clock ahead an hour. 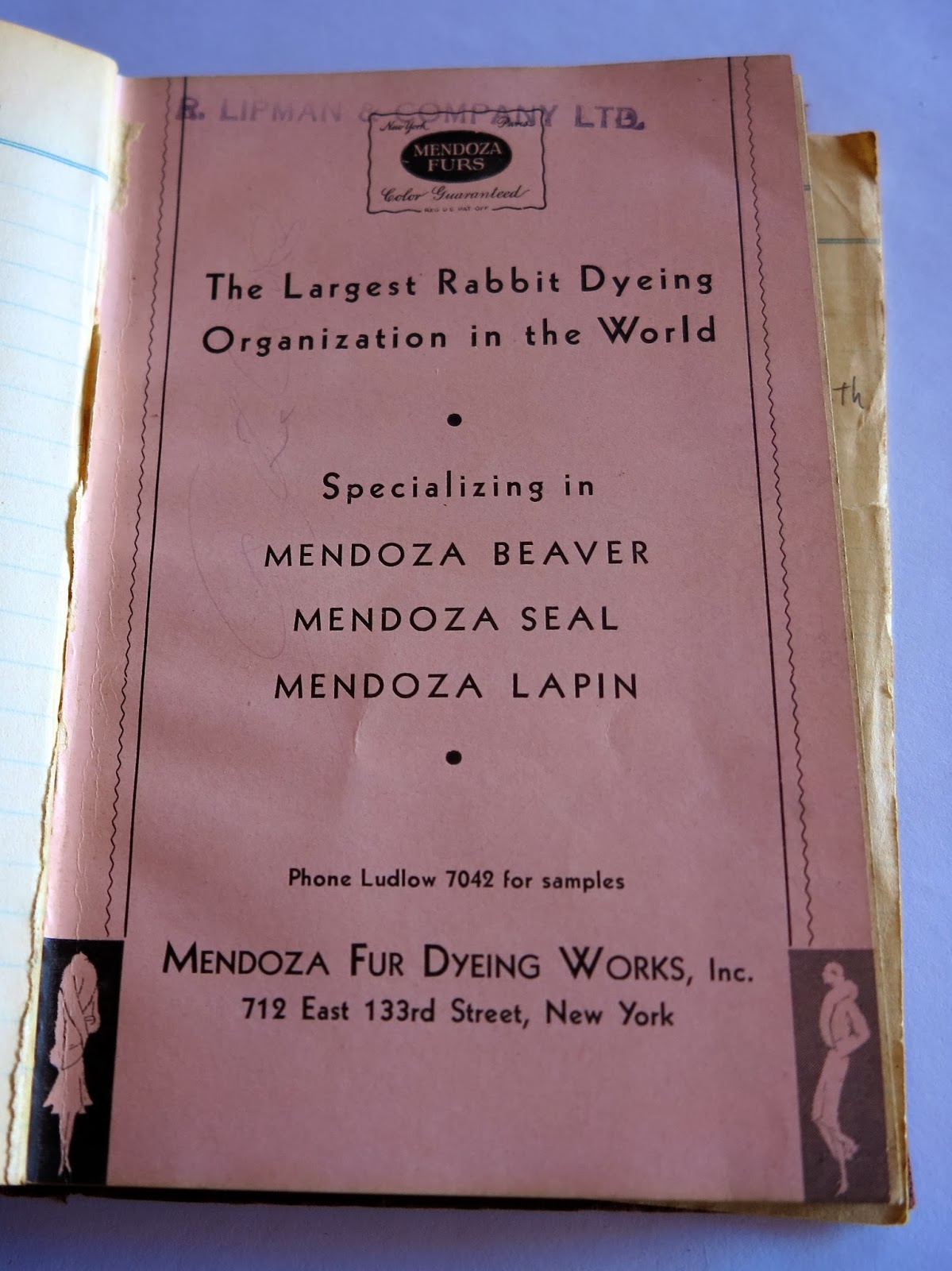 I flipped through the diary and found these interesting ads. 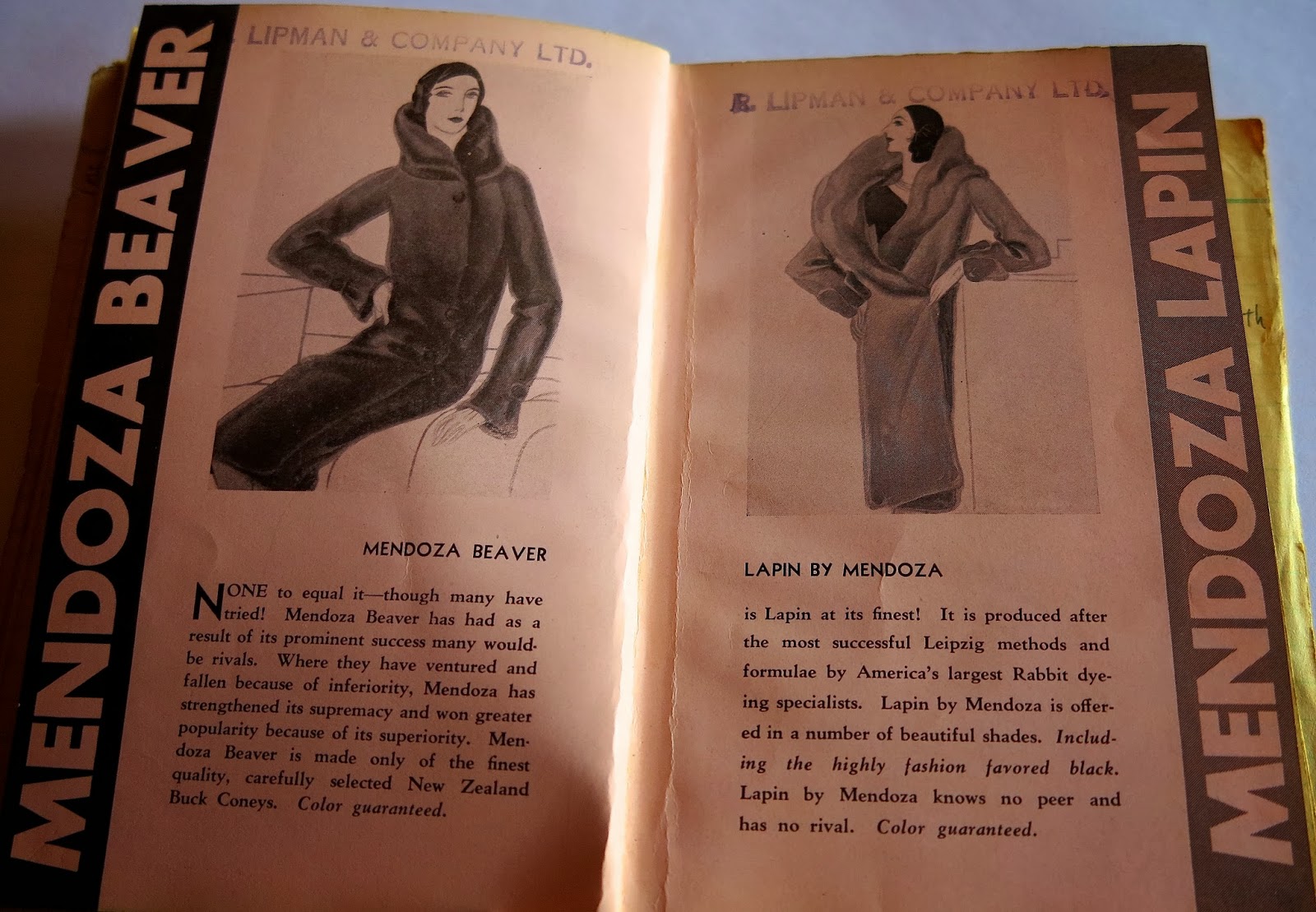 So the Diary was a business diary for "Mendoza Fur Dyeing Works." Mendoza Beaver is made from "carefully selected New Zealand Buck Coneys." I had no idea what they were, so I googled and found out it is a male rabbit. 'Lapin by Mendoza' is also a bunny it is also the language spoken by the rabbits in "Watershed Down". 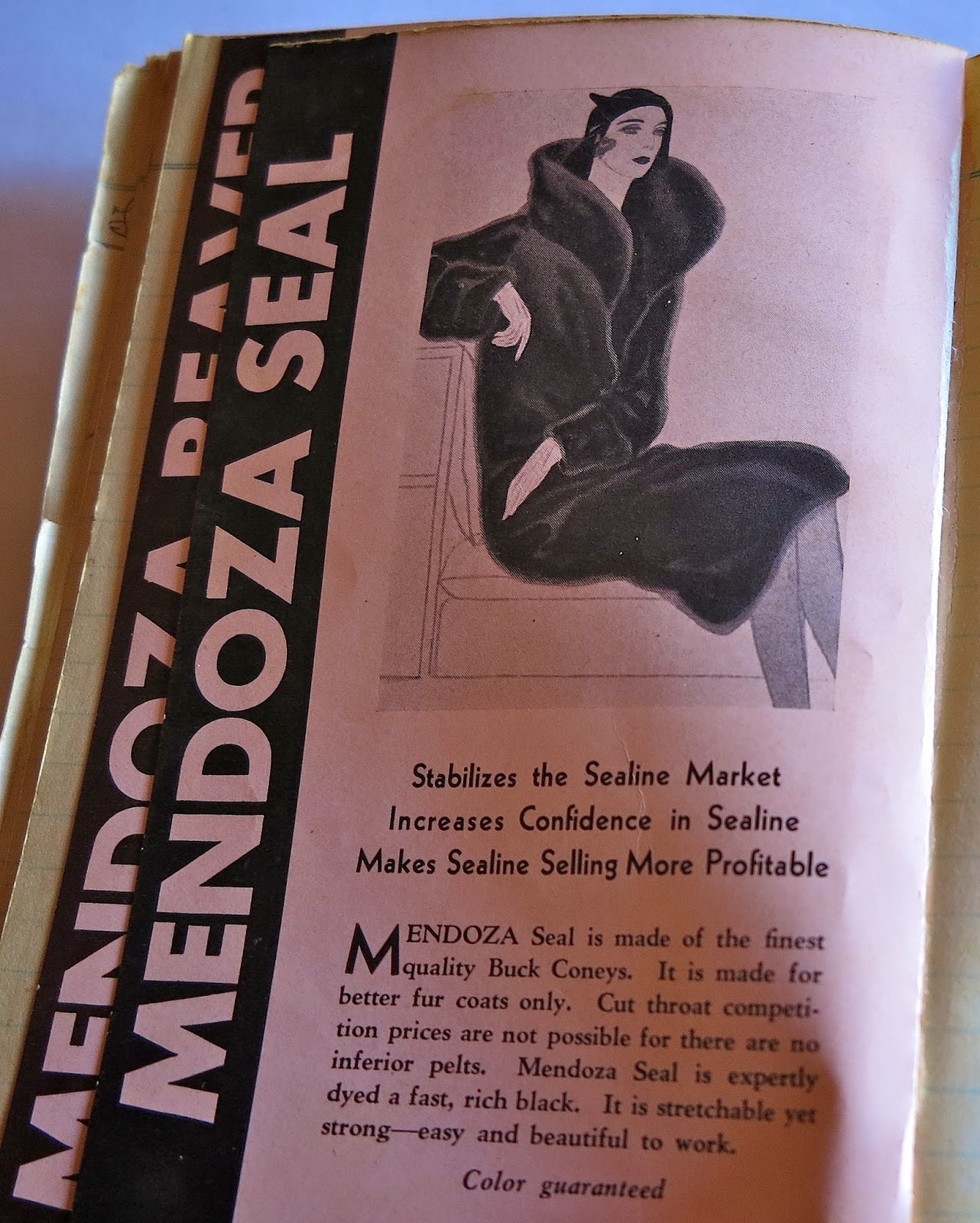 Then we have the Seal fur which is made from the finest quality Buck Coneys. (Doesn't it sound awful today?) I still wonder how my mum got this book. There is no way she could afford a fur coat then. Anyway on with her writing...........
"It seemed as though thousands of people were walking around everywhere, and it looked as though we should never find our way around. When we had found our cabins we had a snack of fresh, crisp white rolls, loads of butter (no margarine on board), cold ham, beef and salad, tea or coffee.
At 6 pm we had dinner with roast lamb and all the trimmings.'Lovely grub.'
Very weary at 8pm, we tucked up in our bunks to sleep without unpacking much. Besides Diane and I there are 2 other women with a girl each, one 6 years old, so Diane has a playmate. One woman started being sick almost as soon as the boat moved, so I thought not so good. The beds are lovely and comfy and I slept well." 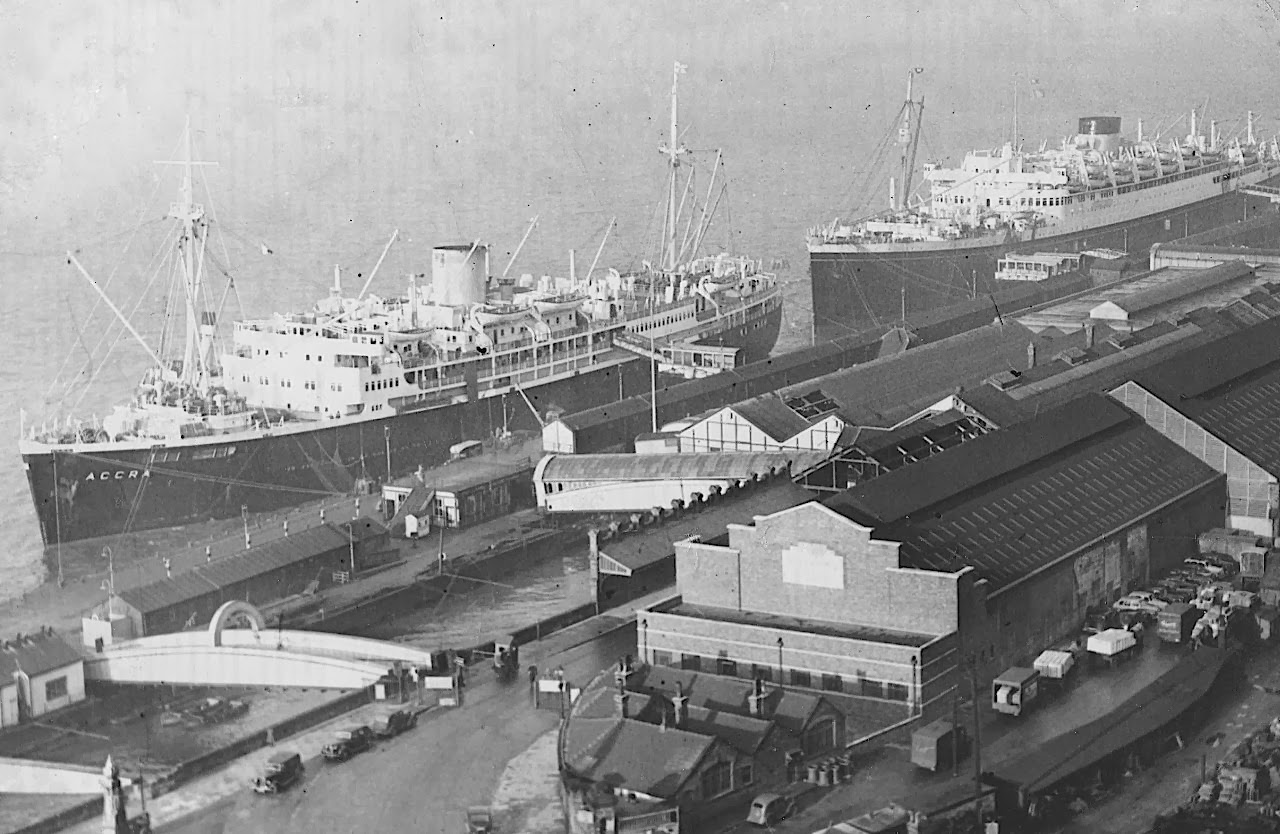 Printed on the back of this photo is: "GEORGIC" Alongside Princes Landing on Tuesday 11th January 1949, immediately prior to sailing with over 2,000 emigrants for Australia. (The Georgic is the ship at the back. The dock was in Liverpool)
(My mother didn’t explain that families didn’t have a cabin of their own. All the women and young children were on the upper decks with 6 to a cabin and the men and older boys were on the lower decks. So my brother and father were separated from my mother and me for the 5 week journey. However we spent a lot of time on the deck together.)

Linked to Sepia Saturday
Posted by diane b