TIME TO SETTLE DOWN

Bill and I arrived back in Australia after spending 1970 romping around the world. We came back from Europe  by ship with our car in the hold. On board we had made friends with a Swiss couple, who were migrating to Sydney. However, Bill talked them into coming to Brisbane with us. At first they were accommodated in a migrant camp in Sydney while Bill and I stayed with my parents.

Even though Bill was promised a job in Brisbane we were short on funds to get there so we sold our nice new car, which was a model not available in Australia. We bought a second hand one and a trailer and loaded our belongings together with our Swiss friends, Silvia and Rene and off we drove to Brisbane. We had a block of land there and we decided it was time to settle down. 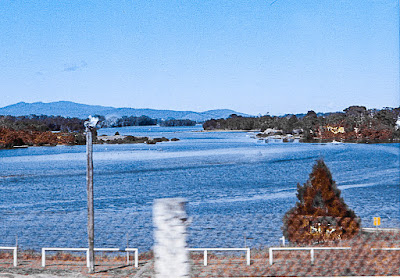 When we set off the weather was fine as we crossed over the Hawkesbury River. 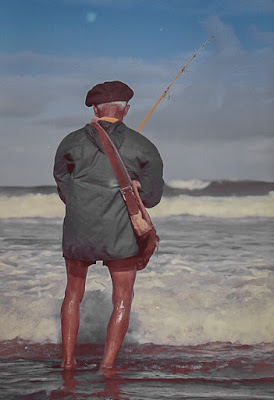 We showed Silvia and Rene our beautiful beaches on the NSW coast. I couldn't resist a photo of the old fisherman. Then it started to rain. Our trailer, full of belongings was covered with a tarpaulin but the water ran into the trailer and our stuff got wet.

When we arrived in Brisbane we found two flats  in the same old building in Red Hill. They were under the house like a basement. We hung all our wet blankets, sheets, towels and everything all around the flat to dry because it was still raining. 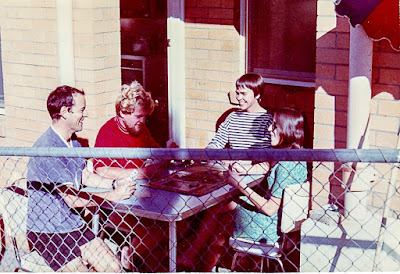 We spent the first week helping Rene and Silvia find jobs. (They were easy to find in the seventies) I applied to the education department but the reply was that they didn't need married women. Bill had a job waiting for him with Carrier Airconditioning. We spent some free time playing Jass, a Swiss card game. 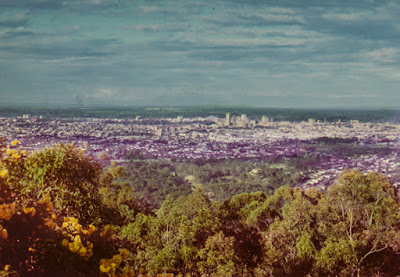 The view of Brisbane from Mt Coot-tha in 1971. We were living in Red Hill on the right of the photo but we were going to build a house in a new suburb called Springwood, which is way in the distance to the south of Brisbane in the bush.
Posted by diane b

Email ThisBlogThis!Share to TwitterShare to FacebookShare to Pinterest
Labels: 1971, My Story