Continuing the story from last post where my boyfriend of three years dumped me and a new friend smashed up my car:

My girlfriend, Kerrie, who I had been friends with since we were seven, had come to PNG to work. She was still trying to find me a new boyfriend. She didn't like to see me staying home on the weekends just reading or playing sport. She was more outgoing than I was and met boys at the local RSL Club (Returned Servicemen's Club).

One day she said, "I have met three nice boys at the club, you must come and meet them, I'm sure you would like one of them. They are from Switzerland and they are gentlemen. Now she had me interested even though I wasn't that keen on going to the club as I didn't drink. So the next Saturday night I went to the club with Kerrie and was to meet the three boys, Willy, Werner and Willy (called Bill to distinguish between the two boys with the same name). However, Bill didn't turn up because his company had sent him to the other side of New Guinea to do a job for a few weeks. Kerry fancied Willy, so I was left with Werner. He was a good looking young man and enjoyed dancing which I liked too. But there was something about him I wasn't sure about. He was a bit over confident and self assured. After my recent hurtful experiences with men, I was very unsure of this guy. However, in a group he was okay.

We got talking and one thing led to another and I found myself telling them the story of my car being smashed up by a (married) soldier I had trusted. He promised to have the car fixed by the army mechanics but it had been in their workshop for months and nothing done. The two Swiss boys were shocked to hear the story and said they would sort it out. The next day they went to the barracks, found the guy and I don't know how they did it, but there may have been some threatening going on, and the next thing I know they had my car towed out of the barracks and given to a local car repair garage to be fixed. I started to like these guys very much.
I went to a few parties and beach picnics with them but I still couldn't relax with Werner so I stopped going out with them and back to my books and sport.

Willy, Werner and Bill were all electricians from Switzerland working for Carrier Air Conditioning. They were sent all over Papua/New Guinea to install industrial air-conditioning. When Bill returned from his job, Kerrie once again insisted that I would "really" like this guy. At the same time Willy was telling Bill, that Kerrie had a girlfriend that he would "really" like. Employees of Carrier Air were having a party and Bill and I were invited both knowing we were "really" going to like each other even though we had never met.

Needless to say our friends were right and we did "really" like each other. But was it going to end in heartbreak again? 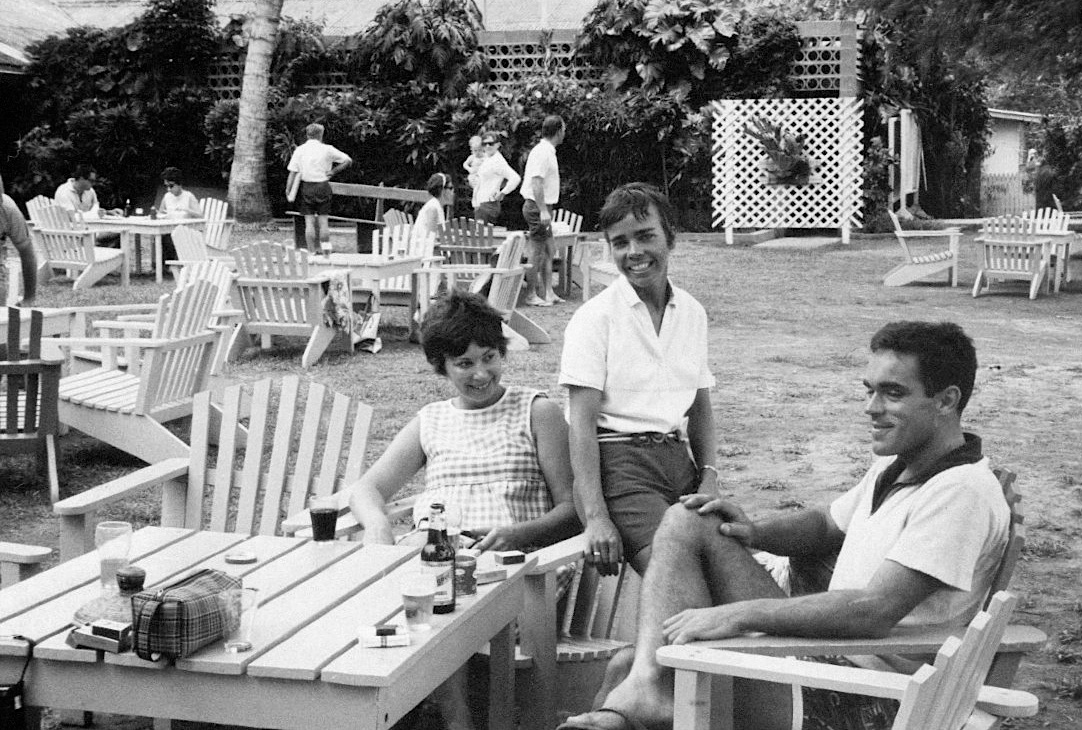 Kerrie and Willy introduce me to Bill. We spent Saturday mornings in the beer garden of the RSL Club overlooking Ela Beach. 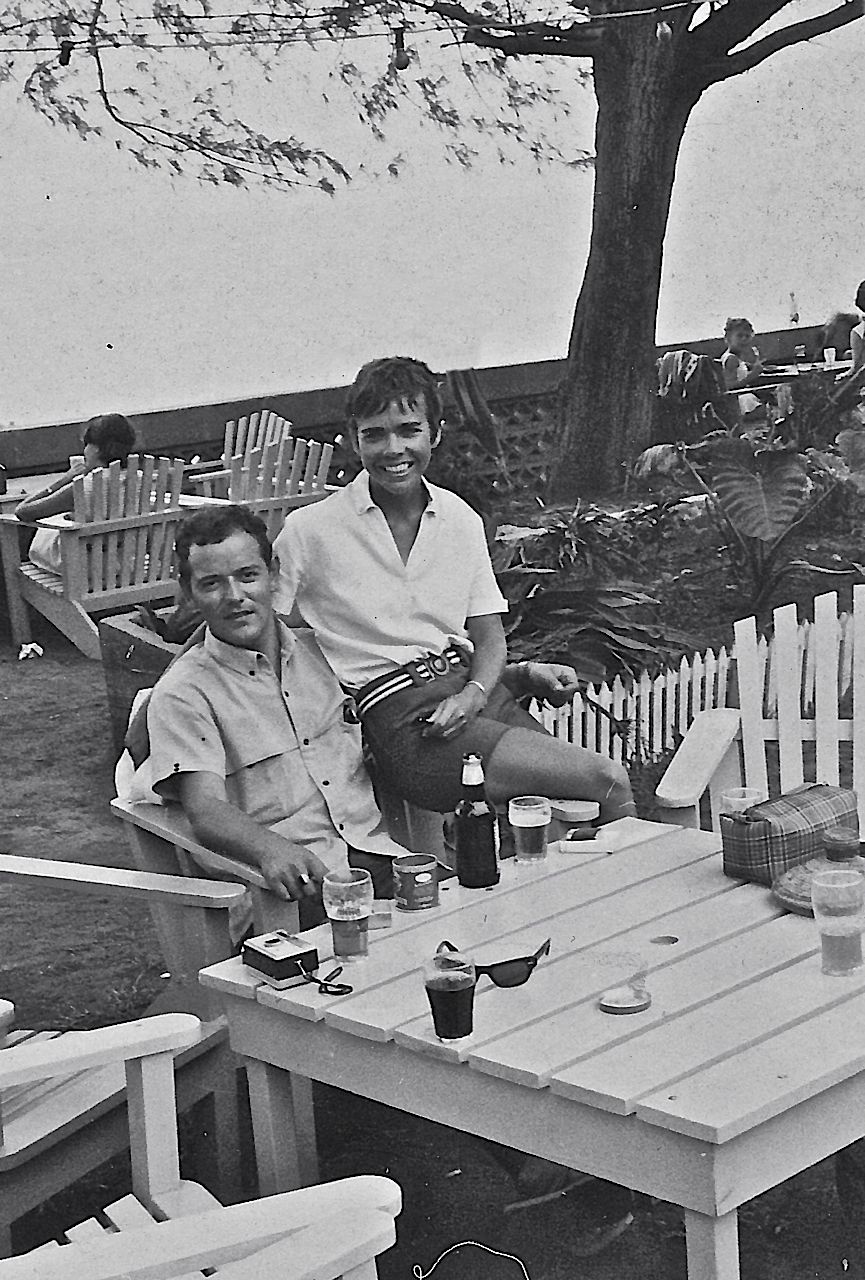 We "really" liked each other. 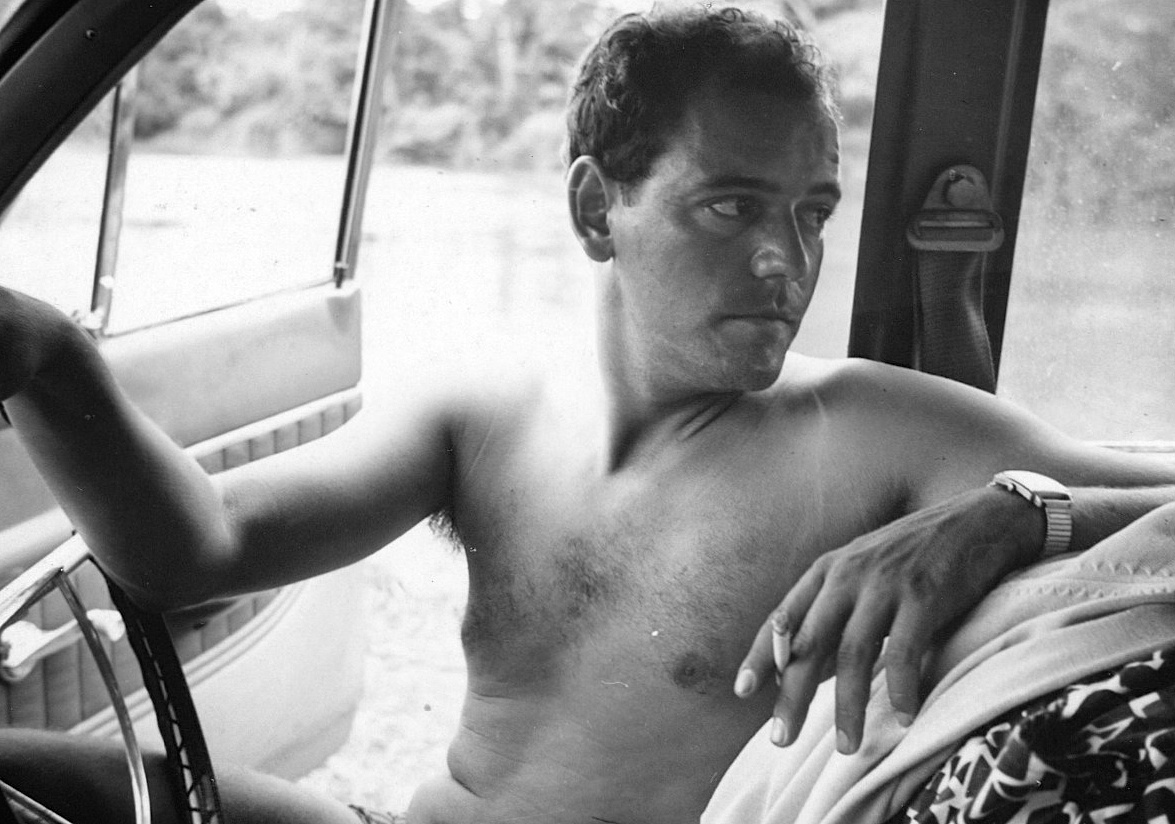 Bill had a Ford Falcon and we used to go on picnics with other couples from Carrier Air. 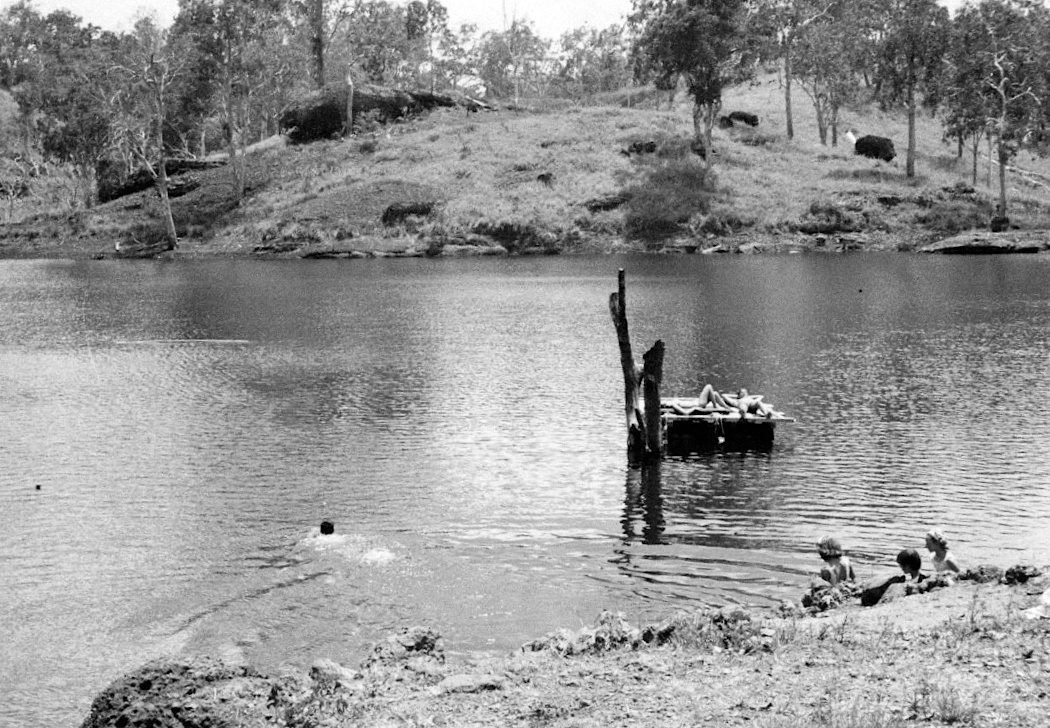 We went swimming in Sirinumu Dam. 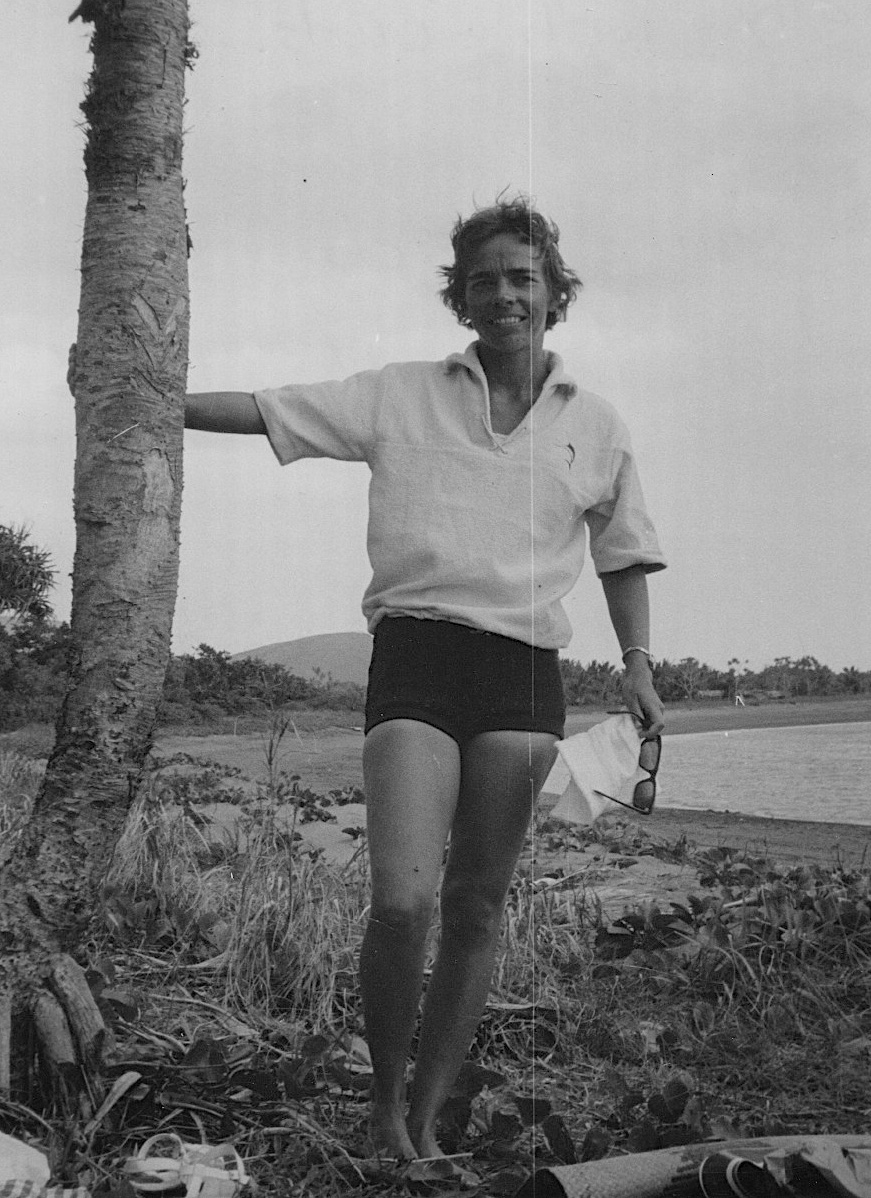 We went to Guire Beach where the sand was volcanic black. 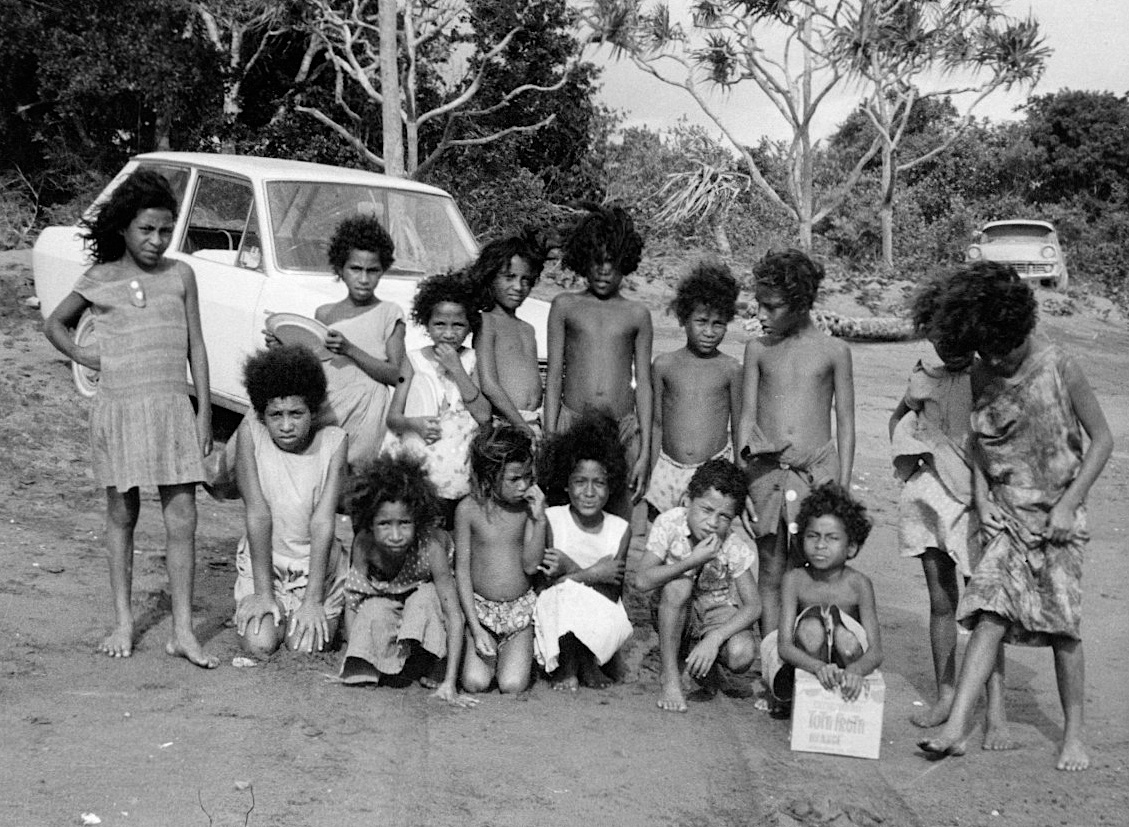 We would share our barbequed sausages with the local children. 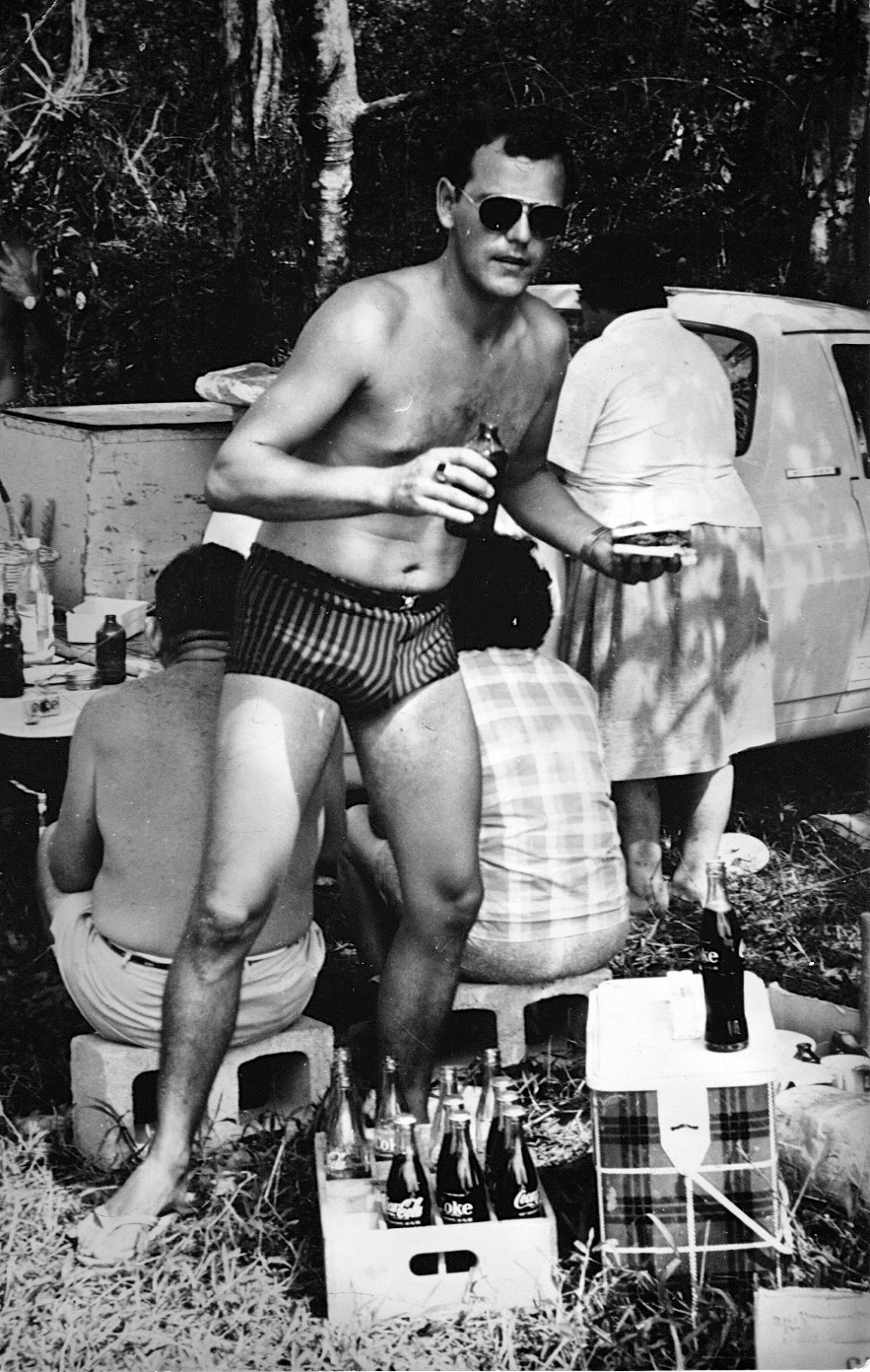 We went to Lalokie River for a swim and picnic. Bill has his steak sandwich and stubby beer. 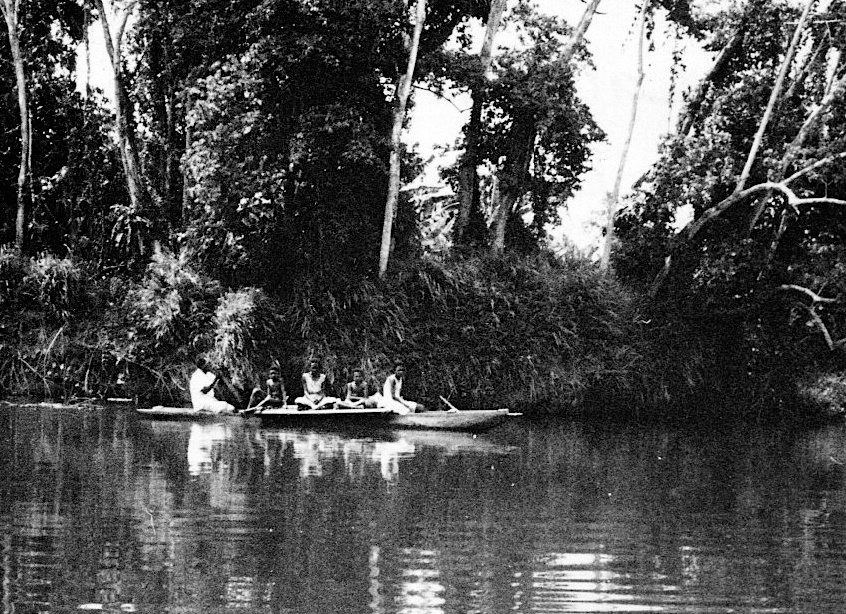 Local natives in their dug out lacatoi canoe. 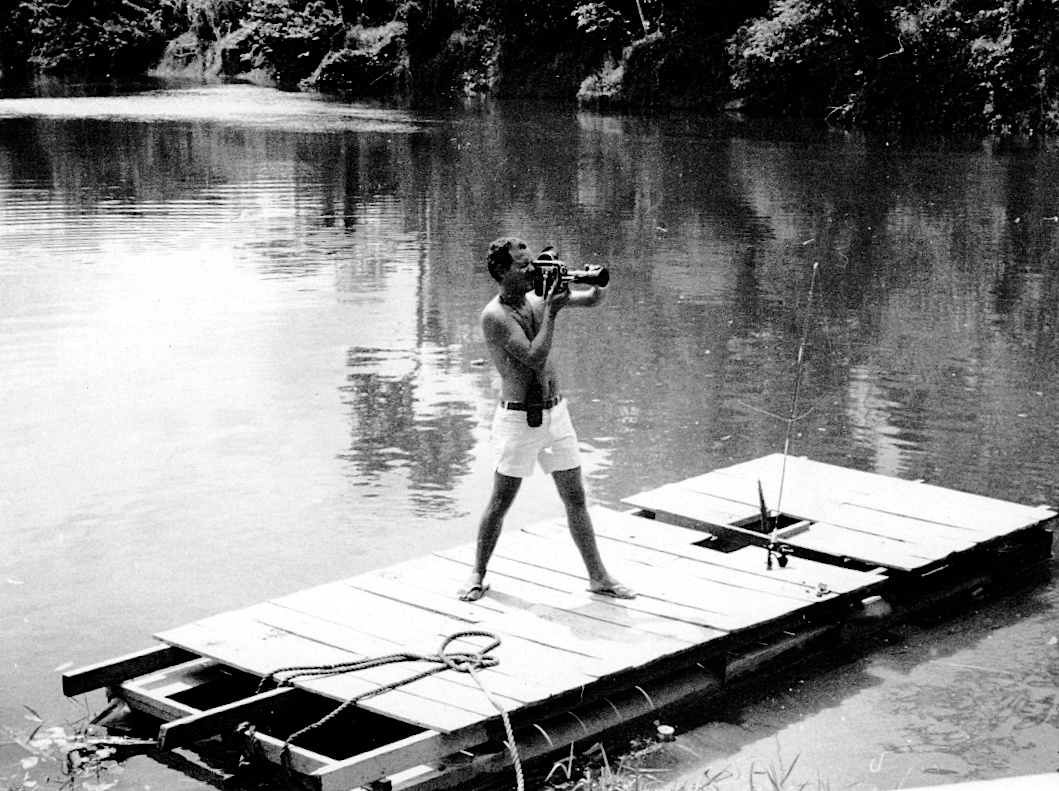 Bill was keen on photography especially movies. He had a Bolex professional 16 mm camera. I was impressed. 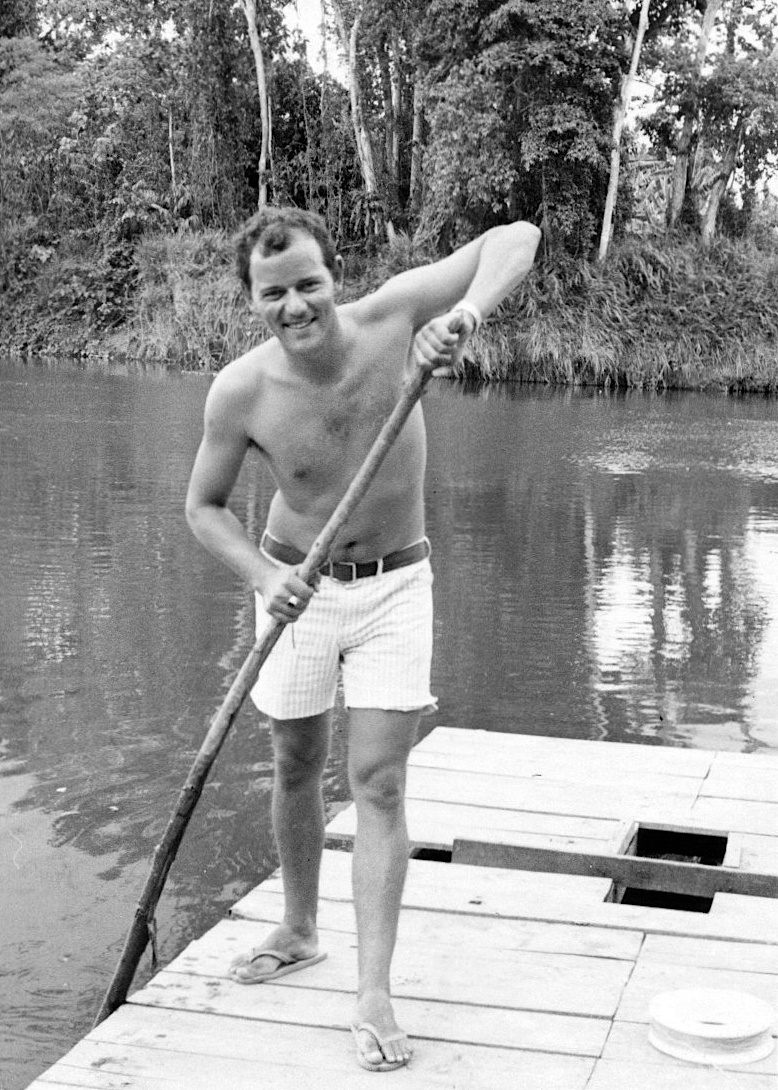 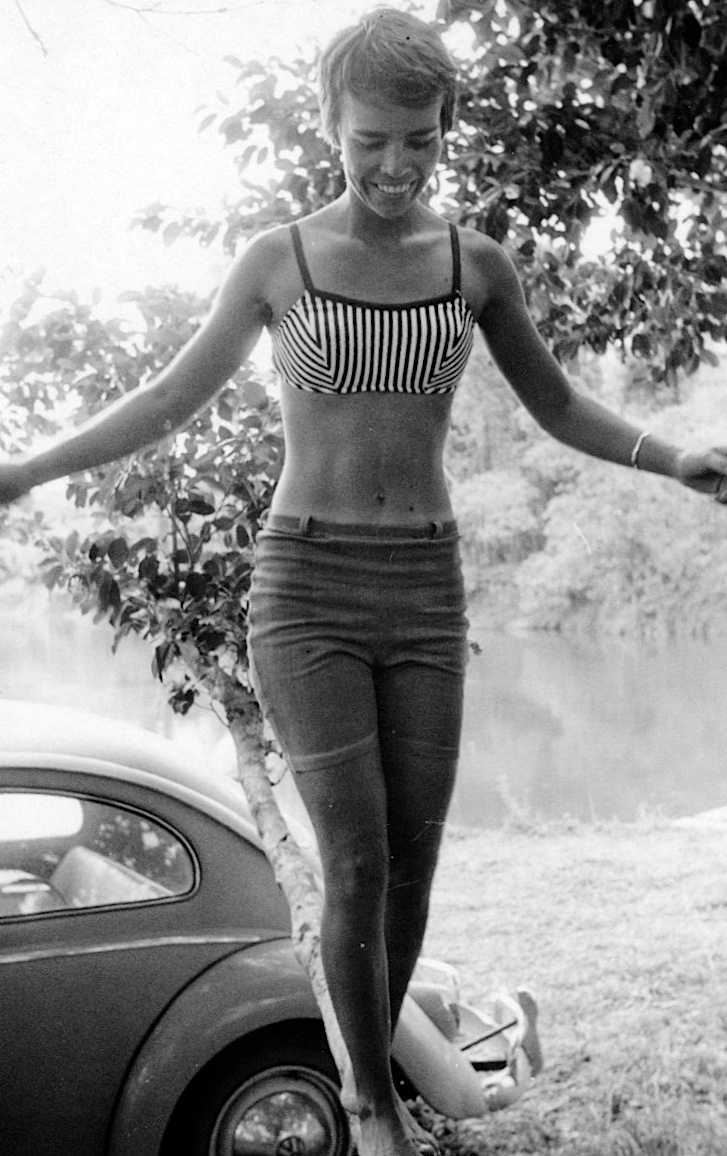 Bill paddling what they called the "Carrier Queen". I thought he was cute. He thought I was cute.
(Oh boy to have a figure like that today, I wish). 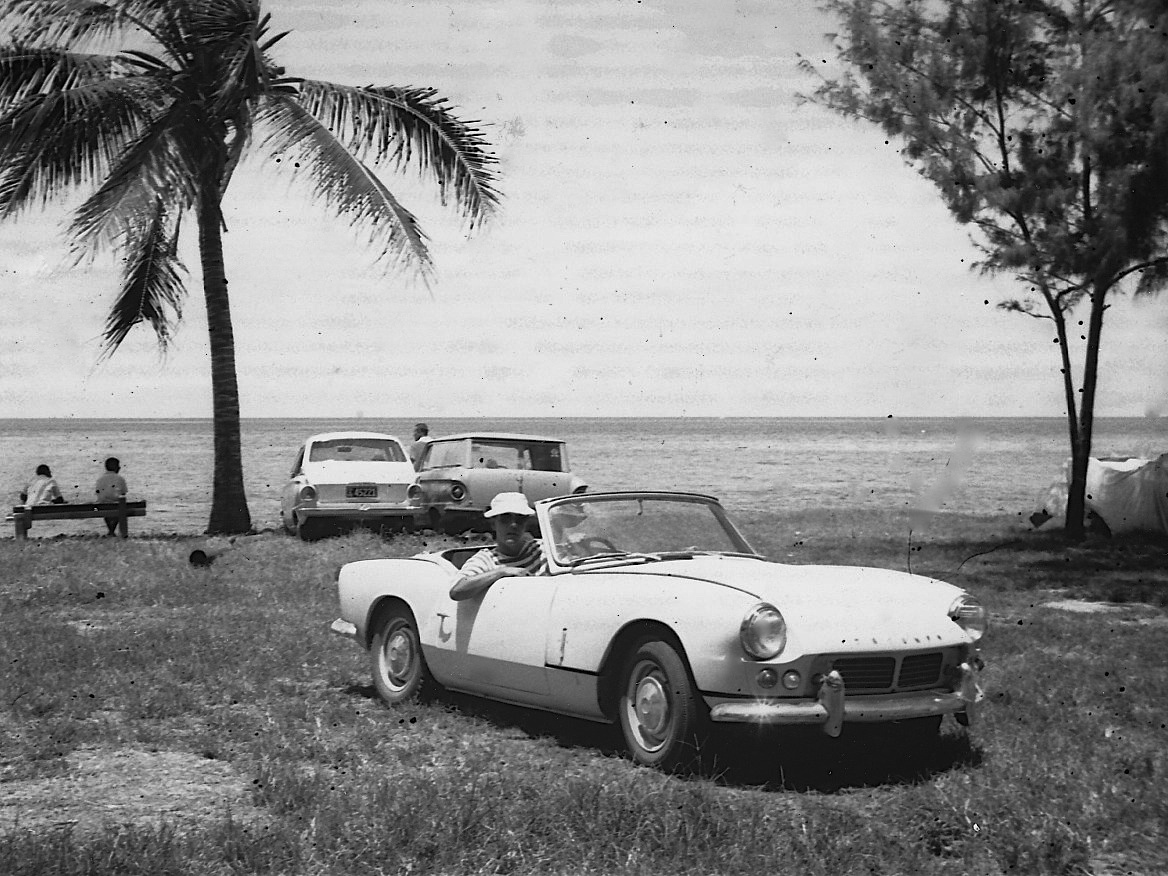 At last my car was fixed after seven months without it. Bill liked it too. 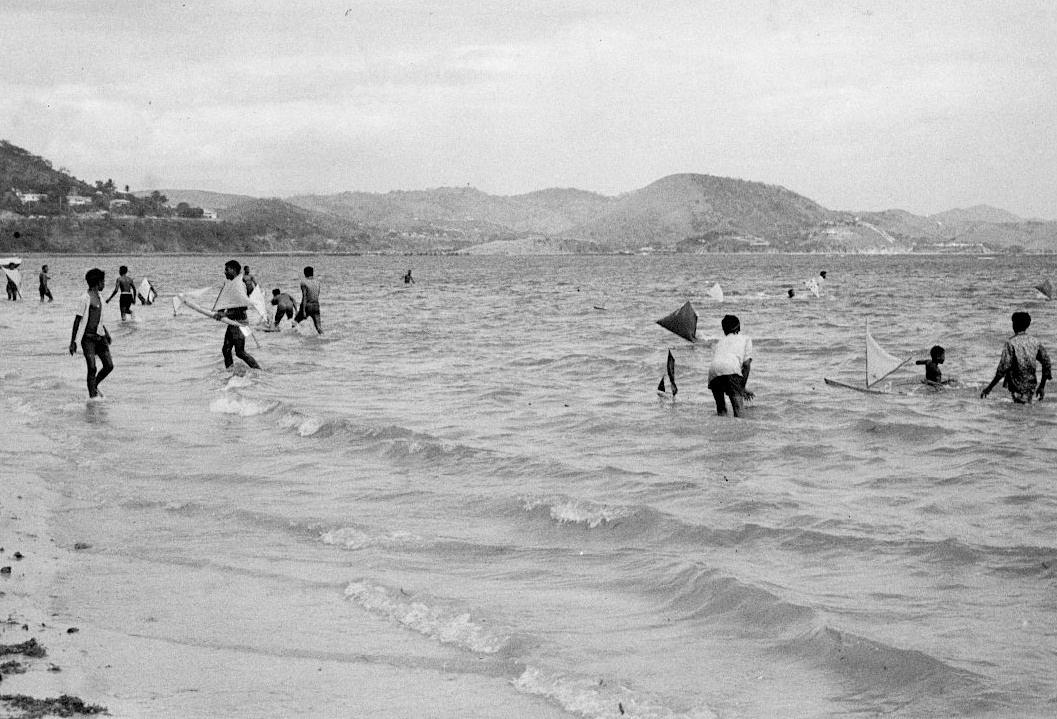 We drove to Ela Beach to watch the locals have model lacatoi canoe races. 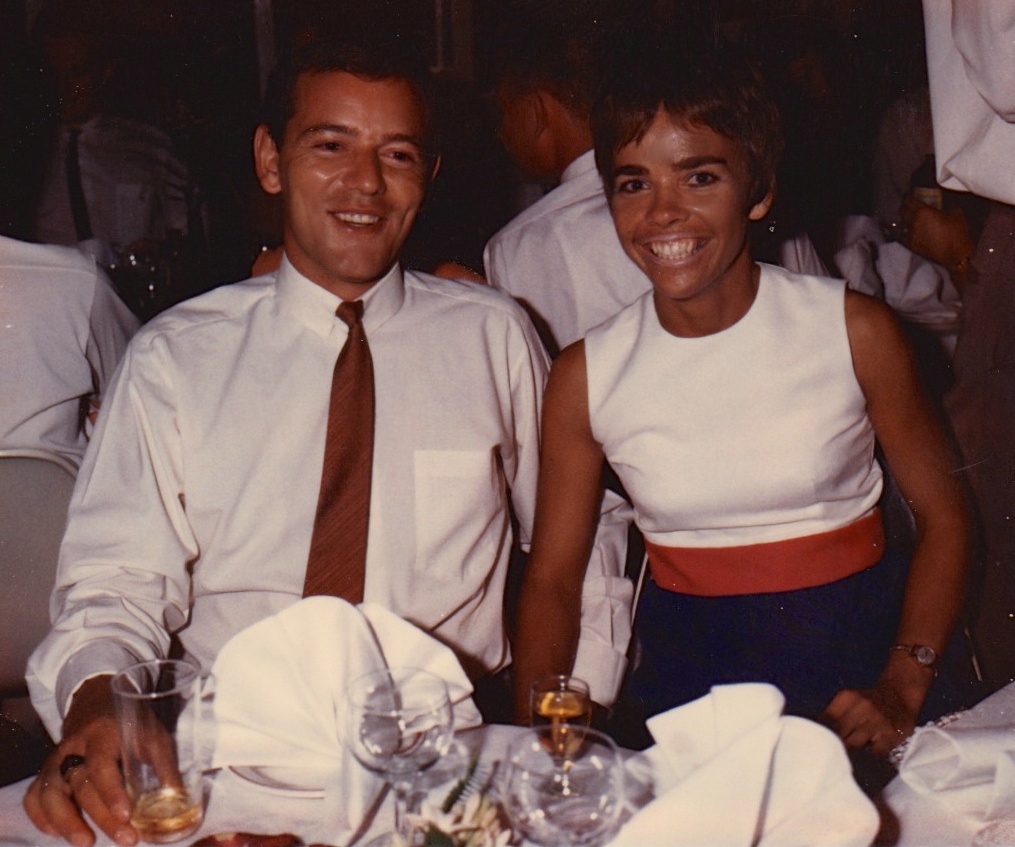 At the end of the year (1968) I proudly took my new boyfriend to the Korobosea School Staff Christmas Party. (One got a good sun tan in the tropics.)
I was happy but would it last??
Posted by diane b

Email ThisBlogThis!Share to TwitterShare to FacebookShare to Pinterest
Labels: My Story, TPNG 1968