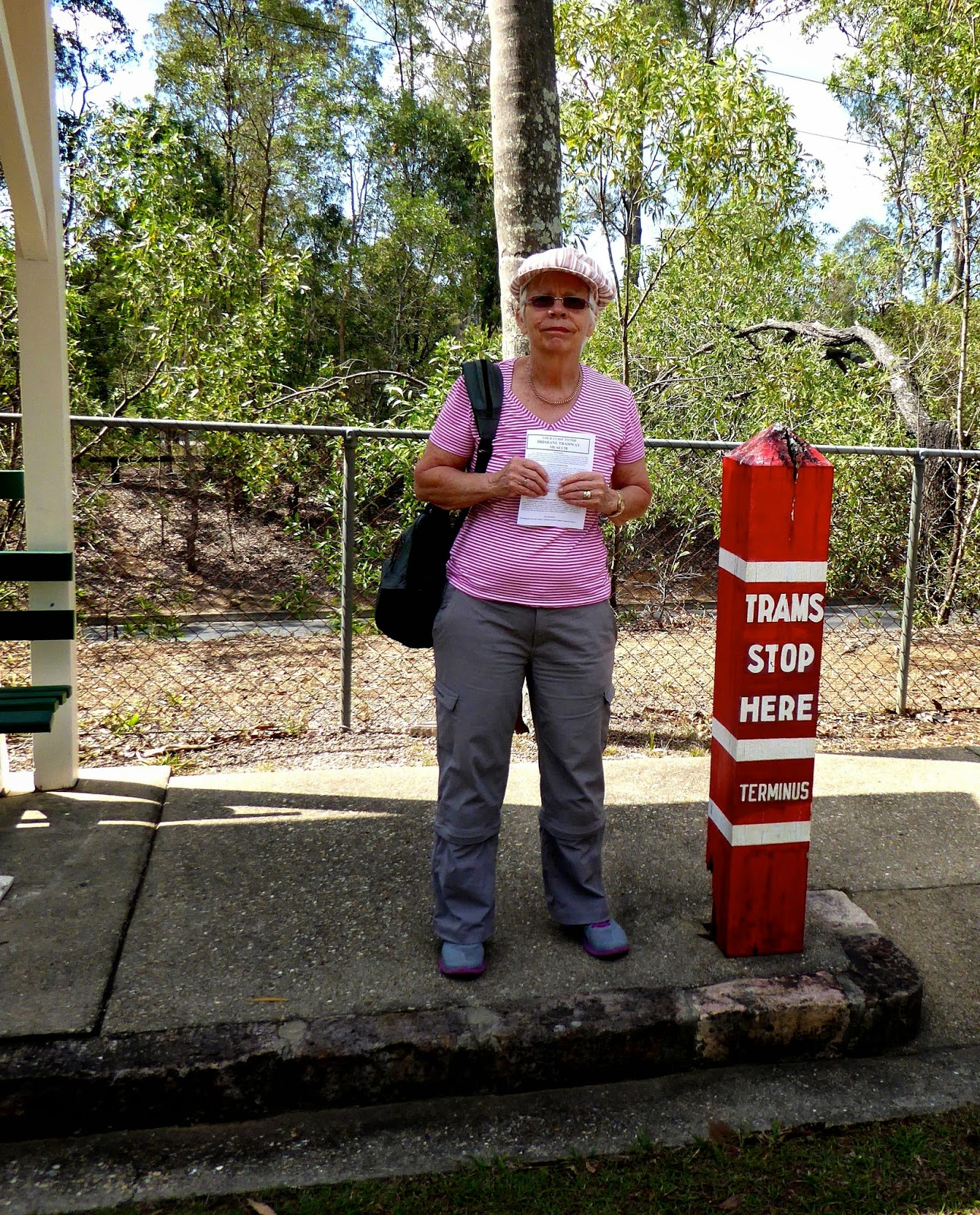 Motivated by our visit to the Sydney Tram museum a few weeks ago we decided to visit the Brisbane Tramway Museum in Ferny Grove on the other side of the city. It was a beautiful Spring day and the weekend traffic was light through the city. The museum is quite small and only open on Sundays. However, they have quite a few renovated trams that are operational just like they were many years ago. Trams stopped running in Brisbane1969. I didn't live in Brisbane before 1971 so I had never travelled on a Brisbane tram but TOH did and he was thrilled to ride on them again and remember.
We bought tickets and looked around the static display in the small building. Then we saw the tramstop with its original signs and went to wait for a tram. 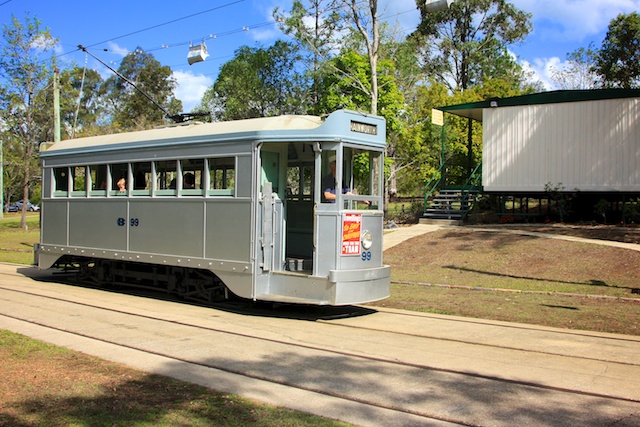 Soon this one arrived. It was built in 1945. There was a driver and a conductor operating the tram. 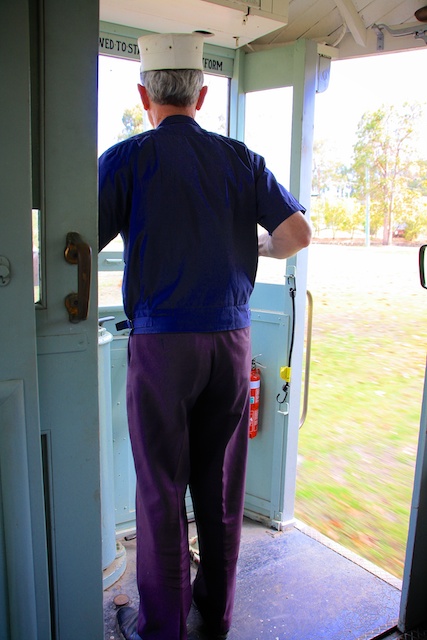 All the people working at the museum are volunteers.
The driver stands to operate the controls. He took us for a short ride through the property. It was fun rattling along the track. 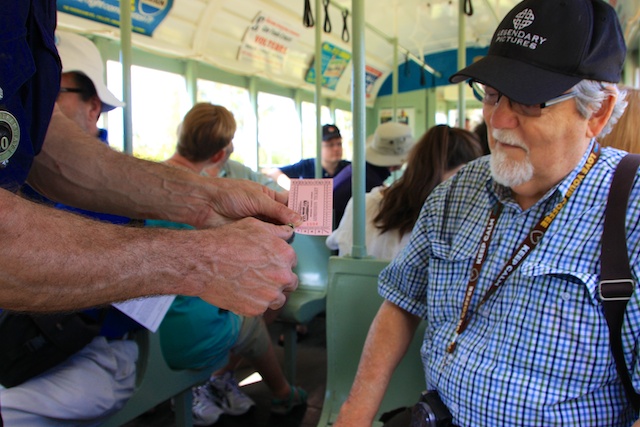 The conductor punches TOH's ticket just like in the old days. 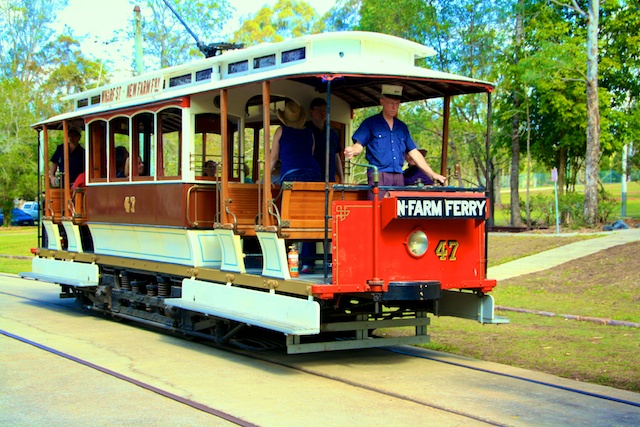 A little later another old tram came along the track. This one was built in 1907 and has been lovingly restored by volunteers. 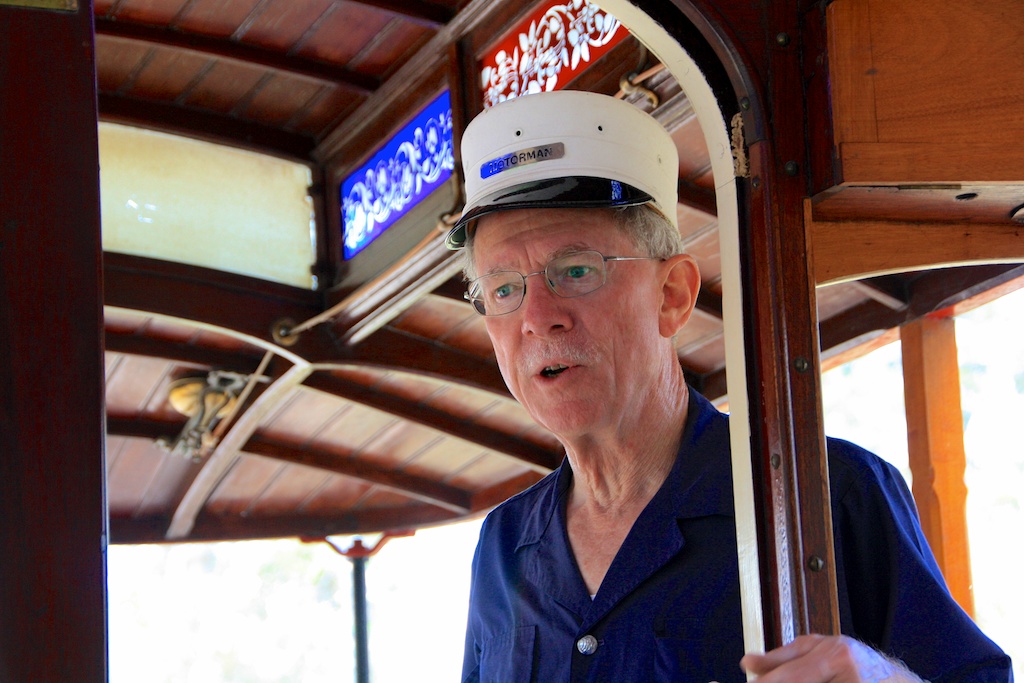 The driver tells us the history of the tram and explains that the coloured glass windows are originals but from different trams. The lights for night time were kerosine lamps. 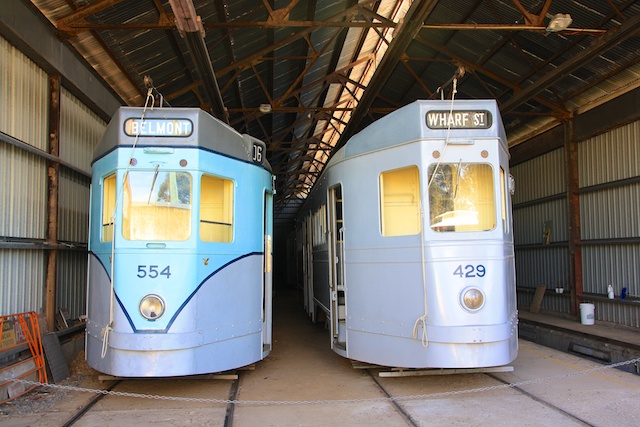 We alighted at the depot where other trams were being restored. 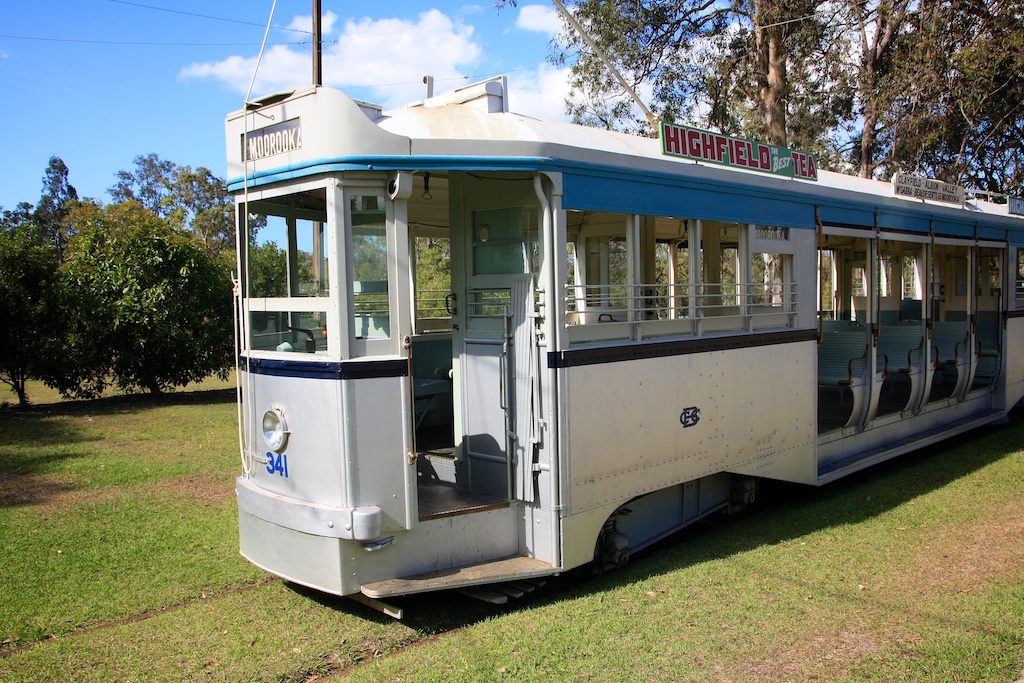 But the one outside the depot caught TOH's attention. "That's the one I used to go to work on," he says excitedly. 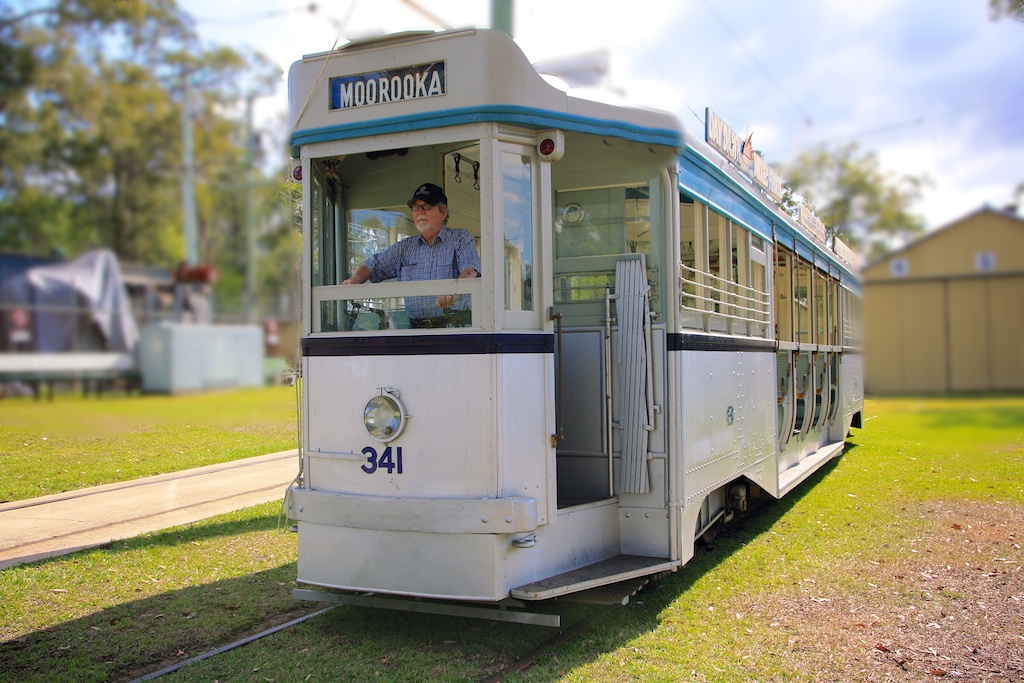 He enjoyed walking through the car and pretending to drive but then he told me one of his not so nice memories. On Friday afternoons after work, the boys would go to the hotel for a drink or two or three or more. TOH wasn't used to the Australian strong beer. He had only just arrived from Switzerland back then. 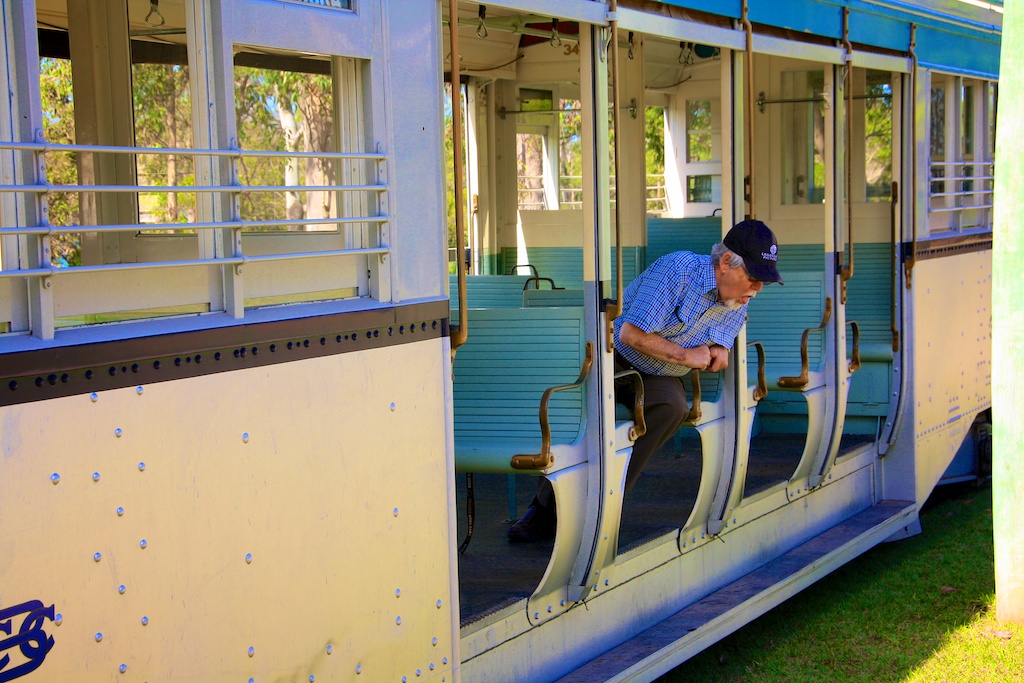 On the way home from the hotel, he started to feel unwell and had to lean out of the tram and throw up. I even got a demo. 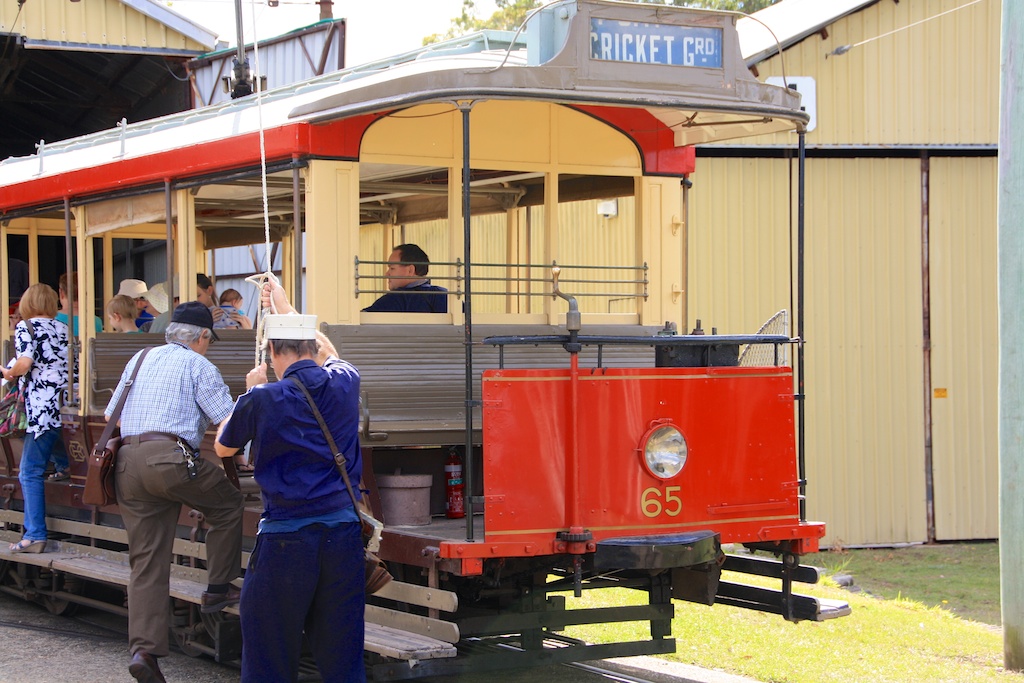 Soon the old tram arrived at the depot to take us back to the start of the track. The conductor has to change the direction of the pole that runs along the electric wires and the driver changes ends of the car. TOH was enjoying himself as much as the other kids on the tram. 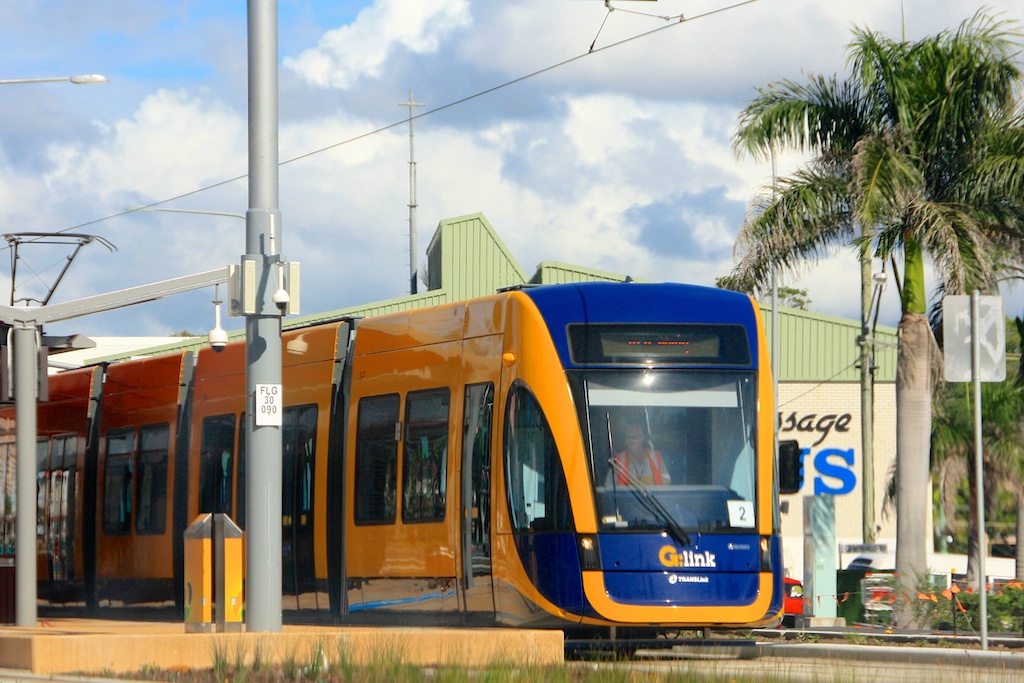 There was a bit of controversy about the trams being installed but I think it is a great idea. The tourists and uni students will find them a boon.