COME FLY WITH ME

During our six day tour of outback Queensland, we visited the Qantas Founders Museum at Longreach. Now you may be wondering why a Qantas museum is way out in Western Queensland. Well Qantas, our national airline, was started by two friends, Hudson Fysh and Paul McGinness, who were veterans of the First World War and members of the Australian Flying Corp. After the war in 1919 they wanted to compete in the England to Australia air race but they couldn't raise the money after the millionaire grazier who was going to finance them died. However, they accepted an assignment to survey the air race route from Longreach in QLD to Katherine in NT. It took them 51 days to travel the 2179k over the harsh outback country where cars had never been before. It was during this trip that the young men realised how beneficial it would be for mail, goods and passengers to travel by air in these sparsely populated and roadless areas.

So Fysh and McGinness sought financial backing for an air service. Graziers were sympathetic knowing how hard it was to travel in the outback with no roads, no bridges and thick cloying mud when it rained.

In 1920 Fergus McMaster, a wealthy grazier, invested in them. With their former flight sergeant, Arthur Baird, as their mechanic they bought a plane and started the Queensland and Northern Territory Aerial Services, which was quickly abbreviated to QANTAS. At first their office was in Winton but moved to Longreach, which was more central to the route from Charleville to Cloncurry. They built a hangar and their own planes.

The Qantas Founders Museum is a wonderful example of a community getting together to honour the achievements of a group of remarkable people who established the iconic airline Qantas in Outback Queensland. It is a not for profit organisation and mostly run by volunteers. It gets funding from the Government and Qantas but it is not owned by Qantas. 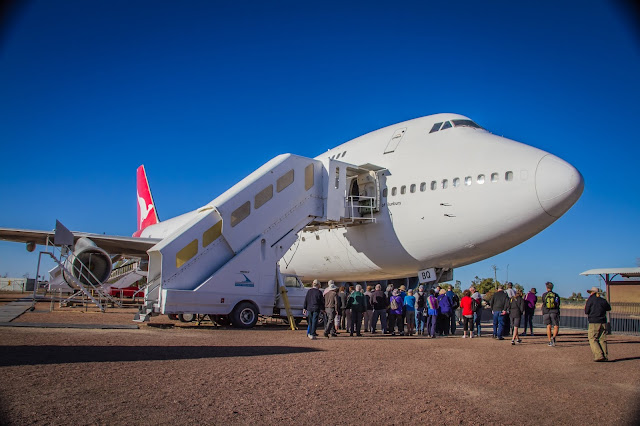 There are three areas in the museum. The outside where old historic planes are on display and where you can go on a guided tour through the planes. Then there is the main building with interactive displays and other historic artefacts and there is also the heritage listed original hanger. 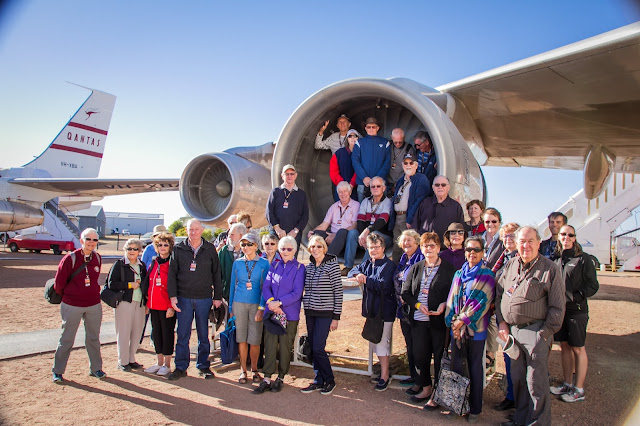 The tour is very informative. This 747 had flown for 92,125 hours, carried 5.4 million passengers and flown 82.54 million kms. It was donated to The Founders Museum by QANTAS. However, there was a problem landing it in the tiny country town of Longreach. The airstrip is only for small airplanes. Volunteers cleared trees to make way for the wings and extended the runway as much as possible. But it was still a risky business to get the jumbo to land. The Museum people didn't think they would get anyone to volunteer to fly the 747 to Longreach. However, they put an add in the paper and they had many, many offers to do the job. In the end they had to have a ballot. There is a video clip on You Tube showing the landing. 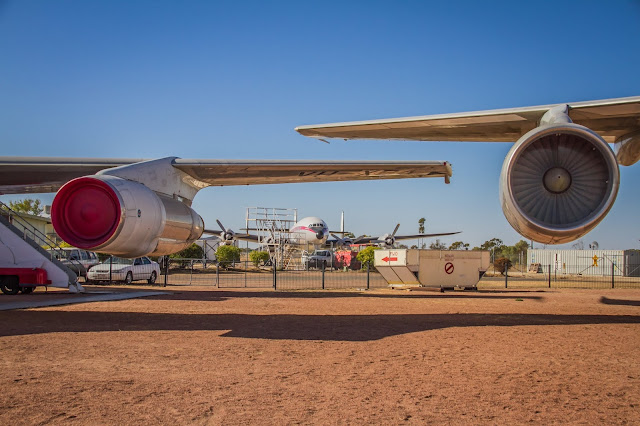 The plane on the left is a 707. It was the first jet ever bought by Qantas. A group of volunteer engineers    hunted for this plane to put into the museum. It had been sold by Qantas when it got too old for their fleet. They finally found it in an airplane graveyard in the UK. It was in a bad way but these volunteers flew to the UK and  managed to find parts or make parts.  After many months they had rebuilt the plane and got it flying again and they flew it back from the UK to Longreach.

The plane in the background is a constellation. It was brought here in pieces on trucks and then put back together again. The Museum board are about to start construction of a 7 million dollar roof to cover all their planes to protect them from the scorching, outback sun. 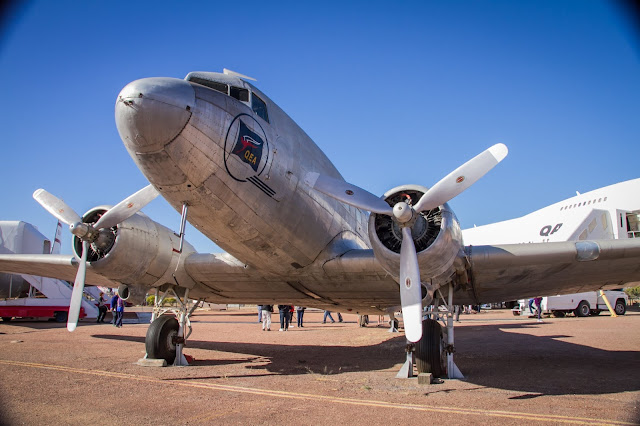 A DC3 which used to be an American airforce plane and then bought by Qantas. It also spent time in Papua New Guinea. 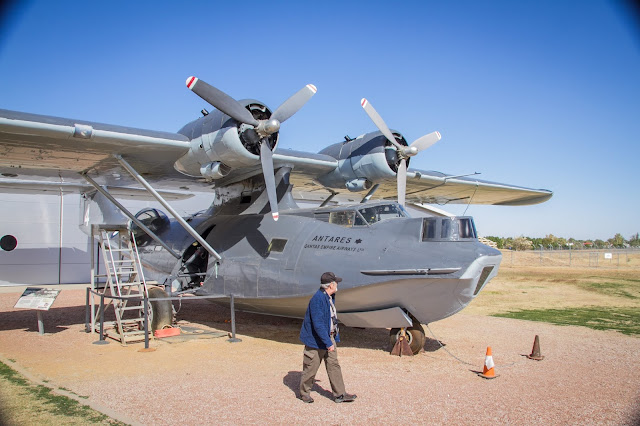 The Catalina flying boat used to fly from Australia to UK landing in Ceylon on the way. 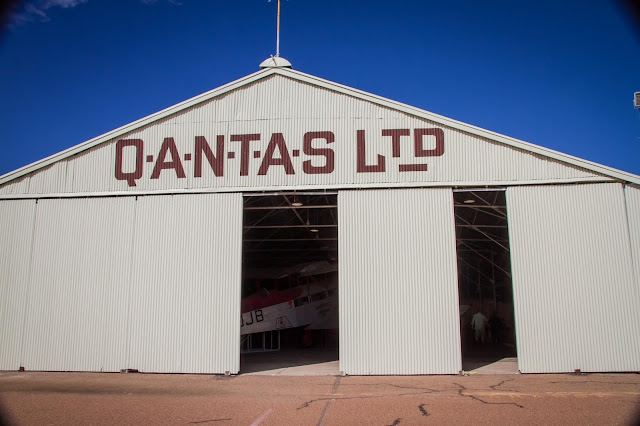 The original hanger is nearly 100 years old. It houses many of the very first planes Qantas flew. 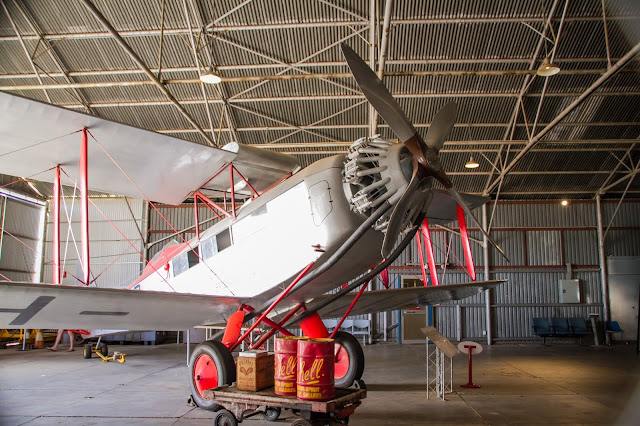 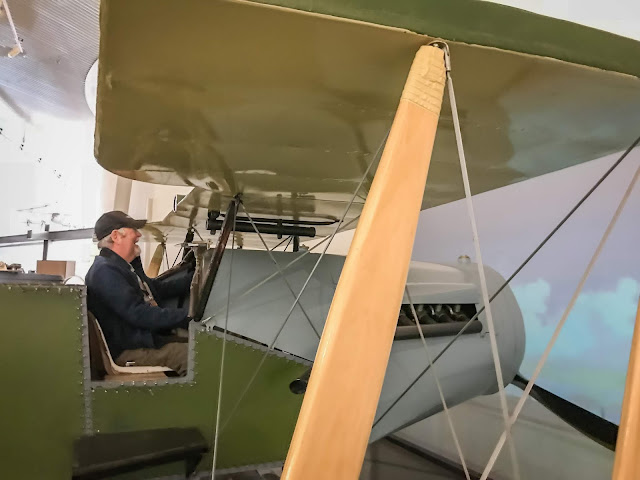 Then we went into the main building where there was much to see and do.
Posted by diane b

Email ThisBlogThis!Share to TwitterShare to FacebookShare to Pinterest
Labels: Longreach and Winton 2018, The Qantas Founders Museum