When I was living in Thun (pronounced Toon), Switzerland in 1970, I was woken one morning at 4:30 by hundreds of children in the street below our windows chanting, "Fuhlehung! Fuhlehung! hung, hung!" Bill explained that the children were seeking out an unknown person dressed as a court jester wearing a devil's mask. The children chase him through the town calling him Fuhlehung! (Lazy Dog!). This practice can be traced back to the 15th century.  The children of Thun are told this story: 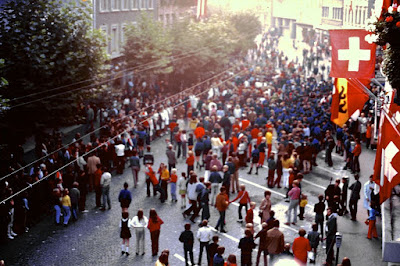 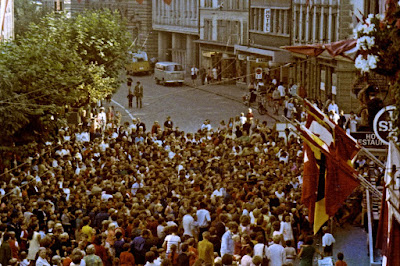 Now and then the Fuhlehung appears hanging out of office windows and throws the children sweets. 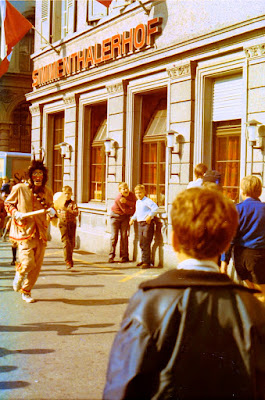 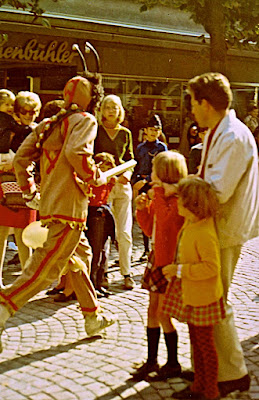 Then he suddenly appears again on the street and the children chase him again and again. He carries with him a baton and a bunch of inflated pigs bladders to whop those who catch him or pull on his mask. 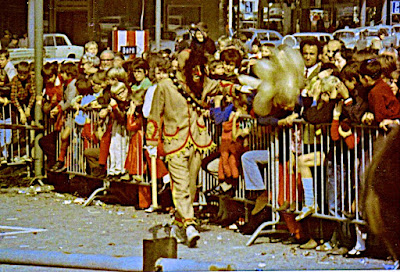 It is part of the annual "Ausschiesset" (Shoot-out)  Festival held every year in September. The shoot-out festival is where the town cadets have a crossbow competition. The festival stops the town for three days. There are processions, dinners and much partying but for the children the appearance of Fuhlehung is one of the highlights. In the above photo it is his job to keep the crowd quiet while the cadets are shooting. They shoot a target which is a picture of the mean ruler Gessler, who William Tell shot. The arrow nearest the heart wins. 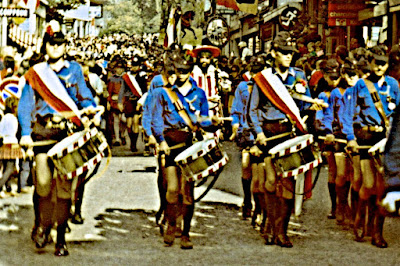 The town cadets march through the streets to and from the shooting competition. In the 70's it was boys only. Today girls are included and often win the competition.
It was fun experiencing this custom of Bill's town.