BEING SILLY, BREAKING RULES BUT IT WAS FUN.

We are often upset with youths of today being irresponsible and doing dangerous things, but when we were young, didn't we sometimes be silly and break the rules to have some fun? Maybe you didn't but I'm afraid I did sometimes. Here is one of those times. 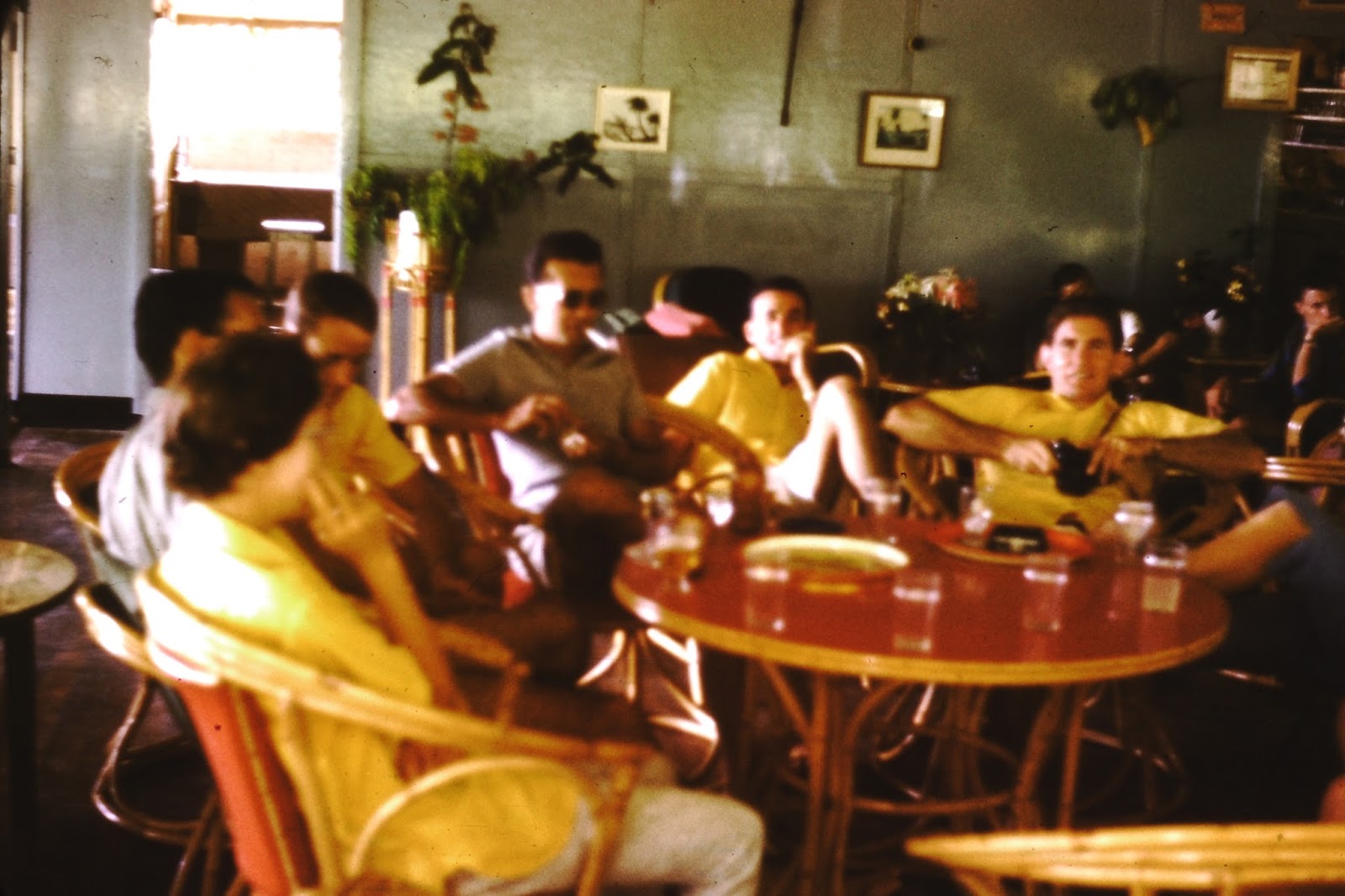 In 1964 when I was working in PNG, I belonged to a scooter club,  Every Sunday we would go on a ride somewhere different for a picnic.We thought it would be nice if we all wore yellow shirts. We couldn't find any in the stores so we bought white ones and dyed them. Not a good idea but that is another story for another post.

This day we went on a trip to Bisianumu. From memory it was the name of a cattle property up in the foothills of the Owen Stanley Mountains. We left Pt Moresby and scootered up the gravel road to Roana where we stopped at the hotel and had some refreshments. I don't remember any other buildings in Roana, it was a good place to go for a drive and a drink. 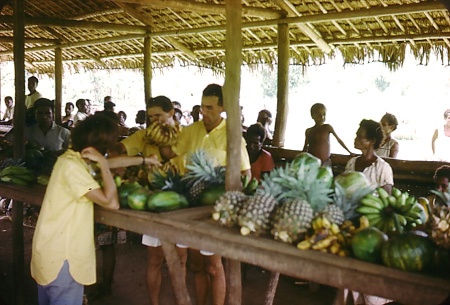 On this day we were going further up the range. We stopped at the next village, Sogeri. Here there was a native market  full of fresh cheap produce. We bought fruit to go with our lunch. 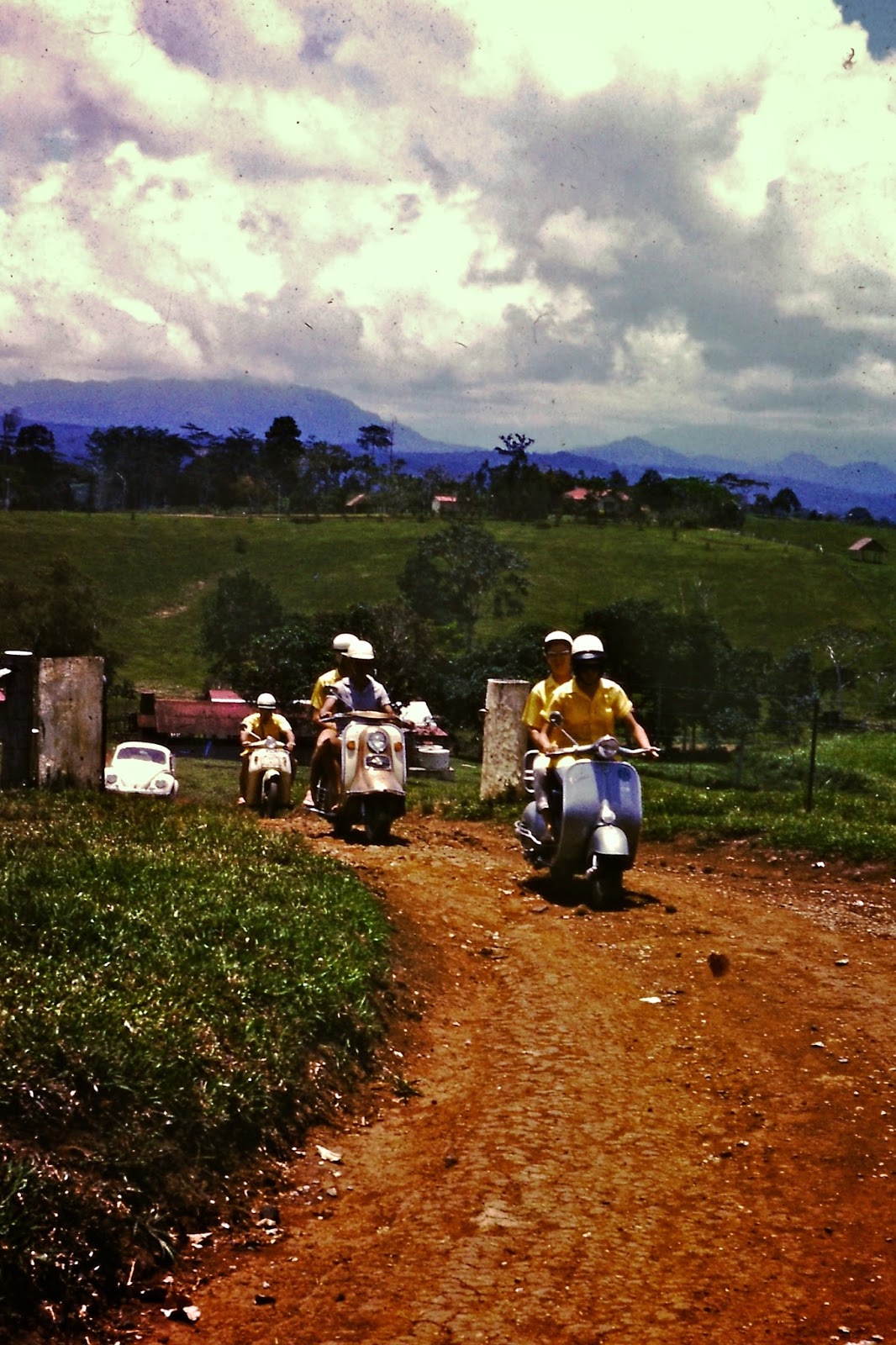 The road got more narrow as we climbed even further up the range. We finally came to the cattle property. We had previously rung and asked for permission to enter the property to reach the waterfall and swimming hole. We had to make sure we closed the gate after us. We had a friend following us in a VW because he didn't own a scooter. 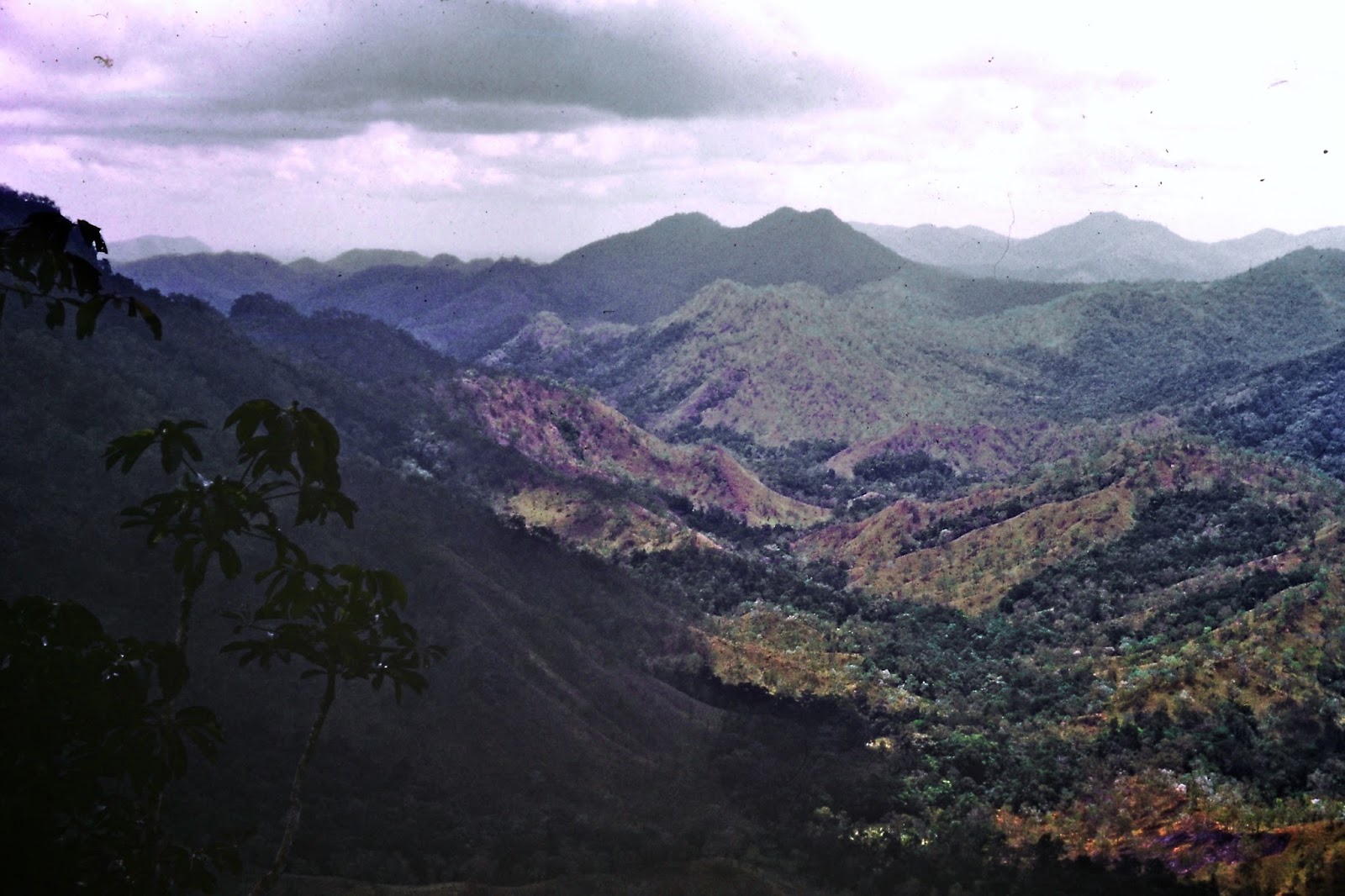 Finally after the bumpy road ride we reached our destination. The views were stunning. Rugged, jungle clad mountains for as far as we could see. This and the next two photos were a panoramic view from where I was standing. 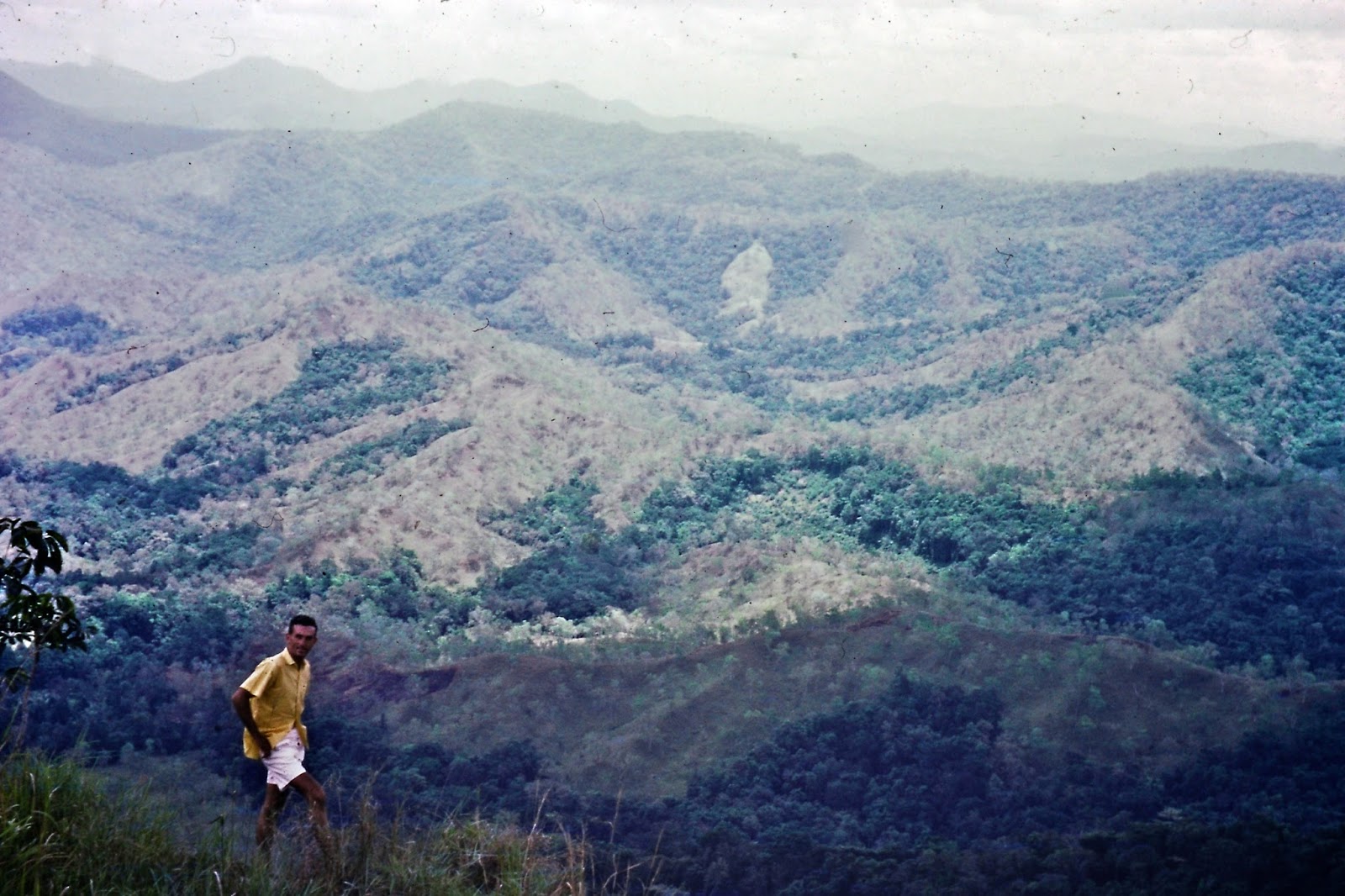 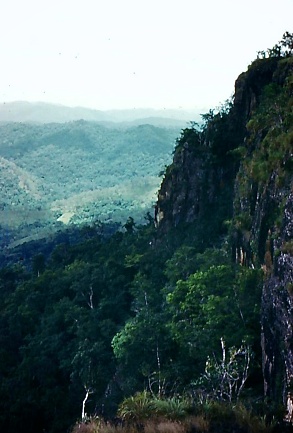 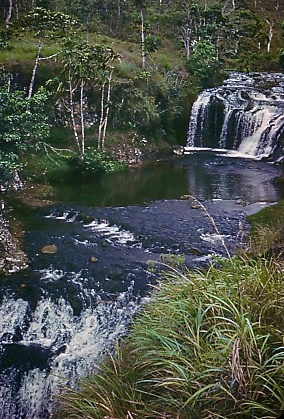 Behind me there was an idyllic waterfall tumbling out of the mountains and... dropping over a cliff to the valley below. 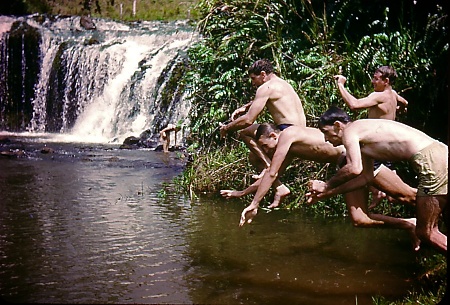 The swimming hole looked so inviting after the hot dusty ride up the mountain but it was freezing cold water. 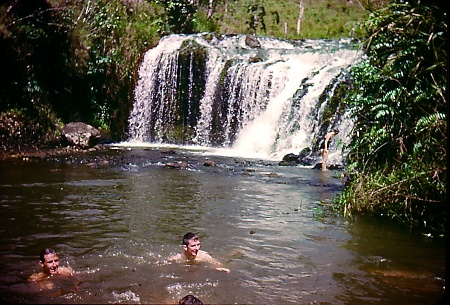 I didn't stay in too long. We had a picnic lunch and a laze in the shade. All to soon it was time to pack up hop on our scooters and roll down the mountain. The boys had another adventure for us before returning home. 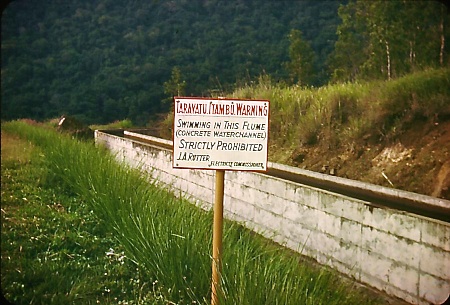 We stopped at the flume. 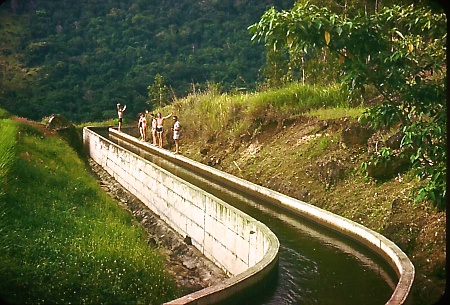 We climbed onto the wall of the flume and started to walk up. I got dizzy from watching the water swirl past on its way to the reservoir, so I stopped and decided to take photos instead. Scaredy cat again. 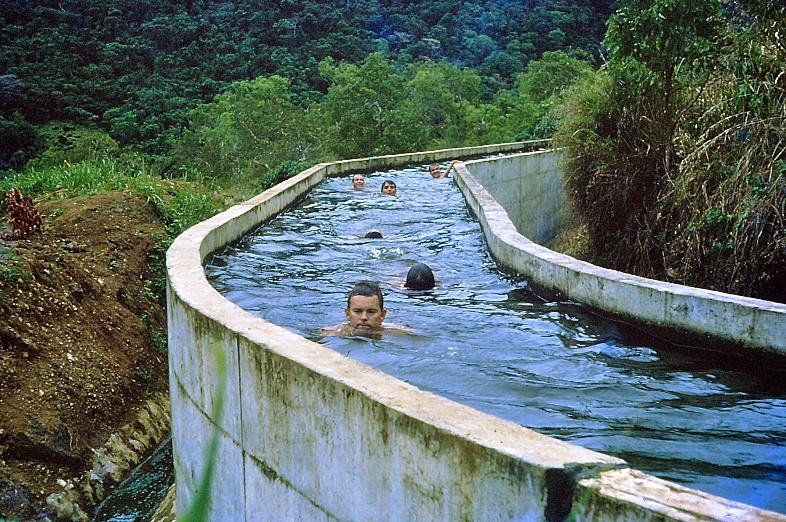 Photo Charles Betteridge
After a while I could hear screams of mirth and laughter and then I saw their heads bobbing down the fast flowing water. They had travelled about 1k, I jumped in for the last few hundred metres. 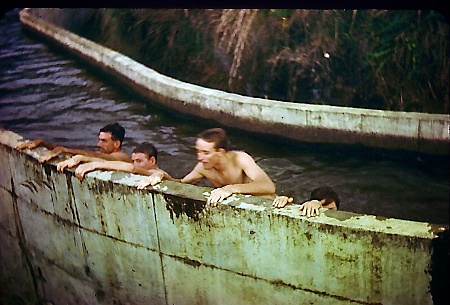 At the end of the flume the water is sucked into a tube which then empties into the reservoir so you have to defy the swiftly flowing water, grab hold of the edge and haul yourself out before you get sucked in to the tube. Now, I think that was a bit of a dangerous thing to do, but then when we were young and silly, it was fun getting swept along the flume without having to swim.