AM I REALLY AT WORK?

In January 1964 I had been in the Territory of Papua New Guinea for a few months working at the District Education Office in Pt Moresby, while I was waiting for the schools to reopen after the summer holidays. It was very easy work shuffling papers and trying to look busy as well as watching the tropical fish swim below the office which was built over the water on stilts.

On the weekends I was taken on trips to places around Pt Moresby. I didn't have any transport of my own and I can't remember who I went with. I didn't know anyone other than those I had met in the office, so it must have been someone from the office.

There weren't many sealed roads but the road up the ranges north of Pt Moresby was fairly well graded. This was because it led to the Rouna Falls Power Station and Sirinumu Dam.

There was always plenty of water flowing over the falls coming from the rainforest clad Owen Stanley Mountains.  Power was generated here to supply Pt Moresby.

After stopping to view the falls and listen to the thundering water we drove further up the mountain to the native village of Sogeri, where there was a market selling fresh fruit and vegetables. 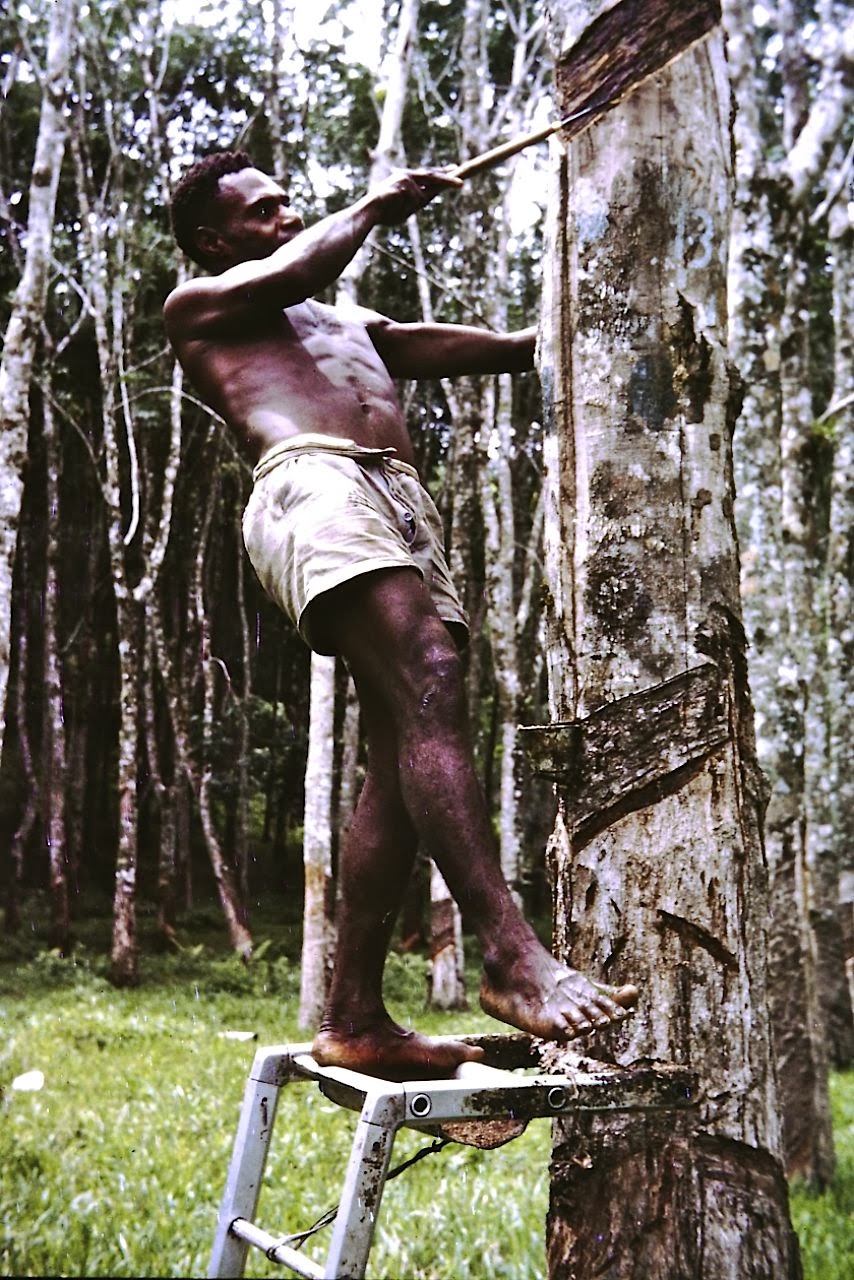 Then I was taken to see a rubber plantation. Something I had only read about in school text books. I could see how the white, milky sap was being collected in a little metal cup from a 'v' shaped gash in the trees.


There was a worker cutting new strips of bark off to release more sap. Just like I had seen on the pages of my Geography book at school. 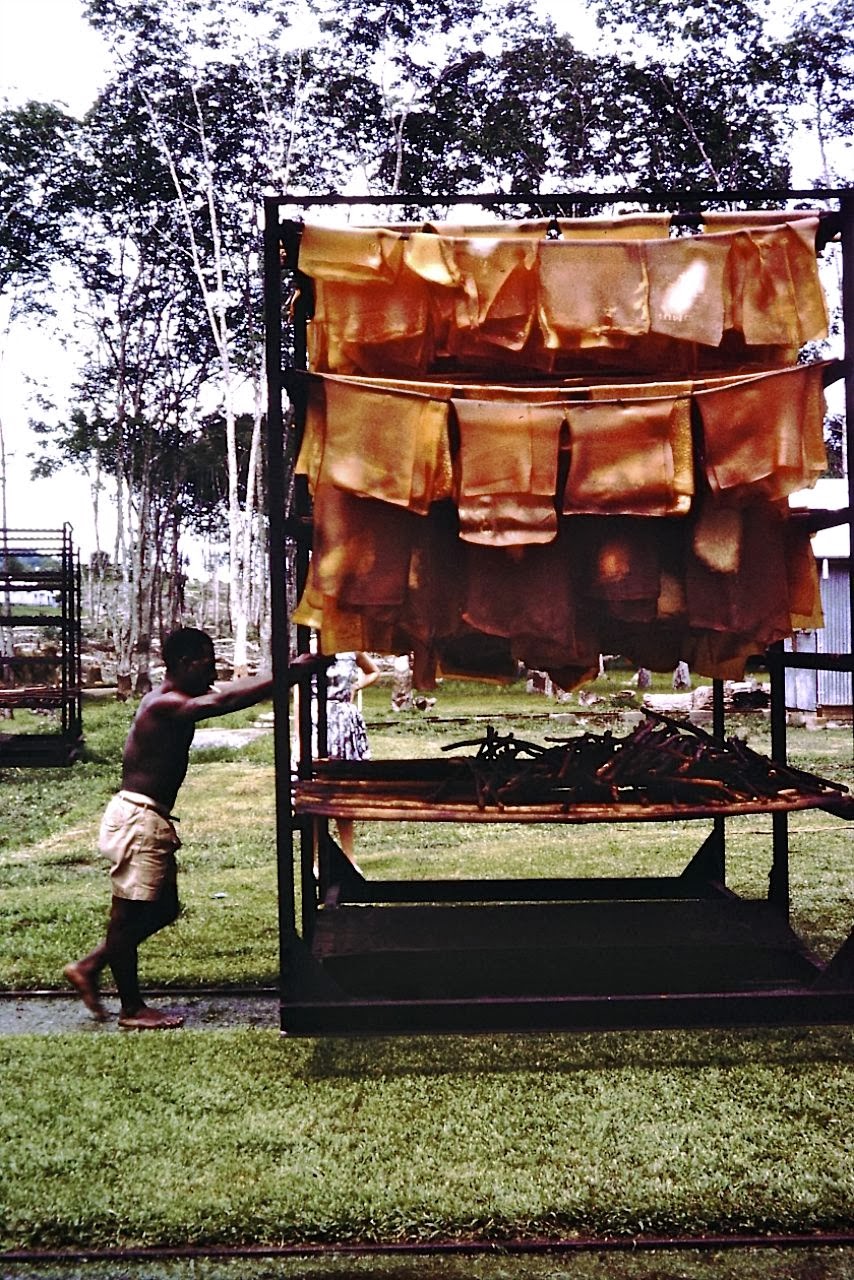 I saw how the sap was turned into latex sheets and then fired or smoked and turned into rubber sheets ready to be exported.

It was all very interesting but the day was getting late so we headed back to Pt Moresby. We stopped on the way down the mountain at Rouna Hotel for a cool drink in the gardens.

We had to keep a watch on the sky and leave at the first sign of the afternoon storm clouds arriving. The road turned into a muddy slippery slide when it rained.

Every week that I worked in the office, I would ask," Which school will I be at and who will be the head teacher?" Finally a week before school was to start, I got an answer. I was told that I had a position at a brand new "A" school at Korobosea. "A" stood for Australian Curriculum School to differ from a "T" school which stood for Territory Curriculum School. In general "A" schools were for European children which was a term used for Australians and any other expat people from all different countries. "T" schools were for native children but it wasn't apartheid it was more beneficial to teach native children together because they had to learn English and a curriculum more suited to their culture where as the expat children followed the Australian NSW curriculum. However, if native parents wanted their child to go to an "A" school they could and in some smaller villages expat kids went to the 'T" school because it was the only school there.

A few days before school started I met the principal, a very young fellow, who said, "Let's go to see our new school and start preparing our classrooms."Off we went and what a surprise we found. Workmen were still building. There were no steps up to any of the buildings and there was a bulldozer bogged in the mud which was supposed to be the playground/school yard. There was no way children could move in here in four days time. 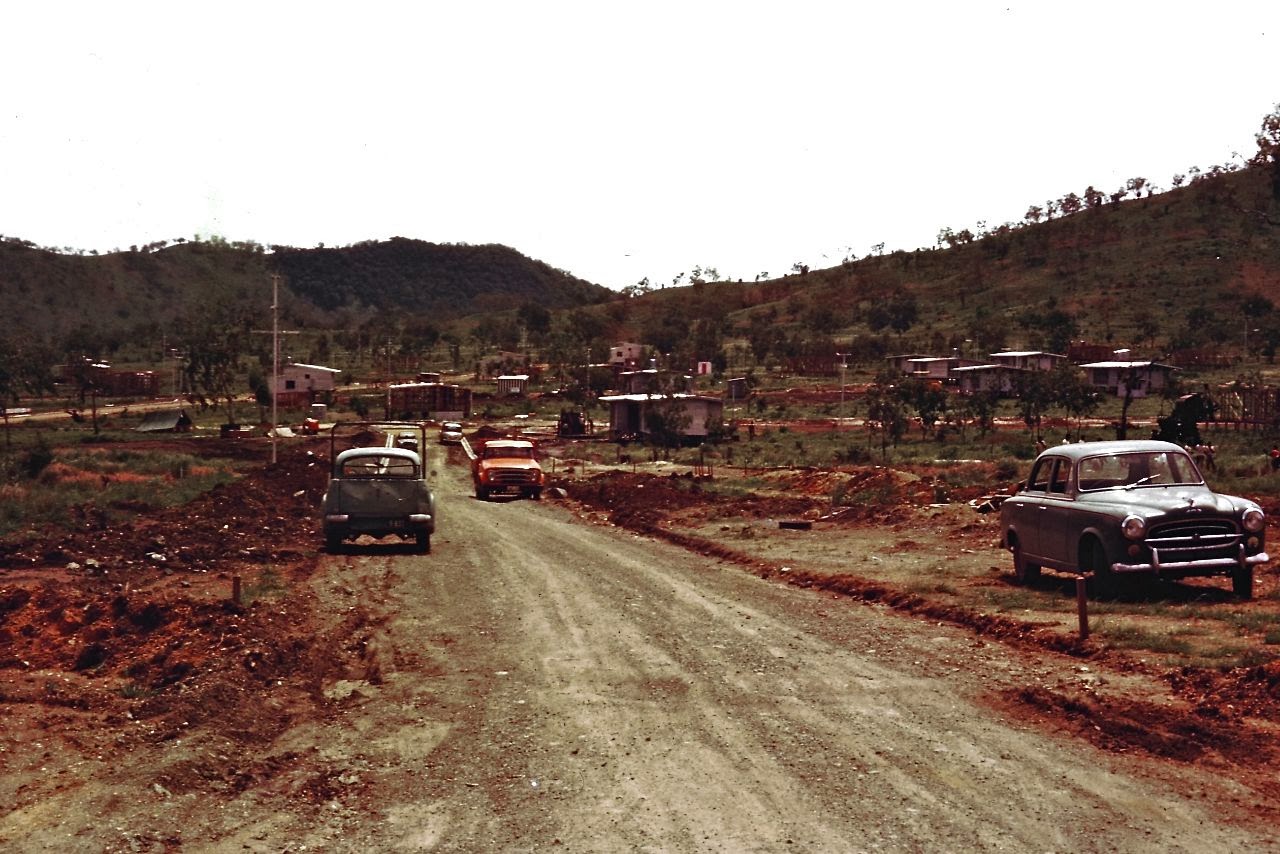 We headed down the new muddy road and back into town to the office to tell them the situation.
When school started for the year the children had to return to their old overcrowded schools in Boroko and Ela Beach. I was told to report to Boroko East School.  Although disappointed that I wouldn't have my own class and room yet for a few weeks, it was good to help out in a classroom with an experienced teacher to see how things were done in an "A" school.
Posted by diane b