A ROOM WITH A VIEW

In 1964 I had just started a new career. I was working for the Australian Government, teaching in the Territory of Papua/New Guinea. I was posted to Pt Moresby and I lived in a hotel until hostel accommodation was found for me. I was looking forward to having my own place. 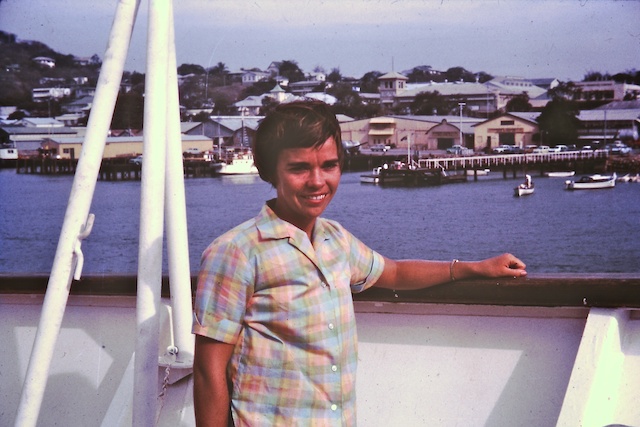 One weekend I was invited to look over a survey ship which had docked at the wharf.
(Once again I have been scanning 50 year old coloured slides and sometimes I just can't get back the original colours) 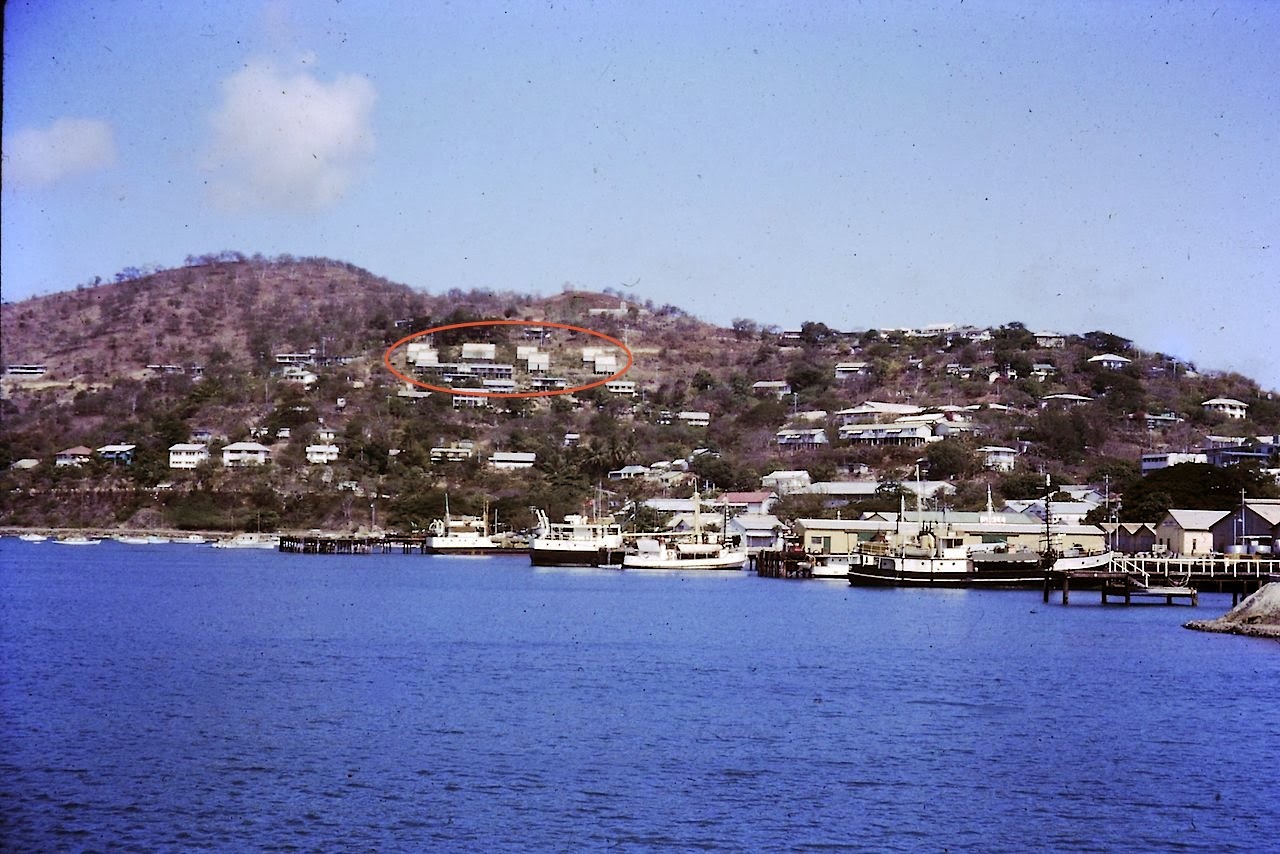 From the wharf I could see where I lived. It was Touaguba Hostel on Touaguba Hill overlooking the harbour. In the red loop you can see the buildings. I lived in the block at the far left. 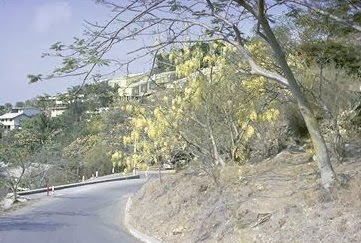 It was a windy steep hill to climb up to the hostel. You can see one of the blocks sloping down the the hill. I made friends with Jan when I lived there and we are still in touch after 50 years. She let me use her photo from her website here, where you can see more. She also has a super memory and is helping me write these posts via emails as she lives in Adelaide in South Australia. 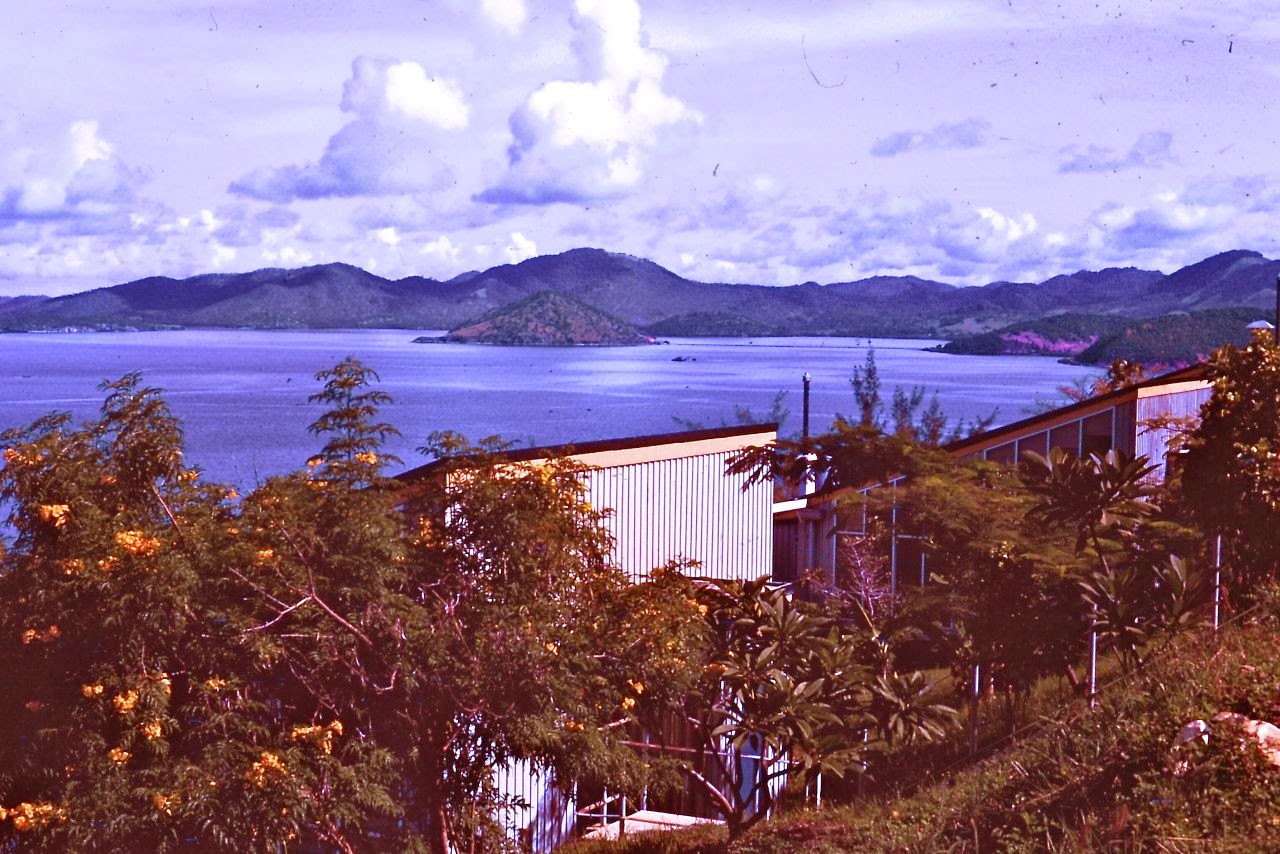 There were three accommodation blocks nestled into the side of the hill following the lie of the land. The views were spectacular. Here we are looking down the harbour inland. 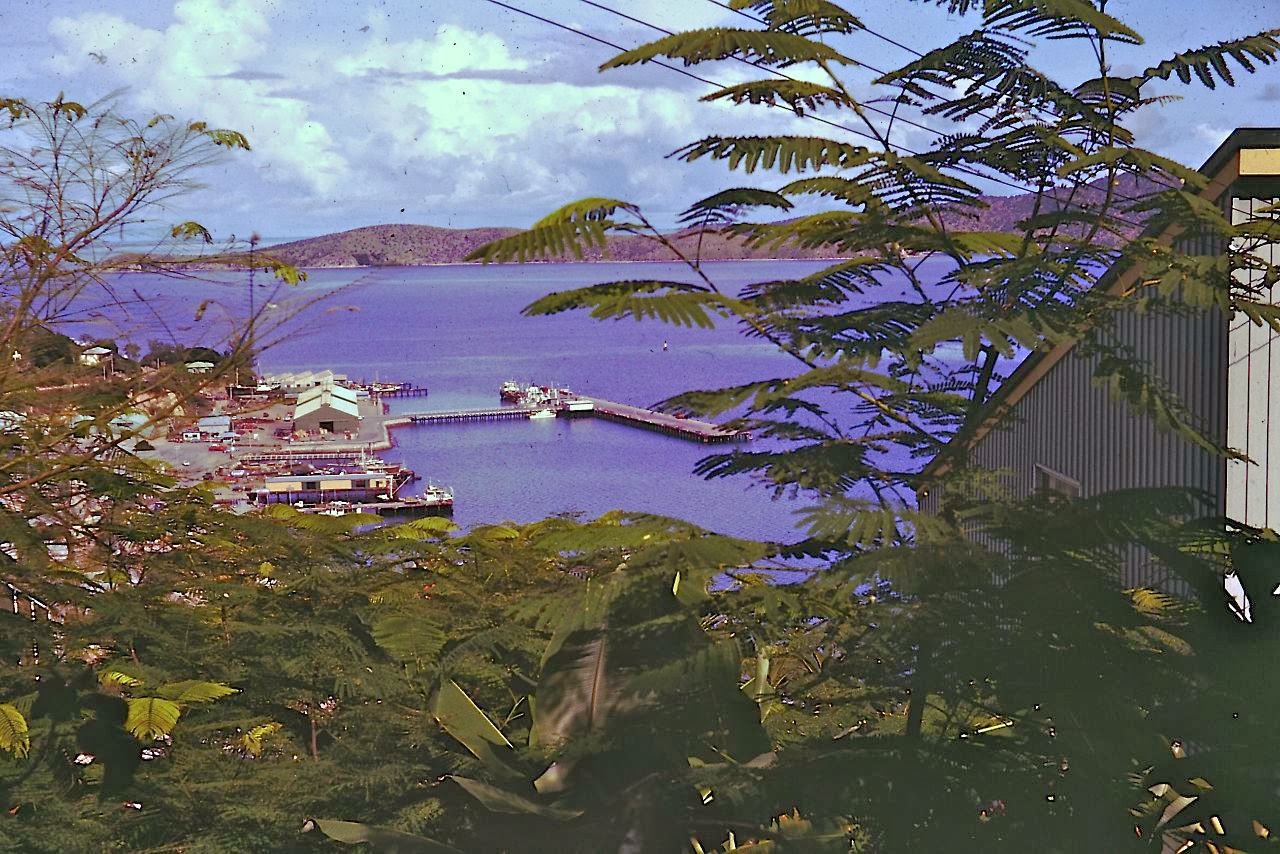 Looking back we see over the wharf to the sea. 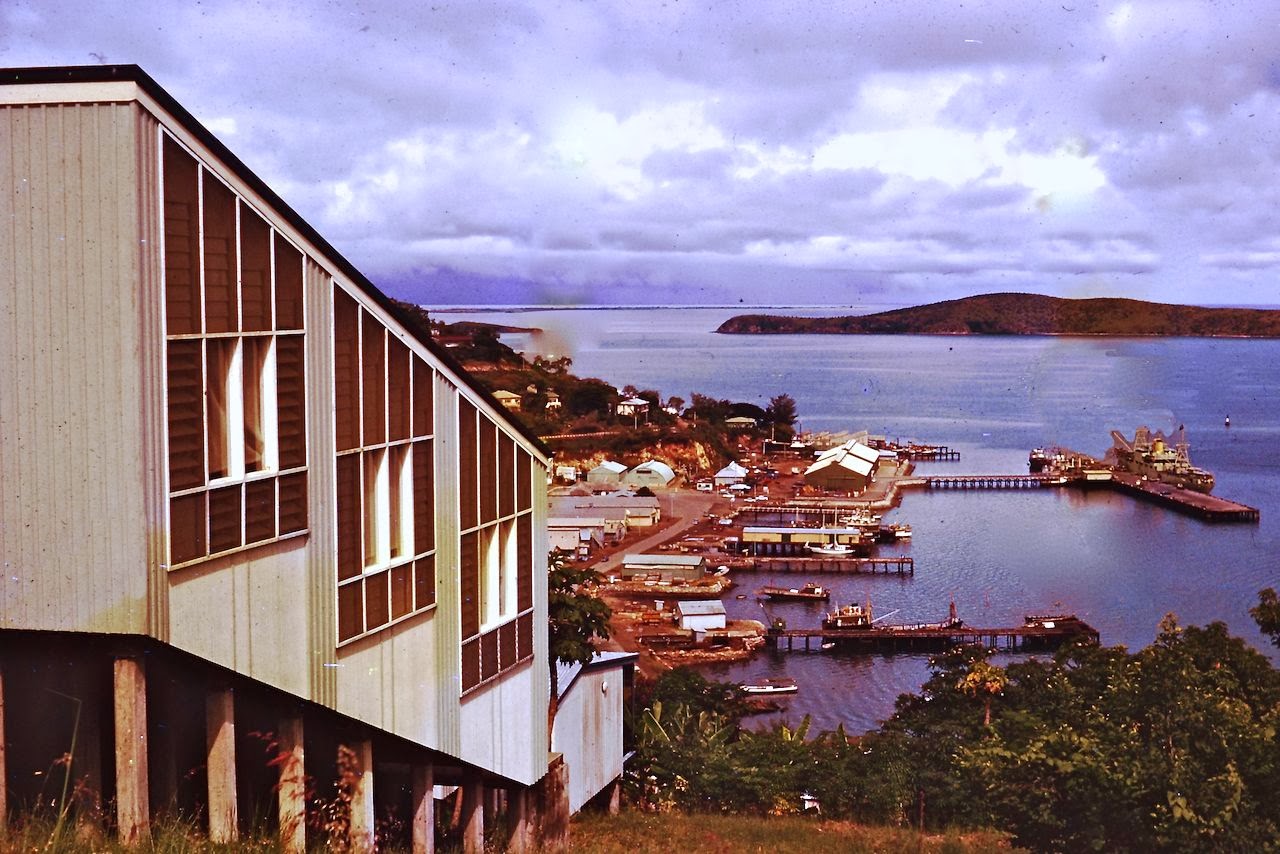 This is the bottom half of my block. There were 10 rooms for ten girls. There was a  kicthen, laundry and bathroom to share. We hardly used the kitchen because there was a dining room where we had our meals provided. The government provided the accommodation and meals. There was a fourth block below ours. So there were 40 single girls living there altogether. 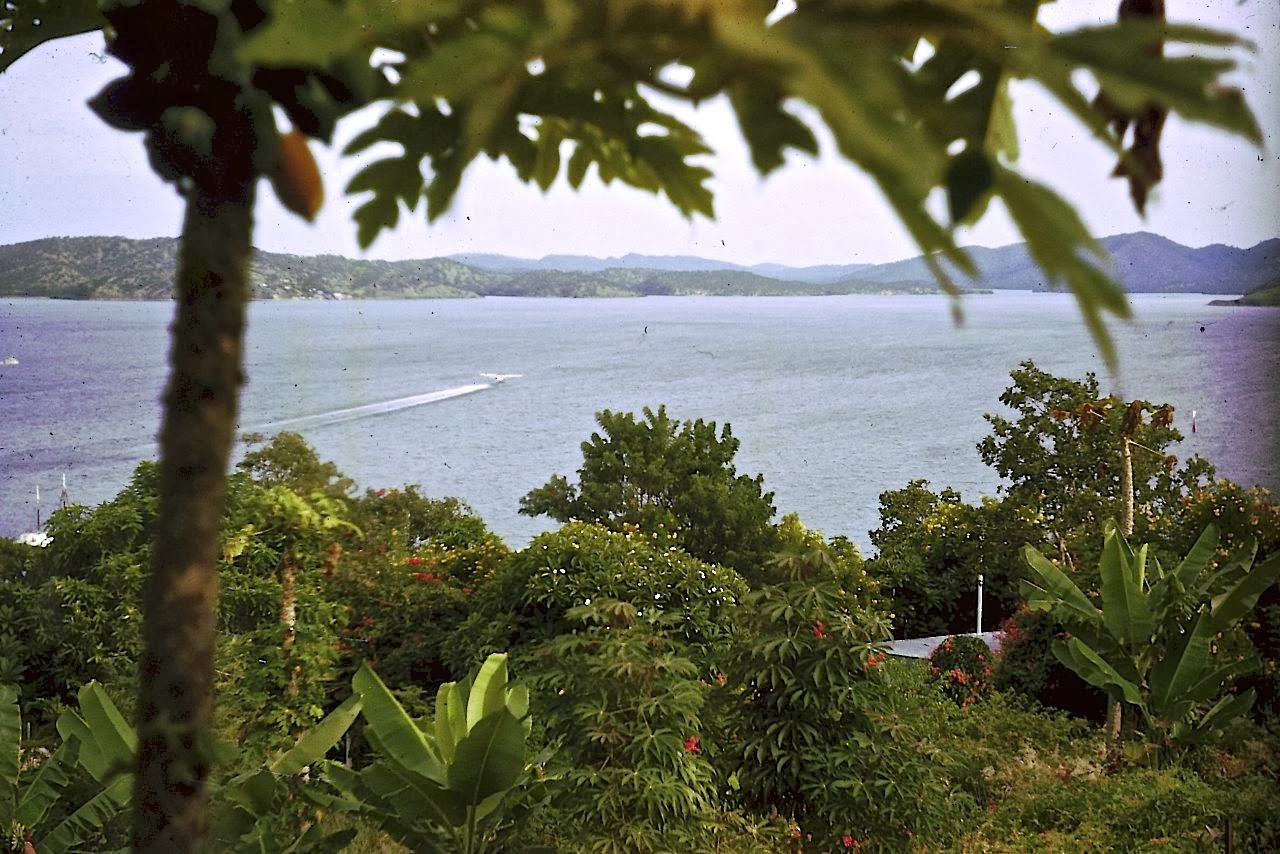 I used to watch the Catalina plane land and take off from the water and admire the tropical plants. The paw paws were hanging outside the window and there were banana trees and many colourful leafed plants. 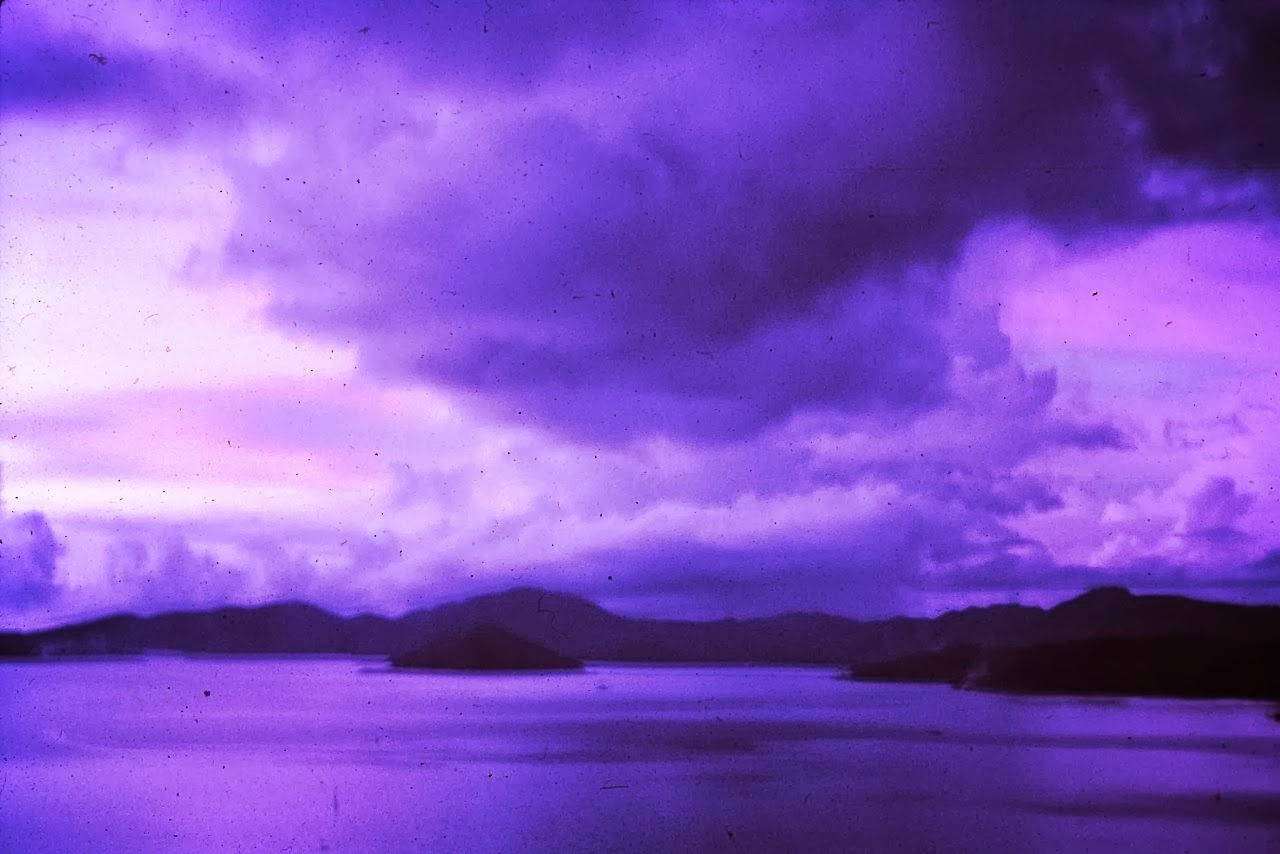 There were often beautiful sunsets over the harbour. Sometimes pink  and....... 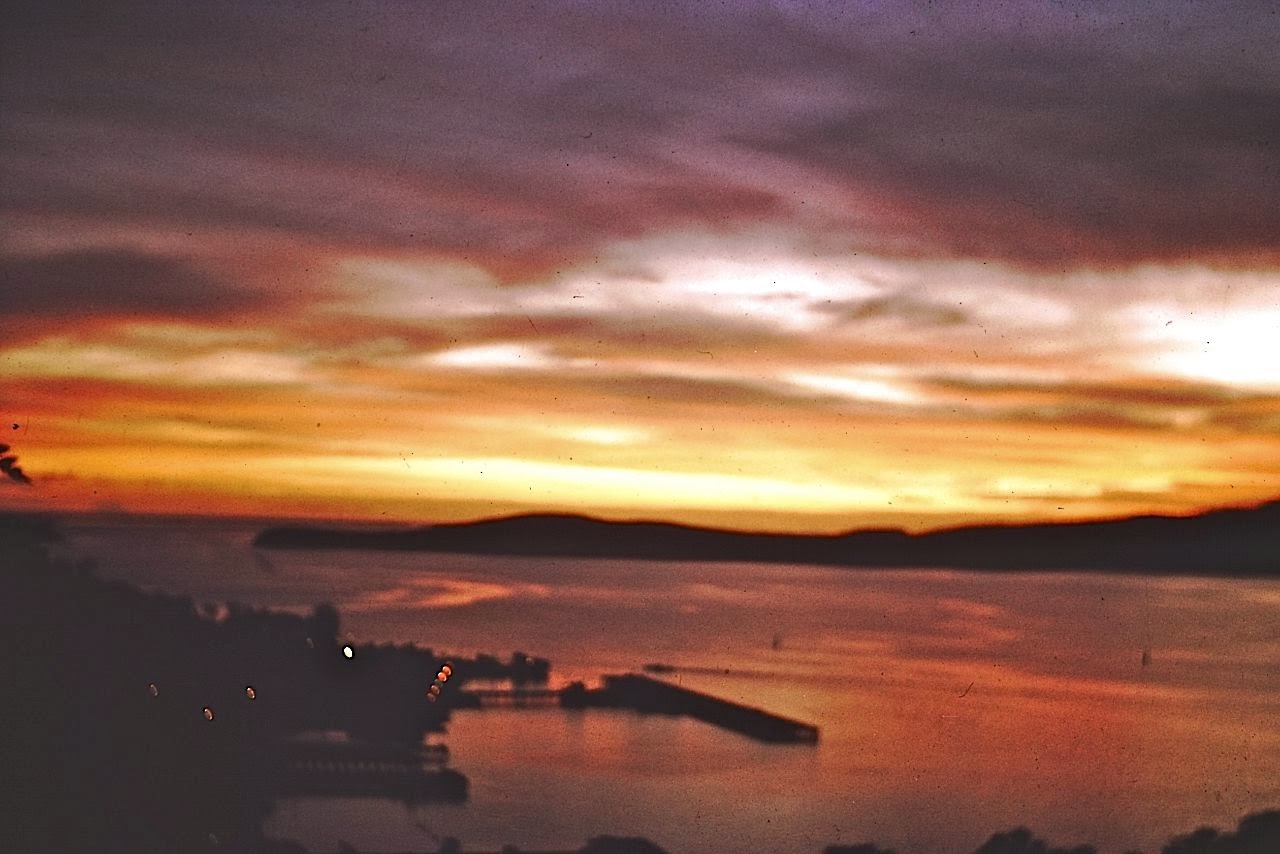 sometimes orange. I loved the way the water changed colour too. 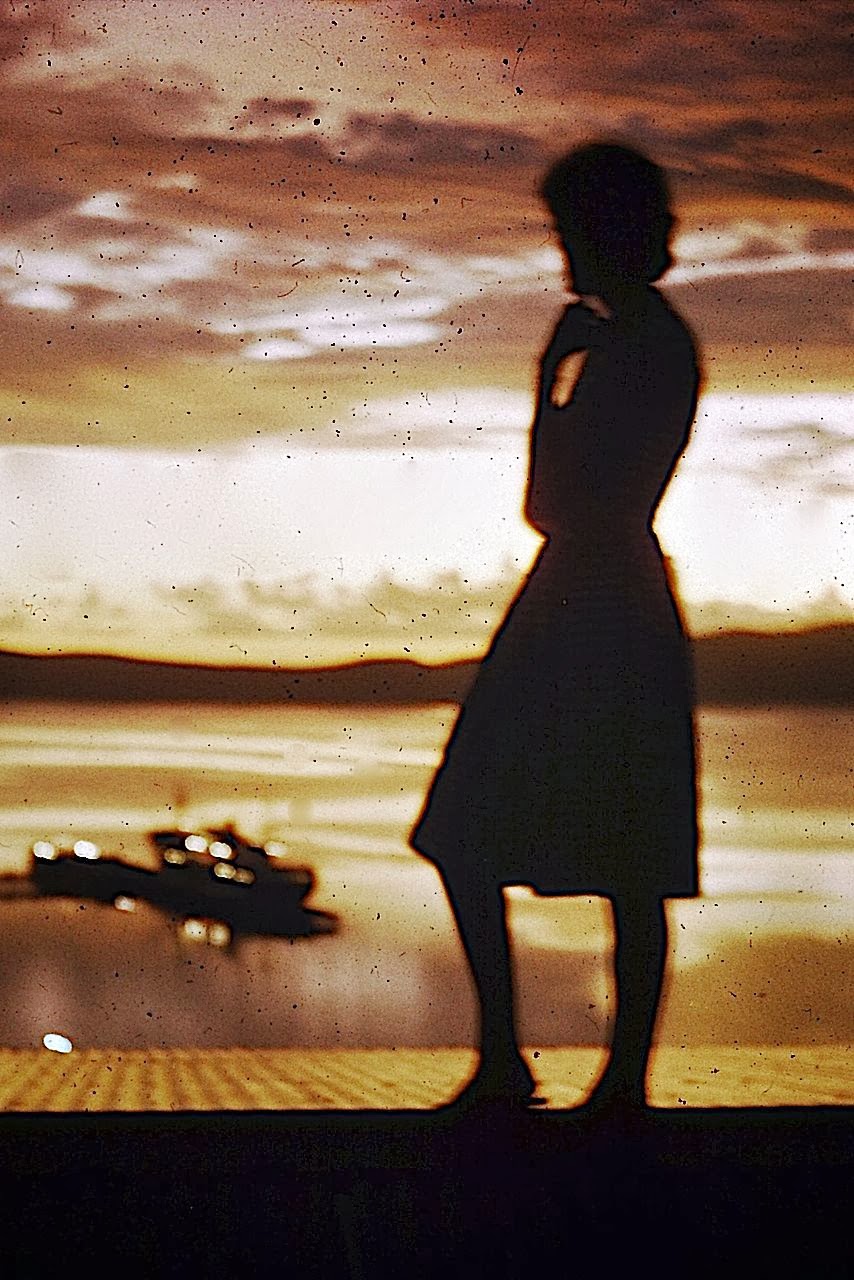 There wasn't a lot of places to go after work in the evenings. I didn't like to frequent hotels and it wasn't sensible for women to go out by themselves at night. So just for fun some of the girls would climb on the roof of our block and sit there watching the sunsets and chatting. I obviously took my camera and played around. 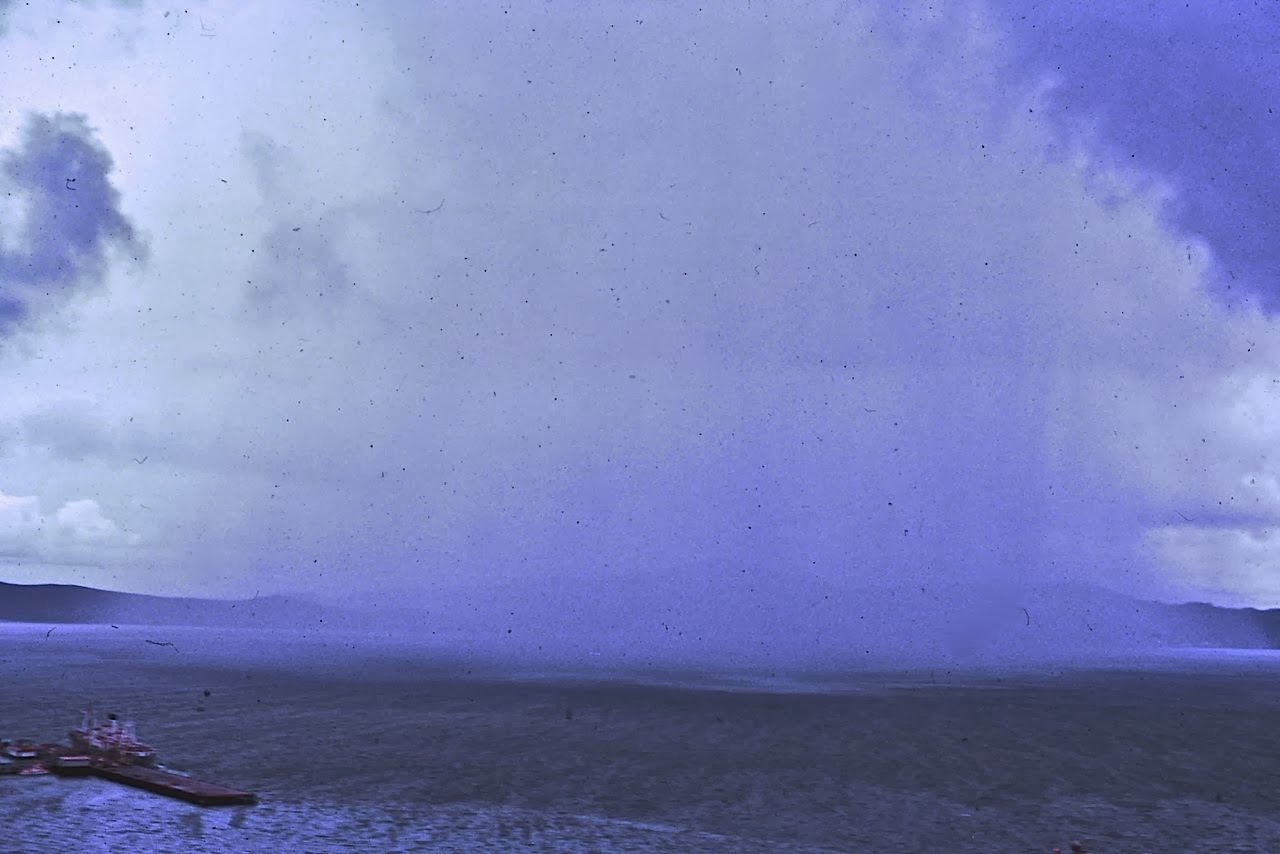 In the wet season we had a tropical down pour every afternoon. Sometimes you could see it coming like a wall of water. 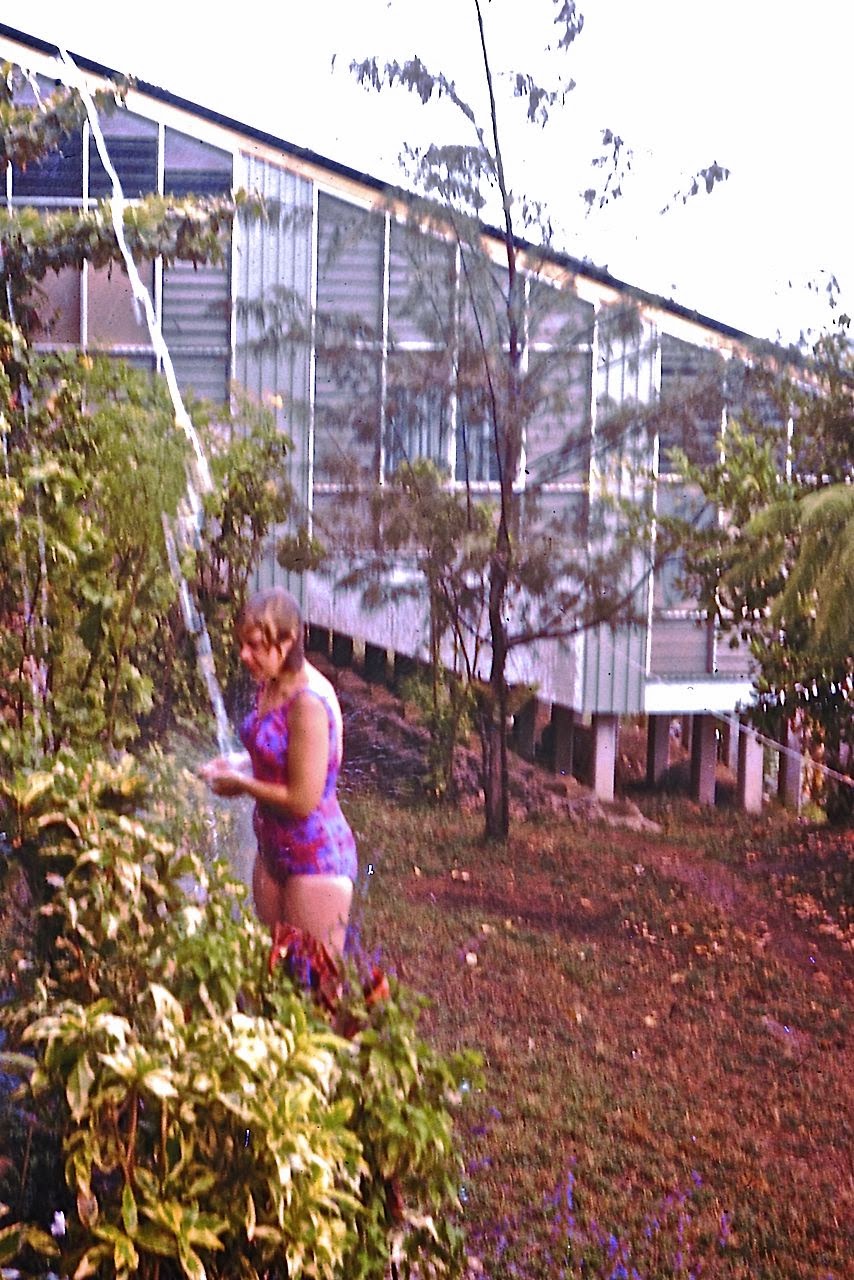 It would thunder down on the metal roof. (We didn't stay on the roof at these times). It was so noisy we couldn't hear each other talking. However, we devised a great way to cool off by standing under the open gutters. It was always hot and steamy in Papua/ New Guinea all year long.

It felt like I was on a vacation not here working. 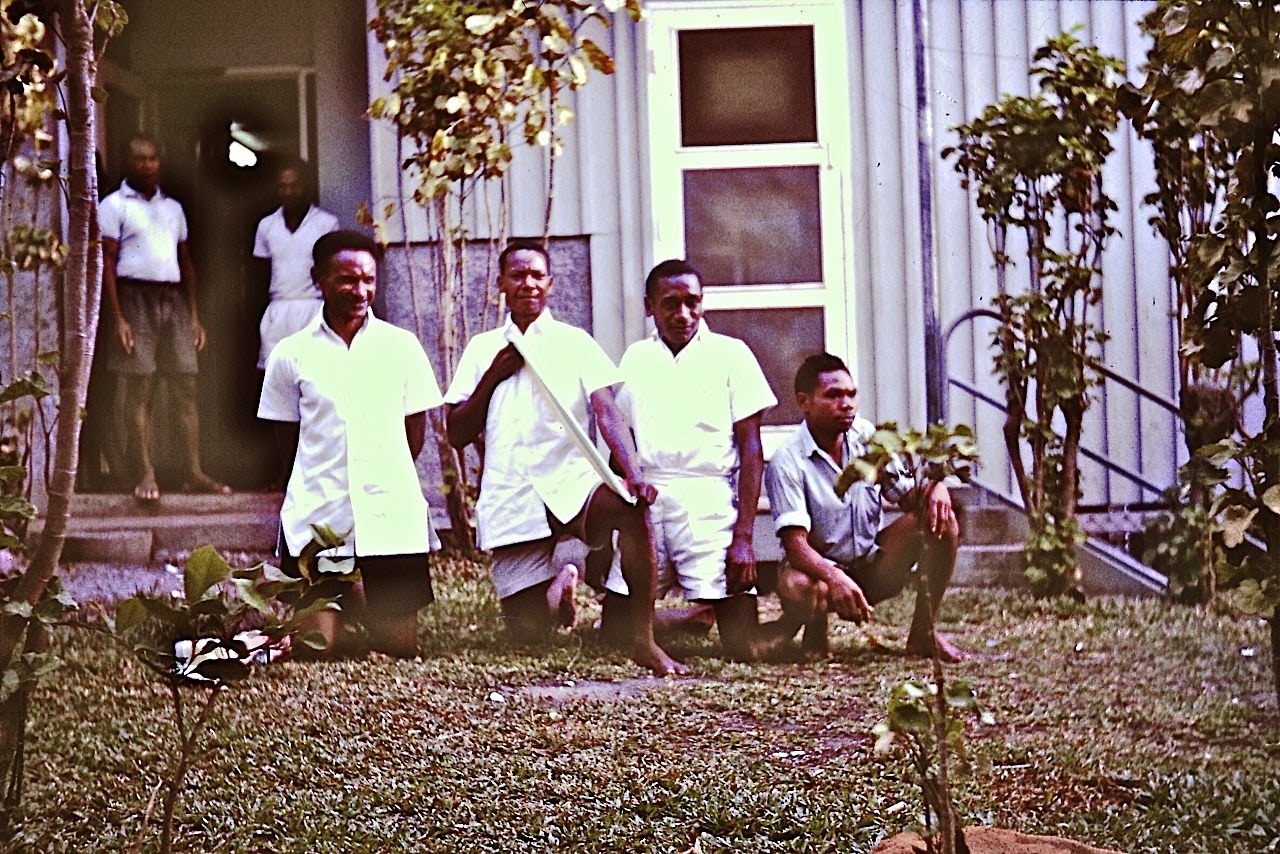 The staff who worked in the kitchen and dining room. They spoke Motu which was a lingua franca for Papuans as there were many local languages. On the northern New Guinea side of the island the lingua franca was Pidgin English.
Posted by diane b