Last weekend there were 71 buildings opened for the public to visit and be taken on tours of the buildings. Sadly, one can't visit 71 buildings in a weekend , so we looked at the list on their webpage and decided to visit a few.

First choice was the old Boggo Rd Gaol, but when we arrived, there was a long queue just to register for a tour later in the day. So, TOH, having an aversion to queues decided it was coffee time instead. There was a coffee shop in the beautiful new building next to the old gaol, which was also open for tours. So after coffee we joined a tour group without queuing for long.

The building is 'Ecosciences Precinct" a $270 million building designed by Hassell. It won awards for architecture and sustainable design principles. Hassell created a highly collaborative environment for scientists dedicated to solving some of Australia's biggest environmental challenges. 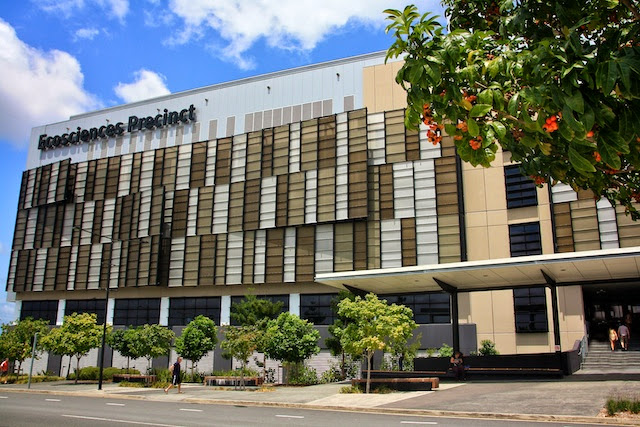 There are actually three buildings joined together with atriums. 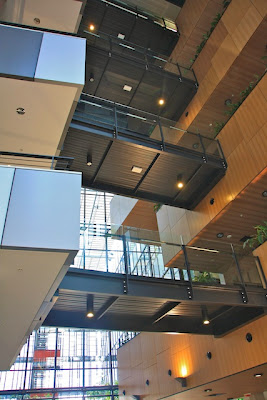 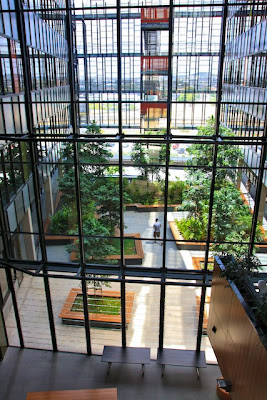 Looking up from the foyer you can see how the buildings are connected on each floor. Then we went up there and went into each of the building. Looking down into the atrium was beautiful. There were many seating areas and coffee areas overlooking this relaxing scene. It would be a great place to work.
Thousands of scientists work here covering a varied range of studies all to do with the environment. 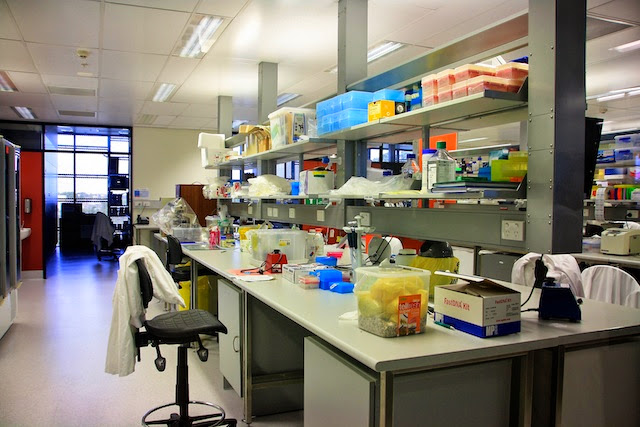 One of the many labs. 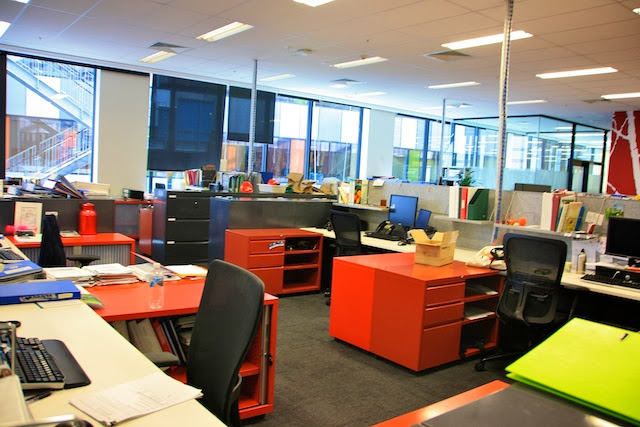 One of the many open office spaces. 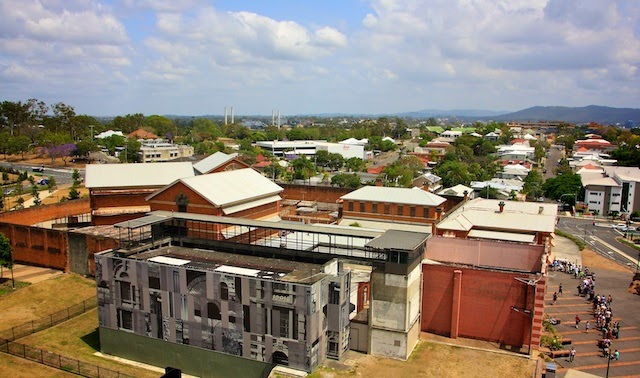 From the roof of the building we could see the old gaol and the queue was still there. There is an interesting grey mural on this side. It has many different scenes of the gaol. 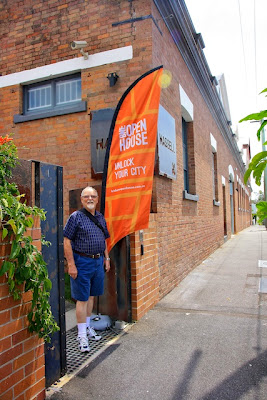 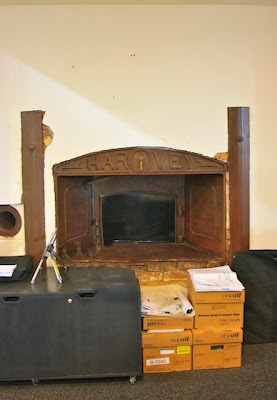 The Ecoscience building was designed by Hassell Architects and interior designers, the same company that our daughter, Carol-Ann works for as a Senior Associate Interior Designer in Sydney. We noticed that the Brisbane Branch of Hassell was open for inspection so we had to visit to see where Carol-Ann works when she comes to the Brisbane Studio.
The building was originally built as Keatings Bread Factory in the late 188o's it has been used for varied occupations since but in 2008 Hassell stripped the building back to its original state and added new buildings in a similar style. The original ovens were exposed and left as a feature. 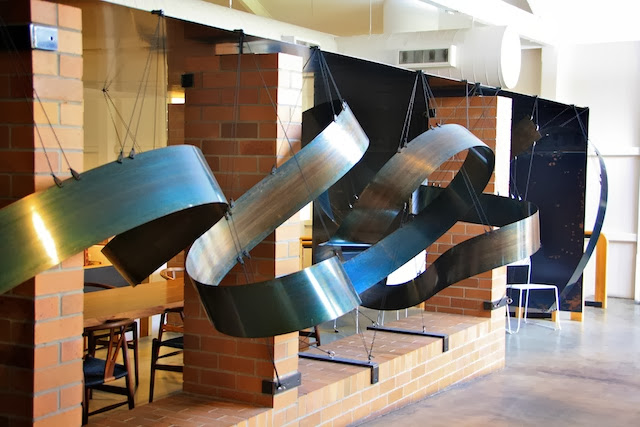 An interesting sculpture in this open-plan interconnecting studio and gathering spaces for architects, designers and clients. It was an interesting building to see how modern ideas have been integrated within a historical building. 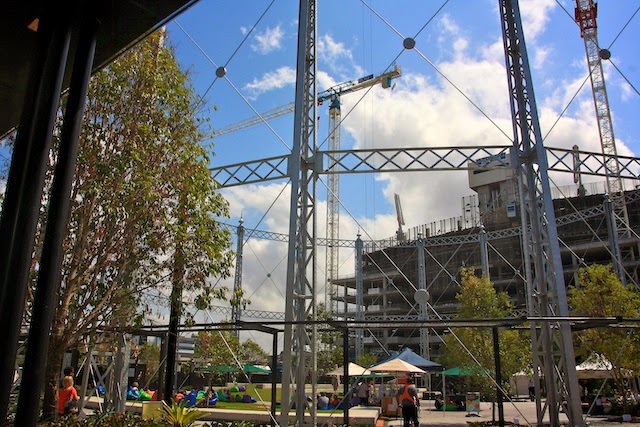 WE tried to visit the old museum building but we couldn't find a park so we continued on to 'The Old Gasworks" which was celebrating its 140th birthday. It was originally built to light the city with gaslights. It is no longer used and the Tank has been removed but the structure has been renovated and the area inside made into a plaza. At night it has a light show turning it into a piece of art. A new building is being constructed behind it. On this side there is a new shopping mall with trendy shops. 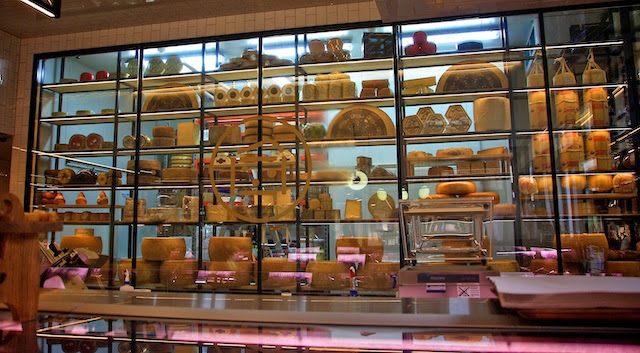 We enjoyed the deli, it had a big variety of cheeses. TOH couldn't resist buying his favourite 'Tilsiter". 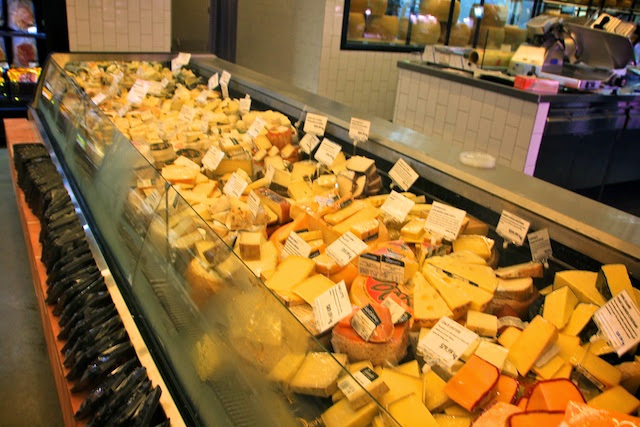 We had lunch in the mall in a spanish restaurant and then headed home. 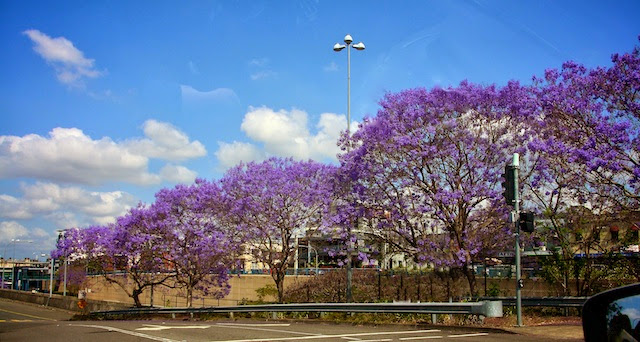 The streets of Brisbane are looking beautiful at the moment as the Jacaranda Trees are in bloom.