The Sunlander is the name of the train that runs the 1000km between Brisbane and Cairns in Queensland.  A few months ago we flew to Cairns and then went by road to the tip if the state. Then we flew back to Cairns and caught the Sunlander home to Brisbane. It took two days. Our trip made us realise how big this state is and how isolated it is in Far North Queensland.
Aussie trains are not the most modern trains we've travelled on but it was a fun experience, especially as we were with fun loving friends, Ann and George. However, the trip from Cairns to Brisbane is ranked as one of the best 25 rail journeys in the world. 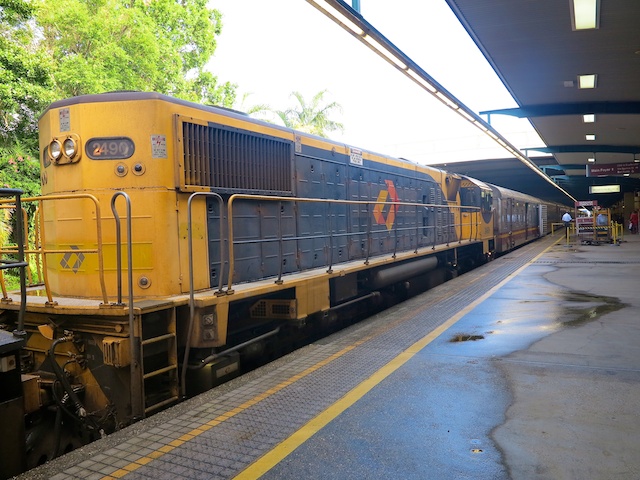 The diesel engine pulling the train is quite ugly in comparison to the romantic steam engines but they are much cleaner. It was a wet morning and we were happy to be going home after such an adventure. 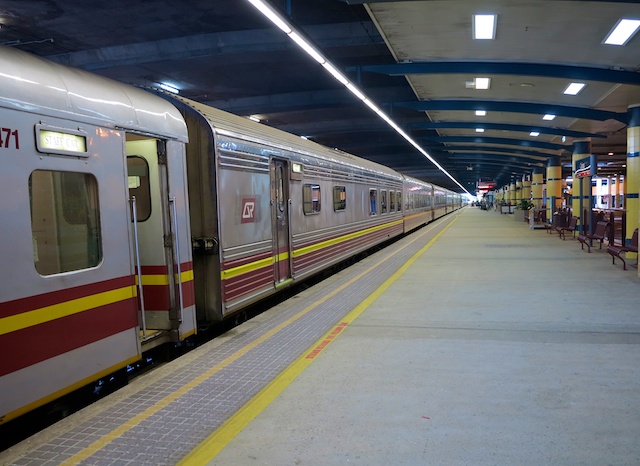 The long shiny train pulled in and our luggage loaded. We could only take a small carry on bag into our sleeper cabin. They were too small for suit cases. 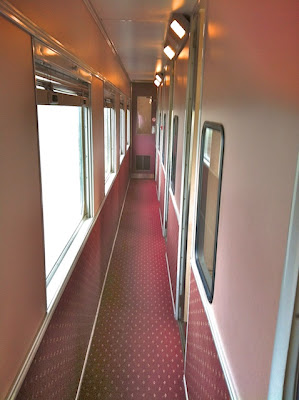 We were taken to our cabins by the hostess and given information on procedures and then we explored the train. At the end of the corridor there were the toilet and shower. There was a wash basin in our cabin. We continued through the cars until we came to ............. 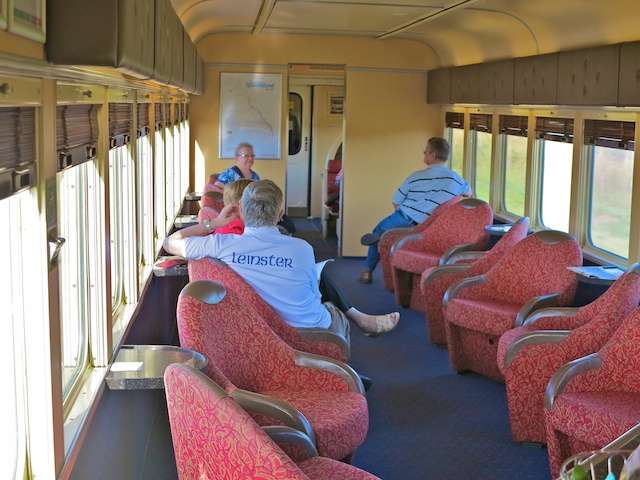 the lounge car. Where we spent most of our time watching the scenery roll past and meeting other travellers. This couple were from Ireland. At one end of the lounge car there was a bar and at the other end a place for......... 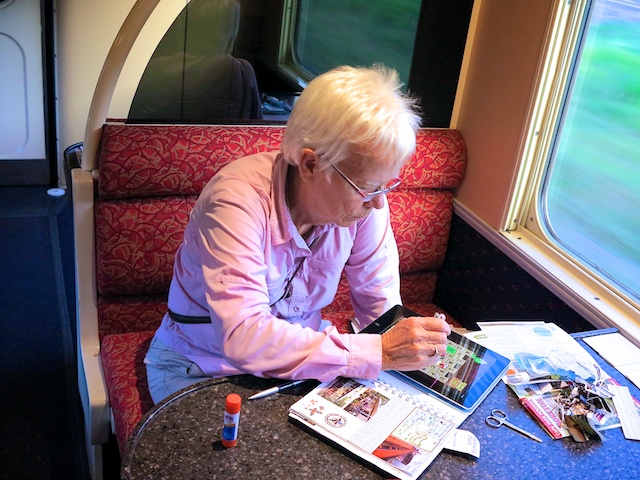 writing up your journal or playing games. I'm doing both!! 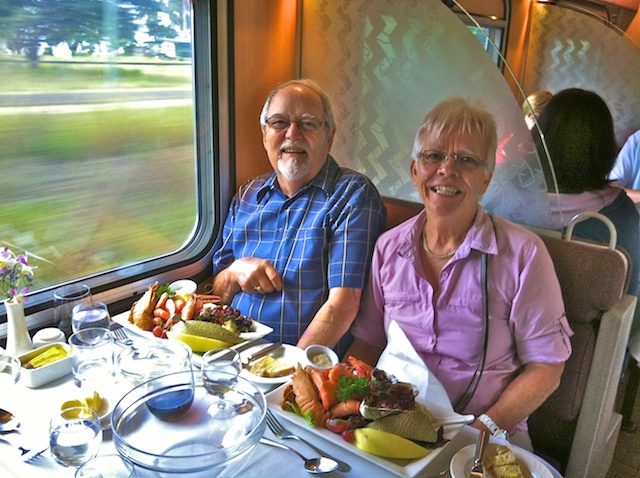 After the lounge car was the dining car and what a feast we had there. Our first meal was a seafood platter, fresh from the coast that we were travelling along. 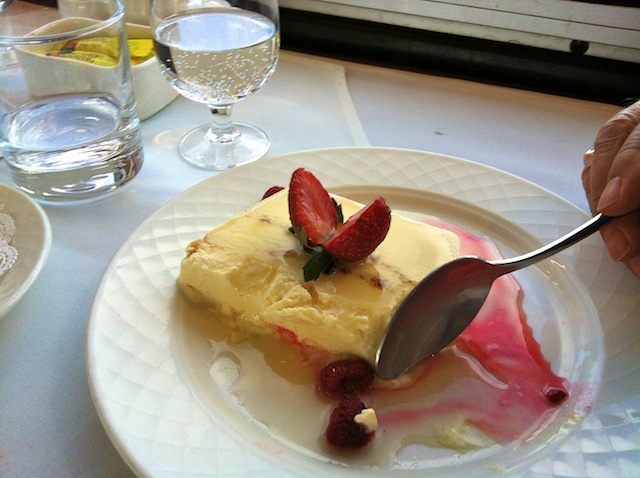 All the meals were delicious. 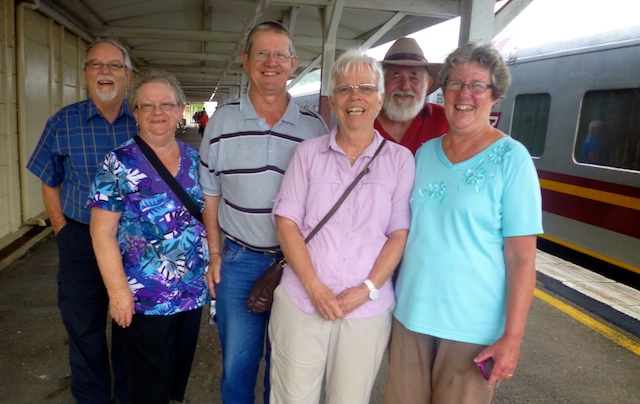 The train stopped at a few stations on the way picking up and dropping off passengers. We had made phone contact with Birthday Bear friends, Chris and Bob, who are travelling around Australia. They met us at Tully, one of the stops and we had excited hugs and chats for the short time the train was in the station. 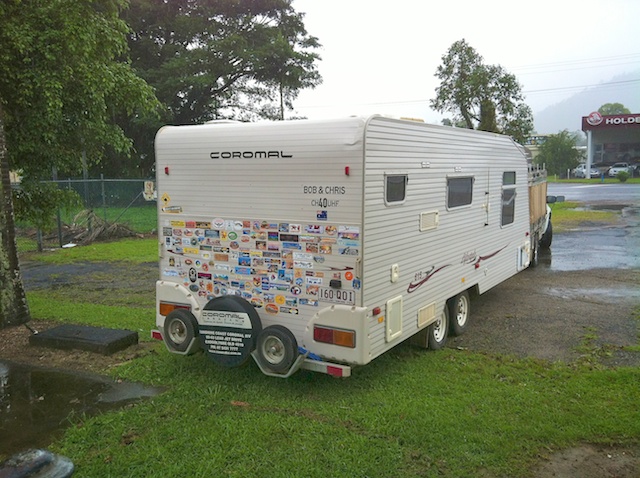 They had their van with them as they were on the way to their next stop. 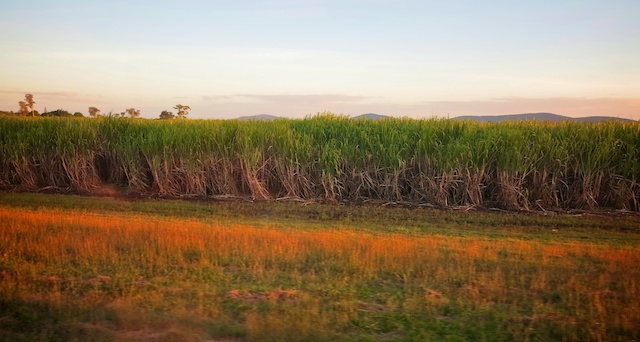 Then it was back on the train riding through acres of sugar cane, eating another scrumptious meal and playing games before bed. When you return to your cabin the beds have been made up. The seat converts to a bed and a bunk folds out of the wall. TOH had fun trying to climb up the narrow ladder and over the safety chain to stop him falling out. He even had more difficulty getting out in the morning. He was swearing and I was giggling. 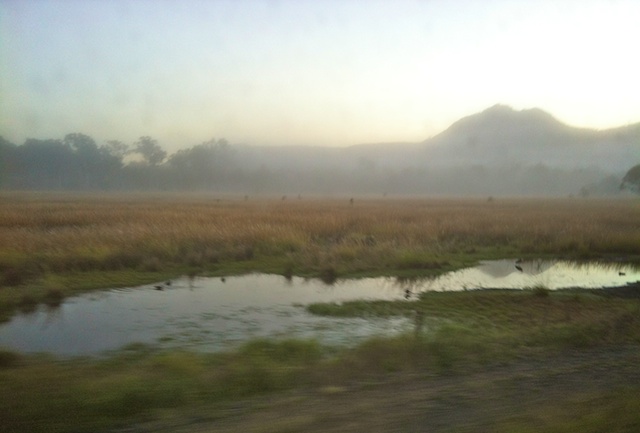 The scene out of the window in the morning was misty and romantic.

After breakfast we found ourselves passing Gladstone and its huge aluminium smelting works. It is where the bauxite comes that we saw being mined in Weipa way up north. 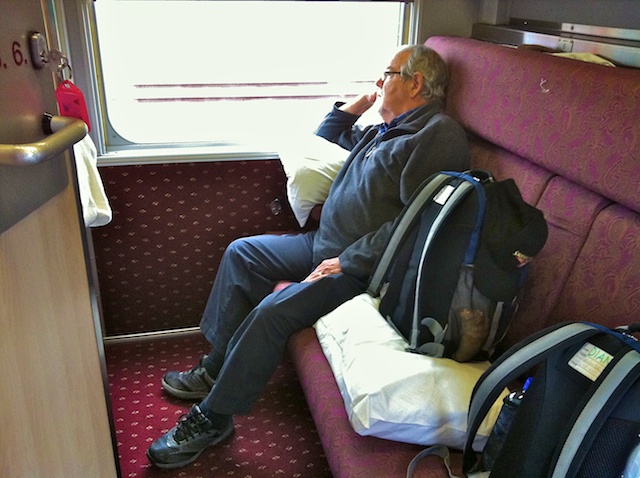 After a morning of lounging around, reading and chatting it was lunch, yes more yummy food. Later we returned to our cabin,  packed up and looked forward to the welcome sites of Brisbane. 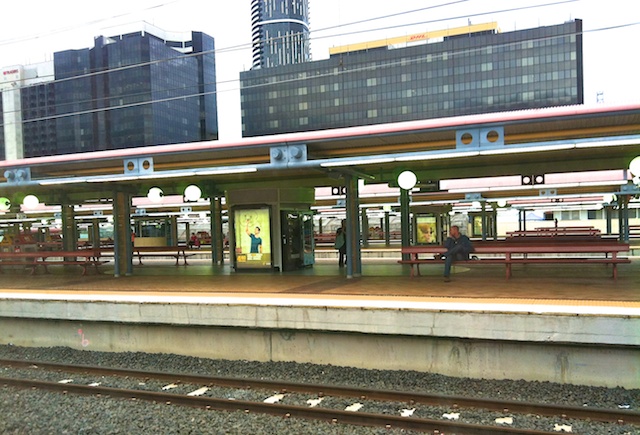 At last we had arrived. Ann's daughter picked us up. The weather wasn't the best but our own bed was a welcome. So ended another great adventure before dementia.
Posted by diane b