WE MADE IT TO THE TOP

This was the day I had been looking forward to for some time. The day that I could tick off "Tip of Australia" from my bucket list. We drove for 34 k on a narrow, rugged red road lined by a variety of different forests. We had a roller coaster ride over huge corrugations, pot holes and creek crossings, it was rough. We were entertained by Adrian, a fellow passenger. It was his turn to sit up front with the driver. He had the mike and was hilariously funny.  He was"helping" drive by calling out where the pot holes were but he kept telling us that the driver was purposely driving into the holes.(He wasn't really Chris was a very good driver).

One hopes you don't meet another vehicle. We actually met three in a convoy but the drivers use two way radios  to help manoeuvre into a spot where they can pass. 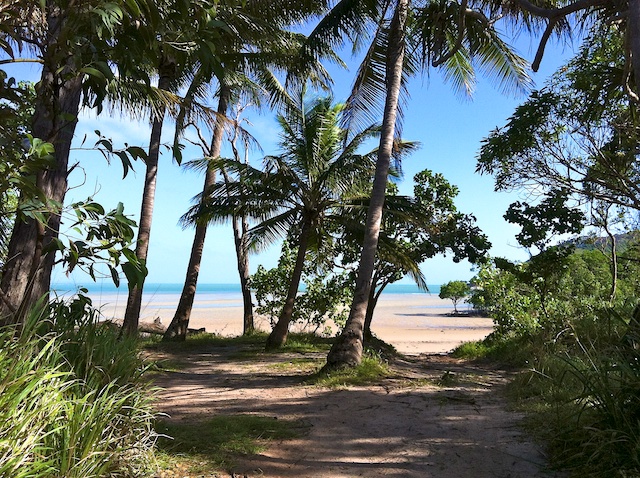 The road ended at a small car park and we had to walk the rest of the way. There are two ways to get to the tip; along the beach at low tide or over the rocks. 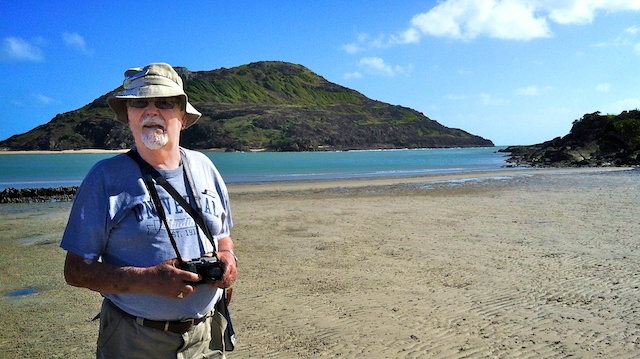 We tried the beach route first but we couldn't get through as rocks had blocked the path and the tide still hadn't gone out enough. 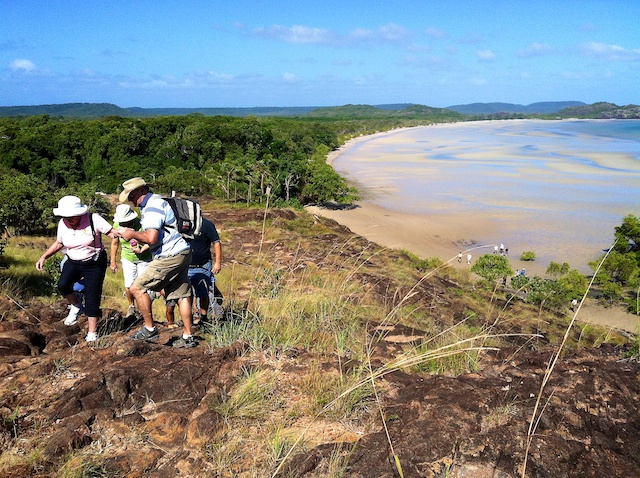 So back we went and up over the rocks we scrambled. 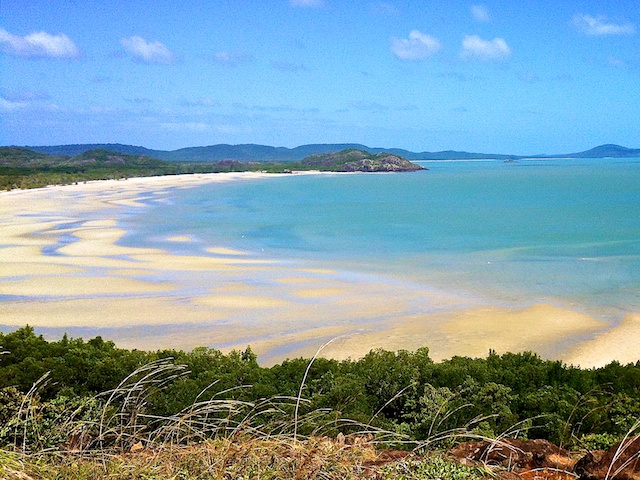 Looking to the west over Frangipani Beach was spectacular. 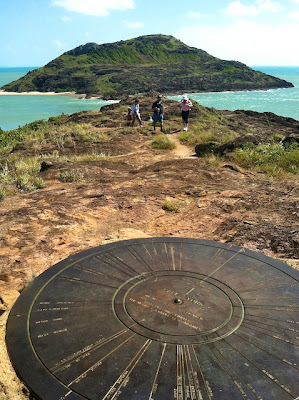 It wasn't long before we could almost see "The Tip".
The mainland stops but an island is right opposite the tip. You can't see the water in between yet. We have to get closer. 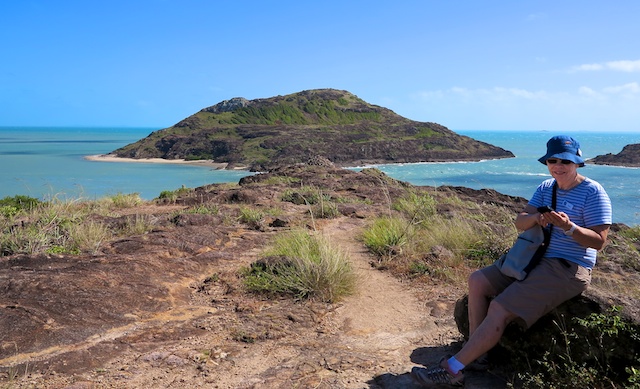 We waited here for everyone to catch up. I was so excited to be here.

The northern most tip of the Australian mainland. There are many many islands in the Torres Strait between Australia and Papua/New Guinea, which belong to Australia.

I am holding the 'stolen' cup from the Bullock Creek Cafe. We were asked to take photos of it in interesting places and post it on their website. 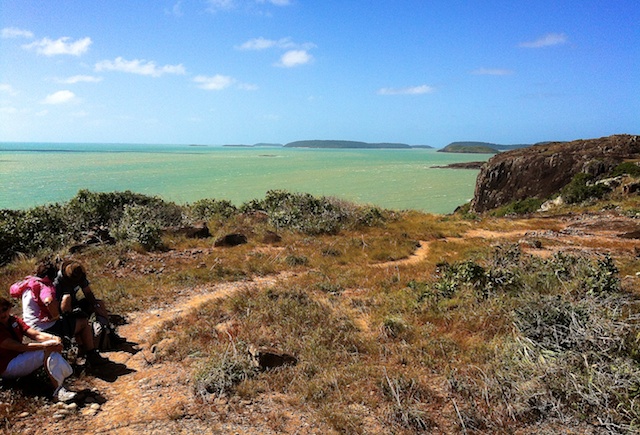 After everyone had a photo taken and a wondrous look around at the lovely scenery we clammbered up the hill and over the rocks back to the bus. 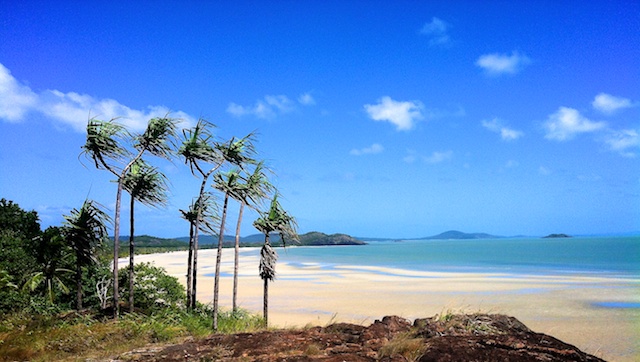 The wind had become very strong and it wasn't an easy walk back trying to hold your hat, camera and keep balance but it was great fun. I loved every minute of it. 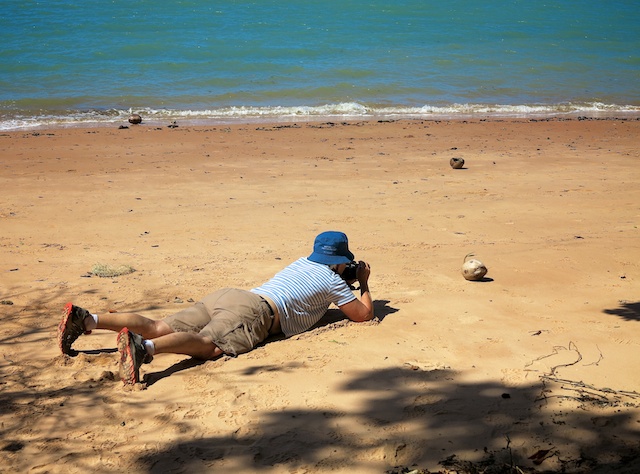 On the way back we stopped for a picnic lunch at Somerset Beach. I asked TOH to watch for crocodiles while I tried to get a low down shot but instead he thought it was fun to snap me himself. 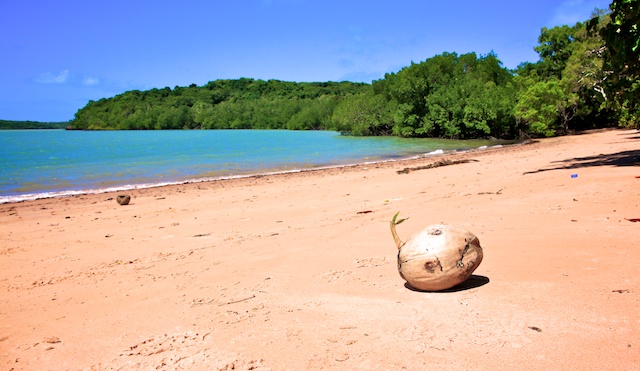 Somerset has a history. It was originally settled by the government as a northern outpost and defence base but it was unsuccessful due to the lack of a suitable harbour as all supplies were brought by ship. The settlement was moved to Thursday Island, which was the next place on our itinerary. 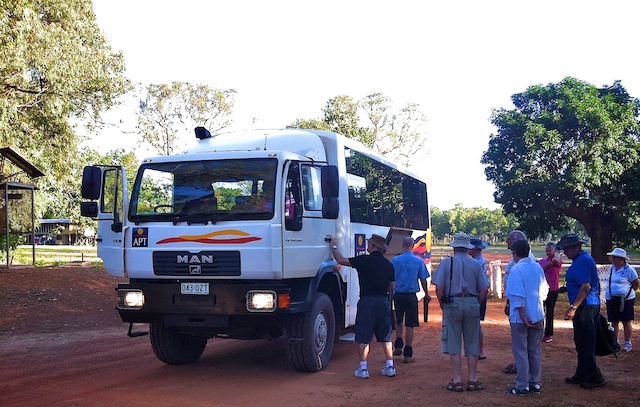 Each segment of the trip passengers took it in turns to sit up front of the bus/truck. This shot was taken at Moreton Station but I just wanted to show you the bus. 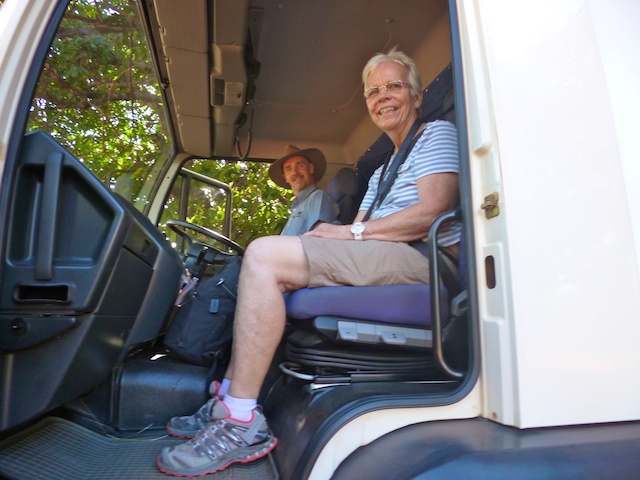 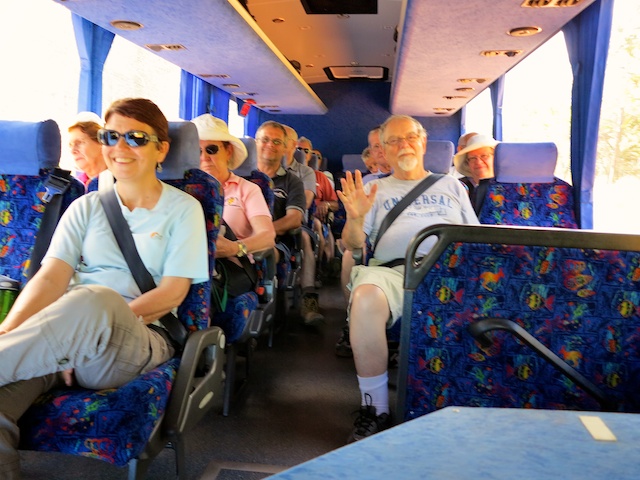 I turned and took a shot behind me through the hole between the truck and the cabin. 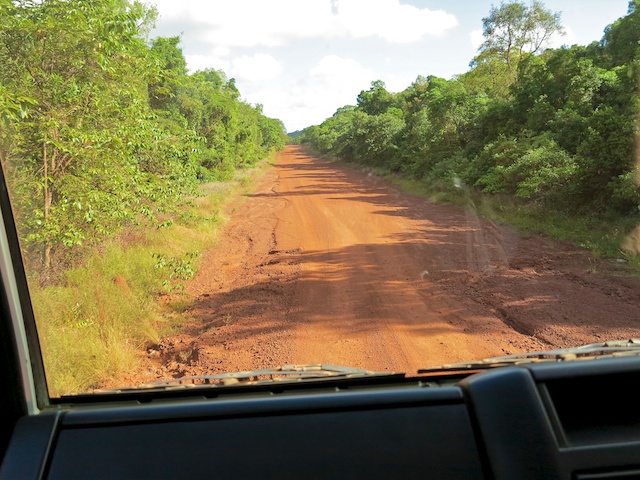 It is even more bumpy in the front but at least you can see the holes you are about to fall into.
It was a fabulous day!

Email ThisBlogThis!Share to TwitterShare to FacebookShare to Pinterest
Labels: Cape York, FNQ, Somerset Beach, The northernmost point of the Australian continent, The Tip