This weekend was a holiday weekend for our national day Australia Day. It is also the last weekend of the school summer holidays. Hundreds of holiday makers flock to the beaches and camping grounds. However, brewing up north just off the coast was tropical cyclone 'Oswald". It developed into a huge low pressure storm which came down the east coast of Queensland dropping a huge amount of rain flooding all the creeks and rivers and northern towns. Then it came further south to central Queensland and stalled over the town of Bundaburg where 7 tornadoes developed and ripped the town to shreds. Many homes and a few lives were lost.
The storm slowly picked up again and headed towards Brisbane flooding rivers and towns on its way. I can tell you I was a bit worried about those tornadoes which develop fast and give little warning. The holiday makers clogged the roads in their effort to get home before the extreme winds and rain hit.The wind and rain blew for three days. It has started to clear now.  However, flood waters and high tides are causing the Bremmer River and Brisbane River to flood again like they did 2 years ago. Although we have been told it wont be quite so bad because water has been pumped out of the dams for the last week. I feel sorry for those who were flooded 2 years ago and have just had their houses fixed and now it comes again. Meanwhile the storm has gone on its way to Sydney, leaving a trail of destruction behind it.

We were relatively lucky as we don't live near creeks or rivers but on the side of a hill which seems to protect us a bit. We did have a tree fall down and broke our washing line but luckily it missed the house. The damage to businesses, houses, cars and roads is unbelievable. The heroic rescues are unbelievable. I guess many of you have seen television reports but here are a few of my photos and a couple from the news media which really tugged at my heartstrings. 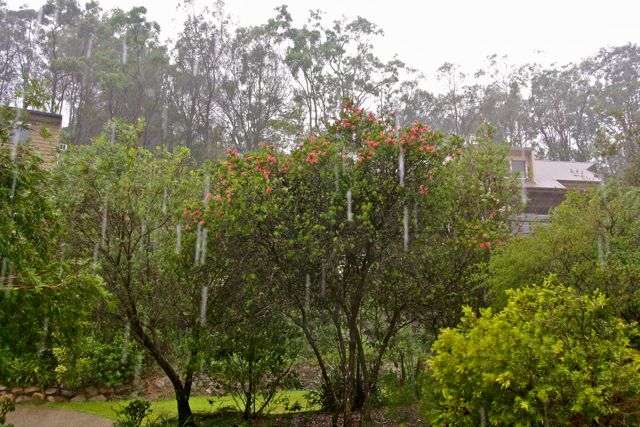 At first it just rained and rained heavy tropical rain. 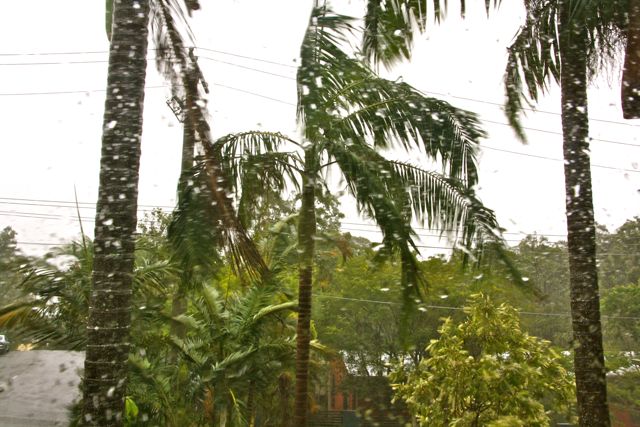 The next day the buffeting winds started. All these shots are taken through the windows. 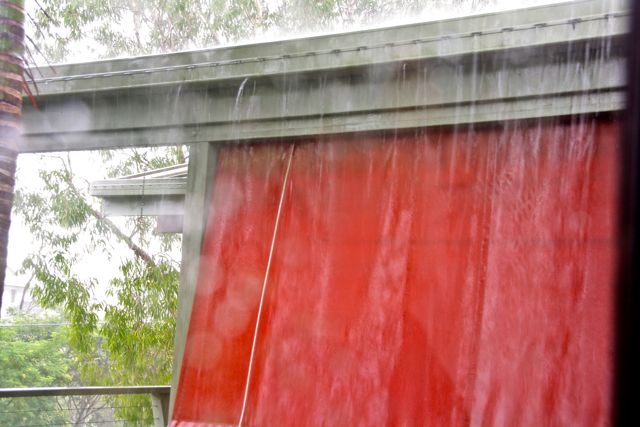 The rain is so heavy that the gutters can't cope with the volume of water and they overflow and surge down our balcony shade blind. 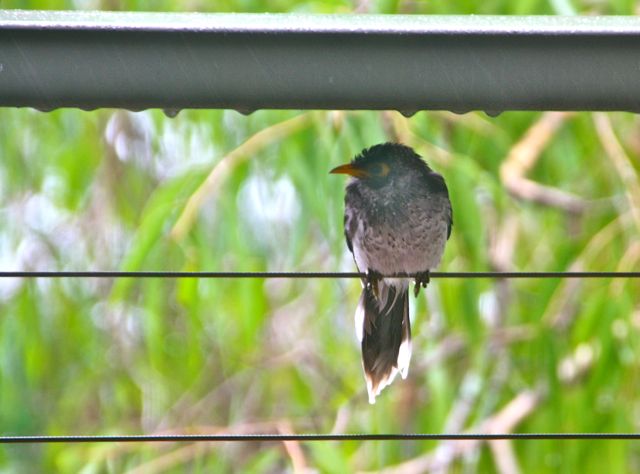 The poor birds are bedraggled and hungry from not being able to get out and forage. This one shelters under the balcony rail with drips coming off its tail.


On the third morning when I looked out of the window I saw a tree had fallen onto the washing line.It was an old tree and half was dead. I was intending to have it lopped but alas I waited dithered too long. Now I need a new washing line and clean up the mess. 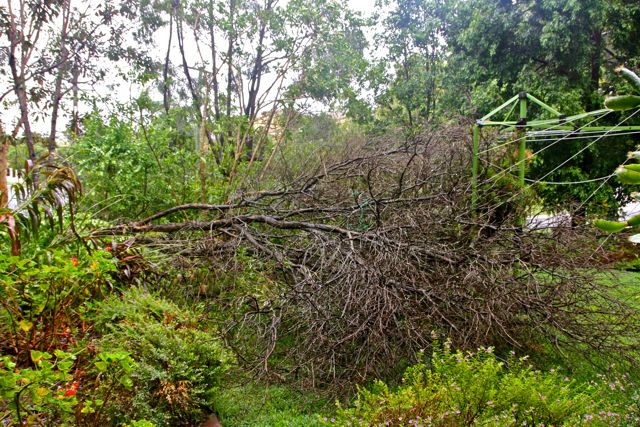 The rain eased for a few minutes so I went downstairs to investigate the damage. 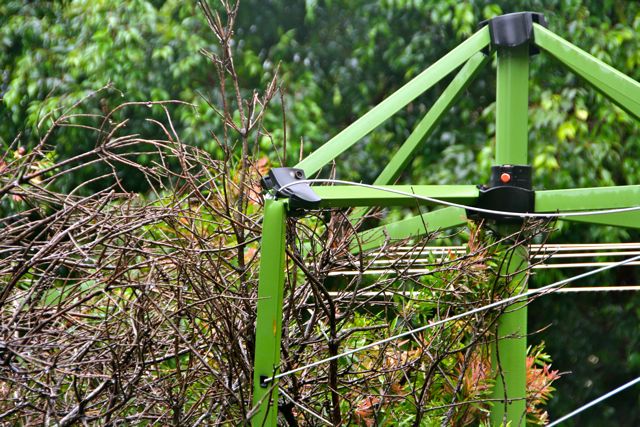 It had bent one of the steel arms of the washing line into a rightangle. 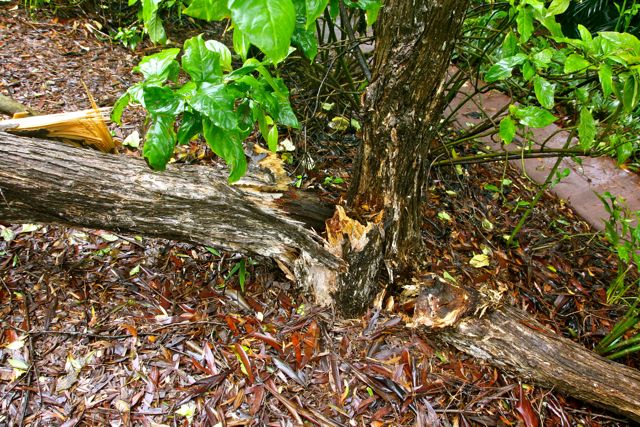 The bottle brush tree (Callistamen) had four trunks. One fell onto the washing line and one fell the other way onto the footpath two thin ones are still standing. 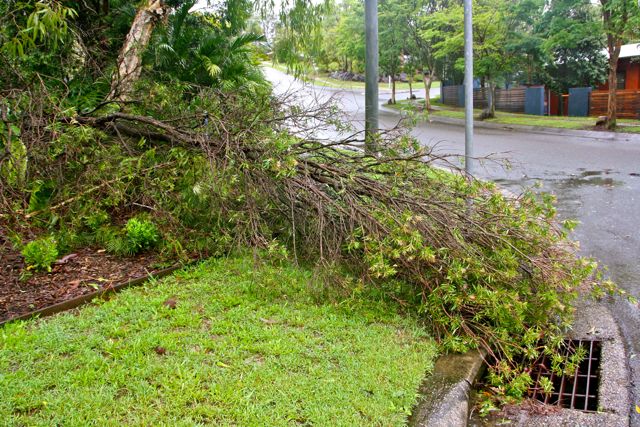 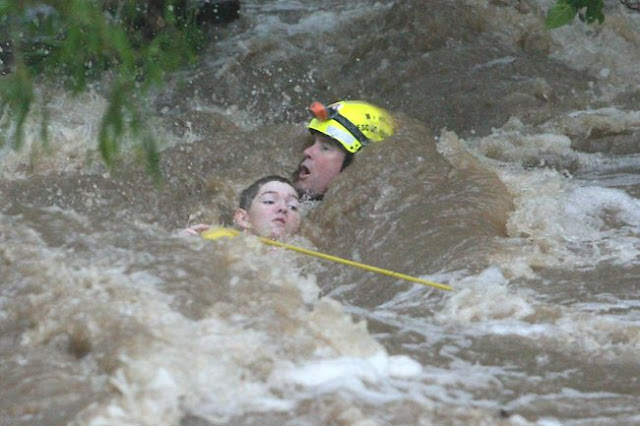 A young teenager decided to go for a swim in a swollen creek and nearly lost his life and that of his rescuer. This rescuer had a rope on and managed to get through the surging water to the tree where the boy was clinging. He grabbed the boy and only just managed to get him to helping hands but the water was so strong it was holding the rescuer under the water so he released his rope and let the river sweep him under a bridge and down stream . Luckily he managed to grab a rock and held on until colleagues hauled him out.

Two young women and a baby were stranded on a flooded road. The water rose rapidly and they climbed to safety of the tray of the truck. An amazing helicopter rescue took place. Because the baby was wet and slippery she had to be put into a waterproof bag which was zipped up and attached to the helicopter line to be lifted to safety.