THE OUTSIDE SHELL IS COMPETE 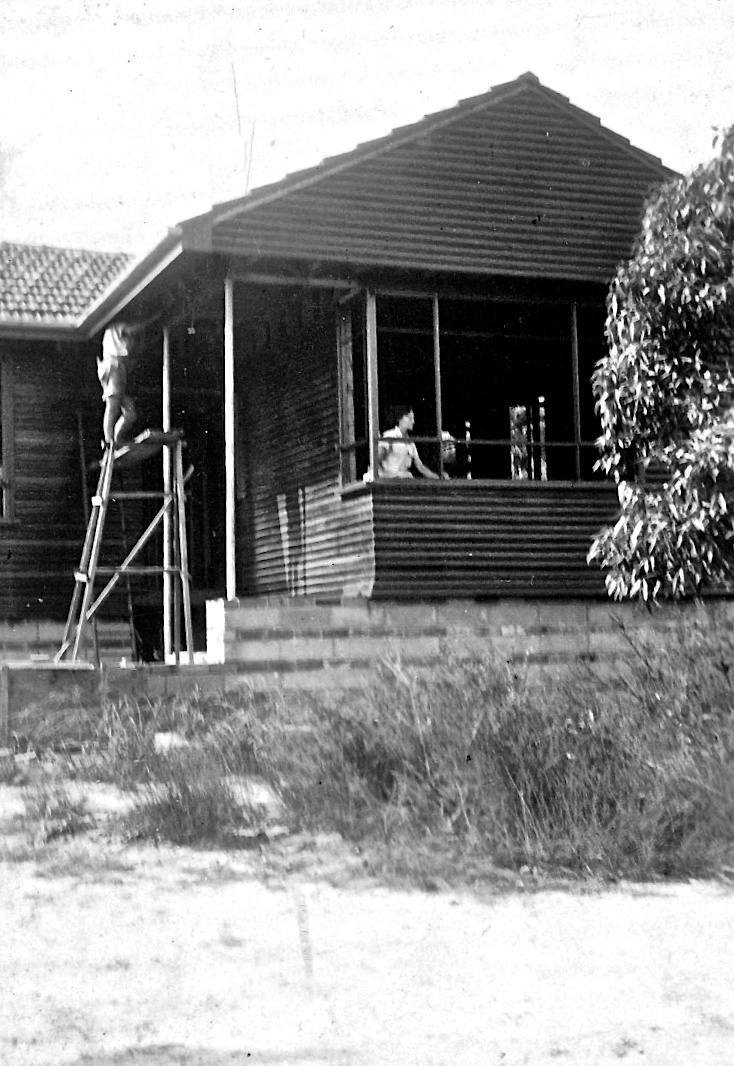 Like a lot of people, my parents kept their photos in a shoe box until they had time to put them in albums. When my Mum retired in the late 60's, she started to sort the photos and make albums. When she was writing captions she was having problems remembering the year the photo was taken so some of the next photos could be muddled but through sleuthing I'm sure most were taken in 1953.
We had been in Australia nearly 4 years. We had lived in a tent for most of 1949 and then in our garage since then. My Mum worked as a nurse and Dad as a telephone technician and truck driver. Every spare minute and every spare penny went towards building their house and life in their new country.
My Mum designed the house and they both helped build it. (Now their granddaughter designs the interior of commercial buildings) Mum wanted to have a light, airy, spacious feel to the house but she had a job convincing building inspectors that having big windows wouldn't cause the house to fall down. She won her case but then she had difficulty finding suppliers of large windows for domestic use. 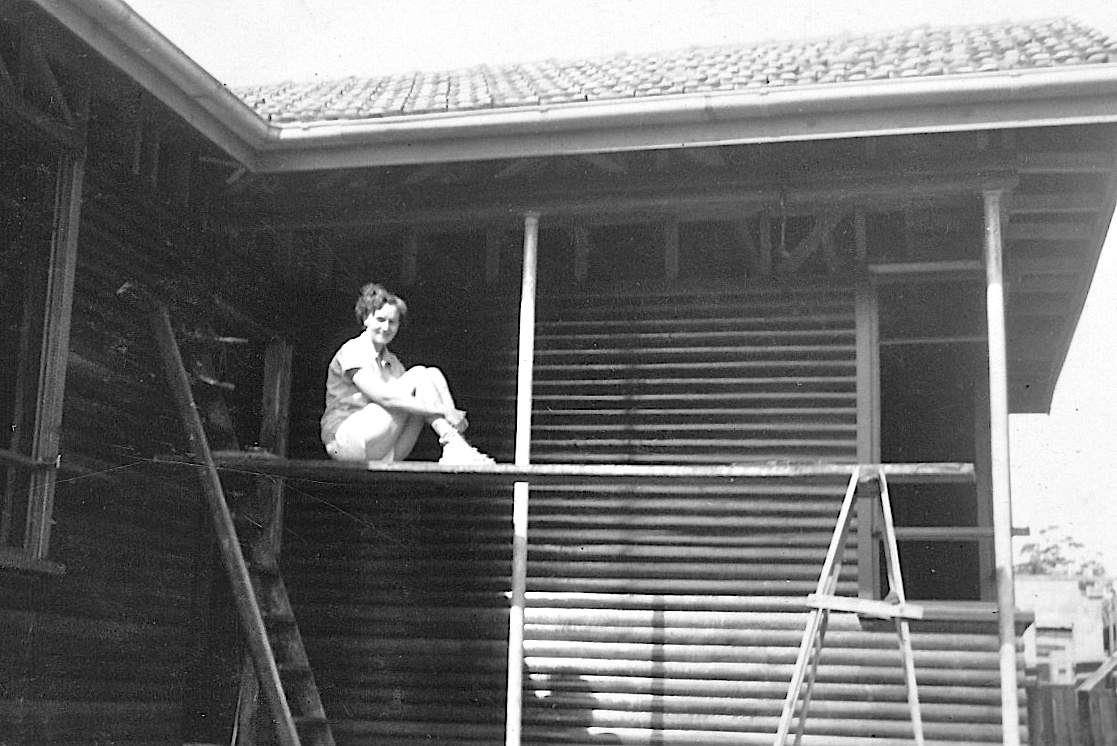 Mum taking a break from painting. 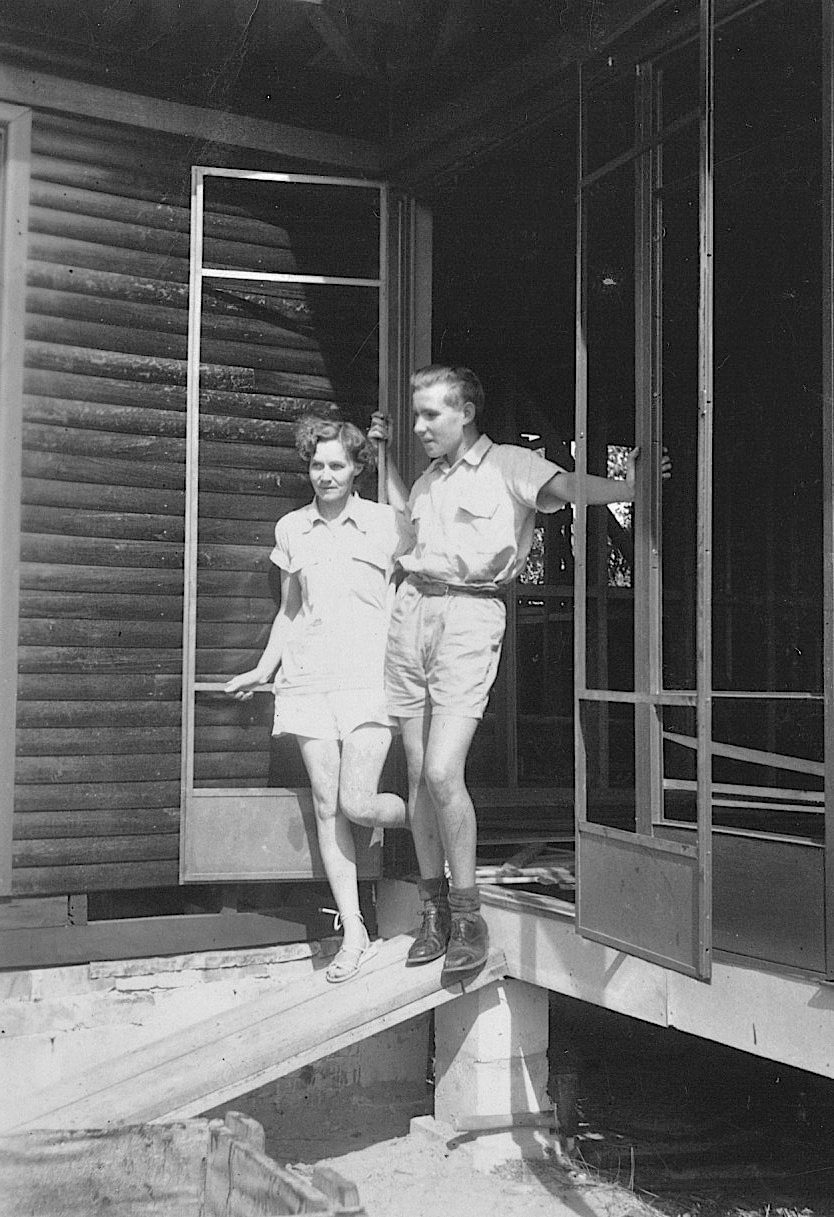 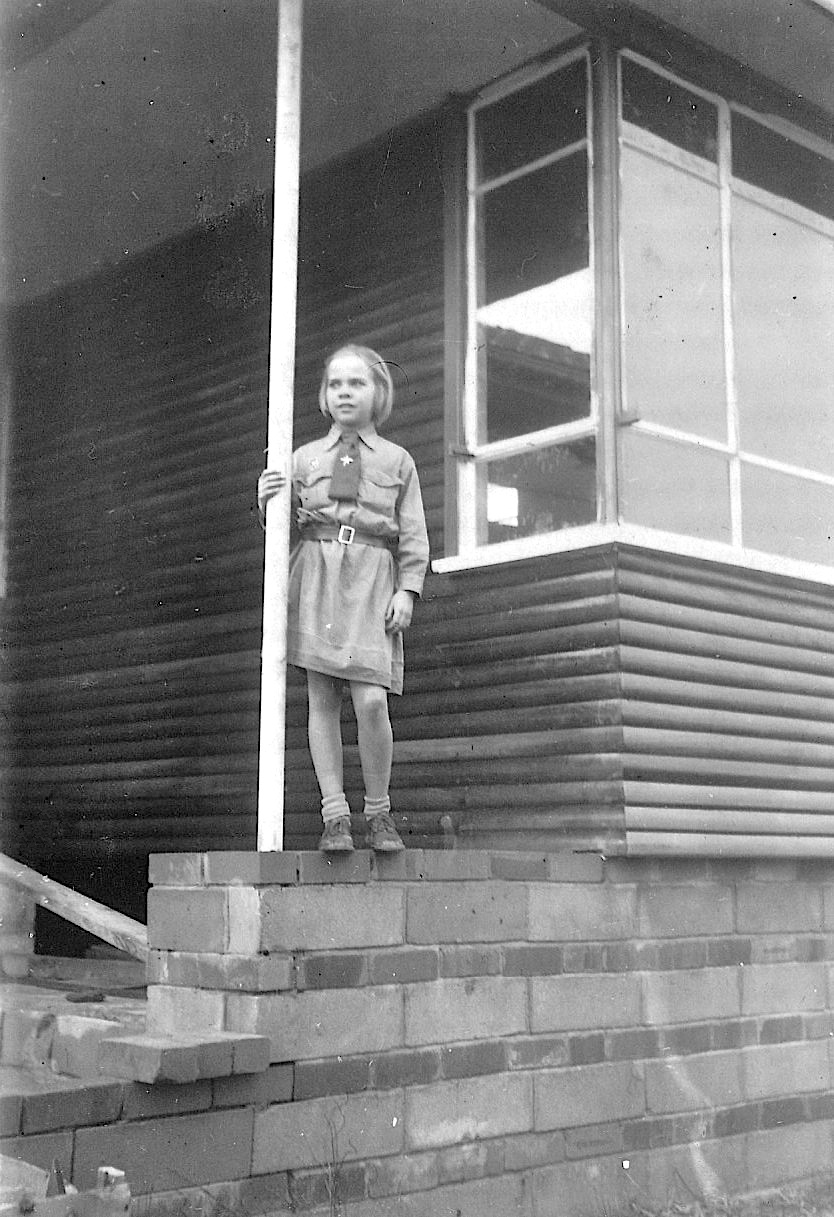 At the back of the house Mum had designed two walls of "French Windows" leading out onto a back patio. She had loads of problems getting suitable windows but finally had to settle on these steel framed industrial windows. My brother is now 15, taller than Mum and looking a lot like my Dad. He was busy finding after school jobs to enhance his pocket money. He delivered ice at 4 in the morning and did a paper run later. He was clever at school but also a rebel and was often in trouble with teachers.

Although my parents were concentrating on getting the house finished they always had time for me. I joined the Brownies, I had swimming lessons, I had tennis lessons, I rode my bike everywhere and was allowed to visit friends. My friends and I used to play in the "Australian Bush,"go hiking down to the creek, go swimming and catch yabbies. It was a great childhood. I became independent and tough. 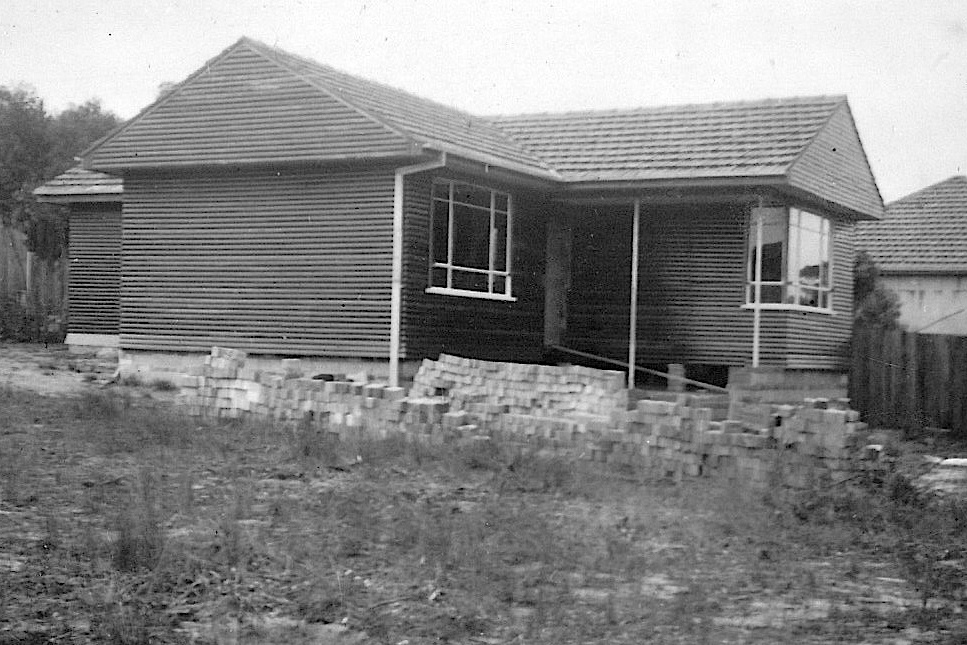 During 1953 the shell of the house was finished but the front and back patio had to be concreted, all the interior walls and fittings were yet to be done. We were getting excited. At least it looked like a little house now. (One of the nicest in the street.) 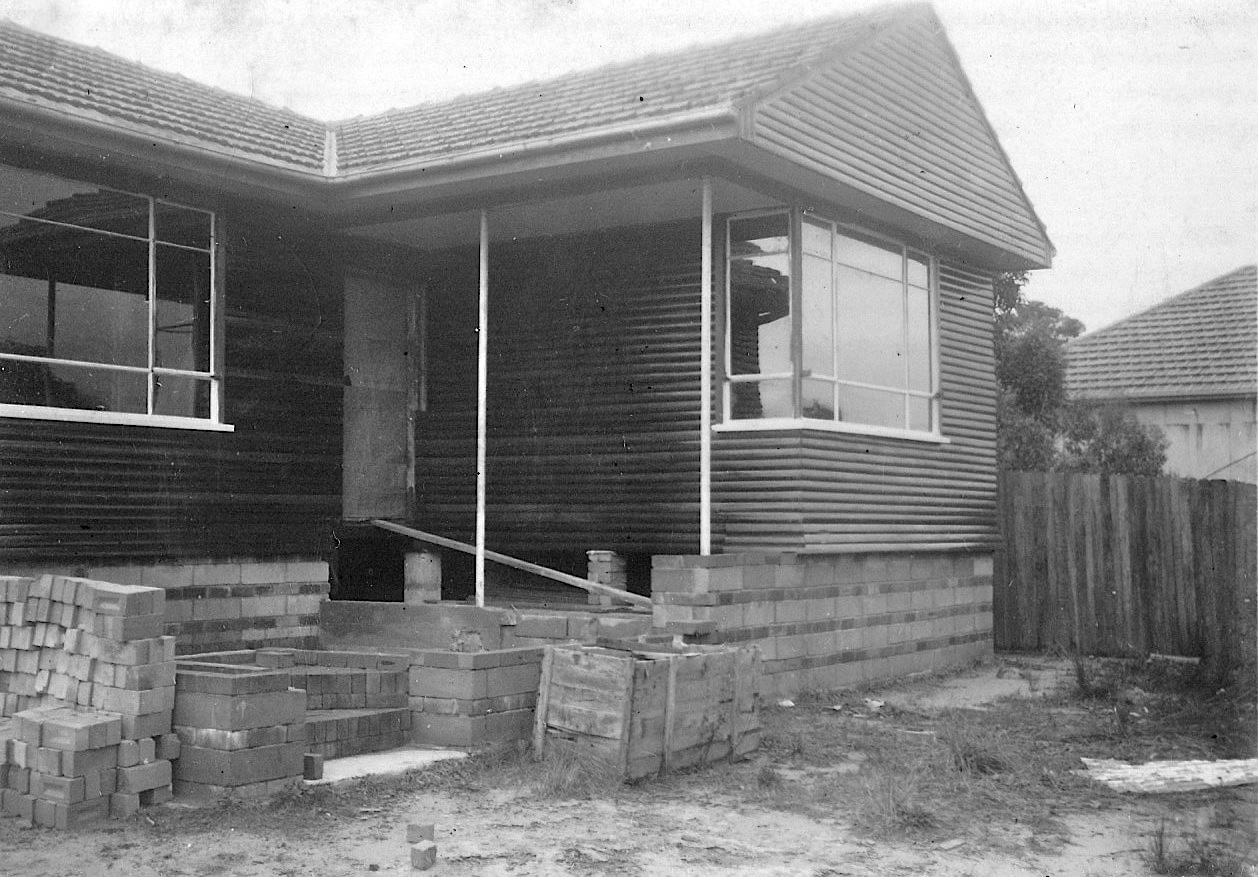 Mum wanted a glass door. No one could do that! Work in progress on the front steps and patio. 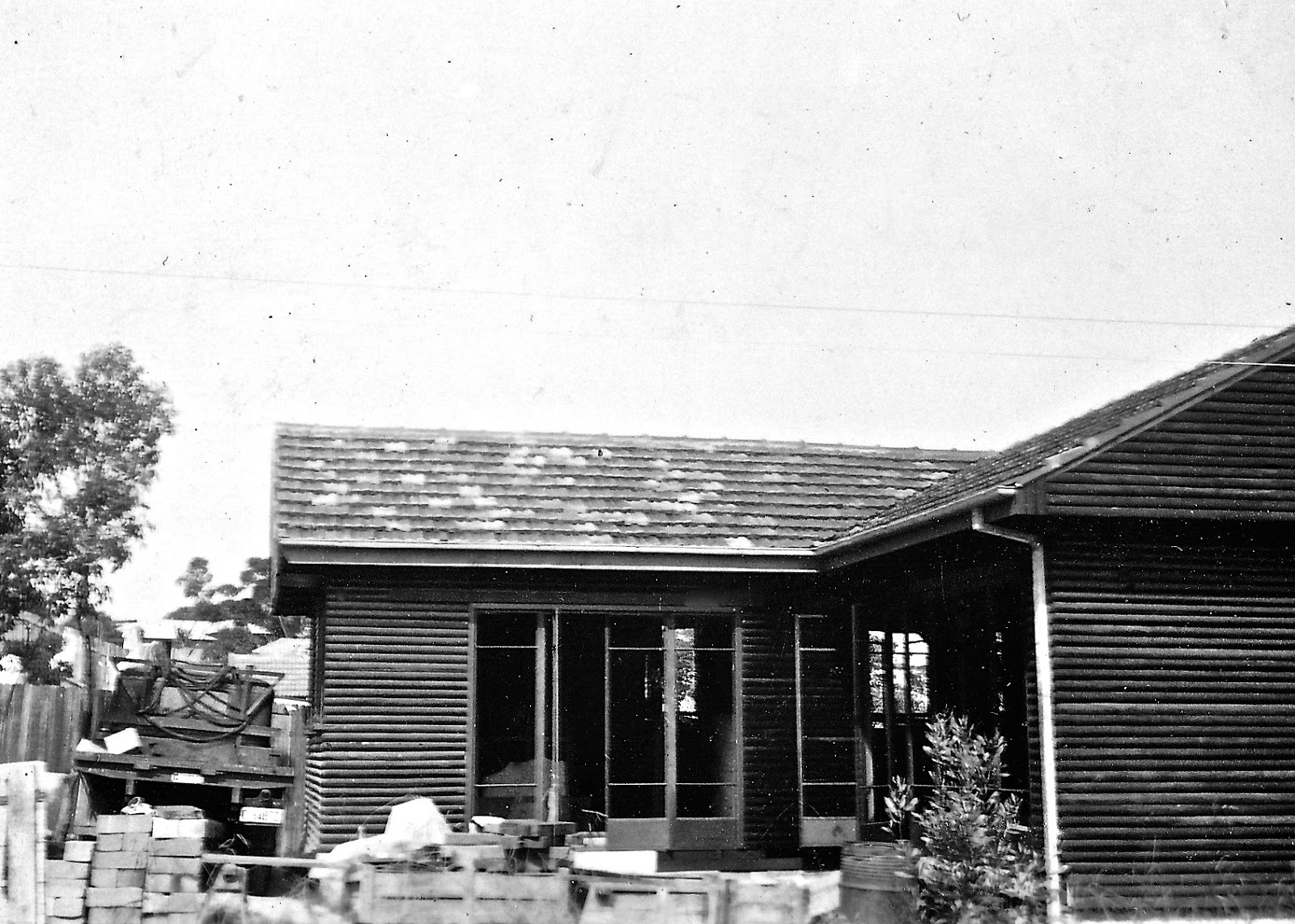 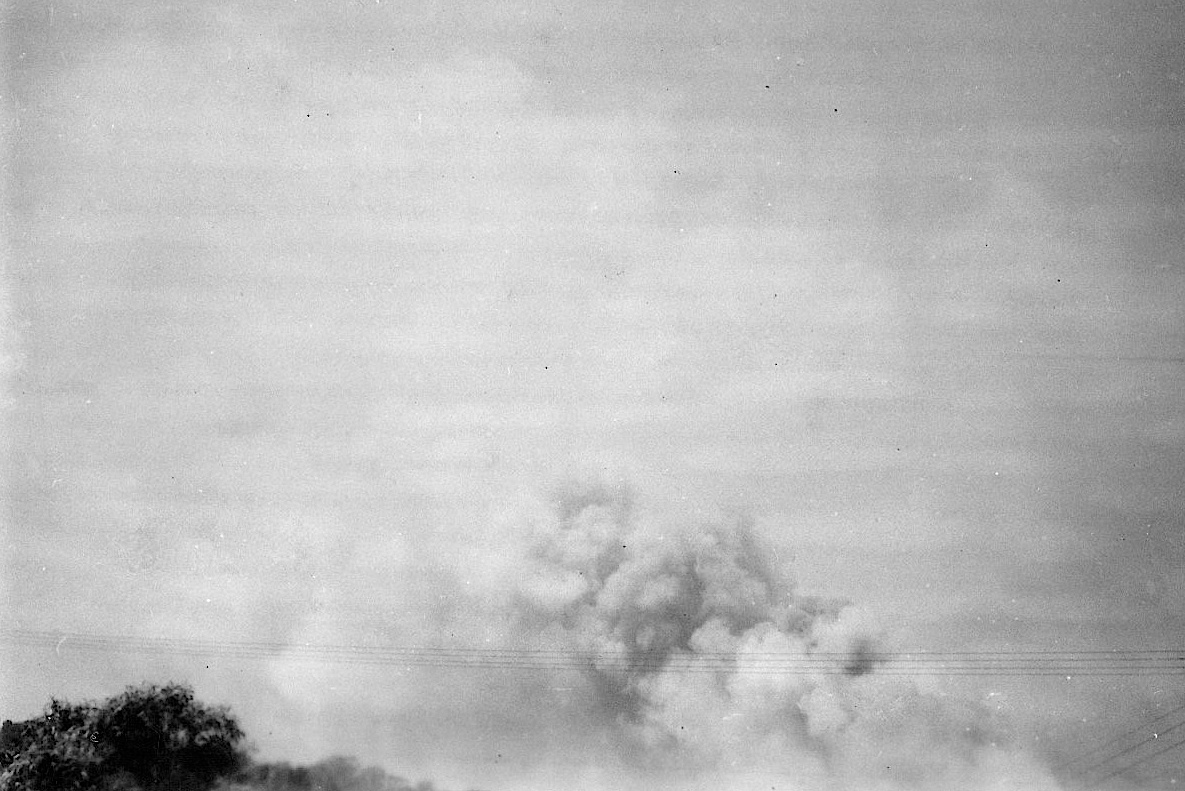 Every year there was the threat of bushfires. In 1953 they came very close to our village of Loftus. The sky turned a yellow-grey haze, and a mountain of billowing black smoke with a red tinge crept closer to us. We were sent home from school and had to walk because the trains had stopped. Adults were sent home from work. Dad passed us in the truck and stopped. We all piled on the back and Dad delivered the kids to their homes before rushing home to turn the hose on and spray the house, the house he has spent 4 years building nail by nail. The above photo was taken from our unfinished lounge room. I had to stay inside but I watched my parents, brother and neighbours soak hessian sacks in water and go down the road a little way and beat out the ember fires which were starting up everywhere. Firefighters came with knapsacks, full of water and they were pumping a spray gun which seemed a little futile against the fury of the fire fueled by the wind. Luckily with the help of the wind changing direction and losing momentum, by night the fire was beaten back and our house was safe. 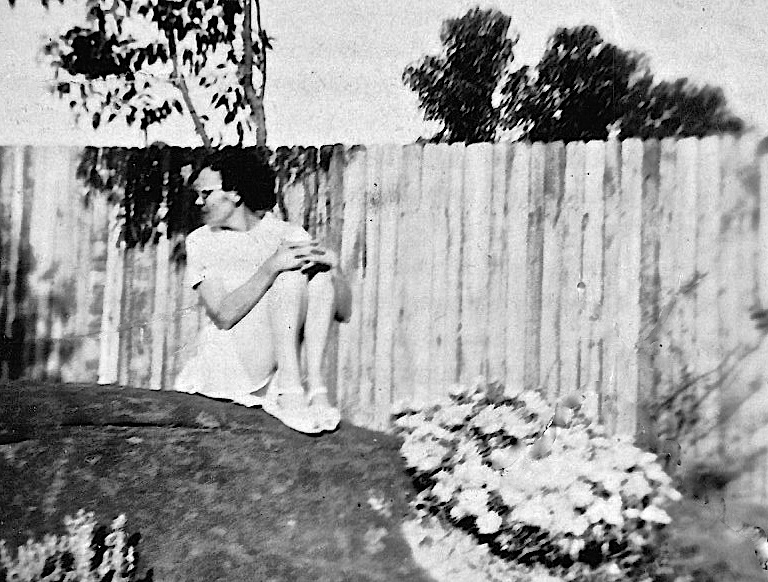 Besides house building, Mum spent a lot of her days off work clearing our land and establishing a garden. She loved the natural rock seam that ran across our land and she turned it into a nice rockery. Over the years she had it looking beautiful. We also had a pet family of Blue Tongued Lizards living under the rocks. She was unhappy with the neighbours building an ugly paling fence between our properties. She would have preferred a natural barrier of trees and shrubs. 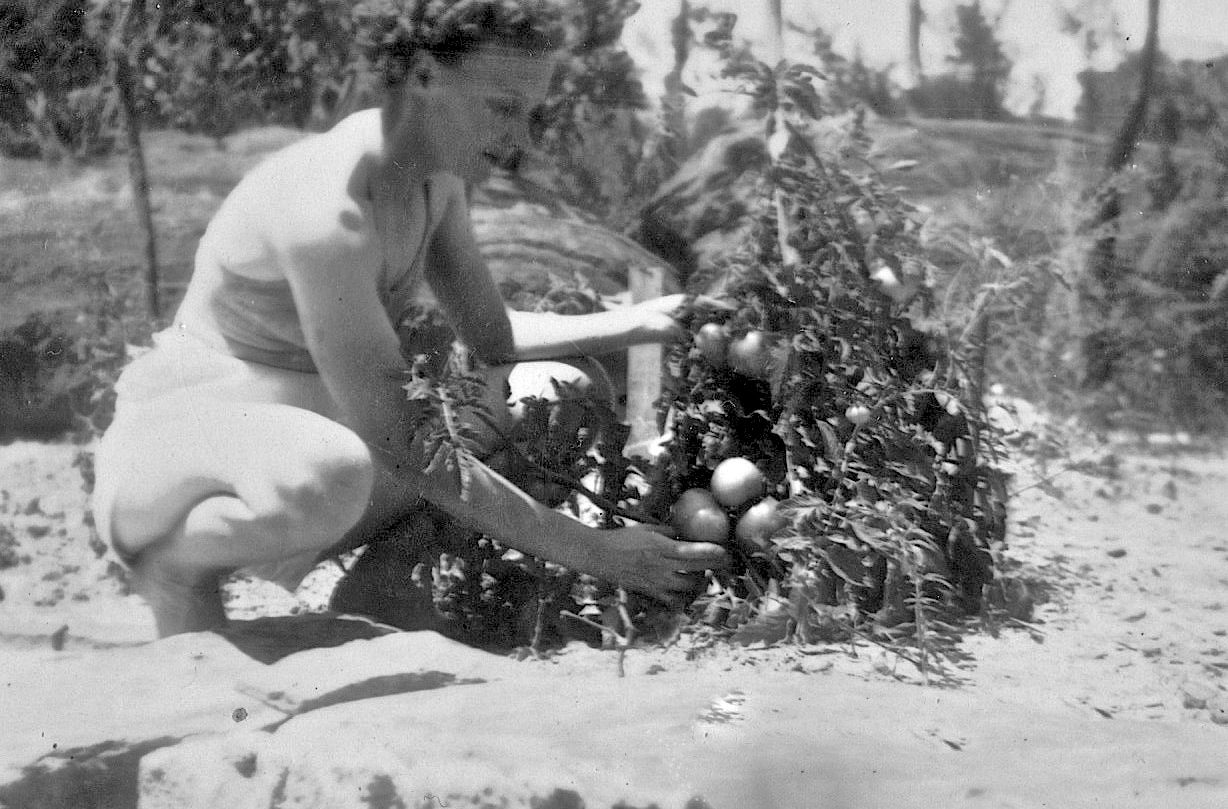 Mum also tried her hand at growing vegetables but the soil was very poor. However, the tomatoes survived. 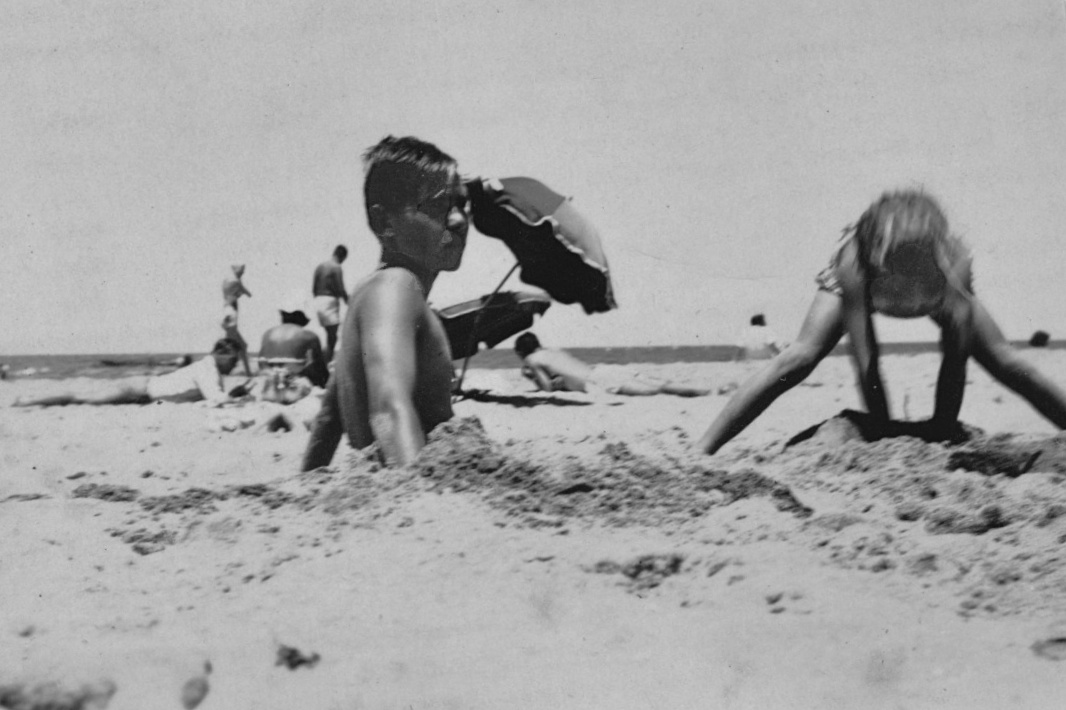 In the school holidays my parents took some time off building to explore our surroundings. In 1952 we went with friends by car through The Royal National Park to Wattamulla Beach. David and me playing in the sand. 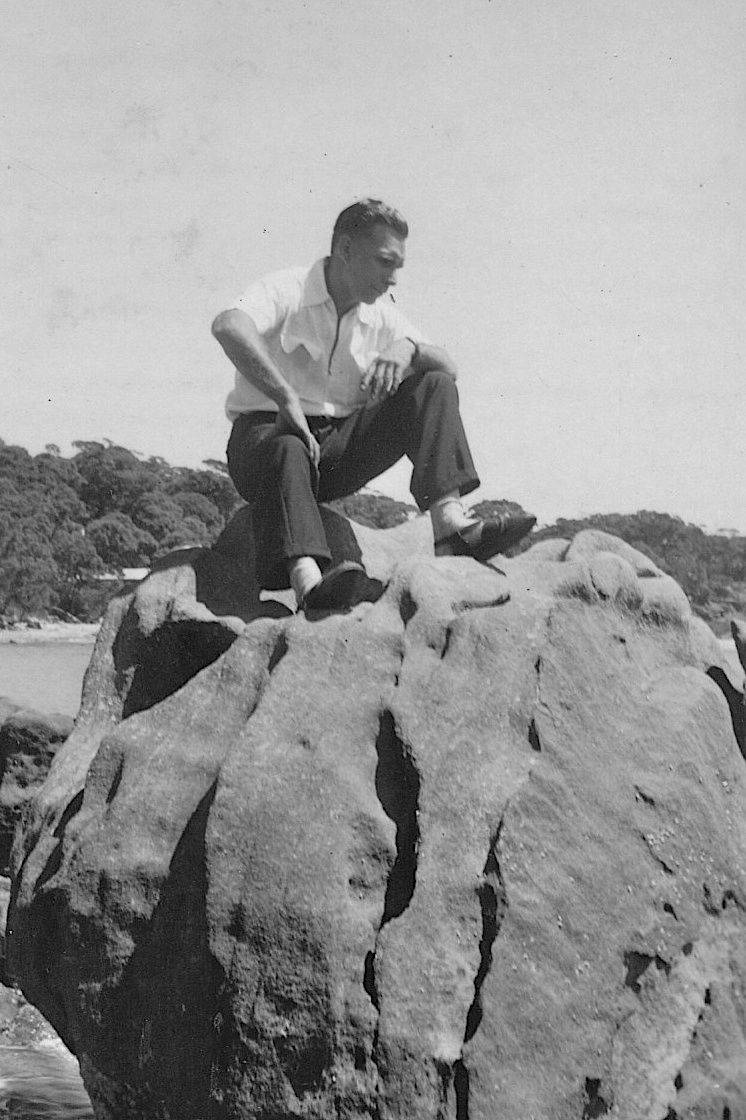 Another time we went down a very steep winding road to Woronora River, a tributary of the George's River, for a picnic and a swim. This is Dad on top of 'Cathedral Rock' having a rare moment of relaxation. 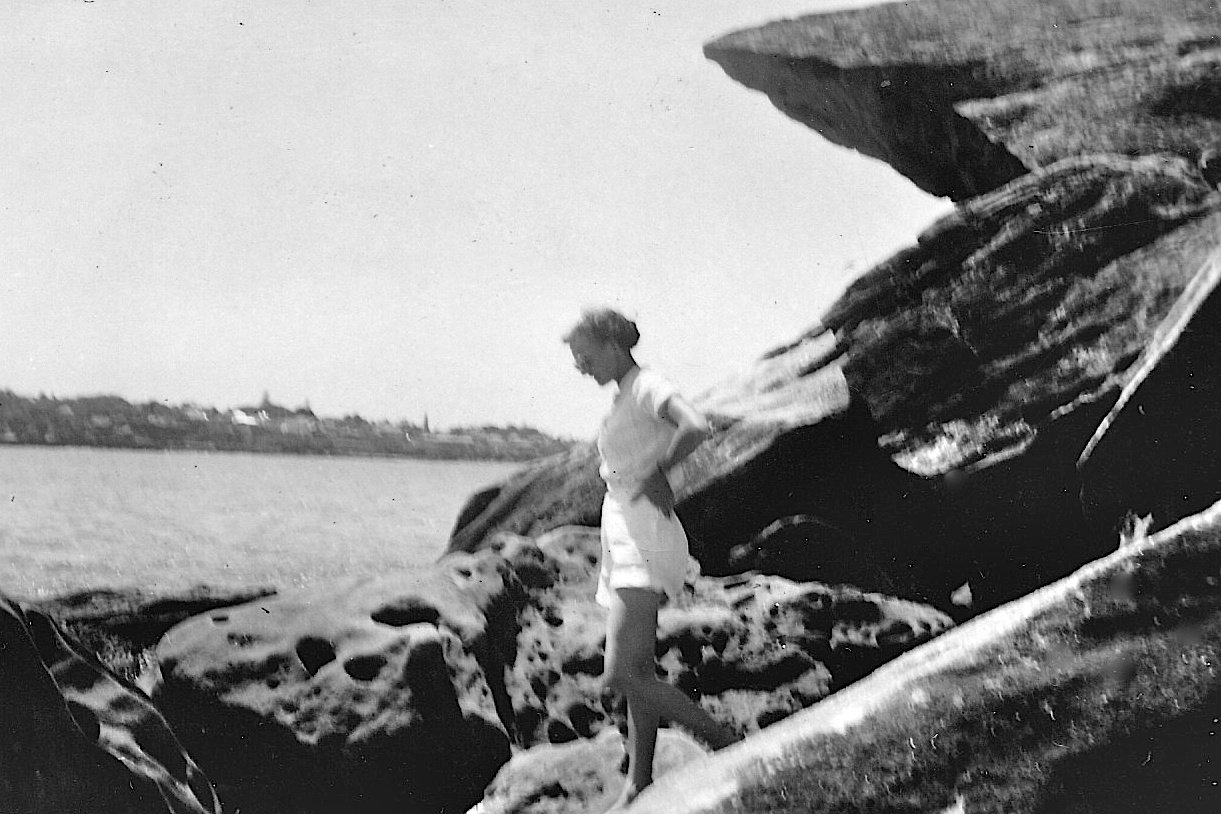 Another day we caught a train and ferry to Bundeena Beach in Port Hacking. Mum enjoyed exploring the beach rocks. All these places were close by on the southern outreaches of Sydney. We had all fallen in love with Sydney. Mum and Dad made it their home forever but not their children. 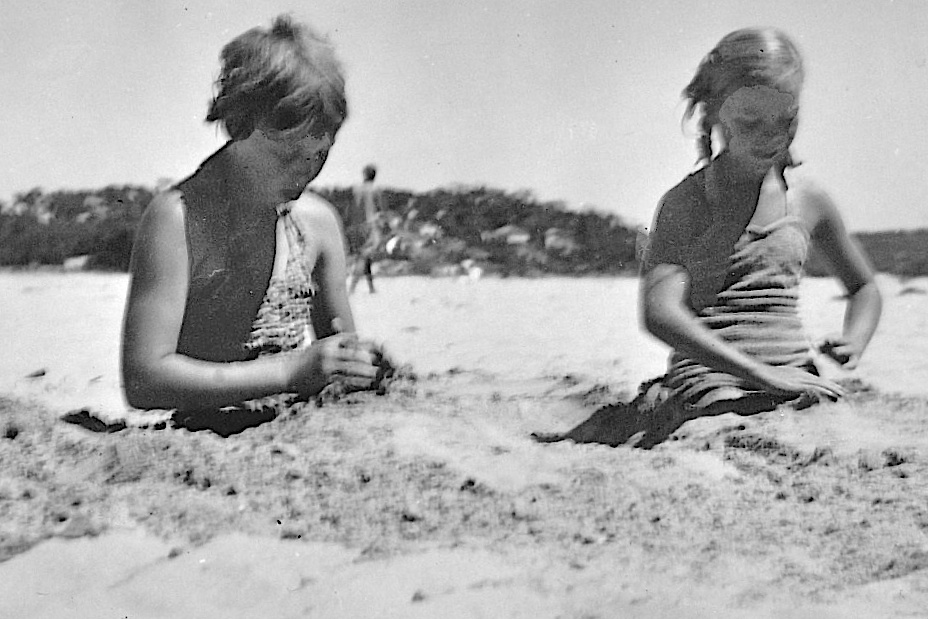 I had made friends with a girl called Kerrie. We became very close. We had sleep overs at each other's houses (when they were finished). We went to the same school and Brownies. We spent many weekends together cycling in the National Park and canoeing. We caught the train to Cronulla Beach often, played tennis and went to the pictures together. Our friendship lasted into our twenties then we lost touch for many,many years. A few years ago I managed to find her and couldn't believe that she was living quite close to Brisbane. So we went to visit her and it was an exciting emotional reunion. We have developed along very different pathways in life but we still have that very close bond that we developed as kids. I believe my friendship with Kerrie and her family taught me to be a true Australian. (Kerrie is on the left)
Posted by diane b

Email ThisBlogThis!Share to TwitterShare to FacebookShare to Pinterest
Labels: My Story, Settling in Australia