(Continued from here: A Jumbo Drama in New York)

After we were married in  Papua/New Guinea in 1969 we left the country intending to live in Switzerland. We travelled via New Zealand, Hawaii, USA, Toronto and London. We picked up a new car in London and drove through France to Switzerland. Bill was getting very excited about seeing his parents again while I was getting nervous at meeting my in-laws for the first time, especially as we weren't able to understand each other.

For the last year I had been so excited about going to Switzerland. It was one of my teenage wishes to go skiing in Switzerland and here I was just about there. Luckily, I have a diary and a few photos of this trip.

We drove all day through France. Bill was in a hurry now. We got lost trying to get through Paris at peak hour. Luckily Bill could speak French and asked a policeman which way to go. No GPS in those days and the road map looked like spaghetti. Eventually, we were in the beautiful French countryside and we pulled into the small town of Avallon for the night.

The next day we found our way through the back blocks of France to Nuchatel on the border of Switzerland where we had planned to meet Bill's parents in a restaurant. We had lunch together and I felt a little under scrutiny from the in-laws but they seemed very happy to have us in their homeland. Bill had to work overtime at translating for me.

The drive from Nuchatel to Bern and on to Thun was magic. Switzerland is a beautiful country. Bill lived in the main street of Thun.(say Toon) It is a quaint, historical town with a fairy tale castle dominating the skyline. The town sits on the edge of the Lake of Thun and the River Aare splits in two and passes through the middle of the old town. It is the most picturesque town surrounded by the towering Alps. (Bear with the 40 year old, scanned, slide photos.) This is the brochure that I poured over in the months leading up to this trip. I couldn't believe I was actually going to be there soon. It was one of those places you thought you would only ever see in a brochure in a travel agents window. Bill's parents lived in The Balliz, the main street running down the middle of the island in the River Aaare as it leaves the Lake of Thun (Thunersee). This is where I would be living for a while. Thun is dominated by its castle and church on the hill to the left of the river. The towering Eiger, Monch and Jungfrau Mountains are in the background. Thun's position at the hub of a rail, road and ferry network make it the gateway for excursions into the Bernese Oberland. (The Swiss Alps in the Canton of Bern) 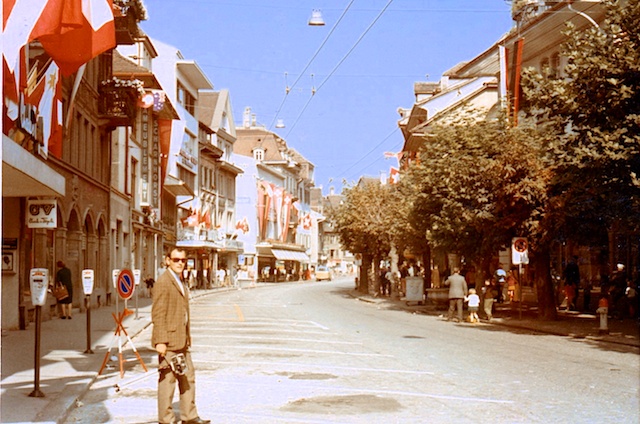 Bill outside his parents apartment block in the Balliz, Thun. 1970. The road was closed for an impending festival. Today the road is permanently closed to traffic and is a pedestrian mall and market place. 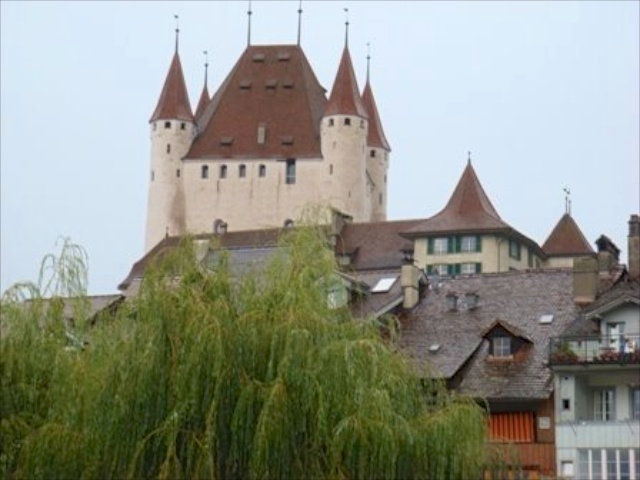 The ancient castle presides over the town. It is a Romansque square tower with four corner turrets in Norman style, built in 1186  by Berchtold V of Zähringen. Today it houses a museum including tapestries from the 1300's, armour, weapons, pottery, uniforms and costumes. 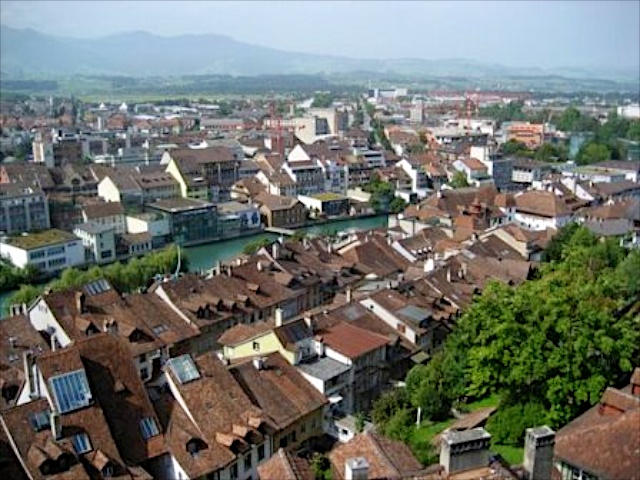 We climbed up into the turrets and we could see all over Thun, where people have been recorded as living here since 1130. 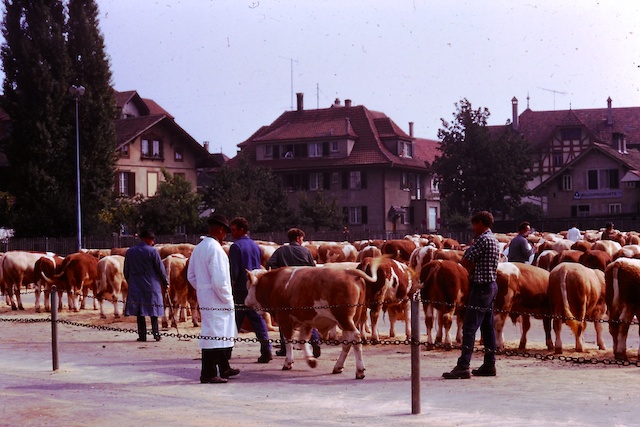 On this day in town it was the bull market. That was a first for me. 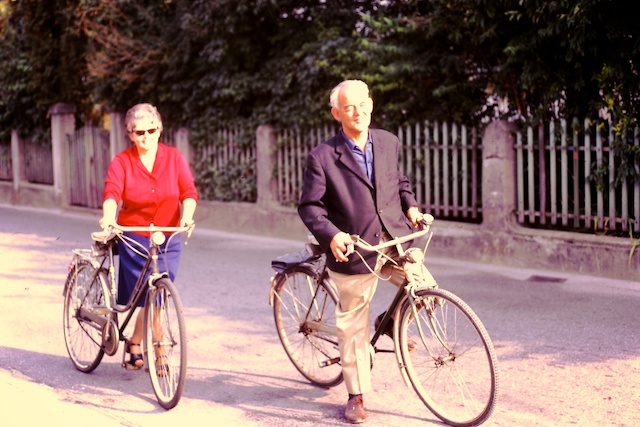 Bill's parents in their 60's still rode their bikes to work. 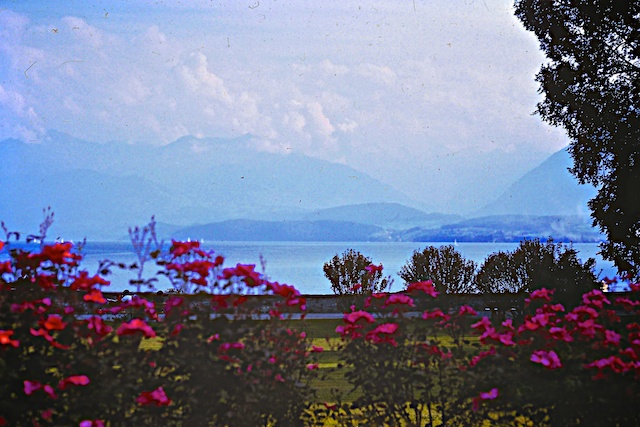 Thun sits on the northern edge of the huge lake. 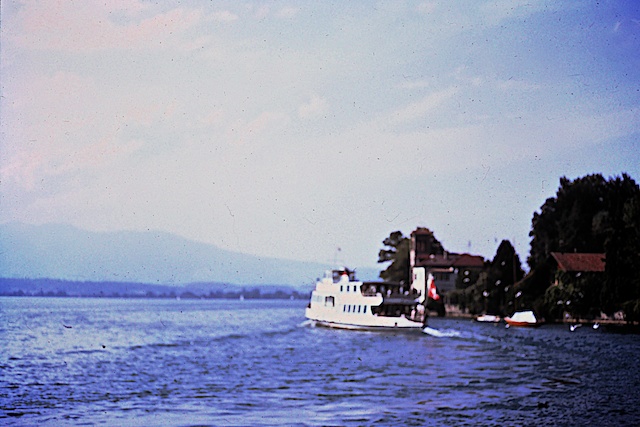 Bill and his parents were keen to take me sight seeing and we started with a steamer ride to Interlaken at the southern end of the lake about 20 km away. But the steamer criss crossed the lake stopping at many of the villages on the way. They were lovely picture book villages with traditional Swiss chalets. 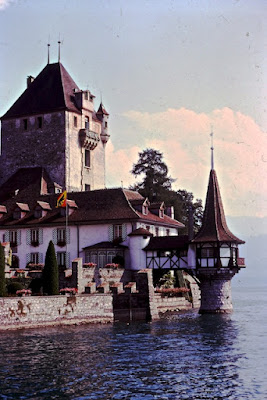 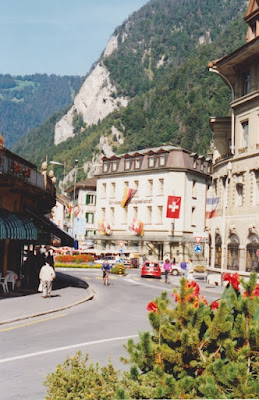 Castles also dot the edge of the lake. We strolled through the tourist town of Interlaken with the mountains breathing down your neck.  We had a delicious Swiss lunch of G'schnätzlets and Rösti (finely sliced veal strips in a creamy sauce with grated fried potato).
I had to keep pinching myself to make sure that I was really here and not dreaming. The holiday was only going to get better............................(stay tuned)
Posted by diane b

Email ThisBlogThis!Share to TwitterShare to FacebookShare to Pinterest
Labels: My Story, Switzerland 1970