CRUISIN' FOR THE FIRST TIME

When I was teaching in PNG we had about 8 weeks leave at the end of each year. I usually flew home to Sydney to stay with my parents and visit friends. However, at the end of 1966 I went on a cruise to Malaysia because my parents were on their first trip home to England after migrating in 1949. So it had been 16 years since my parents had visited their homeland. Unfortunately, in that time 3 of my 4 grandparents had died. That must have been sad for my parents and for my grandparents to not have seen each other again. 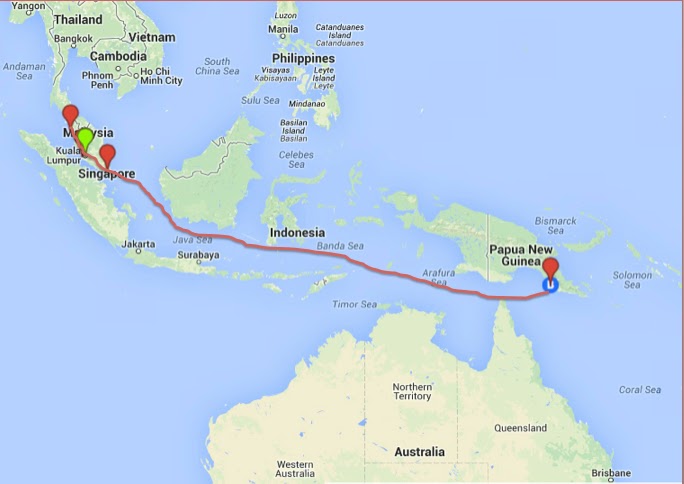 My friend, Jan and I bought tickets for a cruise on the ship, "Australasia" to visit Malaysia. The ship was mainly a cargo vessel which took some passengers also. So it wasn't like the flash, multi story cruise liners of today.
We sailed from Pt Moresby to Singapore, Penang, Kuala Lumpur and back to Singapore and Pt Moresby.
I was 23 and excited to be going on my first cruise and holiday overseas. 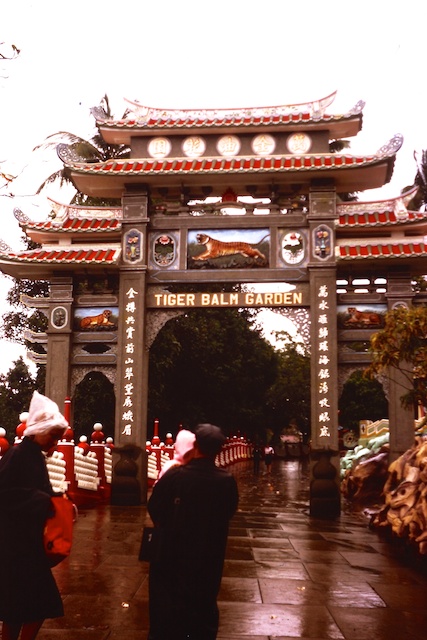 Up until 1965 when Singapore gained independence and Lee Kwan Yew became Prime Minister, Singapore had had a turbulent history and wasn't a well developed country. Lee Kwan Yew dragged it into the twentieth century and it quickly became the clean, modern place that it is today.

The first thing I remember about Singapore was the heat, the rain and the smell. Not like todays sanitised city. However, it was exotic and a little scary but we had some of the ship's crew with us. This was the first time I had seen transvestite prostitutes in the street. It was a seedy place at night.

We visited the "Tiger Balm Gardens" where we saw lovely tropical plants, many sculptures and even monkeys running around begging food. 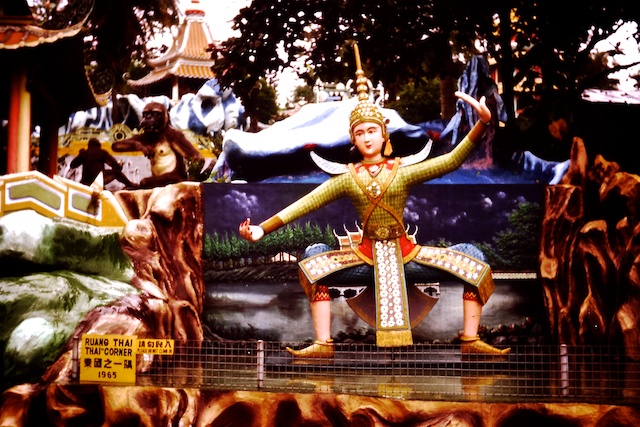 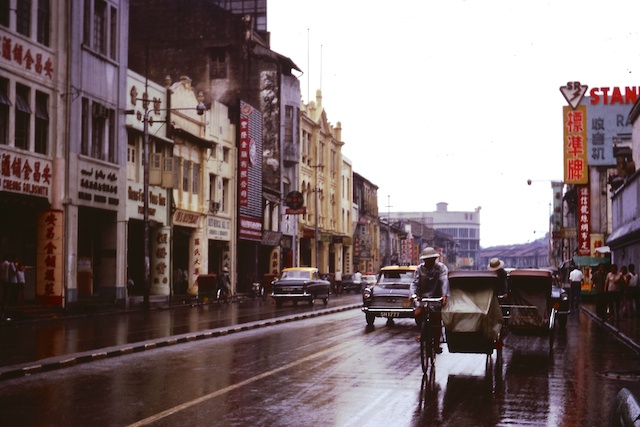 There were many men with straw hats peddling bikes with a rickshaw's attached at the side. The shops were so different to the modern malls of today. 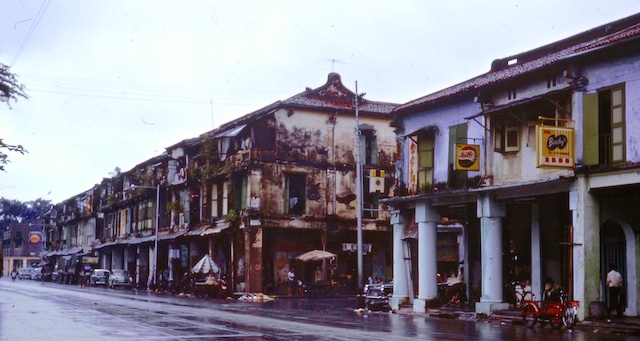 The apartment blocks had a rustic charm but probably not as comfortable as today's apartment towers. 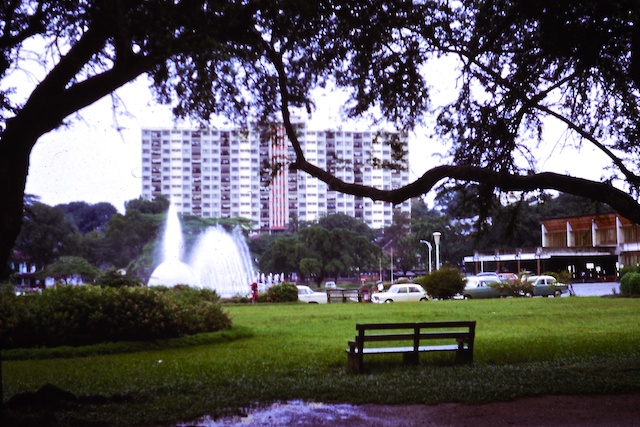 It was 1966 and Lee Kwan Yew had started to get modern apartments built.

The ship was a few days in Singapore unloading cargo. There was always a little blackboard at the top of the gang plank telling us when the ship would leave. We were told that the ship waits for no one. We had to make sure that we were back in time and hope that they hadn't unloaded earlier than expected. 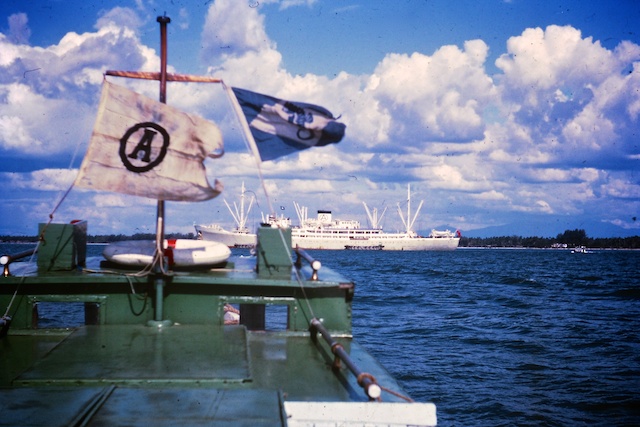 We sailed up the coast of Malaya to Penang Harbour, where we had to be taken to the wharf in a tender. Our ship, Australasia, is in the background 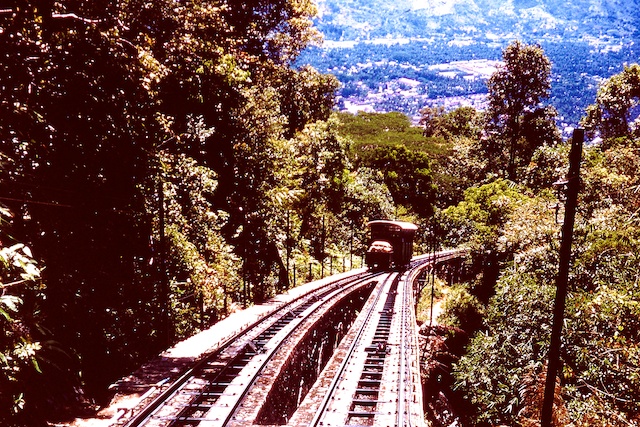 In Penang we caught a funicular cable train up to the top of the island. It was very steep. 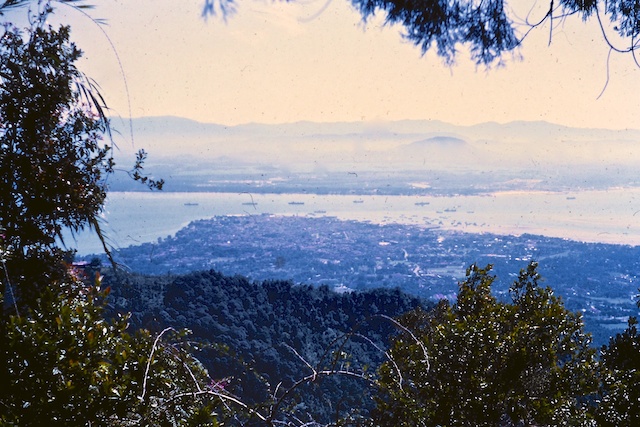 It was an amazing view at the top overlooking the harbour. 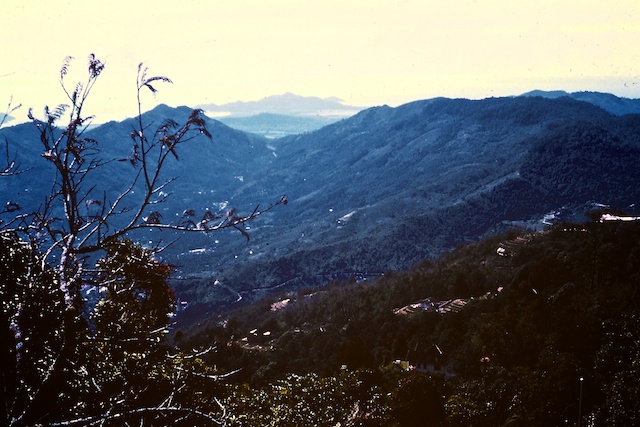 It was a beautiful rugged Island. 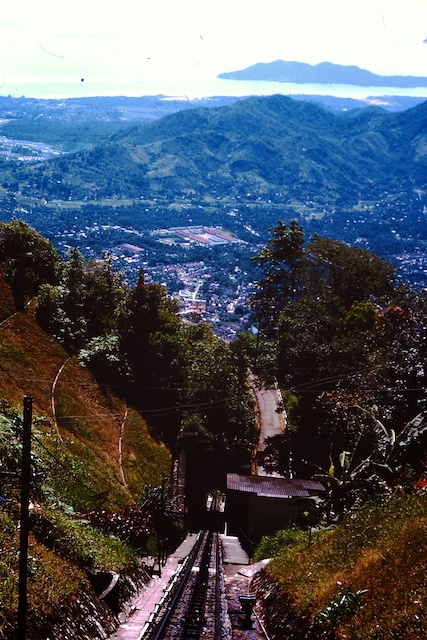 Then we rumbled down the track back to the town. I had my heart in my mouth. 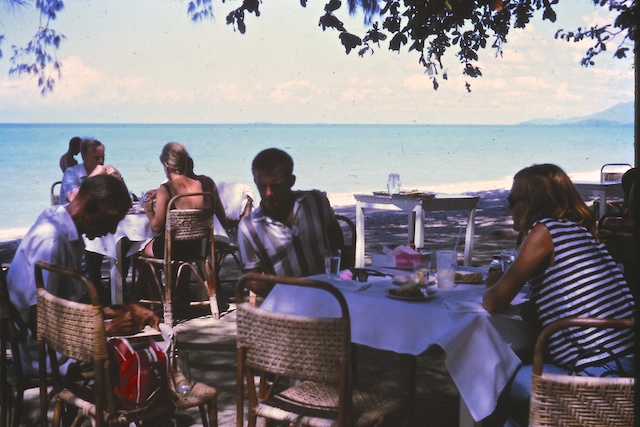 I had lunch at a hotel on the beautiful white sand with my friend Jan and some boys from the ship. It is hard to believe how this place was devastated by a tsunami not long ago. I recently met Jan again in Adelaide after all this time. 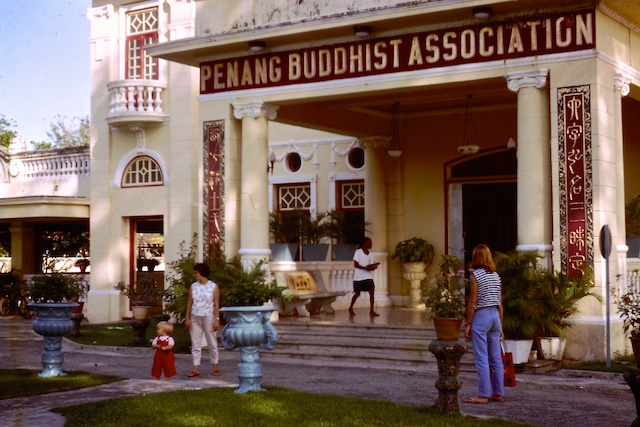 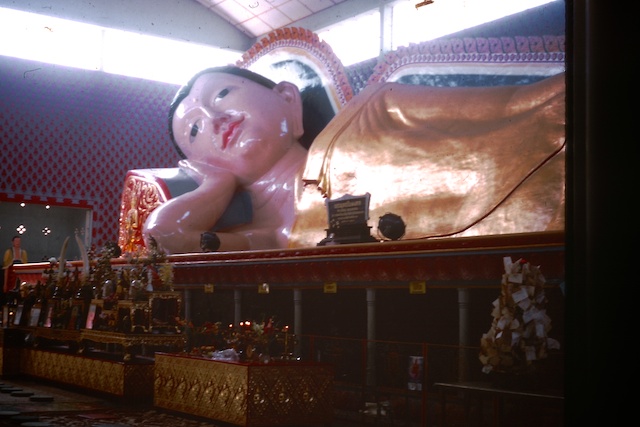 Inside was a giant reclining Buddha wrapped in gold. 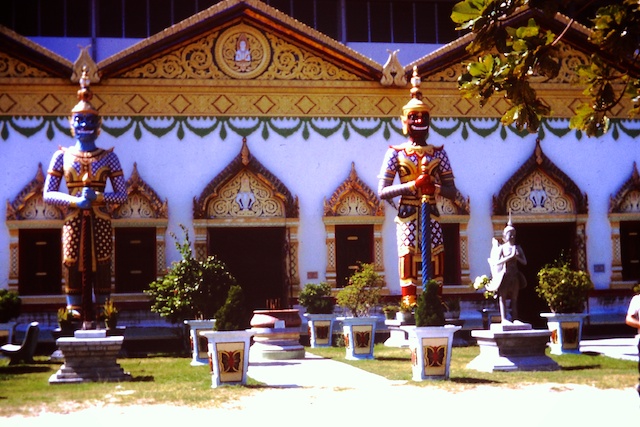 Outside this temple there was a big pot with sand and joss sticks burning. Lying on the sand were many viper snakes. I think they were sacred and had a religious reason for being there. 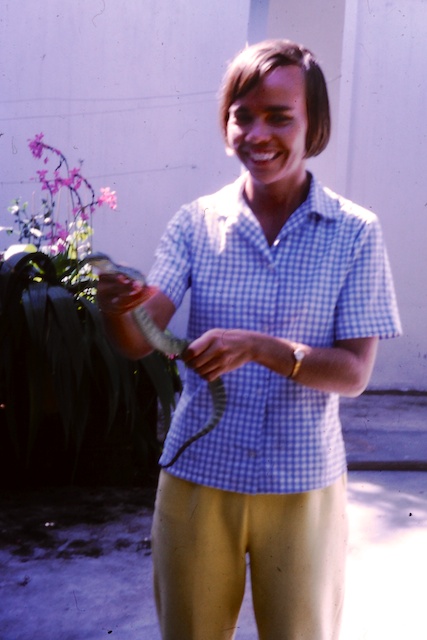 Tourists were encouraged to pick them up for photos. They are deadly poisonous snakes but they had their fangs removed and were made sleepy by the burning joss sticks. So I plucked up the courage to hold one. 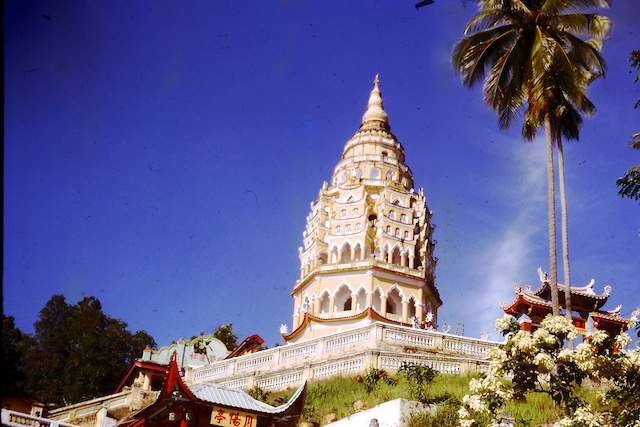 This was a Chinese temple. I enjoyed Penang very much but this was as far north as the ship went. 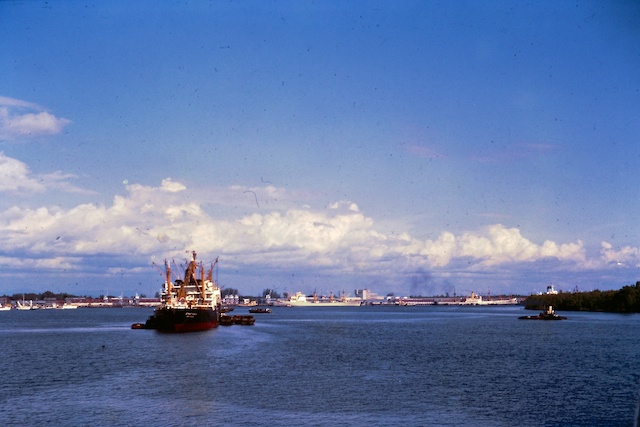 We turned south and called into Pt Swettenham the gateway to Kuala Lumpur the capital of Malaya. 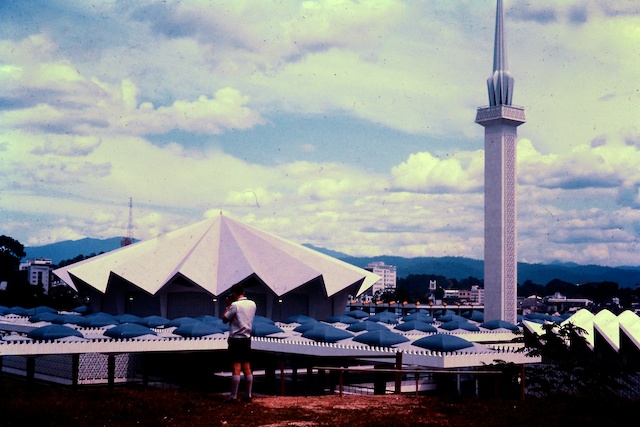 We got taxis into the city. It was quite a modern city compared to Singapore at that time. This was the National Mosque. 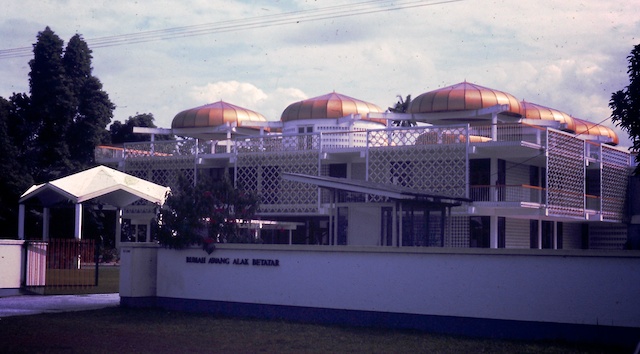 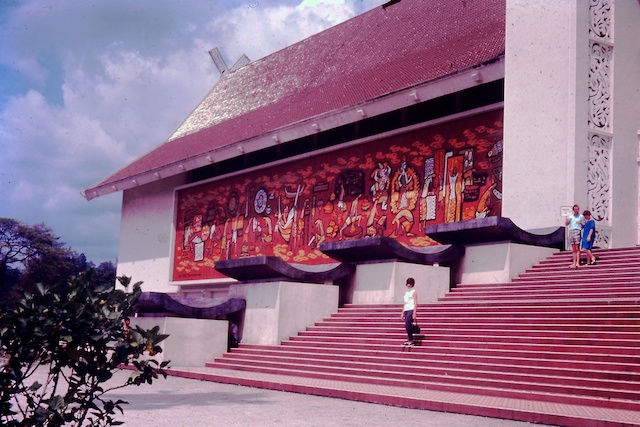 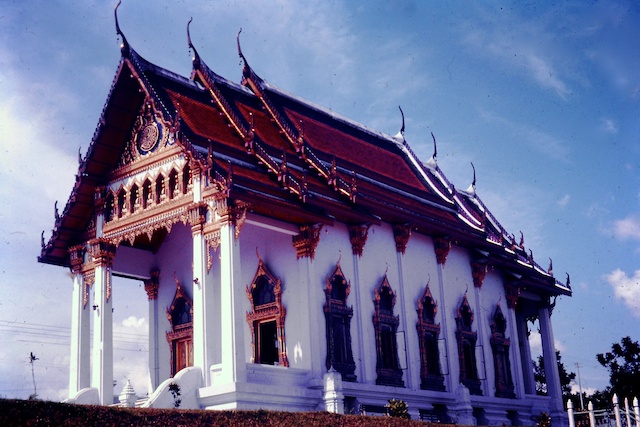 A most beautiful Siamese Temple with gold trimmings and roof. 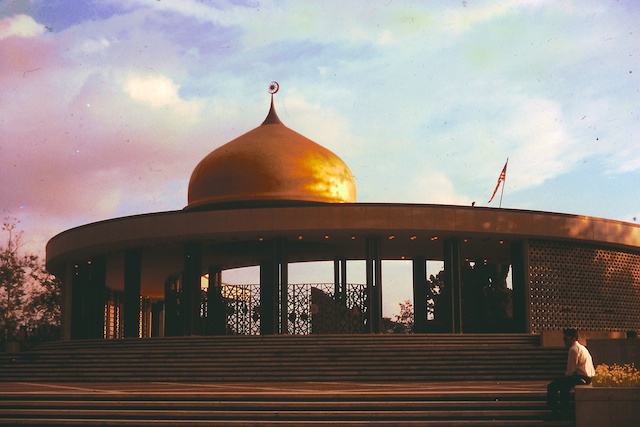 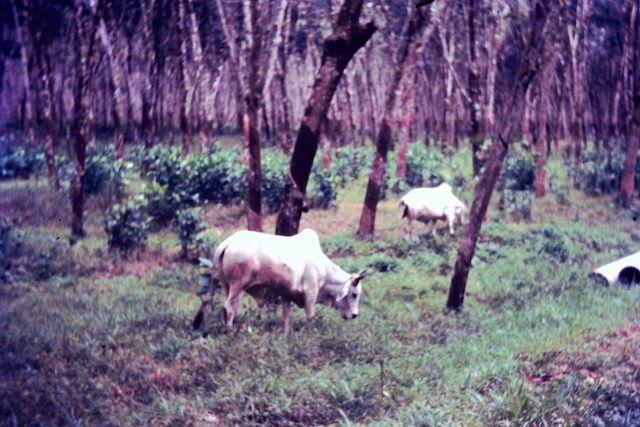 Besides buildings we went on a tour of industries. A rubber plantation with Brahman cattle. It was the first time I had seen these type of cows. Now we have them in Northern Australia too as they cope with heat. 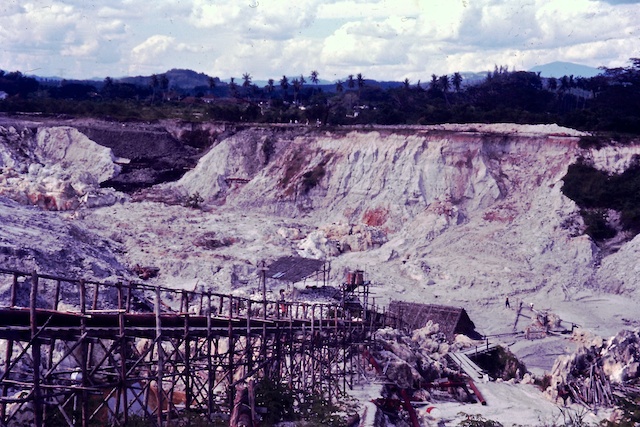 We saw a tin mine too. 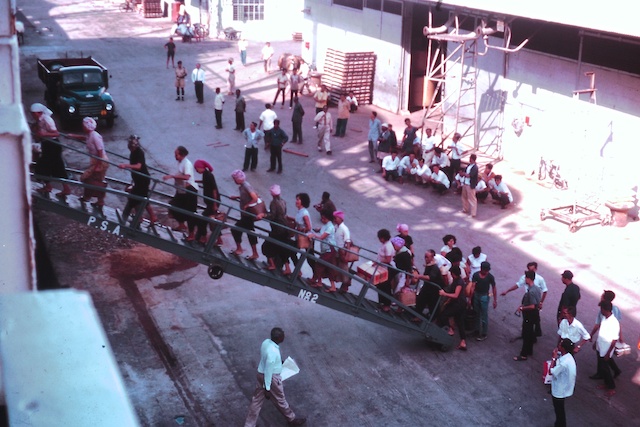 Then we were on our way home but we stopped in Singapore to have the tallow cleaned out of the holds by these women. Apparently it was a horrific job. They worked in the terrible heat of the hold. They had to scrape the tallow off the walls by hand. Tallow is rendered beef and mutton fat processed from suit. It is solid and is used to make soap and as animal feed. It is also used to produce shortening  for cooking. McDonalds used it to cook fries until 1990.


After a few days at sea we were back in Pt Moresby ready for another year's work and fun.
Posted by diane b

Email ThisBlogThis!Share to TwitterShare to FacebookShare to Pinterest
Labels: Malaysia holiday 1965/66, My Story