In 1965 I was teaching in Papua/New Guinea. During the school holidays my colleague, Bev, and I booked a tour to see the Mt Hagen Show. Mt Hagen was a small town in the Highlands where every year the people of the Highlands stage a cultural show. It attracted tourists from all over P/NG. However, the small town was not really geared for an influx of tourists. We had to take our own sleeping bag as our accommodation was community sleeping on the floor of the Govt. Stores building. 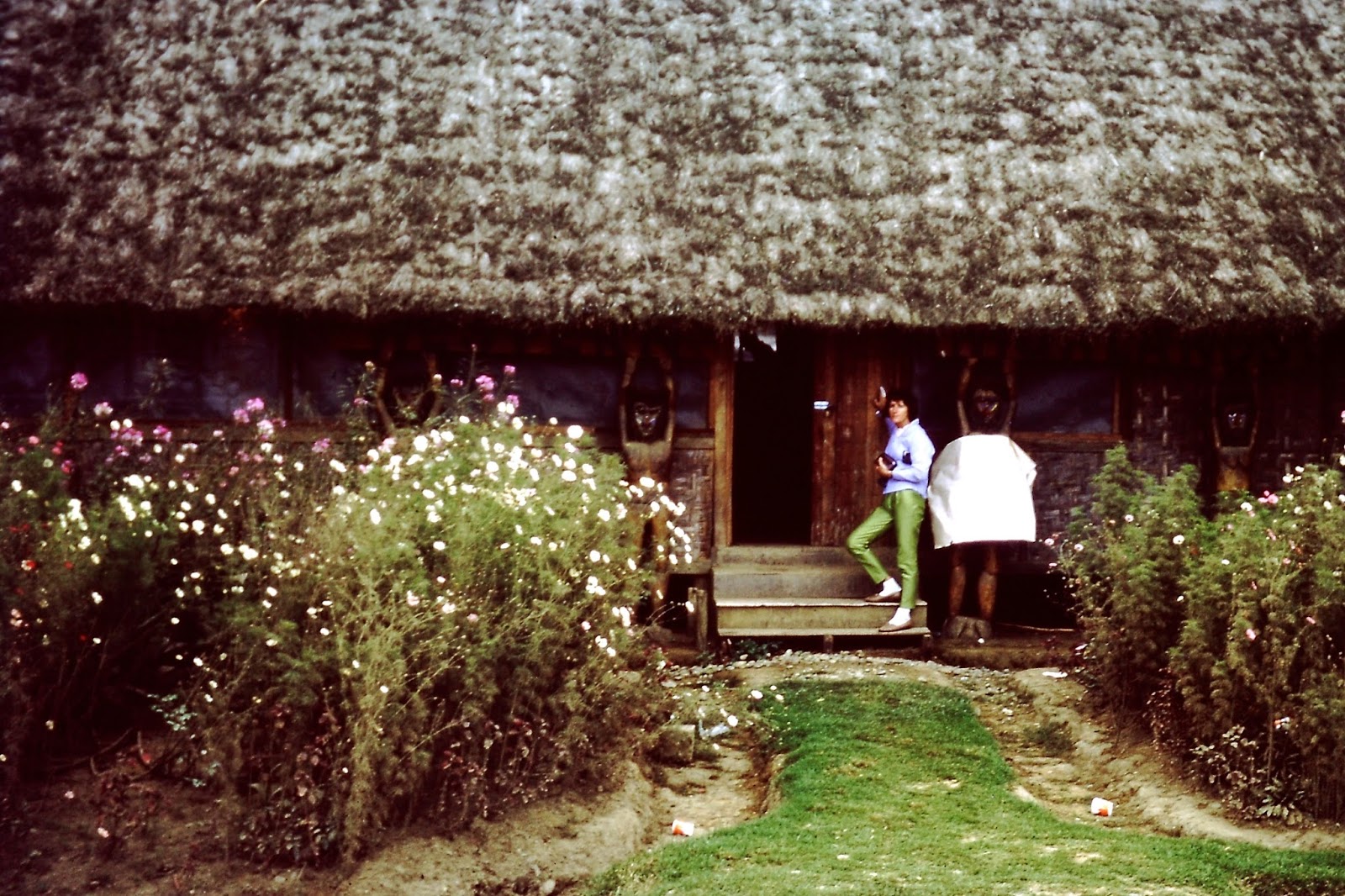 We ate our meals in a mess set up in the old District Office building. Bev is waiting for me. 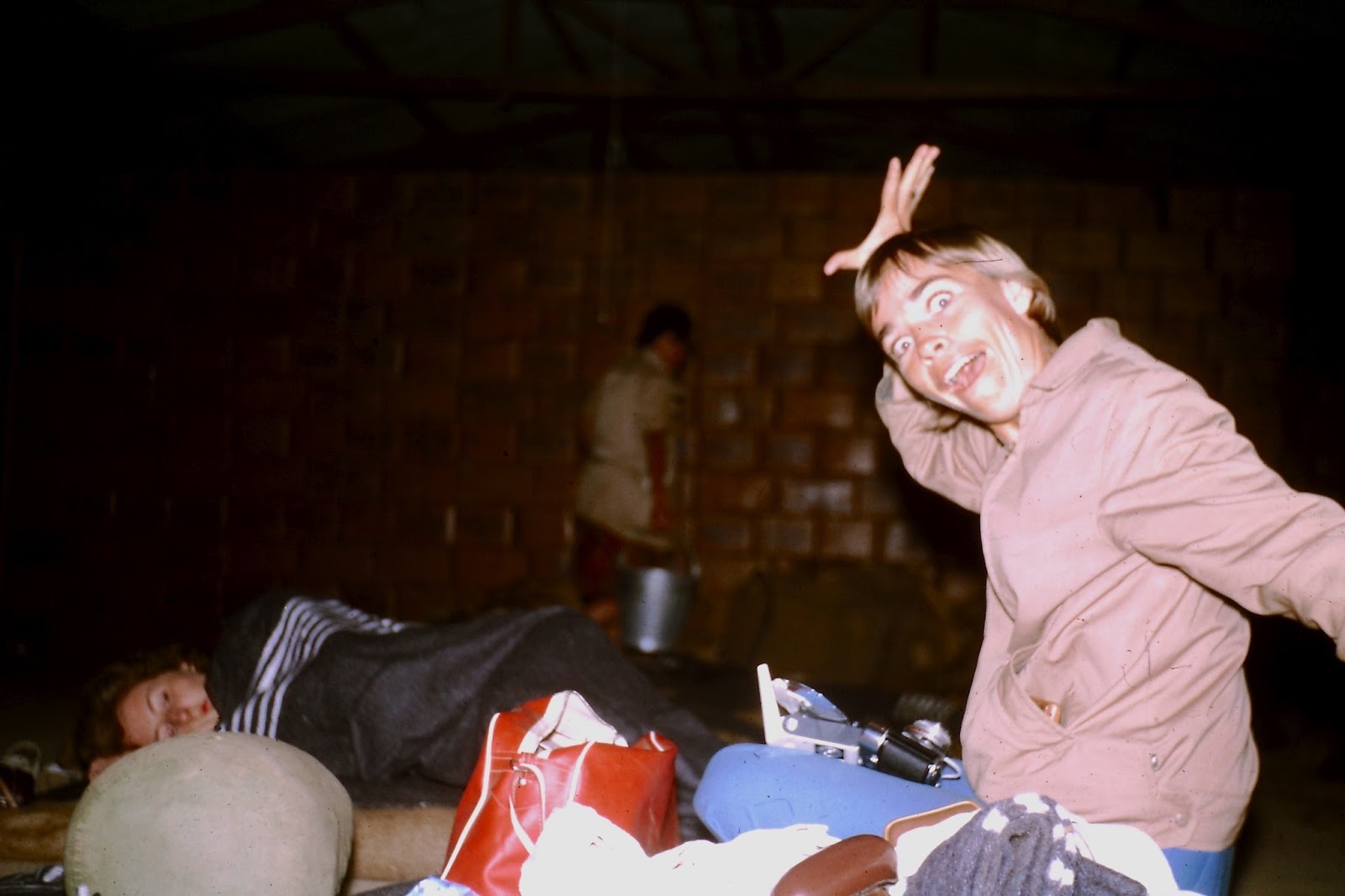 It is much colder in the highlands than on the coast in Pt Moresby, where I lived. This was my piece of floor space for sleeping. The primitive conditions didn't seem to stop me enjoying myself. 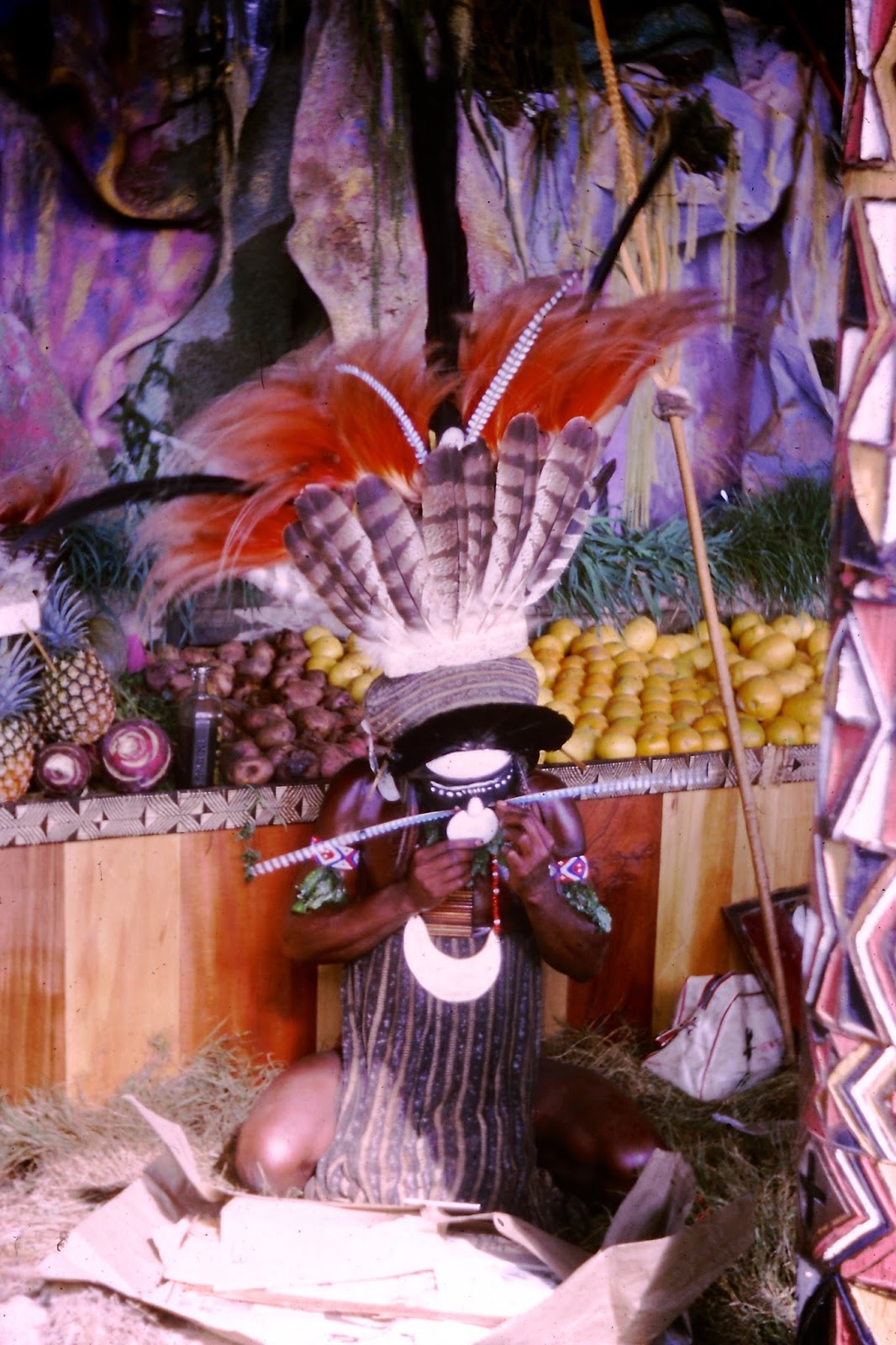 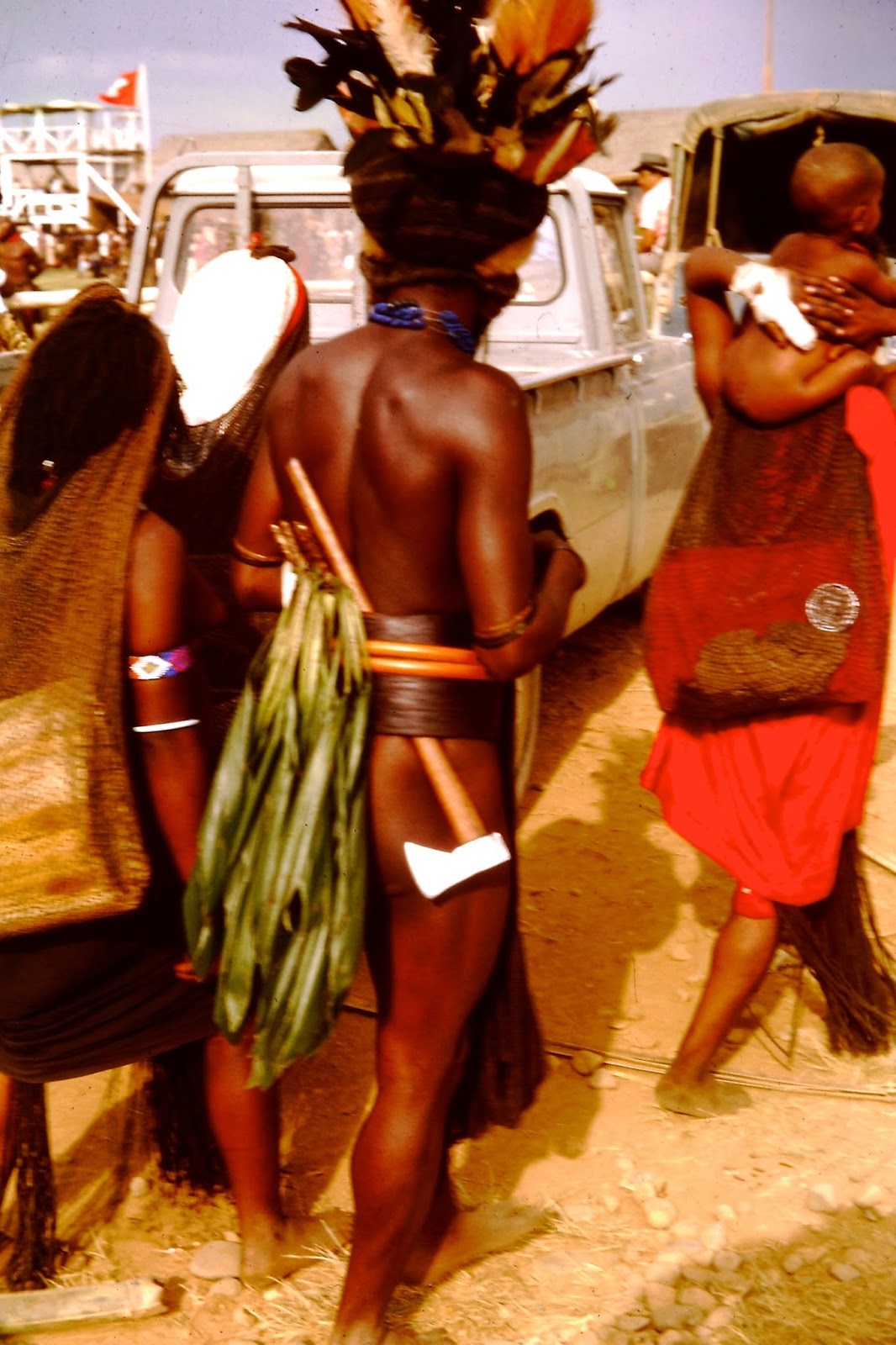 In the agricultural pavilion there were people dressing in their traditional dress and paint for the tribal dances we would be seeing during the day. Native people came from many different villages in the mountains. I was surprised to see an axe weapon tucked into a grass skirt. 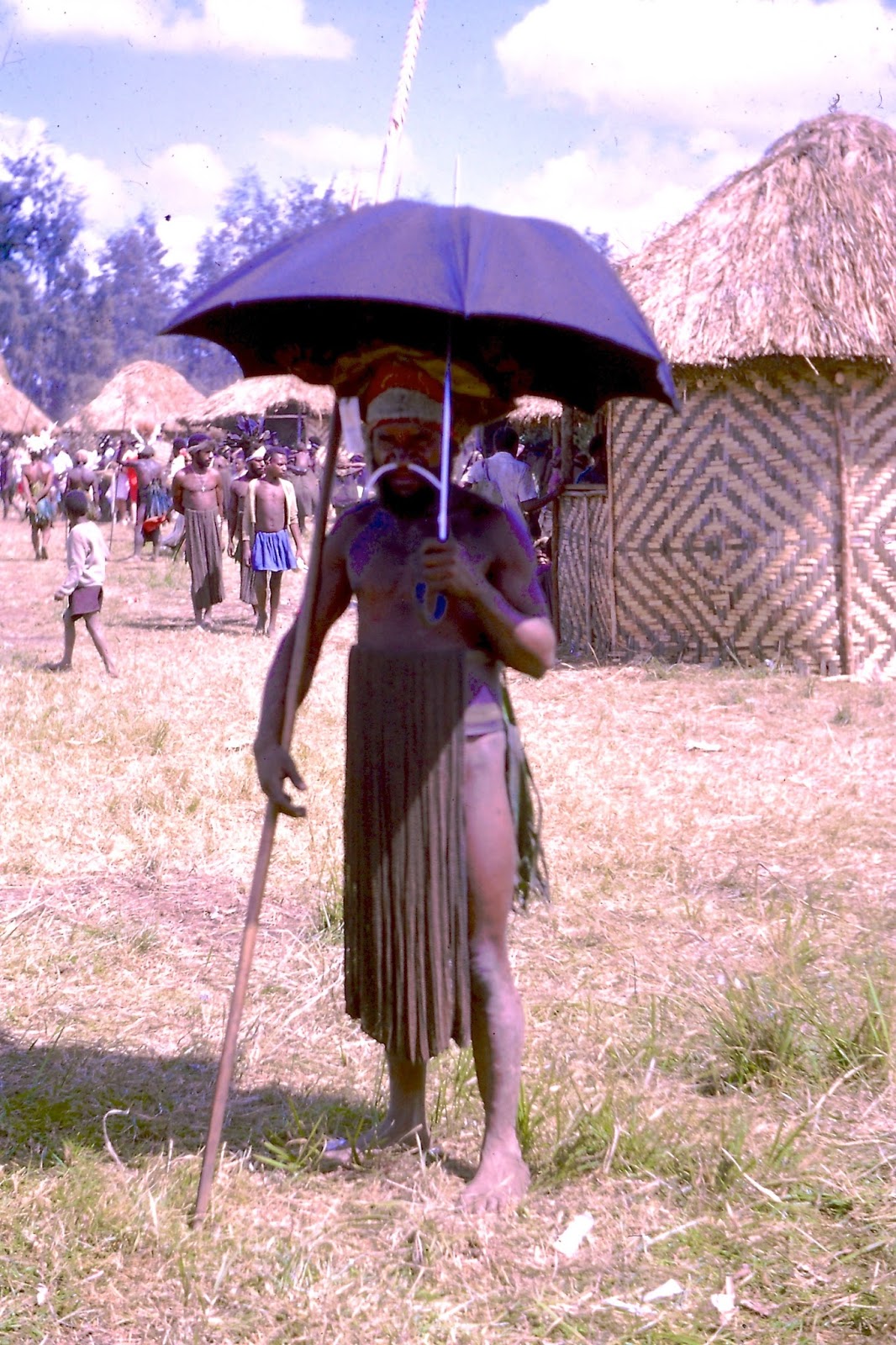 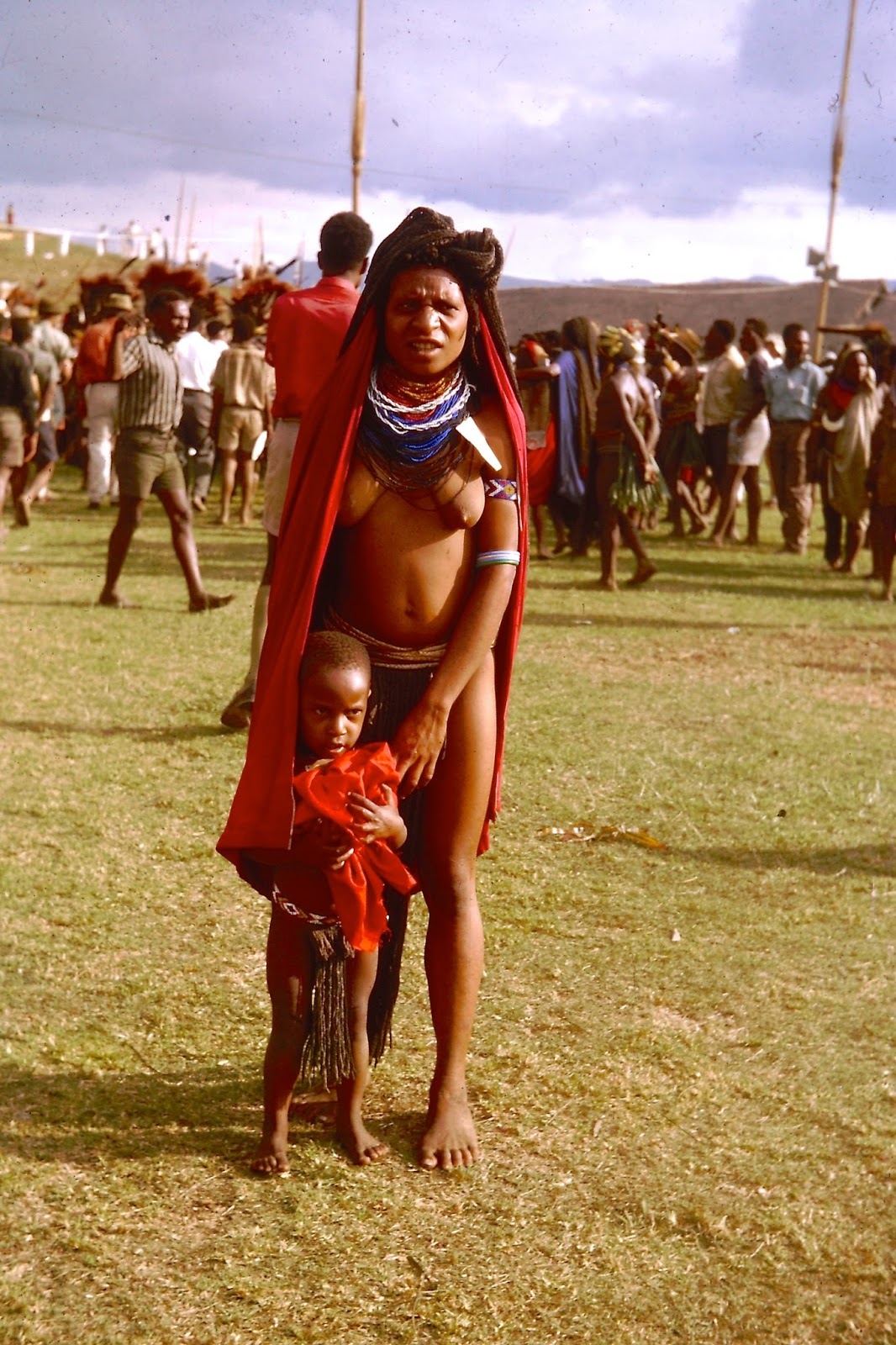 I often came across scenes where the old and the new
were hand in hand. Traditional dress and a western umbrella. 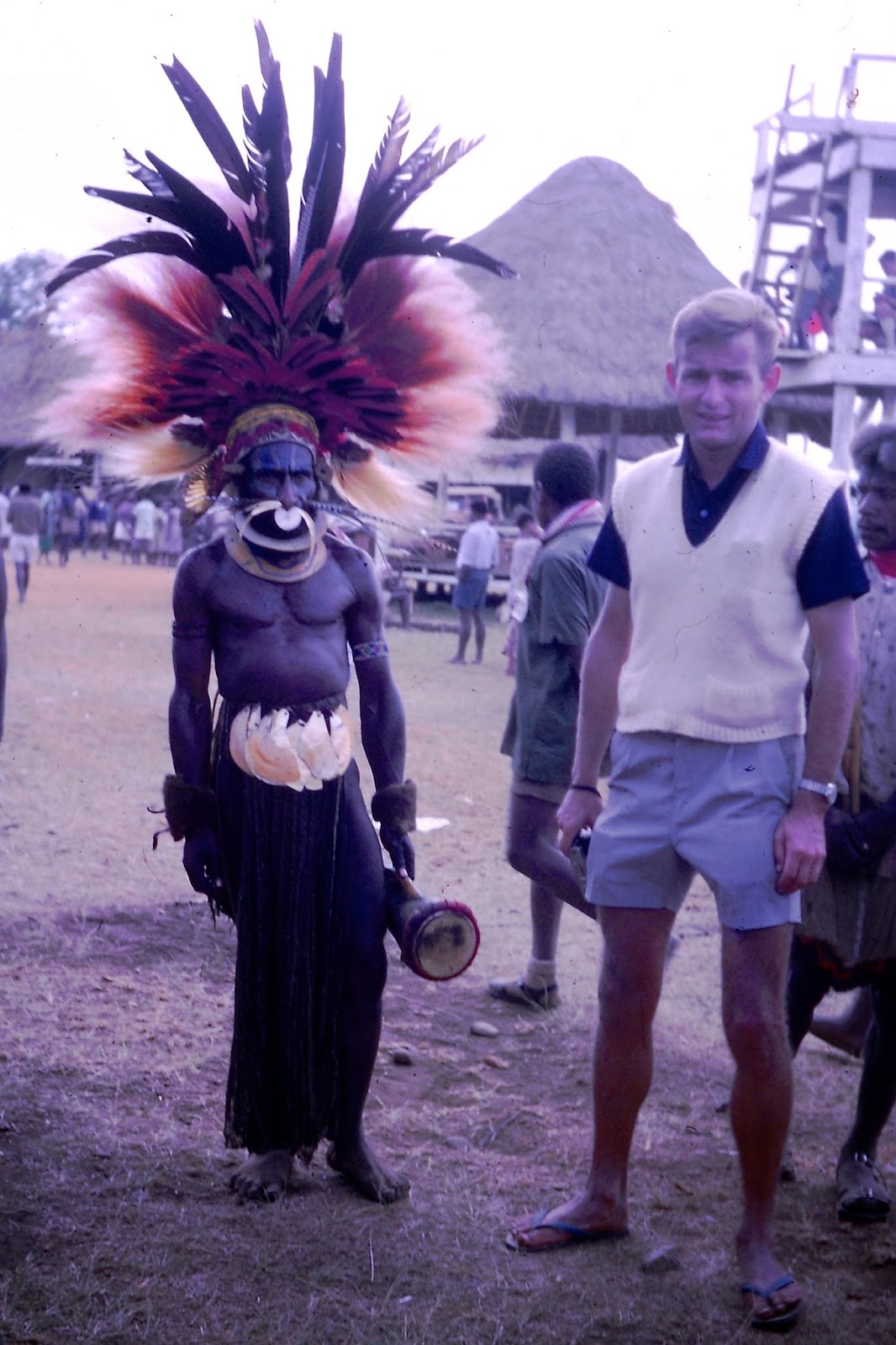 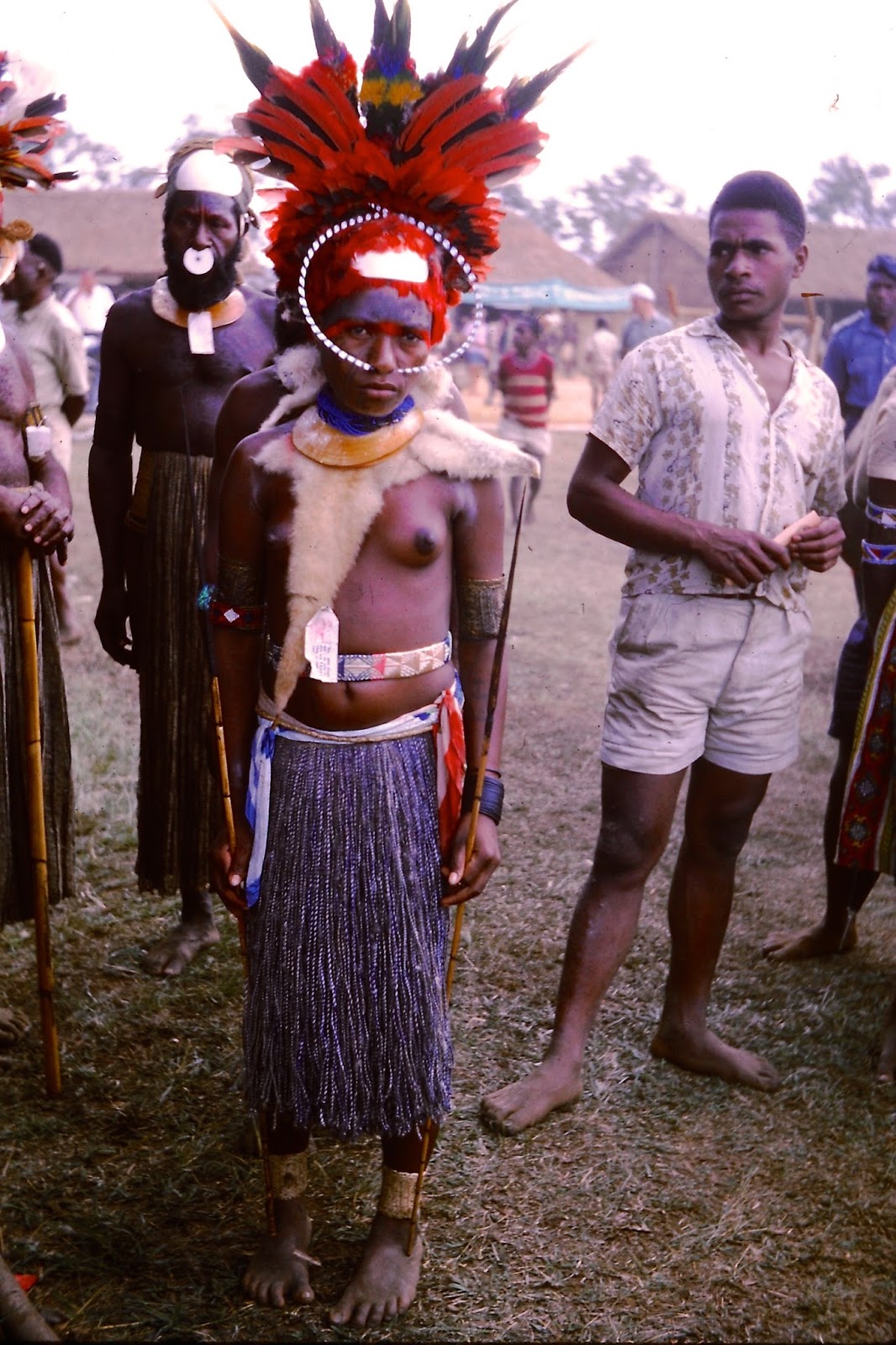 Some of the head dresses were fabulously made from feathers, often Bird of Paradise feathers. The European guy is Kurt, a Swiss artist who was living in Pt Moresby. 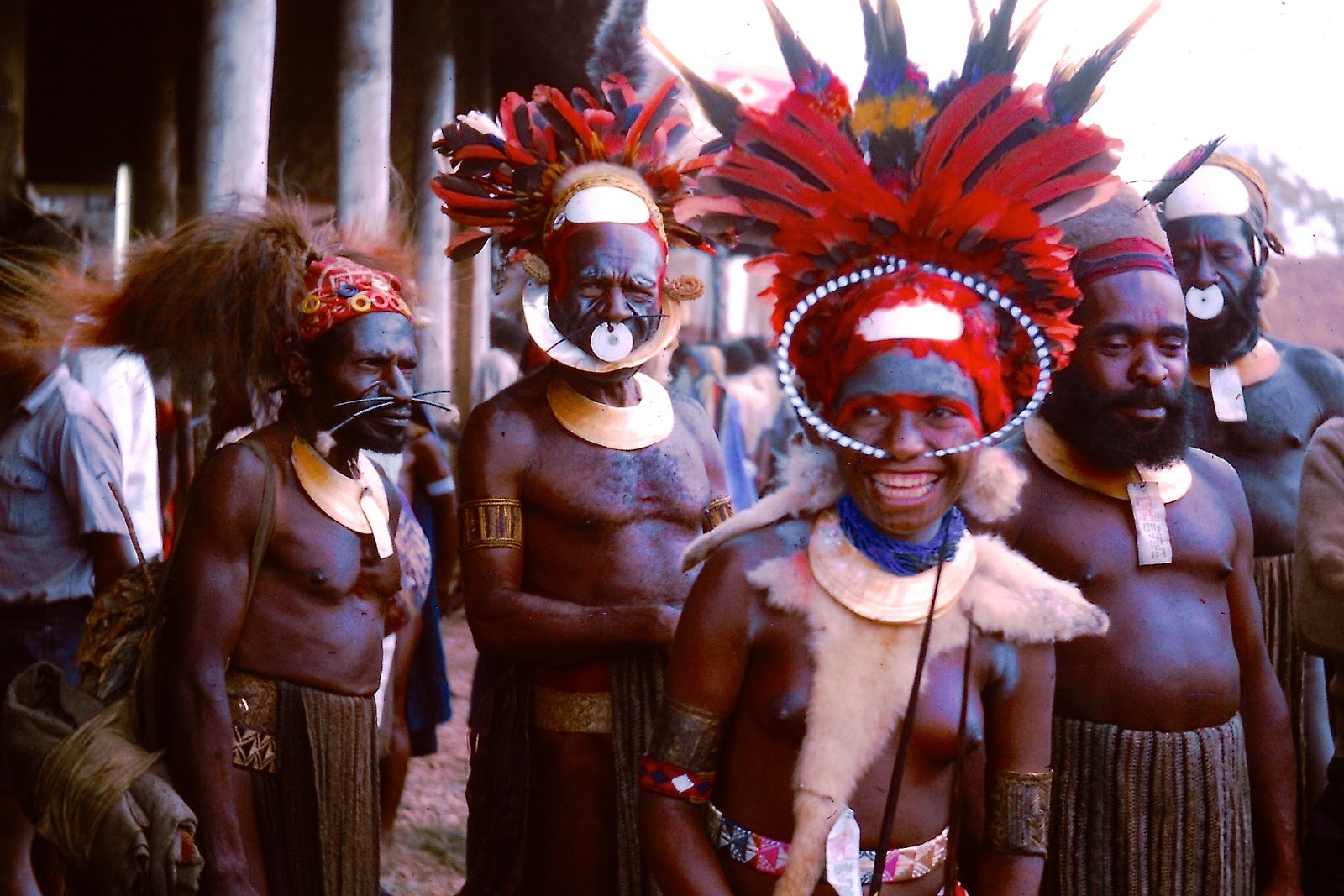 Shells are rare in the highlands so they became a symbol of wealth. Here they are worn around the neck and through the nose. The girl has a cuscus skin around her shoulders. 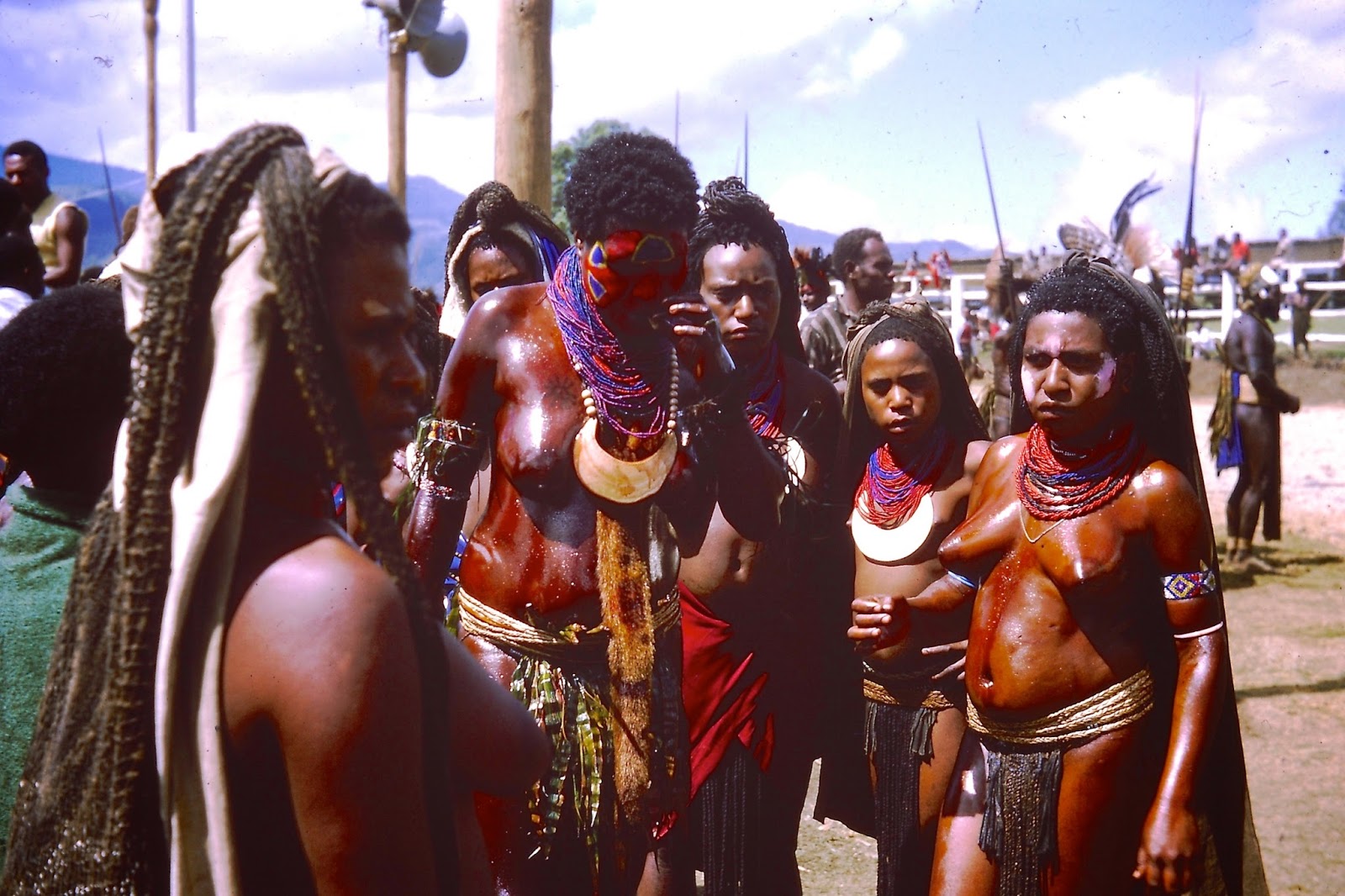 The women covered their skin with oil from pig fat. It was to make their skin look shiny and to keep them warm. 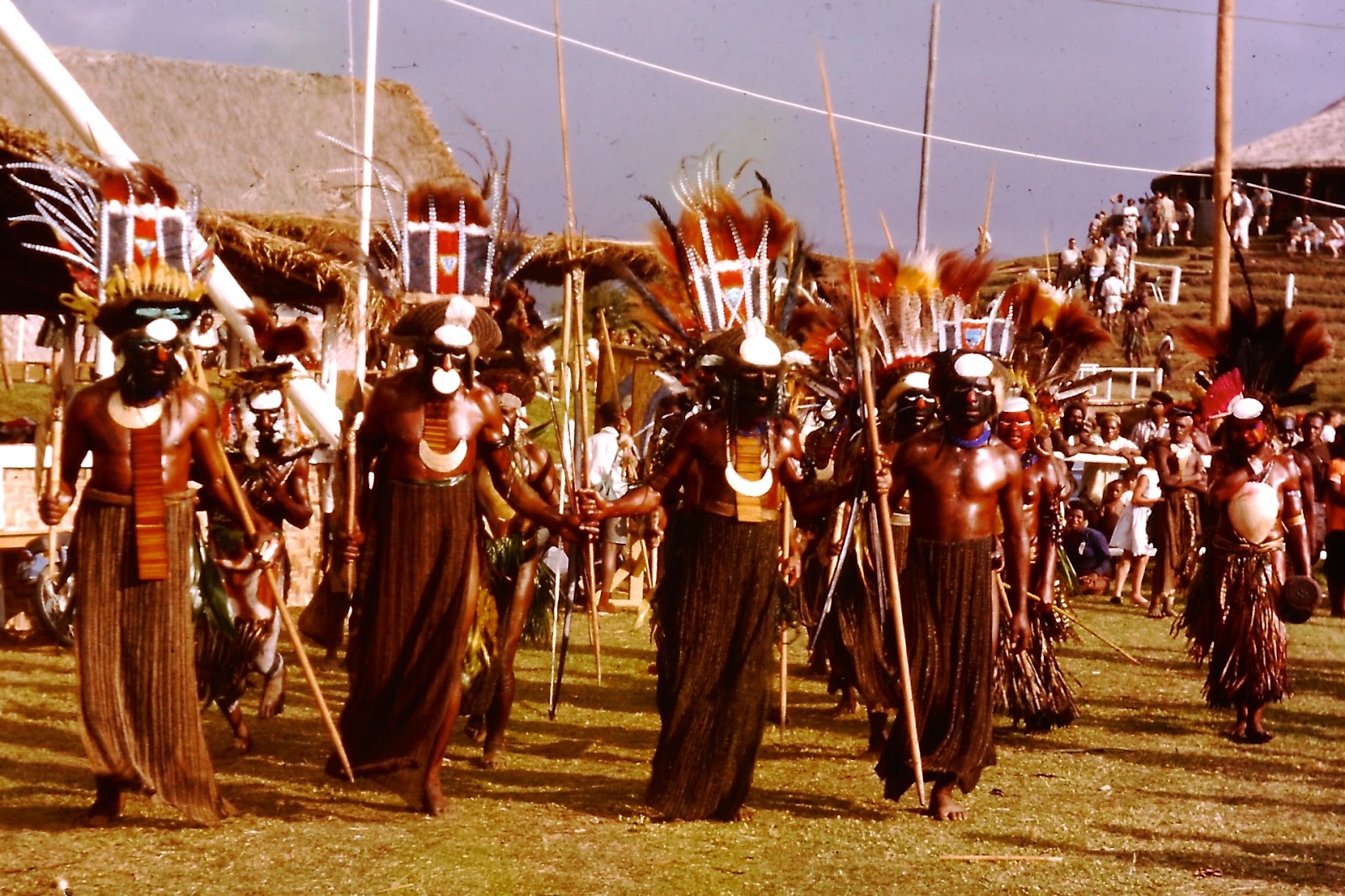 There were many different tribes dressed differently doing their dances. I think these are the Wabag people. 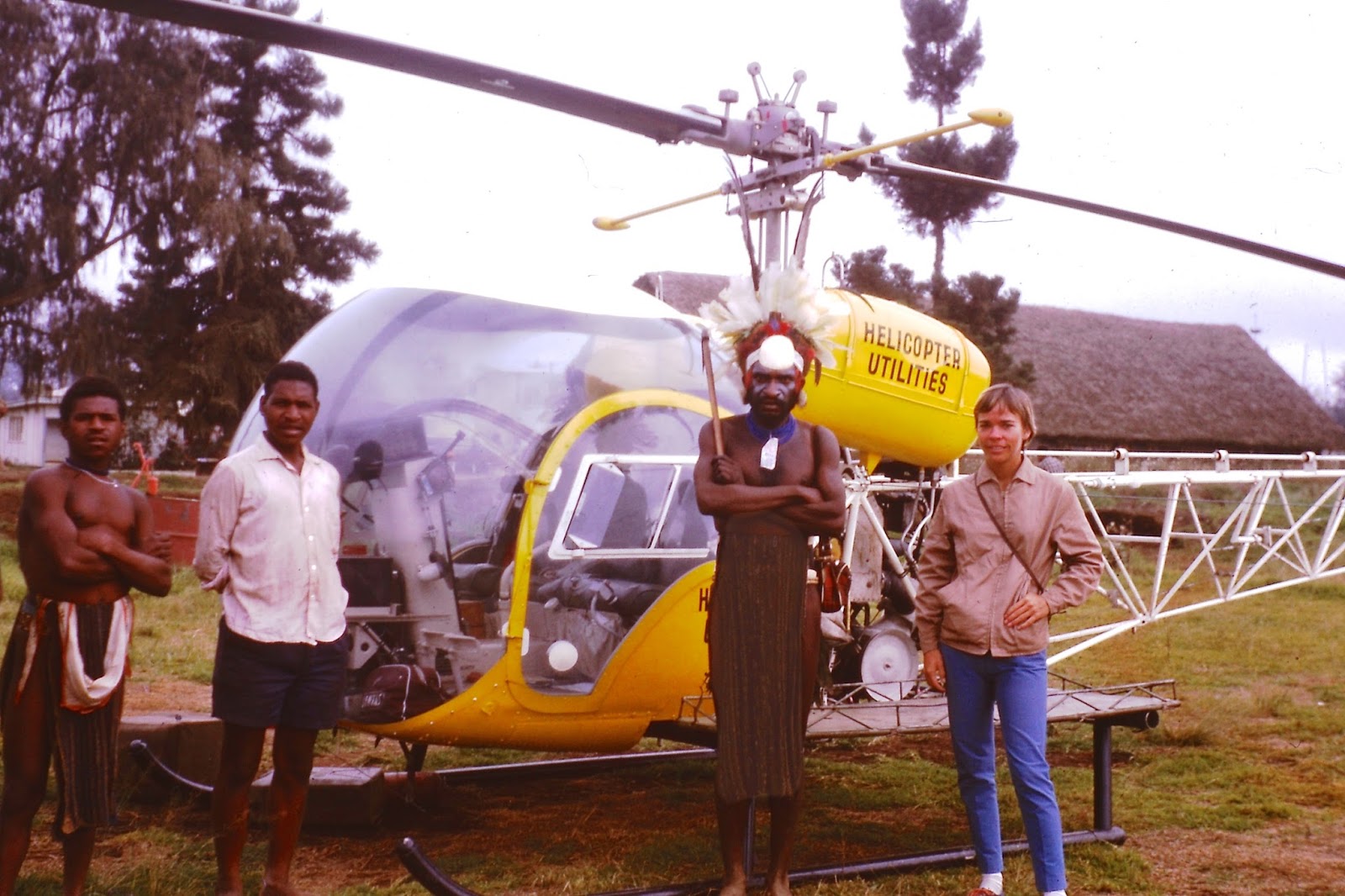 Again I was fascinated to see a stone age man with a then 'modern' helicopter.  I was a bit nervous standing next to him, they looked very warlike in their traditional dress. 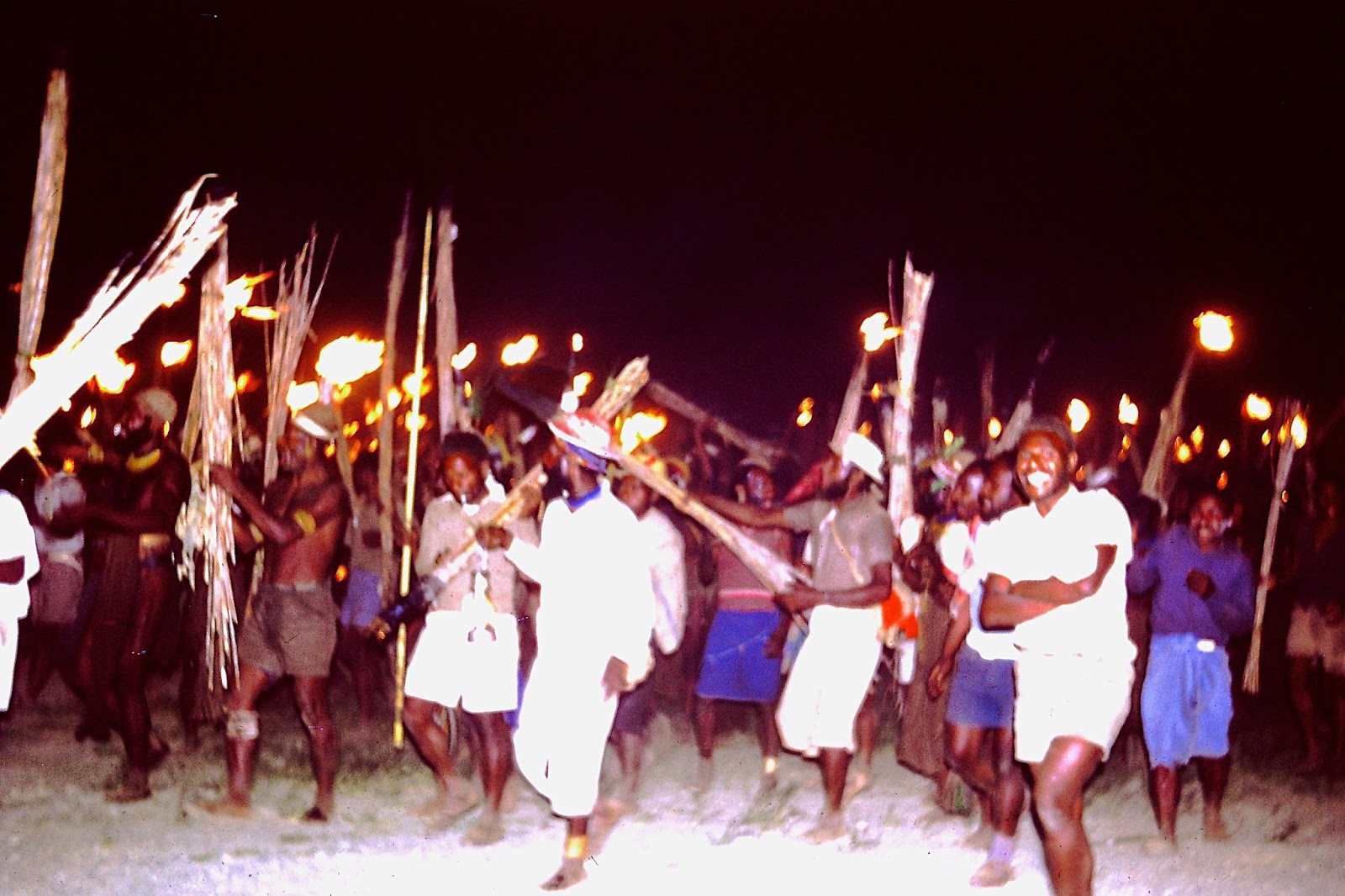 At night there was a torchlight dance of the warriors. Some of the locals joined in the front of the main group of chanting, singing and dancing tribes. 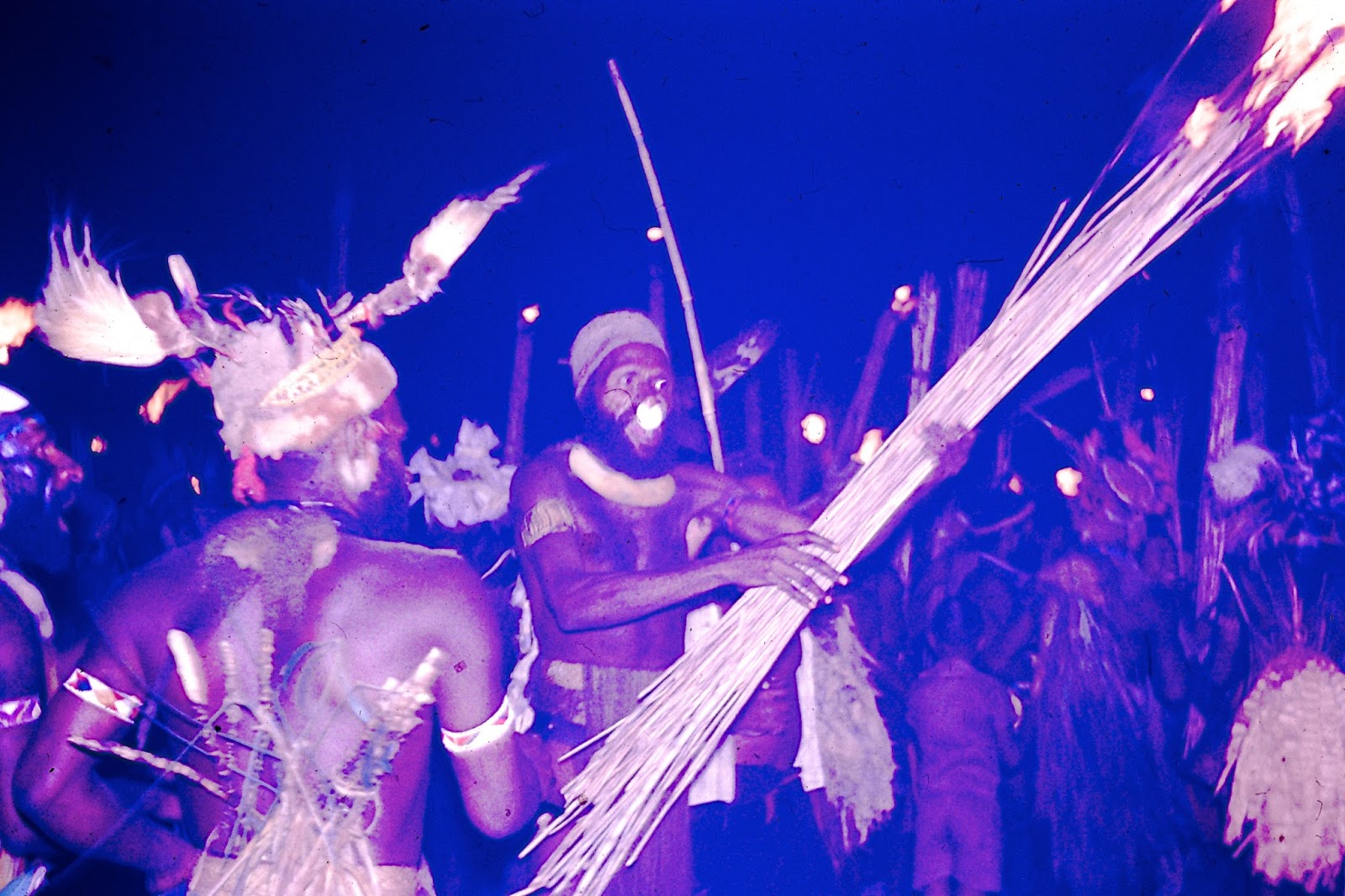 The noise was deafening and quite scary. It was hard to believe they were not really on the war path.

We were only there for a few days and then we flew back to Pt Moresby in a trusty DC3 through the valleys and over the peaks of the mighty Owen Stanley Mountain Range. It had been a wonderful experience to see some of the ancient culture of the native people (now called nationals) of the highlands.
Posted by diane b