Before we 'turned in' to our converted railway carriage accommodation at Undara we were told that breakfast would be a typical Aussie bush breakfast at sunrise. So at 6:30am we found ourselves on a short bush walk to the campfire area where a table was laden with breakfast ingredients and guests had to cook their own with the help of the staff.

We sat on tree stumps to eat our breakfast and watch the sun rise behind the trees. After this breakfast with a difference we were transported back to Mt Surprise railway station. 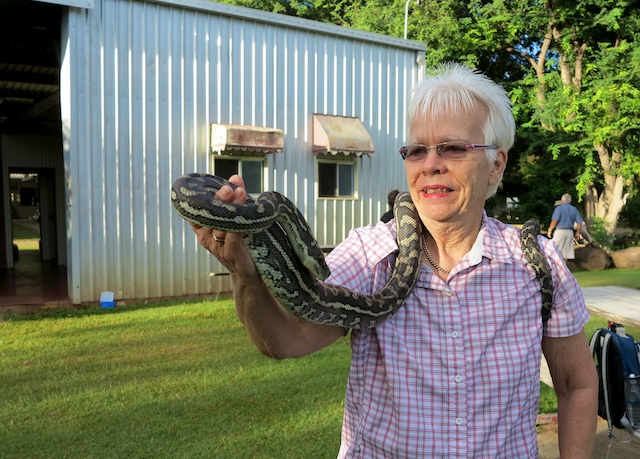 Before boarded the Savannahlander Train for the last time we were invited to look at a reptile display. There were all sorts of snakes and lizards in glass containers but one was a friendly carpet python.
We settled back into 'our' train thinking all the fun was over as we travelled back to Cairns but when we stopped at Almaden for lunch we were surprised to see the town all abuzz with people and excitement. It was because the "Great Wheelbarrow Race" was in progress and the first runners were due to complete this middle section of the race any minute.
The small town of Almaden with a population less than 100 suddenly had a 1000 people milling around its only hotel and finish line for the Great Wheelbarrow Race. The hotel had been extended with a canvas awning out over part of the main road from Cairns to Cape York.
The race lasts 3 days. There are different categories from individuals to teams. Some dress in fancy costumes and they all raise money for charity. The race starts in Mareeba then to Dimbulah the first day, 44km. Dimbulah to Almaden on the second day, 63km and to Chillagoe on the third day, 33km a total of 140km. pushing a wheelbarrow.
Late in the 1800’s when work was scarce and transportation was limited, miners often used to travel about the region using a wheelbarrow to carry all of their possessions. In 2004, as a tribute to these early pioneers and to honour their amazing trail-blazing feats, the road between Mareeba and Chillagoe was named the Wheelbarrow Way. 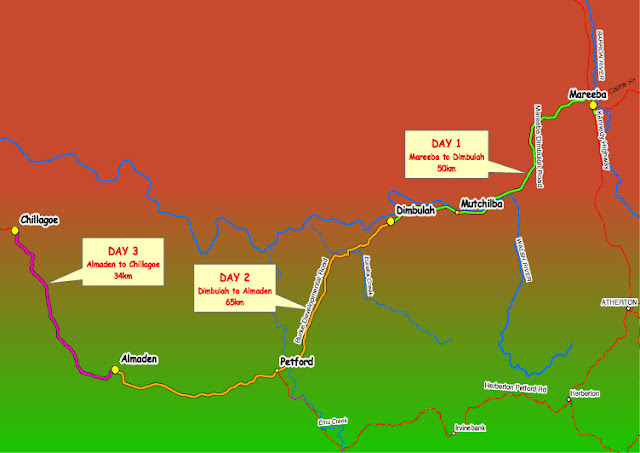 The following quote from a Mr Peel, an early settler in Chillagoe captures the essence of the spirit that is being celebrated with the development of the Wheelbarrow Way and the Wheelbarrow Race.
“Dad pushed a wheelbarrow in which were stacked all our belongings. A few pieces of iron which would be used as a shelter, maybe some hessian, a spade, a lantern, a few kitchen things and very little else. Mum and the children walked behind, Mum usually with babe in arms.”

This year is the 10th anniversary of the race which honours those early settlers and also attracts tourists to the area. It also raised $450,000 for charity. 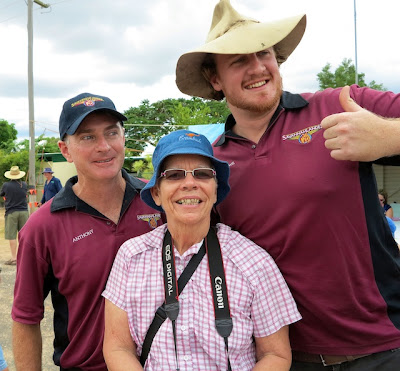 Our fun drivers and guides for the last four days tell us its time to board the train again. 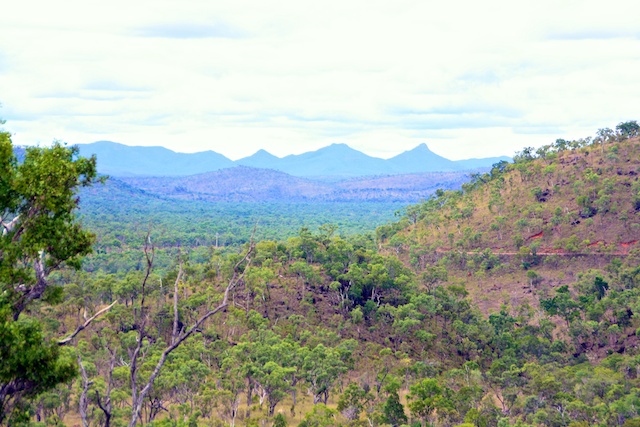 We left the Savannah country and headed back over the mountains and into the rainforest. The scenery was "pretty darn good."
Posted by diane b