WALKING IN THE RIVER CITY

The weather is cooler and it is time to take TOH out for an airing. TOH enjoys prefers walking in the city rather than in the forest (go figure) anyhoo we did the park and ride thingy on the train. We agreed on a walk along the river from Milton into the CBD of Brisbane, nicknamed 'The River City', obviously because the Brisbane River runs through the heart of the city. After an hour on the trains we finally arrived at Milton. By then it was coffee time. 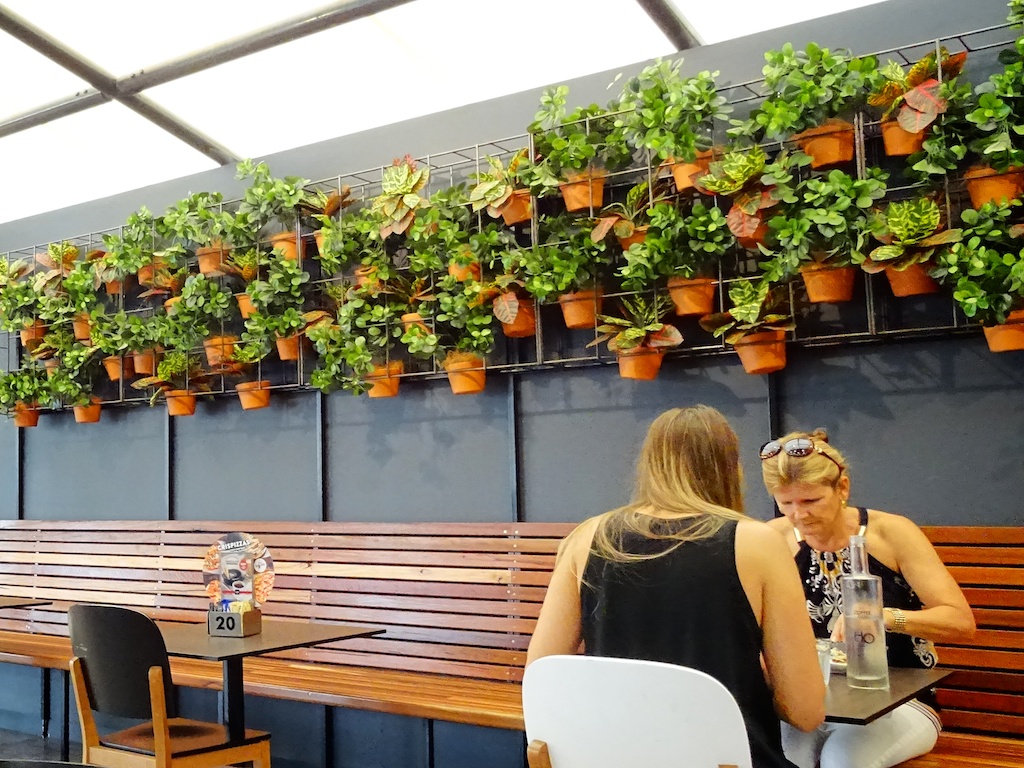 Naturally we walked down Park St which is an eat street and found a coffee shop. I thought the wall decoration was something different. 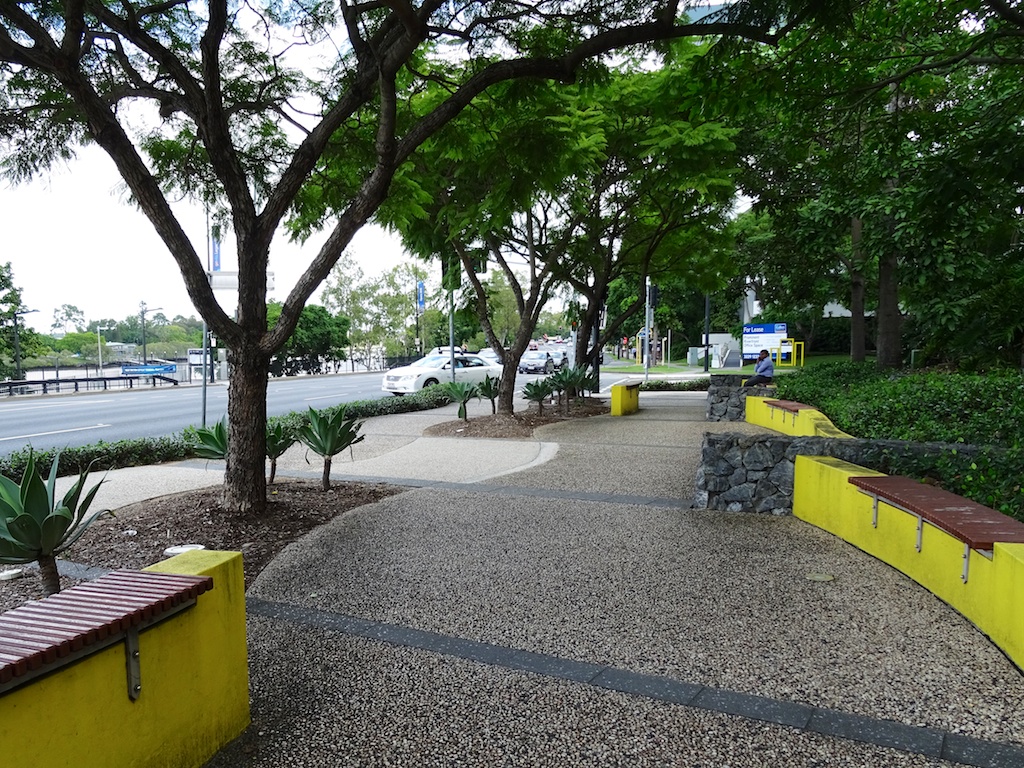 So, dosed up on caffeine we went on our way towards the river. 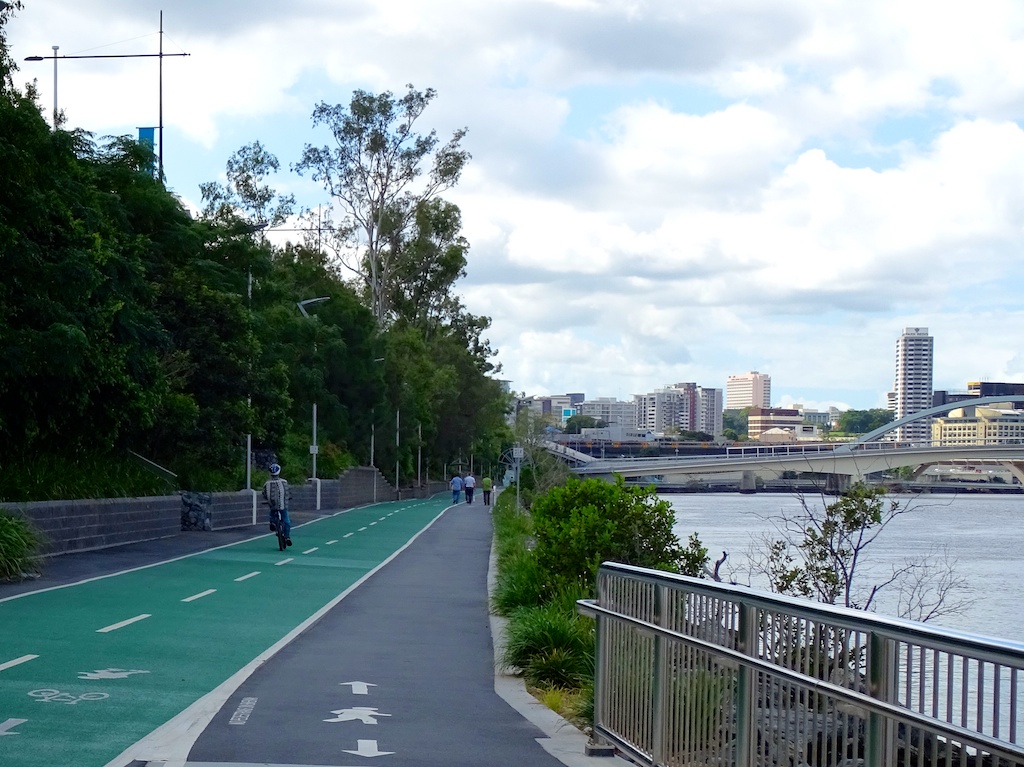 Soon we were on the super bikeway and walkway which follows the river into town. It was an overcast day but the rain held off while we walked. As the river runs through the middle of the city there are many bridges. 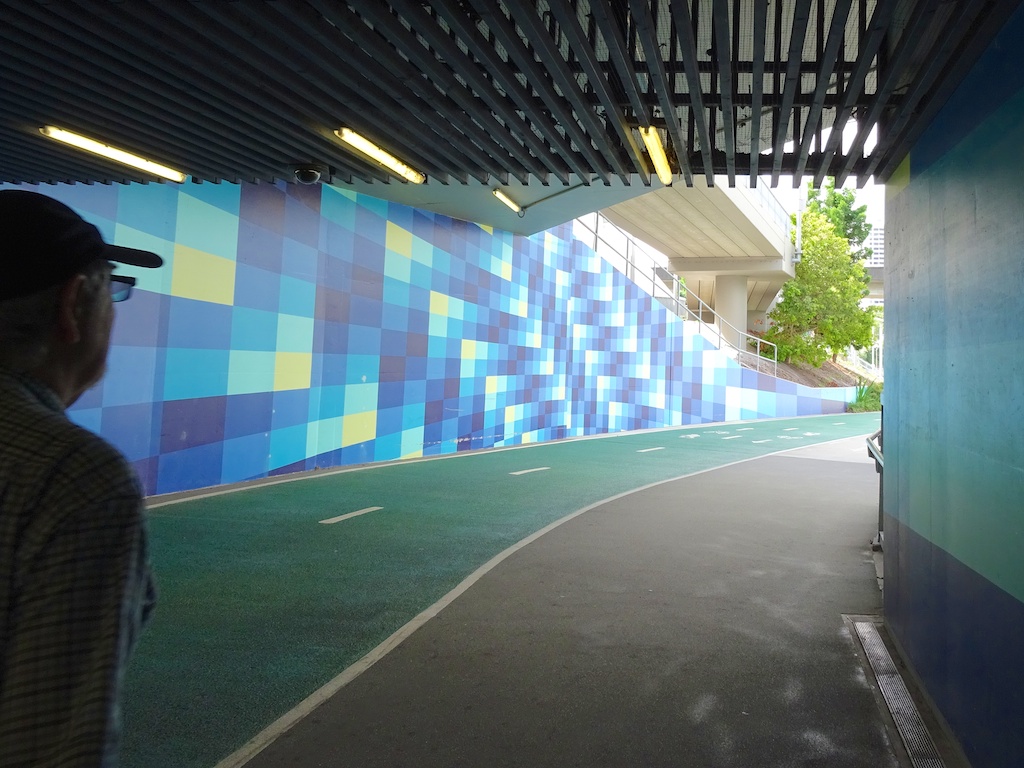 We walked under some of the bridges. This is 'The Go Between Bridge" and the newest of them too. It is named after a famous Brisbane Band. (Our daughter's sister in law played in the band for a while) 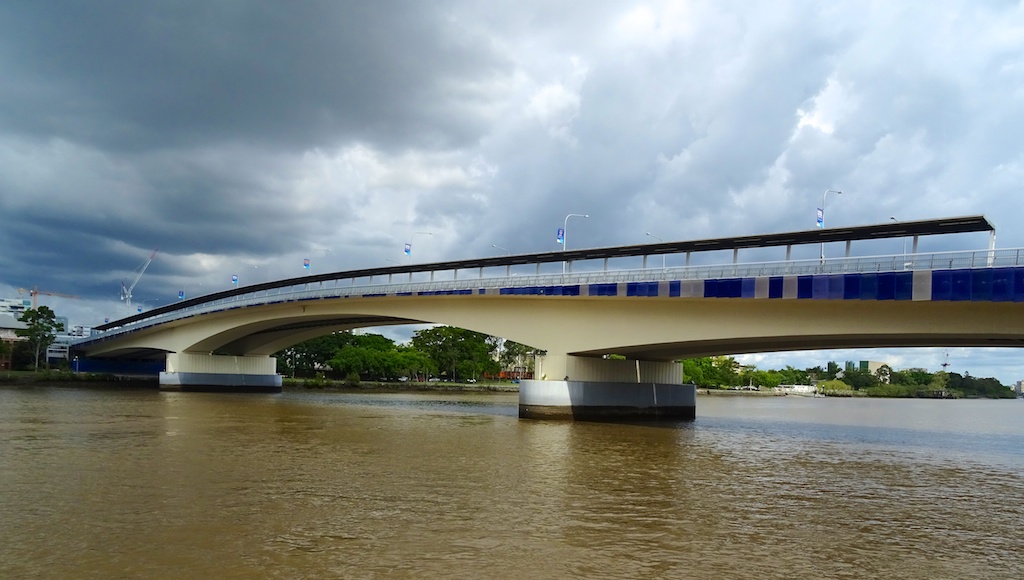 Looking back at the "The Go Between Bridge". It is a toll bridge for vehicles,pedestrians and cyclists. It was opened in 2010. The next bridge we walked under was the 'Merivale Bridge'. It is a double track rail bridge. It was opened in 1978. We waited for a train to come and not one but two came one in each direction.

On we walked, but it wasn't a fitness walk as we were always stopping for photographs. The next bridge we came to is the William Jolly Bridge. It was opened in 1932 and is a heritage-listed vehicular and pedestrian bridge. It looks pretty lit up at night. 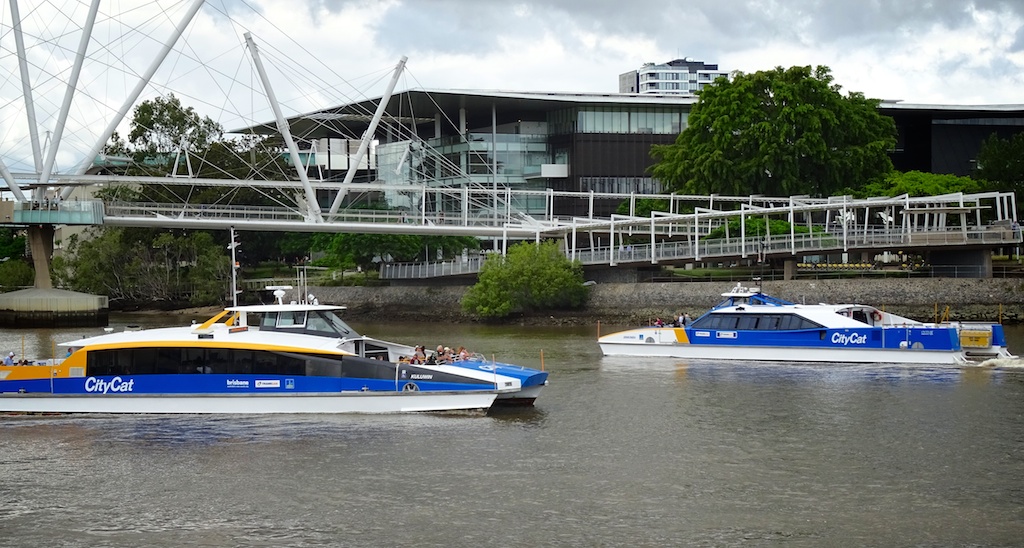 Our City Cat commuter ferries near the next bridge .

It is the "Kurilpa Bridge" but nicknamed the Fiddlesticks Bridge. It is a pedestrian and bicycle bridge and it was opened in 2009. The unconventional style caused a lot of controversy at first. You can see the wires better in the previous photo. I like it! Our walkway now goes underneath the "Riverside Expressway"opened in 1975. 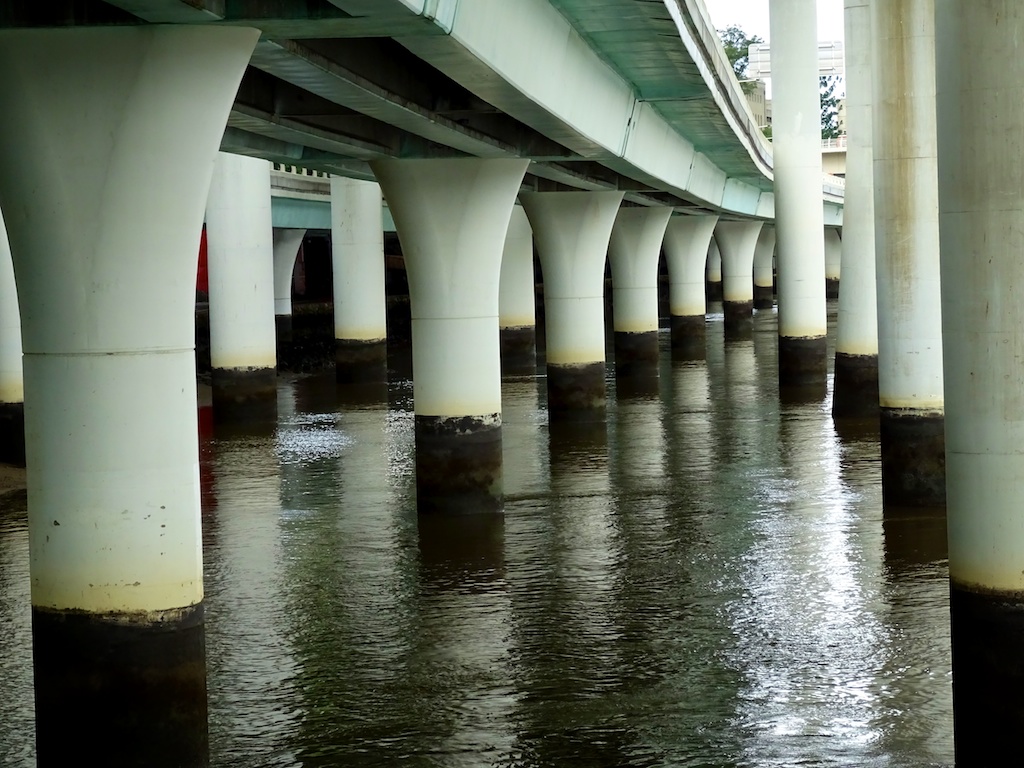 The last bridge for this walk is the "Victoria Bridge".  It is a vehicular, pedestrian and cyclist bridge. This bridge was opened in 1969 but it is the third bridge built on this site. The first was in 1865. It was a temporary wooden structure but finances failed and the iron one didn't go ahead. The timber one rotted and collapsed. In 1874 an iron bridge was built but in 1893 it was partly washed away by floods. A new one was built in 1897. In 1943 it started buckling under the weight of the trams and increased traffic. In 1969 it was demolished when the present one was opened. 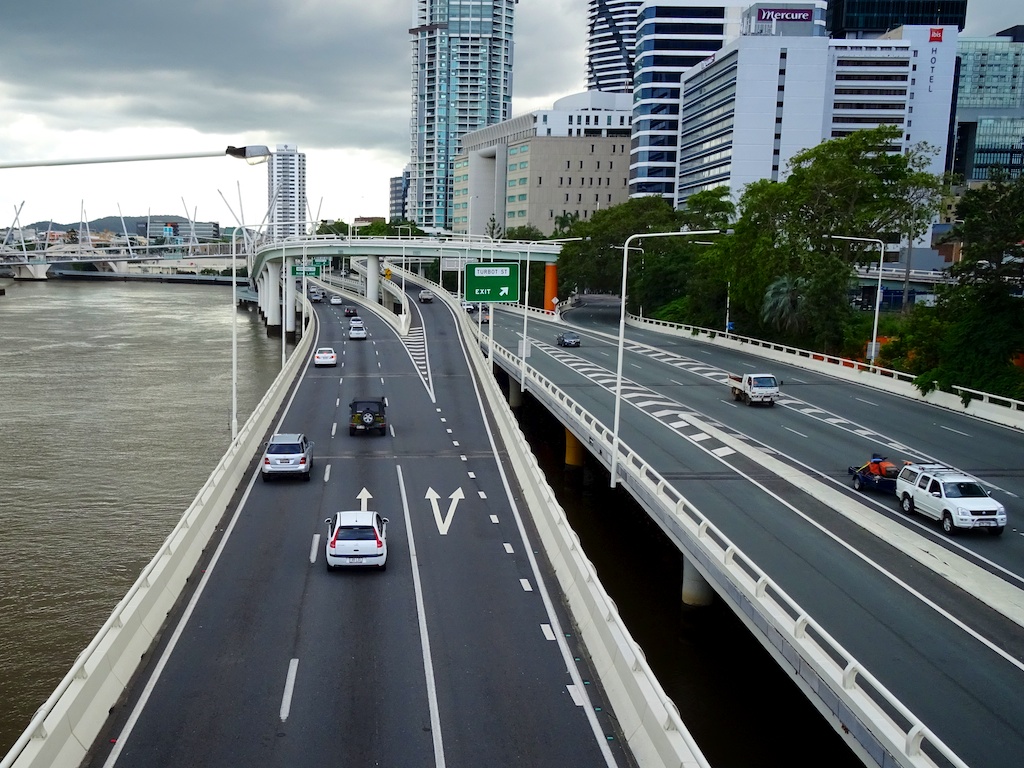 After stopping at the city markets (next post) we walked over the Victoria Bridge to the South Brisbane station for our ride home on the train. This is the expressway we had walked underneath. From the dates mentioned you can see that Brisbane is a fairly new city.
Posted by diane b

Email ThisBlogThis!Share to TwitterShare to FacebookShare to Pinterest
Labels: A Walk in the City, Brisbane, Brisbane city bridges.